KuCoin is a cryptocurrency exchange based in Hong Kong.

KuCoin is a cryptocurrency exchange launched on September 15, 2017. The platform uses KuCoin Shares (KCS) in a similar way to Binance. You get a discount on trading fees when you use KuCoin tokens.

Overall, KuCoin aims to be a more user-friendly exchange than traditional exchanges available today. The platform shares 90% of trading fees with users, for example. They also offer 24/7 customer service and generous referral rewards.

KuCoin has also been known for posting coin pairs before they hit other major cryptocurrency exchanges. The website features a list of coins scheduled to be added to the platform in the near future.

KuCoin advertises all of the following features:

Fast:
KuCoin claims that blockchain-based assets will be added to your account within 2 minutes of your transaction, with withdrawals completed in 10 minutes. 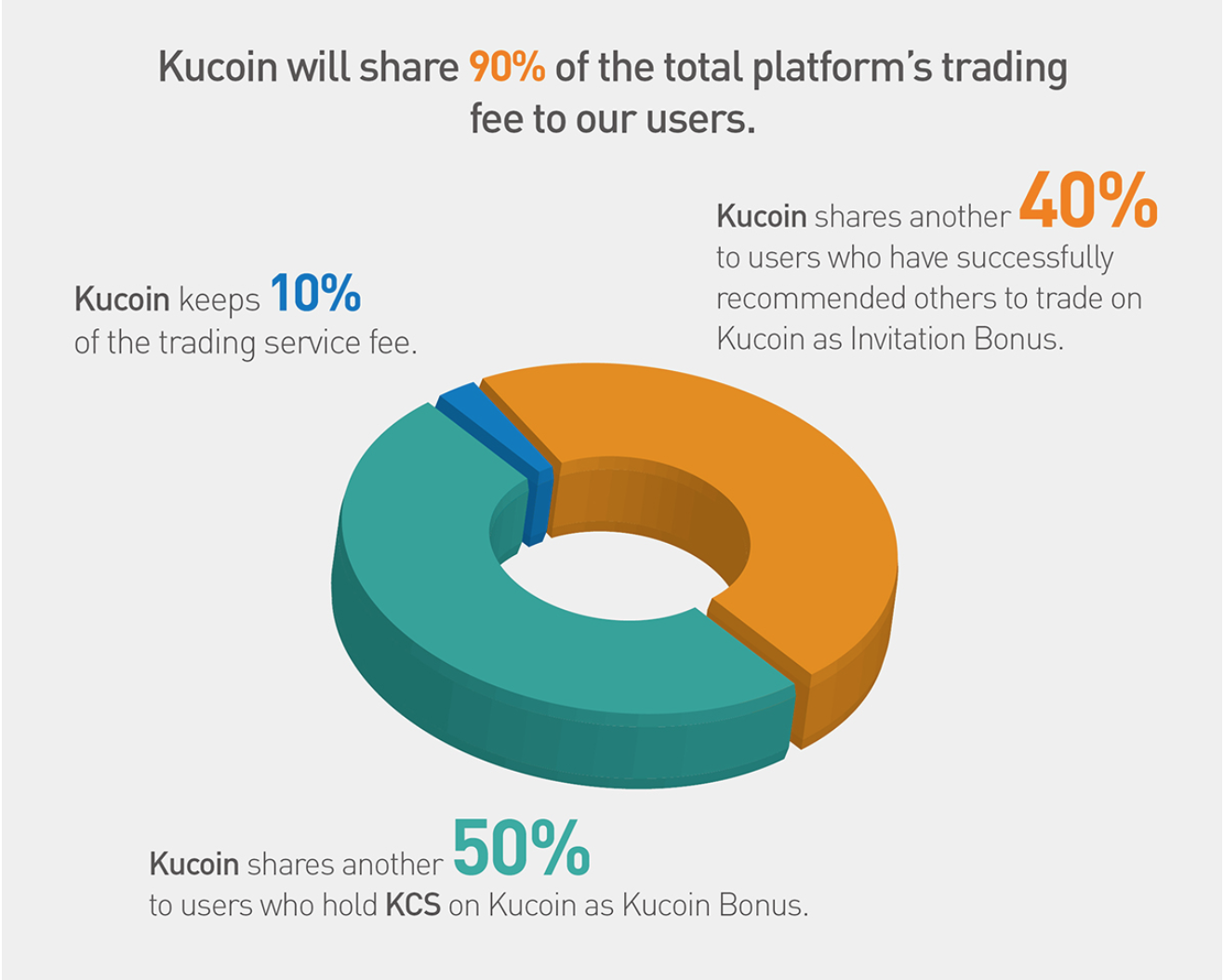 Referral System:
KuCoin has a referral system where it gives 40% of a user’s transaction fees to the member that referred them to the platform. Proof of Stake Bonus:
KuCoin shares 50% to users who hold KCS on KuCoin’s exchange. You also earn GAS daily for holding NEO on the exchange.

Quarterly Buybacks:
KuCoin will buy back KCS each quarter. It will buy back tokens using the 10% of profits collected from transaction fees. Buybacks will continue until 100 million KCS have been destroyed.

Mobile App:
KuCoin plans to release an iOS an Android app in November.

How Do KCS Tokens Work?

The tokens are ERC20-compliant tokens built on the Ethereum blockchain.

KCS tokens were distributed in three phases and portions. 35% of tokens (70 million) consist of the founders’ permanent holdings; 15% (30 million) were given to industry stars and angel investors); and 50% of tokens (100 million) are available on an open exchange for all users.

The tokens were available for purchase from KuCoin’s exchange started on September 2, 2017.

KuCoin aims to offer all of the following benefits:

Unique Operation Strategies:
KuCoin claims that its incentive policies “can sustain active users’ enthusiasm and make the business even more vigorous”. Their goal is to become one of the top 10 exchanges worldwide, and they believe their incentive and referral bonuses, among other features, will help drive that growth. KuCoin is a new exchange that just launched in September 2017. The exchange aims to offer a similar service to Binance, in that users can earn rewards in exchange for using the platform. KuCoin lets customers earn money by staking coins, for example. You can also get a discount on trading rates, or earn 40% commission by referring other traders to the platform. In total, KuCoin gives 90% of its trading fee to users, while keeping 10% for a token buyback fund.

The long-term goal of KuCoinis to become one of the top 10 exchanges in the world. To learn more about the Hong Kong-based exchange, visit online today at KuCoin.com

cryptocurrency kucoin exchange blockchain binance
3년 전 by yuz44
$10.43
32 votes
댓글 남기기 13
Authors get paid when people like you upvote their post.If you enjoyed what you read here, create your account today and start earning FREE STEEM!
STEEMKR.COM IS SPONSORED BY

Also there's a ref link, but apparently that's fine as long as you hide it with HTML.

Steemcleaners, please be different. If you're going to reward being shady with ref links, what's the point of calling them out when someone explicitly points out the ref link? Which is more honest?

And yeah, I know you're a bot, but IDFC

This wonderful post has received a bellyrub 2.75 % upvote from @bellyrub thanks to this cool cat: @yuz. My pops @zeartul is one of your top steemit witness, if you like my bellyrubs please go vote for him, if you love what he is doing vote for this comment as well.

This post has received a 30.00 % upvote from @lovejuice thanks to: @yuz. They love you, so does Aggroed. Please be sure to vote for Witnesses at https://steemit.com/~witnesses.

This post has received a 0.62 % upvote from @buildawhale thanks to: @yuz. Send at least 0.50 SBD to @buildawhale with a post link in the memo field for a portion of the next vote.

anyone have known the news about cryptopia for me they have done a good decision in freezing funds https://twitter.com/gan_chun/status/1085784119861116928

This Post Has Been Quality Verified By @steemthat Promotion Services. This post has received a 50.00 % upvote from @steemthat Return the favor and SteemThat Person Back: @yuz. The Minnowhelper team is still looking for investors (Minimum 10 SP), if you are interested in this, read the conditions of how to invest click here!!!

I really like Kucoin. It has a lot more coins than Binance. For example, XRB, ACT, KCS. Feel free to use my link: https://www.kucoin.com/#/?r=7PRdMh We will both get bonus.