I am giving away 4 CryptoKitties with this post. The parents of Guess that Kitten will go to the winner of Guess that Kitten. The Kitten will go to second place. Ties go to the earliest post. Like always there will be a Random Kitty Prize that can go to anyone who Follows, Upvotes, Resteems, and Comments with their CryptoKitties Litter Wallet Address. Congrats to
@steven-patrick who won the Random Kitty Contest. Enjoy your Kitty https://www.cryptokitties.co/kitty/142890 . 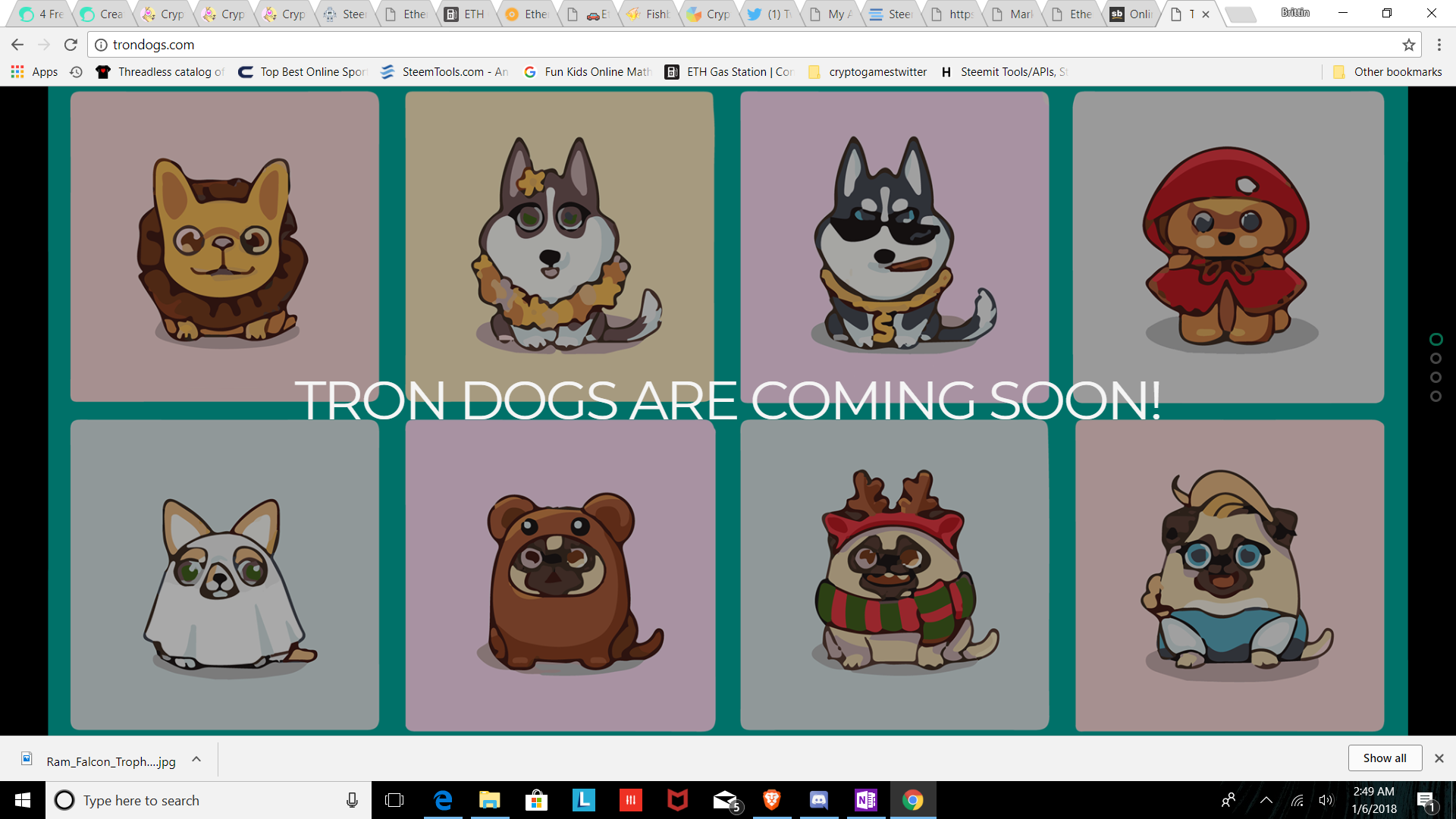 The Tron crazy has taken over and its making gas prices high. Doing anything on the network costs almost $2 right now so its hard to get a lot of kitty action. In fact, Binance Exchange (only one that trades Tron) is not accepting new registrations at the moment. Better believe when they go back online to new users, I'm buying some TRX Dogs. This may be bigger than CryptoKitties! What do you guys think?

State of the Litter Prices seem to be holding at higher levels due to the new Cattributes and the fact that not a lot of trading and posting is going on because of the high gas prices.

For tonight's Guess that Kitten, the lucky parents are https://www.cryptokitties.co/kitty/449375 and https://www.cryptokitties.co/kitty/446215 . What will the kitten look like?!? Guess below. The winner receives the parents of Guess that Kitten and the winner up get the Kitten. Ties go to the earliest post. Here is an example entry:

If your too lazy to do that, just follow, resteem, upvote, and comment with your CryptoKitties Litter Wallet Address!

I will give an update with the last post's Guess that Kitten winner.

Congrats to @hoopss who won Guess that Kitten with 3/8 Cattributes correct and receives both parents so you can now try and breed your own Phuziqaat. Nice job @bitton for the quickest 2/8 you win the kitten!

cryptokitties contest bitcoin fun games
3년 전 by brittuf77
$286.31
301 votes
댓글 남기기 77
Authors get paid when people like you upvote their post.If you enjoyed what you read here, create your account today and start earning FREE STEEM!
STEEMKR.COM IS SPONSORED BY

enter the contest and you'll get one

Hi man, I want to win a new cryptokitties. :)

Hey guys, thanks for this cute little giveaway. Here's my call!

It's a first timer for me, don't hesitate to explain tricks :-) thank you

Lol, we will have dogs now? I need to get one of those!

You are the best brittuf!!!

Love this game, check out my Kitties :)
https://steemit.com/cryptokitties/@davidconstantine/introducing-my-crypto-kitties

Haha yea its got me. I was up till about 2 am trying to navigate my way through that chinese site. Ended up with these beasts. Hi! I upvoted your post!! This is such a clever idea! I just recently started getting involved in cryptokitties and I am having so much fun with it!
I think the kitten will get the following traits:
Alien
Chartreux
Pouty
KittenCream
RoyalPurple
Salmon
TotesBasic
Chestnut
I can't wait to see what it is!

TRON (TRX) Dogs Will Give Cryptokitties A Run For Its Money, As The Chinese Year Of The Dog Approaches

Back in early December, the game Cryptokitties took off on the Ethereum blockchain. Within its first week, Ether holders spent over $3 million dollars on virtual cats. At one point, the game took over close to 25% of the total hashing power on the Ethereum network. Currently, the game has 251,292 total sales with $18,310,216.78 USD sold. The highest kittie that was sold was for 254 Ether and at the time-of-sale cost $110,707.16 USD, made on December 6th, 2017.

The game has since fizzled, dealing with scalability issues on the Ethereum blockchain. If that had been fixed before the launch of the Dapp the game would still probably be booming. However, a new game is set to launch soon with TRON (TRX) and China has some major crypto doggy fever. With the Chinese New Year slowly approaching, 2018 is the year of the dog and when word was spread about a potential cryptocurrency dog game, the cryptocurrency loving Chinese natives haven’t stopped posting about it since.

Not much information has been given in regards to the game, but from what has surfaced it is set to be very similar to cryptokitties. Owners will buy certain dogs, that will have different characteristics and the goal is to breed with other owner’s dogs to potentially breed a dog with “rare” characteristics. People pay to breed with your dog if it is unique and that’s how users make a profit. More details are soon to emerge on the game, giving exact gaming specifics, but what we do know is that it will be using TRX coins.

TRON’s founder has a rather impressive resume and is said to be the next “Jack Ma”, the founder of Alibaba. At just 27 years of age he: graduated from the University of Pennsylvania, was 2015 among Forbes China’s 30 under 30 and 2017 Forbes Asia 30 under 30, founder of Peiwo APP (China’s Snapchat), and former chief representative at Ripple China. No wonder, the Chinese are getting behind this new TRX-backed game.

You are able to trade for TRX on exchanges such as Liqui and Binance for either Ether or Bitcoin. Those who don’t own either of those coins can purchase them on Coinbase or Bitstamp and deposit them into their wallets on Binance. Binance is often used most for trades because it offers the lowest trading fees. We will continue to follow this story and update as more information is made available to the public.

Hey if anyone wants to enter my giveaway, here's the link. I'm just a minnow, so it hasn't gotten much action. I'm trying to use it to power up so I can have more voting power to give people like @brittuf for their valuable content :)
https://steemit.com/cryptokitties/@flaccidfervor/cryptokitty-giveaway

You got a 3.33% upvote from @upme requested by: @brittuf.
Send at least 1.5 SBD to @upme with a post link in the memo field to receive upvote next round.
To support our activity, please vote for my master @suggeelson, as a STEEM Witness

Thanks, if you wish please support me. ^_^

This post has received a 0.68 % upvote from @booster thanks to: @brittuf.

I have to collect now 😃

I can guess who the parent is but if you feel like doing charity to an idea less steemian please do. May God bless you also.

What is this crypto kitties about?

It's just a copy of cryptokitties.... I'm more interested in real projects like NULS than tron and their copy.

WOOooooooW! I hope to many cute kittis dear Thanks for sharing I follow you and up vote you hope your new posts will be good keep it up

Free vote for you! Yay!

I wonder what makes CryptoKitties so valuable. They apparently turned into CryptoCurrency themselves.

Thank you @brittuf for promoting this post together with https://steemit.com/budget/@jerrybanfield/introducing-steem-budget-proposals

i only heard about this crypto kitties and the dogs the other day at a BTC meetup. waht in the world is this about? and how does one get into it? are you buying Tron or there dogs?
this is really confusing to say the least, is it a seperate entity from cryptos? like a sub crypto or soemthing? its confusing

I want his kitty so bad!🐱
I actually didnt get it, you give away 4 kitties to one winner?

I wish those kitties will be as much expensive as BTC in the next 5 years :)

Hey! Im extremely new to steemit and just started with the cryptokitties last week! I will say it is a fun game but having some huge scaling issues. Hopefully it can be fixed soon so it doesn't lose the patience f the players.

Hi again man! I'm leaving no trace unattended to get a kitty from you.
Please make me feel lucky :D

Have a wonderful day mate!

Congratulations @brittuf, this post is the forth most rewarded post (based on pending payouts) in the last 12 hours written by a Hero account holder (accounts that hold between 10 and 100 Mega Vests). The total number of posts by Hero account holders during this period was 425 and the total pending payments to posts in this category was $16818.13. To see the full list of highest paid posts across all accounts categories, click here.

As a newbie here I need all the help I can get,thanks

Right on! your posts are doing great :-) Woot! Woot! Life is Good.
I'm way behind because of the holidays and feeling a little scattered. LOL
Big things are coming to add value to CryptoKitties to avoid the high gas fees, Just a matter of time.
Keep up the great work. Meow
800 + Billion in Crypto now, I can hardly believe it.
Kitty Litter --> 0x3217309e1937fd2a5fa72c3d92cb0498b5933ba9
Thanks

Thanks for the cat!

You got a 14.42% upvote from @postpromoter courtesy of @brittuf!

wtf is a crypto kitty

Followed, upvoted, resteemed and here is my address:

Wow free crypto kitties!
Hey does anyone have good
tips on crypto trading on this blog?
If so i'd like a tip i'm new!

Wow looks amazing man and your post is very nice