Are You Ready To Join The Fun?

For anyone that hasn't used it yet, DLive is a video sharing site where users can share live video, or recordings, and be rewarded via the Steem blockchain. This is an incredible leap over traditional streaming sites and looks to revolutionize the industry for the better. Not only can content producers make their content as they see fit they can also earn a decent reward for doing so.

When I first started streaming on this platform I would get so excited when a member of the @dlive team would stop in my stream and leave a comment and upvote. I was being recognized. It was better than Christmas even! That's because @dlive has a huge Steem Power delegation which gives them the opportunity to share their upvote across their content producers' streams and reward them very nicely.

Now that DLive is growing, by leaps and bounds, it's going to become harder and harder for users to be noticed like it was before. This occurs due to the market having so many great streamers available and thus it will become increasing easy for good producers to fall to the wayside. This is because any account only has so much voting power they can use daily plus there's only so much eyeballs can take in on one day.

Additionally it may become harder for new users to gain exposure on this platform outside of @dlive or large grassroots campaigns. That's because one of the tools that many use to increase their exposure on Steemit, bid bots, often blocks posts that are a part of /dlive/. While there are still many bots that do support /dlive/ posts there are certainly some larger players that still are refusing to upvote anything in this tag.

As I've been thinking about how this can be assisted, I came across @yabapmatt's development of the Community Bot. This community bot allows members to subscribe and receive a 100% upvote based on the queue of members who are enrolled. This seemed like the perfect fit to allow a curated group to subscribe to random upvotes and thus increase their visibility to not only the DLive team but also Steemit in general.

After testing this software for a couple days I decided I would try to take it live. I have personally delegated 1,000 STEEM POWER to @dliveupvote to help jump-start the value proposition the bot can bring to content producers. I will also be powering up any STEEM that is sent to the bot to help increase it's power.

The Way It Works

The software currently waits until @dliveupvote hits 100% voting power. Once that has happened then it looks at the list of members and goes down and gives a 100% to the next member in line. If that post has already been upvoted then the software will move on to the next member that has a new post available and makes an upvote on their post. Once it has made an upvote it will wait until voting power has restored and then restart the process with the next user.

How Do I Get Started?

There are 3 main ways you can become a member of the @dliveupvote bot. In the next few paragraphs I will show you how you can use one of these methods to start getting an upvote from @dliveupvote.

The preferred method is for members to delegate 204,000 VESTS (~100 SP) to join in. This allows us to grow our SP delegation and give each member a larger vote when it's their turn through the voting. From there you will remain a member until you change your delegation. This all happens without you ever actually parting with ownership of any Steem but gaining the benefit of new votes.

The easiest way to delegate is to take the following link and replace youraccount with your actual Steemit username:

Using the example above, if I (@patrickulrich) wanted to delegate the URL would look like this: Note: Steem delegations are immediately credited to the delegatee's account. You may undelegate your Steem at any point but you will not regain your delegated voting power until 7 days after you stop delegating. This is a part of Steem's security features and is not controlled by @dliveupvote. Undelegating your STEEM ends the life of your membership and requires another delegation or change of method for membership to continue.

If someone does not want to delegate Steem Power to the community then they can also transfer 5 STEEM to @dliveupvote. This will enlist them on the membership voting for a 30 day period. 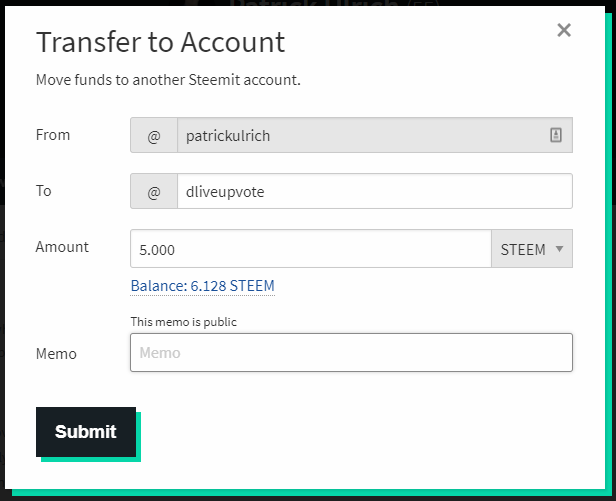 Note: The bot only accepts payments in STEEM. You can not pay for a membership with SBD. If you send SBD we will try to refund you but it may take a few days. Please only send 5 STEEM for payment. Anything over will extend your membership past one month and can not be refunded.

Alternatively there's an in-between option where someone may delegate 102,000 VESTS (50 SP) and pay 2.5 STEEM for a 30 day membership. If you go about this method then you will want to ensure you continue paying your 2.5 STEEM each month or you will not retain membership.

While @dliveupvote is intended to be used for @dlive content it will certainly upvote anything on the Steem blockchain. This means that when it's your turn to get a vote and your most recent post is a new picture on Steepshot then that's what the bot will decide to upvote. Because of this we feel we have a duty to help maintain control of the rewards pool. This means we will attempt to monitor our upvotes and if we find members are actively posting SPAM or SCAMS then you will be BANNED! We do not want our vote to be used as a tool for users to make money on or defraud others from their money. This is intended to help new users join a program that will hopefully give them larger exposure and votes along the way.

Please join us on Discord to discuss any issues you may encounter while using @dliveupvote or if you have any questions. Additionally please report any questionable member content in our #dliveupvote-content channel.

I'd like to personally thank @yabapmatt for all the effort he made in developing this bot. Please consider giving your vote for witness to @yabapmatt for all the hard work he's put in. Additionally I'd also like to thank everyone that's been involved in the @dlive project and Steem in general. It's your platform that has allowed all of this to be built. Finally I'd like to thank each of you. Without you making the great content you do then there would be no reason to implement products like this in the first place. I hope each of you will continue doing your special streams every day!

dlive bots community dunite dlivestar
3년 전 by dliveupvote44
$34.53
26 votes
댓글 남기기 16
Authors get paid when people like you upvote their post.If you enjoyed what you read here, create your account today and start earning FREE STEEM!
STEEMKR.COM IS SPONSORED BY

This post is no longer valid and the Community Bot instance is not running. This account is only used for upvoting posts within #dlivecommunity and those generated by members of @dlivecommunity. If you would like more information plase join us in the Discord at discord.dlive.community.

This seems like an interesting idea. It will be cool to see how it plays out :D

As always, if your ever in need of any assistance, just let me know!

Thank you @clasicktv! I appreciate the support and hope it helps some other minnows out there.

I love seeing these initiatives started by the community.

@jimmylin I'm excited to get started with it. Please let me know if you have any suggestions!

Let me know if you have any questions @seacactus. Thanks for stopping by!

Congratulations @dliveupvote, this post is the third most rewarded post (based on pending payouts) in the last 12 hours written by a Newbie account holder (accounts that hold between 0.01 and 0.1 Mega Vests). The total number of posts by newbie account holders during this period was 3519 and the total pending payments to posts in this category was $1861.50. To see the full list of highest paid posts across all accounts categories, click here.

Im going to become a member as soon as i can

Thank you for your support @ps4gamer! I've gone ahead and sponsored your membership for a month. Let me know what you think!

Thank you! I supper appreciate that brother! I will definitely return the favor as soon as i can and plan on renewing it every month.

Much appreciated man! I look forward to catching some streams!