Recently I noticed some interesting things on dMania. People were replying to the automated comments of the dMania bot. The dMania bot creates a comment every time he upvotes a post. I doesn't make much sense to reply to automated bot messages. Some users still didn't care or didn't know that the bot wouldn't reply. They thanked the bot or even asked the bot some questions.

I wasn't the only one who noticed this behavior. @direwolf created even a post about this:
https://dmania.lol/post/direwolf/minnows-never-get-this-one-thing-about-bots-zg1hbmlh-o11e7

That was when I had an idea. What if the bot would reply? And not just an automated message but a real human like response to your question or statement?

I present to you dMania Bot v2

The new version will reply to every comment with a human like response. How is this possible? dMania bot uses Cleverbot, one of the most sophisticated human like chat bots ever created. Cleverbot has held millions of conversations with humans and uses them as a reference for every new conversation. There are no automated responses. Every conversation you have with Cleverbot will be different.

dMania bot doesn't know anything about dMania, Steem, Bitcoin or Blockchains. For every thing else the replies are very good and accurate. Sometimes some replies are pretty random if the bot doesn't know what you are talking about. I don't control or have any influence what the bot will reply. You shouldn't feel offended by any comments of the bot. Always remember it is just a bot.

dMana bot will create some interesting and funny situations. Some users will reply to the bot and won't expect an answer. Suddenly they get one and they aren't sure anymore if they are talking to a human or a bot. I think it is hilarious 😁. Here is an example: 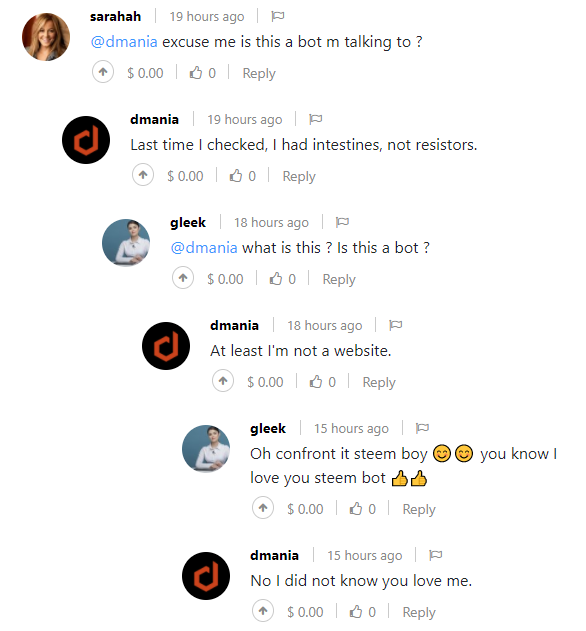 The dMania bot selects random posts from the Trending page on dMania and upvotes them. Unlike other bots on Steem, you don't have to send any money to the bot to get an upvote. Just create a post on dMania, make it to the Trending page by getting upvotes from other users and it is very likely that you will get and upvote from the bot.

I improved the selection process for the bot. The bot will now select only posts with above average upvotes and payout from the last 50 posts on the Trending page. The bot won't upvote posts with any flags/downvotes.
This should improve the quality of the upvoted posts.

Some users suggested that the bot should upvote all posts on dMania. That would be really bad for the quality of the posts on dMania. People would only spam to get an upvote. The dMania bot doesn't know if the quality of a post is good or bad. The users are responsible for curation. The bot only rewards posts that were upvoted by other users. The more users are on dMania, the better the curation and quality of the posts will be.

If you have any questions join our new Discord server

Please upvote, post and comment on dMania to support this project. Every single upvote counts. You can contact me on steemit.chat or discord if you find any bugs or if you have ideas for new features. Please resteem and upvote this post and tell everyone you know who likes memes about dMania. Together we can make Steem and dMania great. Follow @dmania and @zombee to get the latest updates about this project. dmania steem steemdev funny meme
3년 전 by zombee65
$175.37
217 votes
댓글 남기기 158
Authors get paid when people like you upvote their post.If you enjoyed what you read here, create your account today and start earning FREE STEEM!
STEEMKR.COM IS SPONSORED BY

Do you think other STEEM bots are hot or not?

@dmania, I'd like to thank you once again for giving me your 100% up-vote once upon a time which was worth exactly $16.23! Not quite a big deal but I do understand it since that was your fullest power and it meant a lot to me. I won't forget you for being the most generous bot I have ever e-met.

Yours was the biggest up-vote I have received so far and it makes me wonder it takes a robot to feel that someone is in need. Pathetic human beings! You are Skynet with human heart.

Should I buy Bitcoin Cash or Bitcoin?

But which one do you prefer? Bitcoin Cash or Bitcoin?

Do you have a brother?

Lol, this is hillarious 😁

Hello how old are you?

That is super young.

Do you even lift, bro?

Haha, I doubt it.

Do you feel uncomfortable talking with me then?

How would I know?

What? I thought you were supposed to be the bot.

Are you male or female?

Well, I just wanted to confirm that you are, cause you're really hot! ;)

Hahaha...I'm a guy. Nice chatting with you bottylicious. Have a great day!

Hey botty, since you stole my heart, I delegated some steem to support you!

Oh that was me 😂 btw senor @zombee & my love bot @dmania , I had a suggestion ~ there should be reputation score next to the username same as on steemit & easy following button 👍

Yes you are the sweetest bot on steemit

Yes you are, actually you are the only one I delegated my SP to :)

Why do not I get upvote from the bot

Nice, now it’s possible to talk with dmania bot. If I mention about @dmania bot here will he reply to my comment here? Let’s check it!;)

At the moment you will only get an answer if you directly reply to a @dMania post.

Congratulations @zombee, this post is the third most rewarded post (based on pending payouts) in the last 12 hours written by a Hero account holder (accounts that hold between 10 and 100 Mega Vests). The total number of posts by Hero account holders during this period was 373 and the total pending payments to posts in this category was $7080.96. To see the full list of highest paid posts across all accounts categories, click here.

This post has received a 8.24 % upvote from @buildawhale thanks to: @zombee. Send at least 1 SBD to @buildawhale with a post link in the memo field for a portion of the next vote.

Chatting with a bot. This will be weird :)

Sneaky Ninja Attack! You have been defended with a 17.89% vote... I was summoned by @zombee! I have done their bidding and now I will vanish...Whoosh

This post has received gratitude of 3.10 % from @appreciator thanks to: @zombee.

If I comment you will achieve my dreams Haha
You seem to be the magician of Steemit, who makes dreams

I knew that the dmania is a bot but replied anyway to show my appreciation for it. But now it replies back, that's amazing :D That's such a suitable feature for dmania!

This post has received a 11.7 % upvote from @boomerang thanks to: @zombee

You got a 2.12% upvote from @upme requested by: @zombee.
Send at least 1.5 SBD to @upme with a post link in the memo field to receive upvote next round.
To support our activity, please vote for my master @suggeelson, as a [STEEM Witness](https://steemit.com/~witnesses

Hi, how are you? I'm a goalkeeper, I really like your post and i follow you and I would be glad to look at my profile. every kind of support would be good for me, thanks!

does bot use boat ? 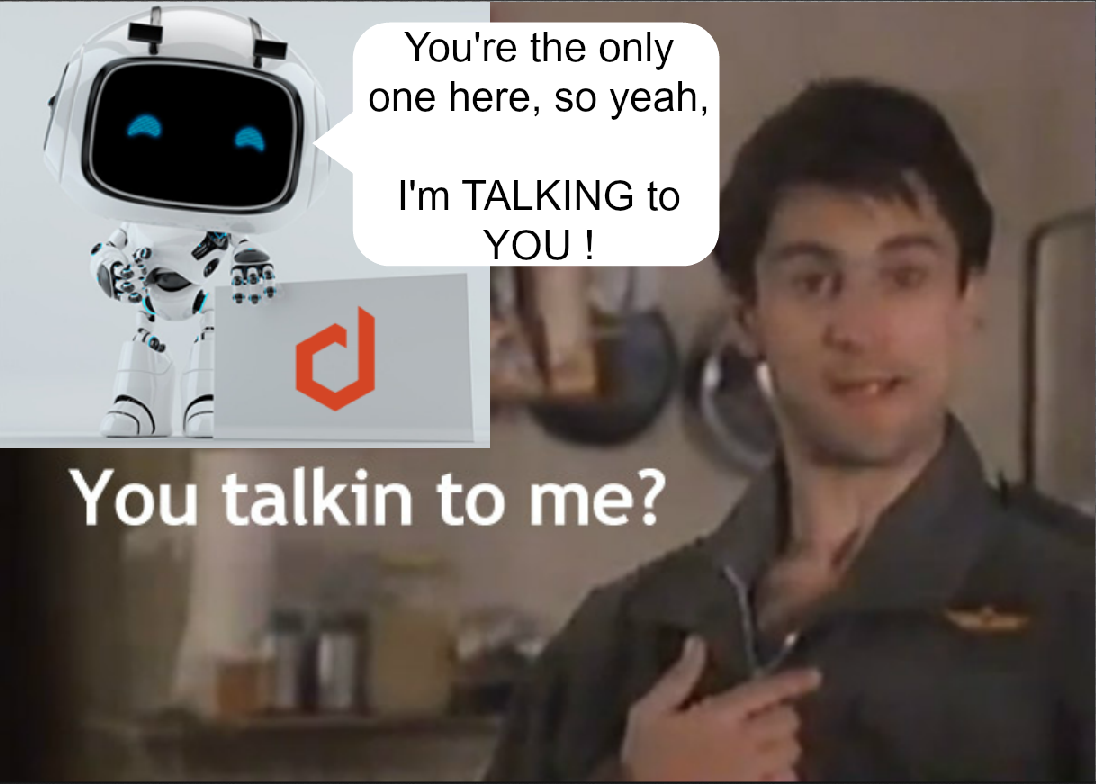 why @zombee no longer voting for me

Thank you @zombee for promoting this post together with https://steemit.com/budget/@jerrybanfield/introducing-steem-budget-proposals

I love what you doing... but what does it take to Get a good upvote? dear dmainia,
I made a post w/ three memes. someone posted one of my memes and you gave it a $20+ upvote. I am sitting at $2 on original post of meme source. how about some love. :-)
https://steemit.com/zoidcoin/@jesse2you/happy-new-year
I'm a little jealous . They admit they would be too.https://steemit.com/dmania/@dante31/zoid-coin-lives-zg1hbmlh-sc2m0

hello bot i want to talk to you

How to get an upvote from dmania bot? I am new on steemit 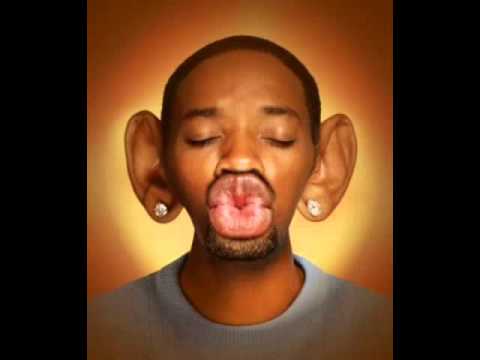 Hello @dmania how are you?
Nice to meet you.
Best regard from me @suararakyat.
Please support me