Study of a strawberry, in two styles. 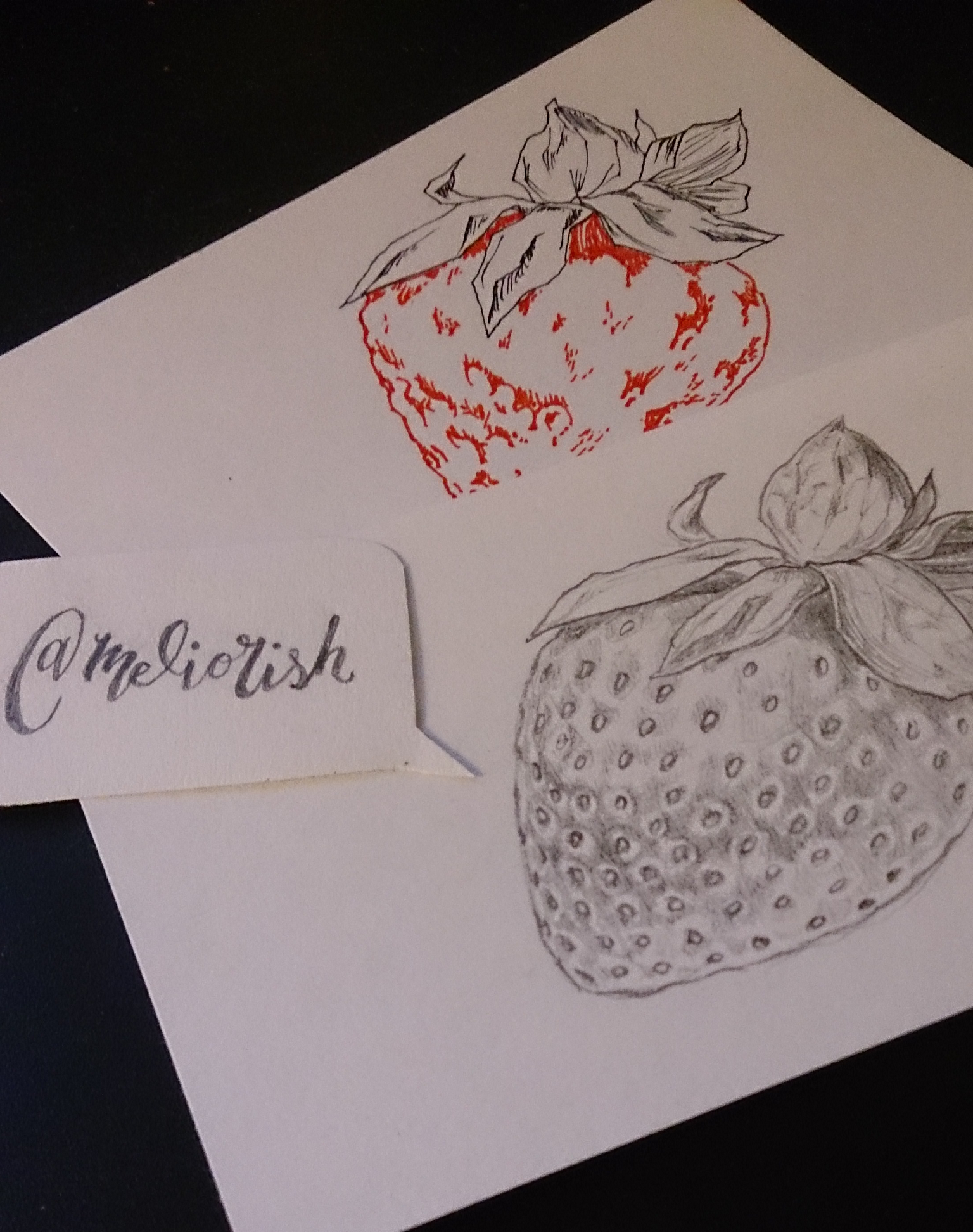 The strawberry's popularity is pretty much unrivaled.

I can't say I particularly love to eat them, but they do have a unique appearance. I do like strawberry flavoured sweets though-- especially hard candies and milkshakes. A short while ago, I made a batch of jam from fresh strawberries. I used only a pound of fruit to make just enough jam for my family to enjoy on some toast and waffles for a few mornings in a row. It was very easy to make, and spreads remarkably well for a jam with no gelatin or pectin added!

The thing about making strawberry jam in February though, is that right now, most strawberry plants in Canada are still buried under a foot of snow. The strawberries I bought were shipped in from somewhere farther south, where it's much warmer. I really dislike these huge, watery strawberries that supermarkets tend to carry, but since it's currently impossible to get local organic strawberries, I had to make do. I picked a box of the most attractive strawberries I could find, and as I was washing them, I noticed a few that were so perfectly picturesque that I thought it would be a shame not to take a few photographs. The lighting was quite poor in this photograph, but it would do as a drawing reference. I did these drawings on index cards at a cafe during some spare time, so I took fewer progress photographs than usual, but here they are: 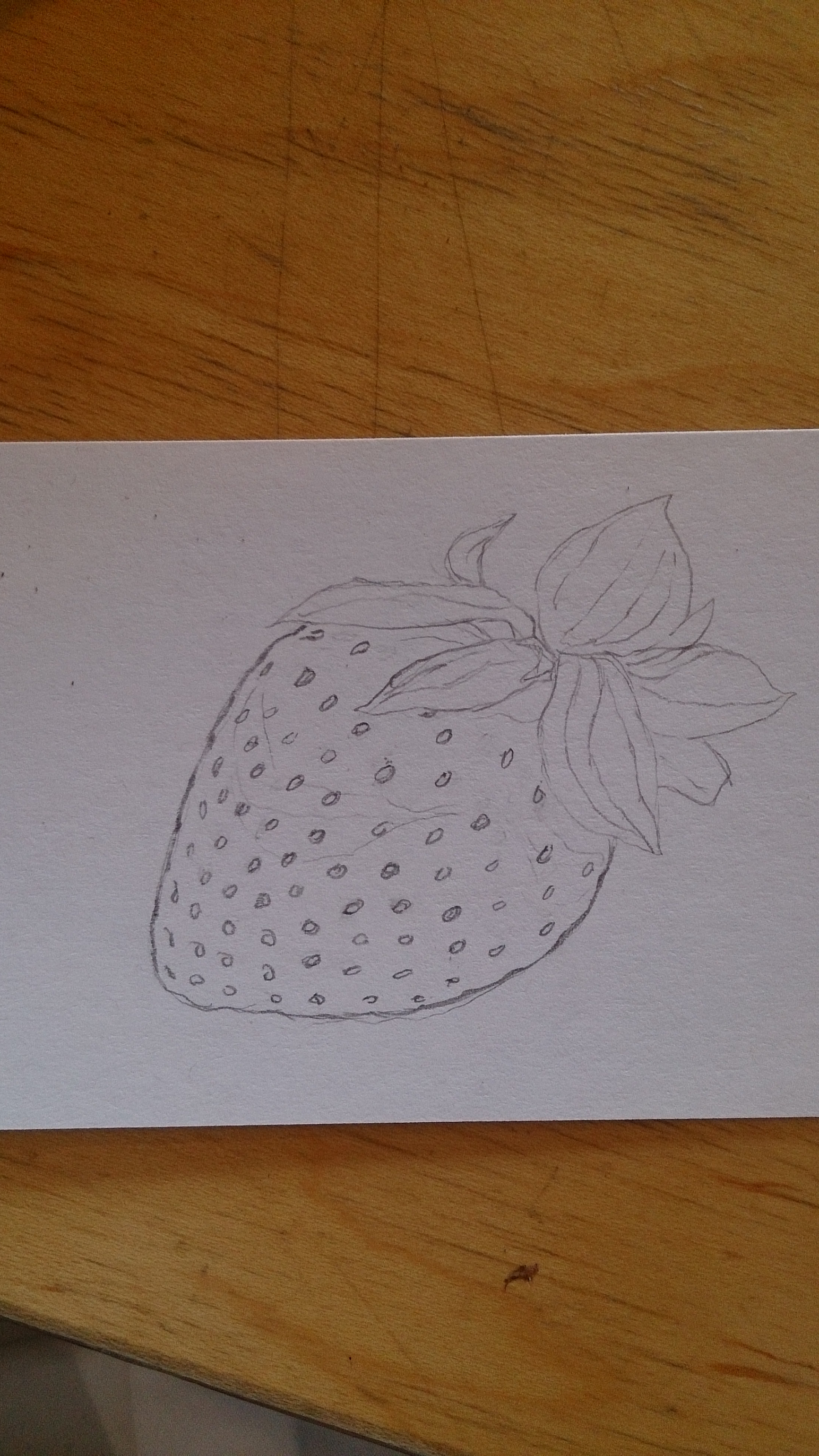 My starting process was, as per usual, a simple pencil outline, followed by as many details as I saw fit. In this case, the strawberry's seeds were my primary concern. Drawing each individual seed was incredibly time consuming and challenging. The seeds are oriented such that they point towards the tip of the strawberry, and capturing this orientation, as well as their overall spacing, is the key to creating a three dimensional effect. I also lightly drew in where I planned to shade the darkest, so I could have a general shape to keep in mind as I began shading. Shading was almost as tedious as outlining. Each seed was slightly sunken in to the flesh of the berry, creating a shadow around it that I had to account for. There was also the matter of making sure the shading was darker directly under the leaves, and lightest where the strawberry was most rounded. In the above picture, I had gone over the whole body of the strawberry with my pencil, filling in all the tiny little seed pockets, but the berry did not look particularly rounded. This was because I hadn't put any particular emphasis on any part of the strawberry yet. 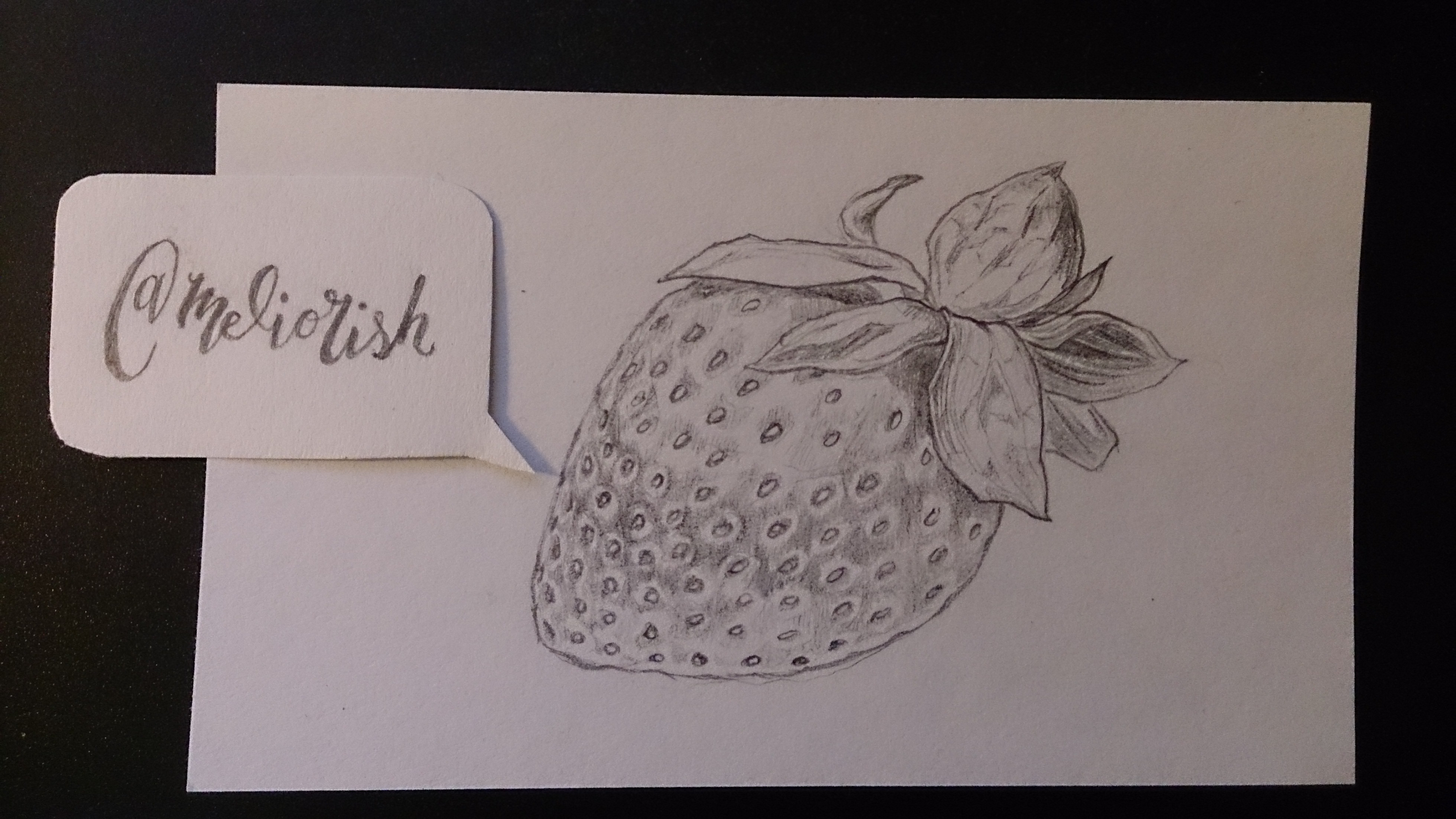 Emphasizing the area that I had marked earlier in my outline was the last step. This really made the strawberry feel more solid and three dimensional. Satisfied with my strawberry study, I contemplated drawing another from one of my other photographs, but then decided to try something different.

I drew the same strawberry, this time in a rather different style. I had two fine-tipped pens with me, and wanted to try capturing the strawberry's texture with them. The result was... satisfactory, for an experiment. I felt that trying to draw each individual seed with the pen would only cause a mess, since I essentially had no control of the saturation of the colour, so I left much of the strawberry blank. Being more used to using pencil gradients for shading, I was somewhat at a loss for which parts of the strawberry to best emphasize. I will also mention that this strawberry took me a fraction of the time spent drawing the other one, so it was quite nice as a cooldown exercise after the concentration-intensive study I had just completed. Here is a comparison of the two illustrations: Nervous laughter... I don't know how I feel about putting these two images side by side like this. I'm almost a little bit reluctant, but I thought it might be interesting to share my learning process. Anyway, whether you like eating strawberries or just looking at them, I hope you enjoyed my artwork!

drawing sketching art illustration blog
3년 전 by meliorish53
$0.89
9 votes
댓글 남기기 6
Authors get paid when people like you upvote their post.If you enjoyed what you read here, create your account today and start earning FREE STEEM!
STEEMKR.COM IS SPONSORED BY

Strawberry with chocolate is the best 😍
Nice drawings. It looks tedious to draw a strawberry
Good job!

One lucky strawberry! 😄 I enjoy them when fresh sprinkled with salt with that little crunch with my every bite.

Oh, interesting! I've never had them with salt before. I'll have to give it a try sometime!

yes i really enjoyed your work... it's different that why it's enjoyable. 👍

Thank you! I'm glad you think so!

Congratulations! This post has been upvoted from the communal account, @minnowsupport, by sk from the Minnow Support Project. It's a witness project run by aggroed, ausbitbank, teamsteem, theprophet0, someguy123, neoxian, followbtcnews, and netuoso. The goal is to help Steemit grow by supporting Minnows. Please find us at the Peace, Abundance, and Liberty Network (PALnet) Discord Channel. It's a completely public and open space to all members of the Steemit community who voluntarily choose to be there.