Recently, I've examined and criticized the industrialization of pork agriculture. As to not neglect other mammals, I'll be examining trends in cattle next. This post concerns cattle raised for beef.

I examined data from the US Census of Agriculture on beef farms by farm size, which spans from 1997 to 2012. 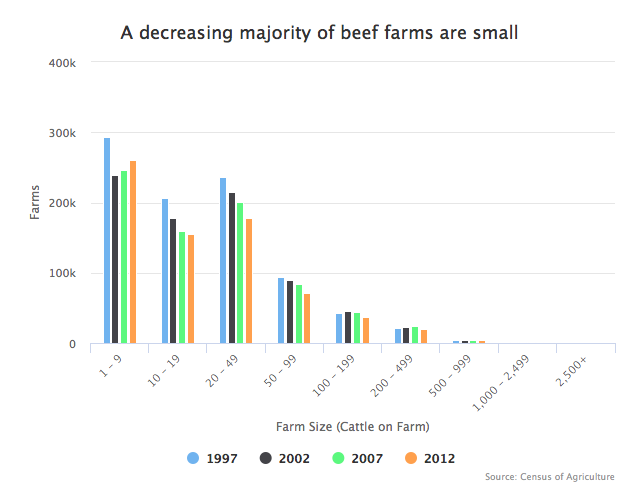 Most beef farms are small, but their number seems to be decreasing. All of these farm counts have decreased since 1997, although the amount of farms with 1-9 cattle has increased since 2002. Since a definition of cattle factory farms focuses on cattle in feed lots, I do not think that this data is necessarily informative of cattle in factory farms. While the similar data set on hog farms shows a dramatic trend of industrialization, the beef cattle data does not tell the same story. Up next: dairy cattle.

education agriculture programming statistics sndbox
5년 전 by somethingburger57
$8.37
18 votes
댓글 남기기 0
Authors get paid when people like you upvote their post.If you enjoyed what you read here, create your account today and start earning FREE STEEM!
STEEMKR.COM IS SPONSORED BY