Hey steemits its that time where we talk electronics and today, being the first post , i would like to talk about the basic concepts that come up when talking about electronics. This basic concepts are like the languages of electronics. So without further talk lets jump right into it

1.VOLTAGE
Well you might have heard of this one a lot ,and for very good reason.
Voltage is defined as the difference in potential that exists between two points electrically. Why voltage is so important is that in electronics its the most common form of rating used and also because its is what we are going to be using to measure the source we are going to use to power our circuits. For an analogy think of voltage as a tank full of water and an empty bucket. The tank containing more water is said to be at a higher 'potential' or has more potential to fill the empty bucket than the bucket to fill the tank. The difference in potential of this two buckets is usually called voltage.

2.CURRENT
This is another important concept. But before we go on, think of current as the water that flows out of the tank in our above illustration now replace the water with electrons and just like that you have defined current! But for a more comprehensive answer . It is seen as the movement of electrons in a given direction leading to electricity. Note that this movement causes electricity. Also current is the cause of some of the deadly accidents that happen even in electronics i.e. electric shocks, lightning strikes, and so on. Thus i strongly advise strong care be taken when dealing with high current sources. 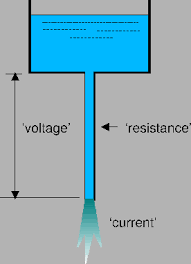 Thank you for your time and i hope you join me for my next post. Stay electrified

electronics trending steemiteducation steemstem
4년 전 by chitrics35
$0.02
3 votes
댓글 남기기 1
Authors get paid when people like you upvote their post.If you enjoyed what you read here, create your account today and start earning FREE STEEM!
STEEMKR.COM IS SPONSORED BY

Congratulations @chitrics! You have completed some achievement on Steemit and have been rewarded with new badge(s) :