Why block chains are ruling & what EOS brings

Bitcoin is 9 years old. Ethereum is 4 years old.
They introduced tremendous amount of innovation and shifted countless paradigms, and still they are shifting the world into a better place.

Why is block chain a savior of enterprise?

In traditional computing, each company, has to secure their machines, make sure their servers are running all the time, make sure the software is bug free, make sure you have enough resources to run the code, write software and API to interact with outside world, upgrade systems and software when the time comes, making sure the updates actually does not bring other bugs, hire programmers and IT staff, deal with source code protection and debugging, catching up with technology and educating your staff, handling denial of service attacks and handling anti virus software.
If you think about the complexity, it is pretty hard for a company to operate without failure. There are multiple ways the systems can fail. You have to put boundaries between companies, software, servers, people, firewalls to protect them.
IT personnel pray in front of servers before they go to vacation.

What happens with block chain, why is it so efficient?

Every machine is 'open' to outside world, you actually run other people's code in your servers. Nobody wants to attack to a single server because there are thousands other servers that survive.
You don't have to debug your transport layer software, your storage infrastructure, you don't deal with how to distribute data. You just have to debug your application logic.
You can launch several machines around the globe running a block chain platform, presumably bugs are handled by pretty good coders already, you just focus on your top application layer.
If one of your machines are attacked you can immediately switch to another machine and resume without much interruption.
Less API is necessary because everybody on that same block chain is running the same language and data structure. This mean less man power going to software that just interacts with other software.
The most precious thing that you have to protect is your private keys.
If you protect the private keys, you are ok thanks to mathematics, block chain consensus is basically applied mathematics.
Fortunately math laws does not change troughout the universe.
In a sense relying on math to protect ownership, and sharing the rest, makes everything simpler and more efficient.

State of the programmable chains

What Ethereum did was taking bitcoin's consensus algorithm and add a virtual machine on top of it. That machine allowed not just money to be transferred, but also programs, values and tokens.
Like bitcoin, Ethereum's machine has to be run on every node.
This makes it extremely inefficient. The same code running on a single thread is run on tens of thousands of machines, consuming electricity.
This has still great value, that means tens of thousands of confirmations for the code.
Together with the code each miner also has to find the 'nonce', random bits, to be rewarded. And trying to find those random bits that achieve certain conditions, resulting in a reward, wastes electricity.
What if we could get rid of that loss, and move to another philosophy, where you basically put your money where your mouth is (in this case your mouth is your machine's outputs).

What EOS wants to bring

Instead of running in single thread mode, now server farms can run the codes.
Producers who are authorities to run the code, determined by the stakes on EOS ecosystem, can now launch farms of servers each having several cores.
One producer runs all the code for 3 seconds. The other producers wait for their turn, but still watch and verify the active producer.
If the producer owns n machines, n of them can work at the same time for 3 seconds.
Then the next producer and its machines take over.
Current design makes the network as slow as the active producer for 3 seconds.
If the active procuder for example only has 1 machine then the other larger pools of servers are not utilized in the most efficient way.
But there is a probabilty that community selects bigger server farms.
This will basically allow code to be run in parallel, and since there is no proof of work consensus this will be a few orders of magnitute more efficent than current programmable chains.
There could be an improvement in a future version, I don't know how possible or feasible it is, letting several of the producers run at the same time, and the other bigger set of producers to verify/witness what is going on. This can potentially bring another scalibility dimension.

Those are just technical innovations it brings. There are also governance, ease of use for end user, upgradibility of code, planning for the bugs, all kinds of neat stuff which deserve their own posts. 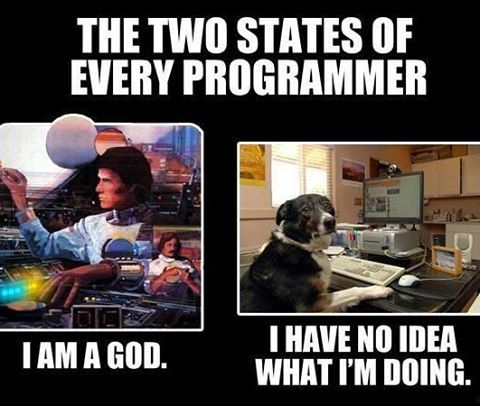 Being fanatic in anything does not help anybody in the long term. If you are in tech, you have to be embracing cutting edge technology, otherwise you are not making use of your full potential.
You can research newer tech and learn about it, predict the future of where the industry is going and just turn your ship towards that direction and let the wind help you.

Overall, I am pretty bullish about the EOS project.
I think it will shift the whole paradigm once again!

eos blockchain bitcoin ethereum tech
4년 전 by deaddy50
$1.10
15 votes
댓글 남기기 4
Authors get paid when people like you upvote their post.If you enjoyed what you read here, create your account today and start earning FREE STEEM!
STEEMKR.COM IS SPONSORED BY

Just some notes:
EOS makes explicit tradeoffs for speed in the form of security. This is OK. People go on and on how EOS is going to kill Ethereum and it will be the one blockchain to rule them all. WRONG.

There is no blockchain to rule them all, there will be many chains - each providing their own tradeoffs. Some will run on EOS, some on ETH and some on a blockchain we have yet to design.

See my post below how some of the key features of EOS, like free transactions - payed by the developers, are possible on other blockchains like Ethereum:

Yeah there is room for everyone. Look at bitcoin. People are still using it.
Thanks for the heads up regarding free transactions.

Congratulations @deaddy! You have completed some achievement on Steemit and have been rewarded with new badge(s) :