Hi everyone, it looks like Cryptocurrencies have staged a nice come back to more steady levels before the most recent sell-off. And I for one am grateful. I made some money/profits….For those that had the courage to buy in the downturn….WELL DONE! You should have seen doubled your capital. As a recap, Ethereum had hit as low as mid $400s, and now is back at high $700s. Bitcoin hit the low $6,000 before now touching almost $10K. And Litecoin has managed to bounce from $115 to $180s. All this to say, that markets are volatile. And if you believed in the long term case for Cryptocurrencies you were rewarded for the courage to buy when everyone was selling.

My only advise is that, you should look to trim some of your positions. Take some profits and pocket it for another time when markets get crazy again…because they will. How much you profit/chips to take off the table is up to you but for me, I’m looking to take 20% of my profits, which allows me to play another day when markets go down again…. Because it will.

So onto the topic at hand. So as some of you know that I’m somewhat of a newbie to the crypto space, so what I attempt to do is do some research and share my notes with all of you. The purpose here is to just share what I learned and hopefully, in my process, I get to learn something new as well. So we started off on Ripple, then we switched to Ethereum, and then to Litecoin. Next up is EOS.

In conducting my research of EOS, I have found another ICO that is hard to place into one clear category. But I think the exercise of trying to figure EOS out will help me in my process of learning more about Cryptocurrencies. As always, I will try and break down my research in What, Who, Why, When and How and will deliver it in several parts.

What do we know about EOS? Here is what googling on the internet produced. Note, I’m sure most of you who have been watching CNBC, MSNC, Money, Coindesk, Cointelegraph, blockgeeks.com and all other media channels already know about EOS but to those that have been in the dark, like myself (and those who are not in the know)….

Question: What is EOS?

Summary:
• EOS’s creator is a group of individuals and entities. Block.One is the company that owns EOS. The CEO is Brendan Blumer and the CTO is Dan Larimer, who is also one of the co-founders of STEEM and Bitshares (ICO exchange); Brock Pierce, Chief Strategy Officer of Block.One (Brock is currently the Chairman of Bitcoin Foundation, Co-founder of Blockchain Capital, founder of IMI Exchange, ZAM, and IGE.)
• EOS was created in June 2017, as part of an initial white paper….so its fairly new and young.
• EOS is a blockchain platform for the development of decentralized applications (“dapps”). It makes dapp development easy by providing an operating-system-like set of services and functions that dapps can make use of. This is very similar to Ethereum’s platform of having everything on the same platform/system. Key similarity is the Smart Contract approach. • The basic premise: “bring together the best features and promises of the various smart contract technologies out there (e.g. security of Bitcoin, computing support of Ethereum) in one simple to use, massively scalable decentralized applications (“dapp”) platform for the everyday user to empower the impending blockchain economy.”
• The key distinction of EOS is for COMMERCIAL SCALE level dapps. (e.g. develop decentralized apps for the masses…and not just for the sophisticated)
• Thus, EOS will provide developers the tools they need so that they can focus on the specific business logic for their application, without worrying about the cryptography implementations or communication with the decentralized computer • They aim to provide and complete operating system for decentralized applications focused on the web by providing services like user authentication, cloud storage, and server hosting.
• Some of thought of EOS as the equivalent of Google Play or Apple Apps store, one your phone before decentralized Apps.
• You would launch EOS and go on their site and download the various tools and modules that you would need.
• Note there is a difference between EOS and EOS.IS (more next time on the difference). EOS is essentially explaining the platform that exist for developers of dapps. 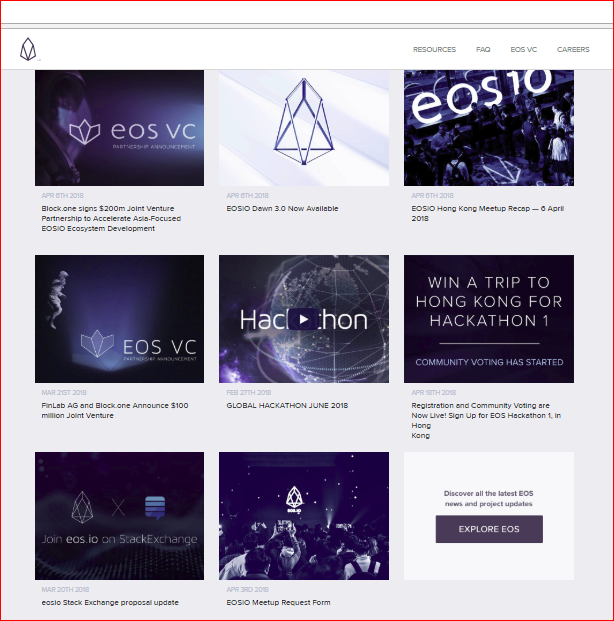 • Looking at EOS’s website you see that Block.One is very prominent as the owner of the Blockchain.
• Block.One is a Caymen based company that currently has multiple arms in the world of cryptocurrencies. Think Block.One as the equivalent of Enterprise Ethereum Alliance (EEA) that I posted awhile back during my research on Ethereum.
• Block.One has a Venture Capital Group that invests directly into companies that are looking to deploy capital into developing EOS related projects.

• EOS has 900M coins and has a max of 1B coins in circulation. They cannot be mined. It was distributed. I still have some questions about this but good to know there is NO mining.

• The EOS token sale works like no other token sale so far. The token sale takes place over a full year, starting June 26, 2017, with 350 periods of distribution. At the end of each period, the total number of EOS tokens designated for that period will be distributed to contributors based on the amount of ETH they contributed divided by the total contribution.
• EOS has surged recently and is currently now the 5th largest ICO by market cap. Hence the relevancy of why I chose to do this ICO next. 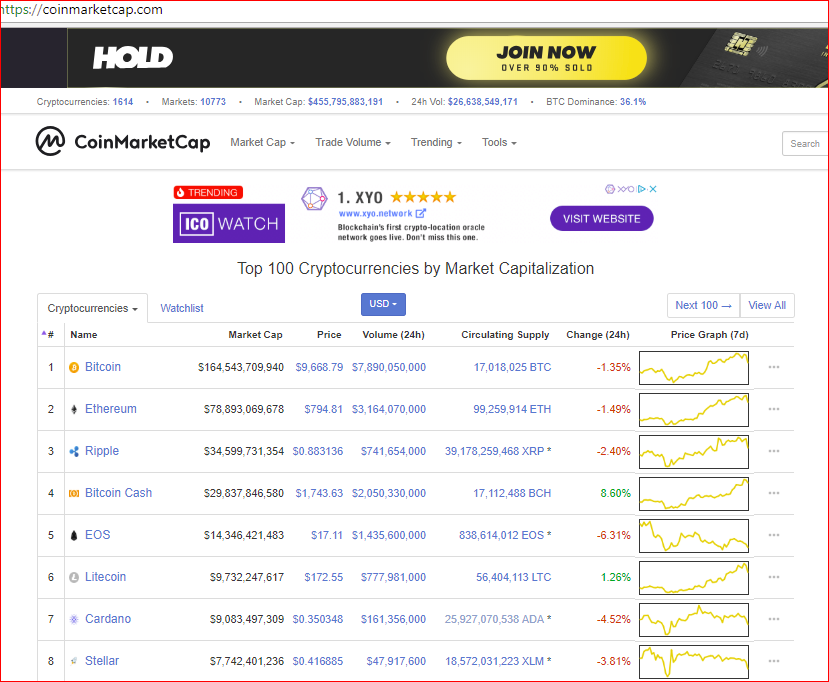 • One last tidbit: Block.One, announced the creation of a fund to exclusively invest in opportunities leveraging EOS.IO software. This is the first announcement for the company’s EOS VC partnership program to stimulate EOS.IO innovation and, importantly, it comes as part of a partnership TomorrowBC. Derek Rundell, a managing partner of Eric Schmidt’s venture firm, TomorrowVentures, is the Managing Partner of TomorrowBC. Schmidt is the billionaire and Executive Chairman of Alphabet, is a big fan of the potential of blockchain technology and that TomorrowBC is seeding a fund with Block.One creates a direct link between the Google billionaire and the company EOS technology. IF this is real then its driving change.

Key Takeaways:
• EOS is a platform that is similar to Ethereum, in that they have Smart contracts and various other dapps
• EOS is setup to combat Ethereum, in that Ethereum are for the nerds who have the background to create dapps from scratch and have the necessary abilities and team to create new apps.
• EOS is created for the “Ethereum for dummies who don’t want or have the time to learn and create Ethereum apps”
• EOS is making dapps easier to create and get up and running sooner or faster
• EOS has NO mining.
• The backers of EOS are Block.One, who consist of an impressive list of ICO founders and innovators.
• Block.One partners include: founder of STEEM, Bitshares, Eric Schmidt’s VC fund, Bitcoin Foundation, and Ethereum developers.
• EOS has the blend of bitcoin, Ethereum, and capital.
• EOS has been on a surge moving from 9th to 5th in 4 months. 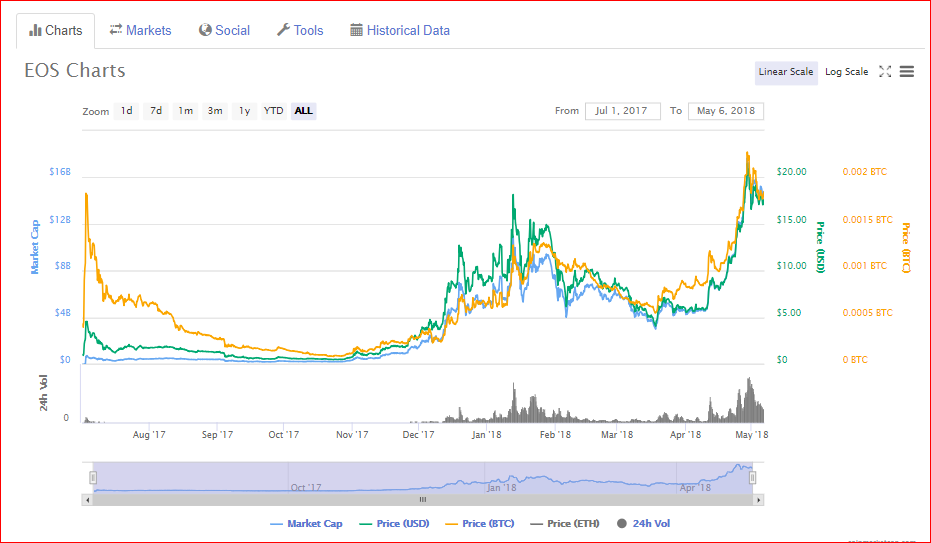 • EOS offering is compelling because it gets the dapps into the masses faster and quicker without the complications.
• Could EOS be a Ethereum Killer? Not sure but it seems to be based of the Ethereum concept of Smart contracts but its more user friendly.
• There is SO MUCH technical stuff but I’m beginning to see the merits of EOS….more to follow in the next few posts.

eos ethereum bitcoin cryptocurrency
3년 전 by epan3561
$92.25
29 votes
댓글 남기기 12
Authors get paid when people like you upvote their post.If you enjoyed what you read here, create your account today and start earning FREE STEEM!
STEEMKR.COM IS SPONSORED BY

I'm thinking of buying but the price is so close to all time highs while other coins are still cheap so either it's just unusually strong and simply the best coin on the market and will stay that way or it could easily lose half it's value to be in line with other coins.

Thanks @nrad. EOS is a hard one to bet on for sure. There is no guarantee on this...but it does seem to suggest that it has somewhat of a bright future.

Great info! :) thanks for sharing i'm always keen on looking for new things to invest in

Thanks, great article, I am a newb in the space also, very good writing and easy to understand.

Thanks for the info my friend. I was thinking about taking a small EOS position but was unable to buy it through bittrex, which is where I normally buy my altcoins through... odd! Good recap!

Thanks @brian.rrr, I'm trying to figure out how to buy it as well. I think the June 2 deadline is real. Could be a catalyst...but who knows.

Nice summary there man. I recently moved a good load of my alts into eos. I think it is going to be a great token built on the eth network. I think, well hope to see the price increase once we start to see some powerful / commercial dapps built upon it. I think with having Dan as the CTO dos is looking to grow quickly and use the lessons learned from steem to avoid the pitfalls that hit steem on the road so far. It will be interesting to see the eos nodes reward system. It could be a very lucrative swap for existing rigs dependent on requirements. If we look at the steemit witnesses, unless you are in the top 40 - 50 bodes you could be running at a loss.

You have a new follower for more of this. 😎

Thanks @moonunit. Sorry for the delayed response. But really appreciate the feedback. I'll hit you back with an upvote. Thanks again!