So Last week I took a first cut in trying to learn more about EOS. And what we concluded was that it’s a more user friendly version of Ethereum where the blockchain coders have already built modules and systems that all average people can use to build their own decentralized apps. You can think of EOS as a Apple Store where you go on and you can buy dapps and other items to build your own dapps yourself. Unlike Ethereum where you are at the most basic foundational level of blockchain and coding, EOS is at a more user friendly level. We also found out more of the founders of EOS and how that is a key differentiator. Lastly, we found out that EOS cannot be mined. There is a finite amount has been distributed 900M and another 100M left (1B) in total of EOS tokens.

This week we continue with our EOS research and look at attributes about EOS and how they are broken down between EOS token and EOS.IO.

As a reminder, most of my research is via google and reading of various crypto websites as well as resources. My goal in all of this is to get up to speed and share with all of you what I learned. In many cases, what I learned is probably already published about 1 year ago, so I could be late to the game. But for me, researching and sharing is the best way for me to learn.

Again, nothing proprietary here, lots of google and websites….

Summary from last week:
• The creators and owners of EOS is Block.One, which boast of some of the most influential players of ICOs space.
• Block.One’s CEO is Brendan Blumer, CTO is Dan Larimer, co-founders of STEEM and Bitshares, Brock Pierce, Chief Strategy Officer of Block.One (Brock is currently the Chairman of Bitcoin Foundation, Co-founder of Blockchain Capital, founder of IMI Exchange, ZAM, and IGE.)
• EOS was created in June 2017
• EOS is a blockchain platform for the development of decentralized applications (“dapps”).
• The key distinction of EOS is for COMMERCIAL SCALE level dapps. (e.g. develop decentralized apps for the masses…and not just for the sophisticated)
• Thus, EOS will provide developers the tools they need so that they can focus on the specific business logic for their application, without worrying about the cryptography implementations or communication with the decentralized computer
• EOS has 900M coins and has a max of 1B coins in circulation. They cannot be mined. It was distributed.
• EOS has surged recently (from the 9th largest) and is currently now the 5th largest ICO by market cap. Hence the relevancy of why I chose to do this ICO next.
• Block.One, announced the creation of a fund to exclusively invest in opportunities leveraging EOS.IO software. EOS VC partnership with TomorrowBC. Eric Schmidt’s venture firm, TomorrowVentures. Schmidt is the billionaire and Executive Chairman of Alphabet, is a big fan of the potential of blockchain technology and that TomorrowBC is seeding a fund with Block.One

Summary for this week:
• The EOS ecosystem comprises two key elements: the EOS.IO and the EOS tokens. 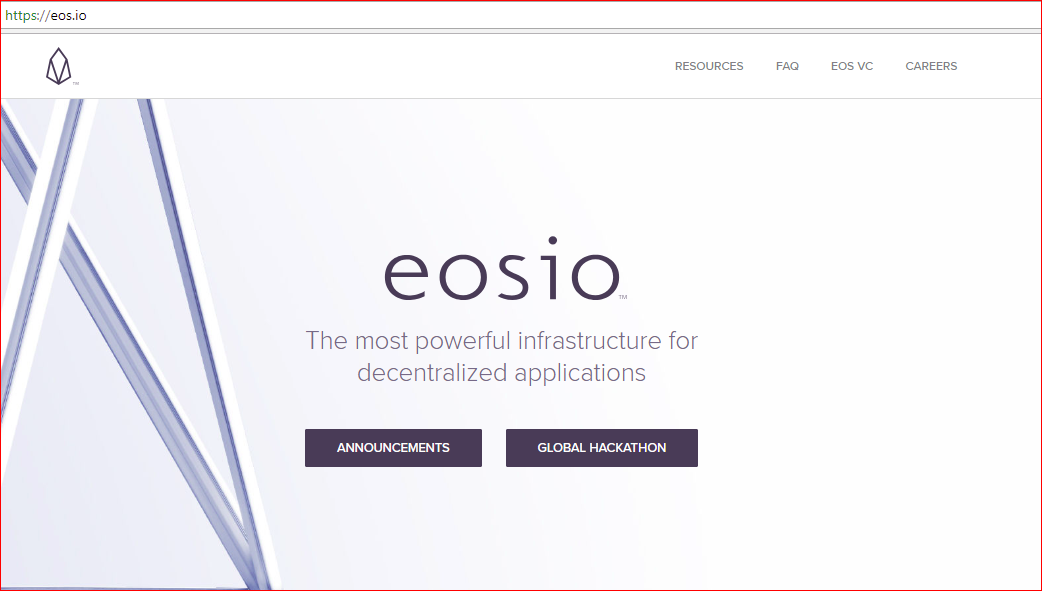 • To draw a parallel, EOS.IO is similar to the operating system of a computer (e.g it manages and controls the EOS blockchain network. EOS.IO uses blockchain architecture that is built to enable vertical and horizontal scaling of decentralized applications. The EOS token is of the EOS network.
• EOS.IO provides accounts, authentication, databases, asynchronous communication and the scheduling of applications across multiple CPU cores and/or clusters- The resulting technology is a blockchain architecture that has the potential to scale to millions of transactions per second, eliminates user fees and allows for quick and easy deployment of decentralized applications- Easy Upgrades and Bug Recovery- Low Latency
• “The software of EOS.IO uses the decentralized consensus algorithm – delegated proof of stake (DPOS). According to this algorithm, the token holders in the blockchain with the use of the EOS software choose the block creators through the continuous approval system and every network participant can take part in the creation of blocks proportionally to the VOTES received.
• I can’t confirm this but it would seem that EOS.IO would be considered a private blockchain, not public.
• EOS.IO is a open source smart contract. 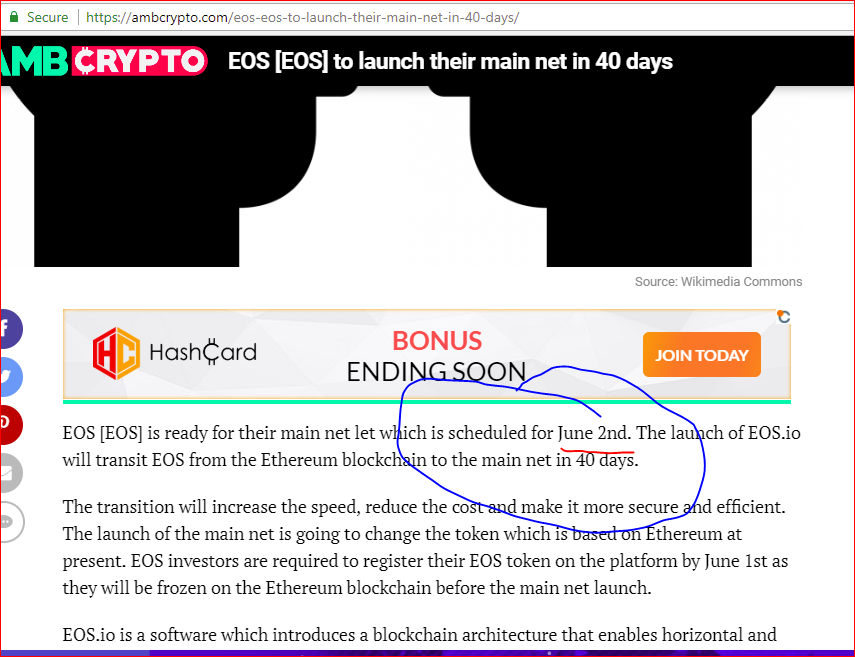 • The initial feedback seems to suggest that EOS could be a game changer, as investors and developers are jumping on the band wagon. The quotes from these people suggest that XRP, LTC, and BCH could see a new ICO that will jump over them. Not sure. Dan Larimer that co-founded STEEM, resigned from STEEM to develop EOS. His rationale seems reasonable. Namely: If you’re going to build some dapps today, what options do you have? …..he lists out potential options but all with limitations. Then he states: It seems that you are left only with Ethereum which has a very bad throughput and high transaction costs. • It would seem that EOS could either be a substitute for Ethereum or it could be complementary…But all of this is hard to say until we see EOS.IO up and running and getting widely adopted.

Key Takeaways:
• One of the deadlines that I’m looking at is June 2, this is the expected date that EOS.IO is up and running. I’m not sure what that means.
• But EOS’s run up has been impressive. I wonder how much of that run up has been priced in.
• EOS’s recent decline suggest that there are some funny market manipulation happening.
• My bet would be to figure out how much you’re willing to bet on EOS…and be prepared to make a lot or lose a lot. I think there will be a fair amount of profit taking….post Jun 2.
• I didn’t realize that EOS.IO hasn’t been official yet, although there seems to be a ton of dapps already made…in the form of Ethereum platform.
• I’m not sure if the EOS.IO will all of sudden allow more accessibility than what it is now…it might but not sure how material it will be….hence the hesitation on my part to put lots of capital behind EOS.
• I think there is something there…and maybe its worthy of a top 5 cryptocurrency Market Capitalization….but not sure if its top 3….e.g. Could it replace Bitcoin, Ethereum? It could replace Bitcash, Litecoin or even Ripple.
• There is enough capital that both Ethereum and EOS.IO can survive together…..similar to what we see in most industries…there are always 2-4 companies that provide similar / complementary services…and they offer enough to keep some market share (e.g. AT&T, T-Mobile, Verizon, Sprint…..or DirectTV, Dish, Spectum Cable….yet get the example.
• I’m in the camp that EOS.IO and Ethereum target different parts of the market and don’t really need to kill each other…they end user are uber nerds (Ethereum) vs. regular nerds (EOS)

eos ethereum bitcoin cryptocurrencies
3년 전 by epan3561
$100.65
24 votes
댓글 남기기 14
Authors get paid when people like you upvote their post.If you enjoyed what you read here, create your account today and start earning FREE STEEM!
STEEMKR.COM IS SPONSORED BY

if i buy eos now do i have to register it in some way with eos , as it was a few months ago? - i am holding off from buying until this situation is cleared and i can buy without registering my eos

You have to register your EOS address before launch otherwise your tokens will be worthless on June 2.

You will miss the airdrops if you don’t register. Try the Exodus wallet, very easy and your tokens will get the Genesis snapshot.

thanks so if I use an exodus wallet that will take care of registering my EOS ?

Hi, I found this a useful guide. It worked for me. I love my Exodus Wallet and my EOS are now registered.

very good -many thanks

This person Kyle has some wonderful videos about EOS. Watch them all to get an insight as to the unique opportunity that we have before June.

allow me to reblog your writing, as it is useful for other friends.

A good introductory summary of a pretty complicated subject.

Thank you, for the helpful summary, @epan35. It seems everywhere I turn, I hear of EOS. Will share fruits of your research with my wife (a financial analyst who brought this clueless poet to Steemit). Cheer, Yahia