The methods used to generate these are:

The GEs produced from the above methods are then averaged to give the above results.

Bet of the week

Analysis: Bournemouth are unbeaten in the last 5 at home, including a decent 2-1 victory against Arsenal. In fact, only two teams have beaten Bournemouth by more than a single goal when playing there (Liverpool 0-4 and Watford 0-2). Even the mighty Man City could only win 1-2 after a 97th minute winner!

Spurs in their last away game managed a 0-1 victory away to Palace thanks to a late Kane winner. Most recently though, they have been knocked out of the CL by Juventus in frustrating fashion, and so could be suffering from a "hangover"

The H2H favours Bournemouth slightly here, with the last meeting being a tight 1-0 victory for Spurs, and more importantly, the last time at Bournemouth's ground it finished 0-0.

With all of this taken into account, I think Bournemouth are, more often than not, going to make this difficult for Spurs. By betting on the +1 Asian handicap, we can protect our money against a 1-goal Spurs victory, while still keeping a Bournemouth win or draw on our side.

Thanks for reading, and good luck with your FPL and bets this week!

epl soccer fpl football betting
5년 전 by acelad52
$16.72
10 votes
댓글 남기기 11
Authors get paid when people like you upvote their post.If you enjoyed what you read here, create your account today and start earning FREE STEEM!
STEEMKR.COM IS SPONSORED BY

You got a 2.29% upvote from @postpromoter courtesy of @acelad!

I totally agree with you that arsenal Vs Watford match will have more goals , they are both attacking team and concedes a lot of goals

I think Manchester City should be the most scoring team in EPL this weekend.

Sometimes my own model surprises me! The fact is, if this were based on shot stats alone, Liverpool would edge it. However, we can't ignore United's incredible defensive record at home, conceding only 6 goals in 14 matches!

I think the first goal is crucial:

Scenario A) If United score first they will sit very deep and make it difficult even for Liverpool to create a chance. The most likely score here is no more goals, and it finishes 1-0.

Scenario B) If Liverpool score first United will have to open up, and with Liverpool's pace up front, and ability to get in behind, this could finish 0-2, 0-3, 1-3... If United withstand the pressure and get a goal back of their own, they can revert to their normal shape and it most likely finishes 1-1.

I'm actually a Liverpool fan myself, so I'm hoping we get the first goal. It'll make for a more exciting match for the neutrals too!

Your model was correct. Nice call.

Regarding the other bets you've placed I like Newcastle +0

Thanks! Liverpool may have been a bit unlucky not to win a penalty, but it was always going to be difficult to come back from 2-0 in the second half at Old Trafford.

Hey @acelad thanks for this useful article.

What do you think about my champions league predictions for tonight's games?

Sorry @killabeezh I didn't see this before the matches. In hindsight I would say the Man U vs Sevilla match overall was a lot more open than I expected, so you were a bit unlucky there.

The Roma vs Shakhtar game was different, very tight. Once Roma got the lead they were happy to keep it, so more goals were difficult (I had an inplay bet on Roma to get lots of second half corners when it was 0-0, but when they scored early in the 2nd half that ended my chances!)

Well that's what you call a second half collapse from Bournemouth... They were winning 1-0 after 7', and when they were 2-1 down in the second half pushed players forward, exposing themselves at the back, conceding twice in the last 4mins. 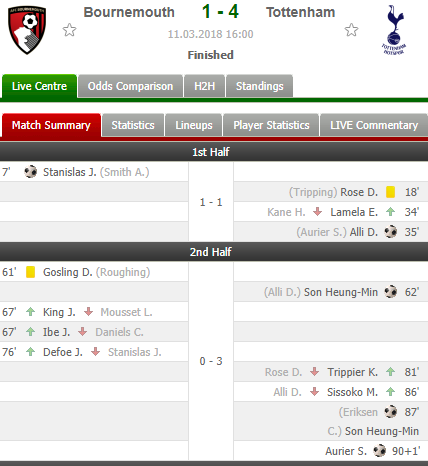