Wayuu women: hands weaving life and dreams of their people

Between hammocks, bags, bracelets and blankets, threads intertwine themselves and give life to the Wayuu culture. The vast spectrum of colors contrasts with the aridity of the desert landscape and the dark skin of their women, who are in charge of preserving the community in respect to the Wayuu tradition expressed through ancestral fabrics.

They are those who, since ancestral times, have taken the reins of this culture which has expanded on the peninsula of La Guajira. It is thanks to them, in large part, that their traditions transcend this territory, honoring the meaning of their name - wayuu, which means 'mighty man' in the Arhuaco language.

Yotocorous constructions - that is, bark of cactus, mud and cactus roofs represent a people who survive and safeguard themselves in an arid and difficult environment such as the desert. There are small houses, a kitchen with wood burning stoves that evoke ancient flavors and various pergolas where visitors are received.
Textile is one of the main skills and charms of this ethnic group: hammocks, bags, bags, blankets and bracelets with different designs and colors captivate the looks of the Arijunas (as they call those who do not belong to their community) everywhere they are exhibited. 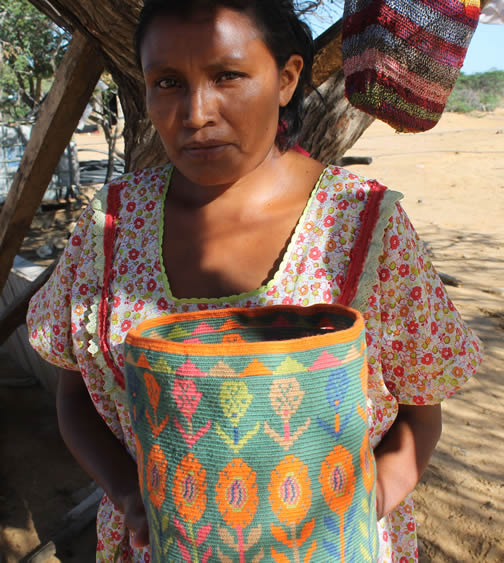 For them, especially for women, this activity symbolizes something beyond a source of income or economic sustenance. It is related to the essence and vision of the Wayuu woman and her descent.

"The textile has much to do with weaving life, weaving dreams, preparing for life. That is why learning how to weave begins very early in life."- Graciela Cotes, leader of a Wayuu community

From childhood, they are introduced to this art form, which slowly gets perfected during the crucial time of puberty. From their first menstruation, young girls are isolated from the community for a period of several months, as part of a ritual of preparation for their life as women. In this period of time, they are trained from an elderly woman such as the grandmother or mother, who pass on to the younger generation the techniques and the tradition of designing and weaving these unique textiles. Once the girls master this art, they are considered ready to enter the adulthood and they are welcomed again in the community as women.

Wayuu women are the backbone of the culture and tradition of this ethnic group, because they transmit their knowledge and skills from generation on to generation. Thanks to their weaving, they can sell their art creations and sustain their families, and consequently their community.
Wayuu bags have become popular in many countries outside of Colombia; however, their value is sometimes not recognized enough, as they are forced to sell their products at a lower price. For example, to weave a bag it takes up to a month, depending on the size. Our social-responsible activity aims to give value to their art craft in order to preserve the quality of their work and to support them in a more just way.

We, as Mercados Away, have a fair trade partner organization in Riohacha, Colombia, who works closely with Wayuu communities and pay the artisans a right price, agreed among both parties in a transparent way, so that this tradition can continue further and the Wayuu communities can live with their art.

Here are some examples of the colorful Wayuu bags we offer in our online fair trade shop: Every bag contains such an incredible value that goes beyond the simple technique and hard work to make one, but taps into the ancient knowledge of the Wayuu women.

Did you know about this ethnic group before?
Have you got a bag already?

fashion colombia fairtrade artcraft story
3년 전 by mercadosaway47
$11.51
74 votes
댓글 남기기 18
Authors get paid when people like you upvote their post.If you enjoyed what you read here, create your account today and start earning FREE STEEM!
STEEMKR.COM IS SPONSORED BY

Beautiful handcraft, I would love one!

Thanks for your feedback, they are really unique! If you would like to see the ones we are selling, you can have a look at our website http://www.mercadosaway.com
We also accept Steem dollars eventually ;-)

One of my ancestors on my mother's side came from this ethnic group. I think it was my great-great-grandmother or something. She married a rich man who took her to Maracaibo, Venezuela and then to Spain, where my mother was born. Then they moved back to Venezuela and now here i am.

Wow, thanks @allbenis for sharing your family story. It is indeed very interesting to find out about the origins of your ancestors! The Wayuu people live between Colombia and Venezuela, as they did not have such borders before the birth of man-made nations. They are still entitled to freely move from a nation to the other without too many controls. We heartly recommend to visit a community and get to know their history and customs.

On the contrary, thanks to you for being interested on what i had to say. I must say that i knew that, about the non-existent boundaries between countries for the Wayuu culture. That's the way it should be to everyone. Although many, if not all, of the customs were lost in my family due to the regular transcontinental travels and generations past, i would love to visit a comunity and see their way of living.

such talent I have never seen before; it is beautiful!

such a beautiful bags and such beautiful meaning besides them! Thanks to share them with us ^_^

Thank you @silviabeneforti, we fell in love with this ancestral art! We'll keep documenting some other stories in this blog, thanks for following us!

This post has been upvoted from the account @Uniiq Its a new upvote project made on steemit. Double prize your bid!
everything what you should know, you can find There

This post has received a 13.15 % upvote from @boomerang thanks to: @steemitri

This wonderful post has received a bellyrub 1.04 % upvote from @bellyrub thanks to this cool cat: @mercadosaway. My pops @zeartul is one of your top steemit witness, if you like my bellyrubs please go vote for him, if you love what he is doing vote for this comment as well. Want a boost? Click here to read more about @minnowbooster!

The @OriginalWorks bot has determined this post by @mercadosaway to be original material and upvoted it!

Congratulations @mercadosaway! You have completed some achievement on Steemit and have been rewarded with new badge(s) :

This post has received a 1.39 % upvote from @booster thanks to: @steemitri.