My Son Makes His Own Jurassic Park Encyclopedia

My wife and I encouraged our eldest's love of animals as much as possible. It usually meant spending any spare cash on books, and the quick favorite became animal reference books. He would pour over the pages for hours, memorizing the smallest details.

One time he won a game of 20 questions by choosing a 'rock pigeon' as his answer. Grandpa, for the life of him, couldn't figure out what other bird besides 'robin' began with an R. Son couldn't believe Grandpa didn't know what a rock pigeon was, and immediately grabbed his reference book, opened to the correct page, and showed him. Eventually he'd watch Jurassic Park and get hooked on dinosaurs. So I was delighted to come home one day and find a page out of his own homemade Jurassic Park Dinosaur Encyclopedia.

Ladies and gentlemen, the Mosatasaurus - which, I'm guessing, is a combination of a t-rex and a mosasaur? I should ask him. 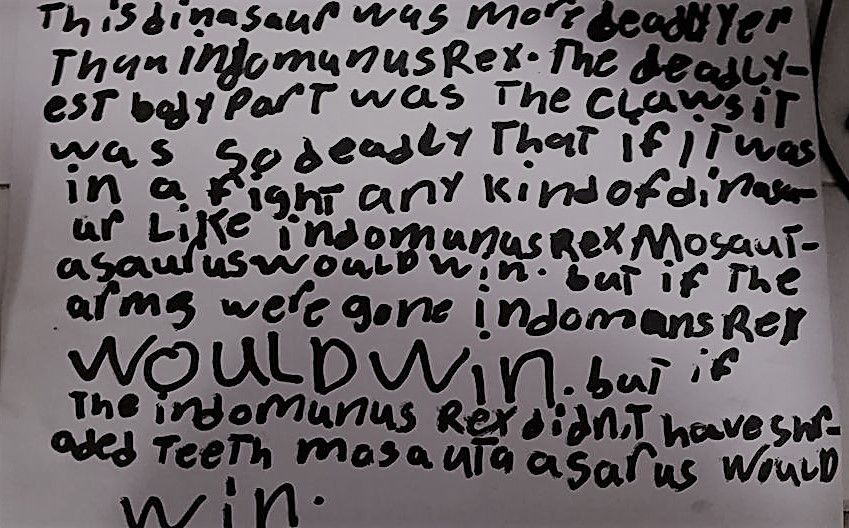 (I added some punctuation.) I love this kid.

fatherhood powerfulkids parenthood steemparents dinosaurs
4년 전 by natewazoo32
$0.00
1 vote
댓글 남기기 3
Authors get paid when people like you upvote their post.If you enjoyed what you read here, create your account today and start earning FREE STEEM!
STEEMKR.COM IS SPONSORED BY

These books are one of the greatest gifts you'll give your kids. My grandparents and my parents fostered a love of books in me at a really young age by making sure we spent a lot of time in libraries, bookstores (remember those?), and giving books as gifts during Christmas and birthdays.

I write this response from a library as I prep to work on another piece of writing about a curiosity first fostered long ago by my loved ones.

I'm blessed to live in an area with a first-rate library. Only ones I've seen better have been in major cities. B. and I go there all the time.