It was Wednesday morning, around 10:13am, the tone of the gentle breeze got the flowers dancing colourfully in the entire premises of Regal Academy. It was time for Christian Religious Knowledge and Mr. Ebong, the subject teacher captioned the lesson as "Greed and it's consequences". He was an efficient teacher, always neatly dressed, dynamic, smart, observant but strict, and above all; filled with the with the word of God.
The students all listened quietly as he sited examples of greedy people in the Bible to include Ahab and Gehazi.
Suddenly, Mr Ebong stopped talking. May be his sharp vigilant eyes had settled on something extraneous. He quietly walked up to Andy Umanah's desk and collected from him a piece of paper.
Andy Umanah, nicknamed " terror of the night " was busy writing a love letter while the lesson was going on. Mr Ebong caught him red handed.
Surprisingly, Mr Ebong was not angry as we thought he would be. Perhaps, he was looking at his offense from a humorous side. Nevertheless, he stopped to read out to the class Andy's love letter.
My sweet Paradise, he began ' when I think of your angelic eyes, and your sweet-scented smooth body, I can no longer sleep!'. 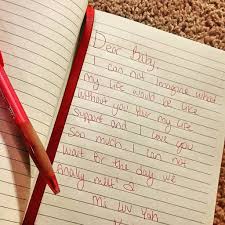 The whole class bursted into laughter 'How can you sleep when you think of such thing? Asked Mr Mr. Ebong
There was another flood of laughter. Andy Umanah bent down his big head in utter shame. As his name implied, he didn't look like a terror anymore. 'Andy!' Mr. Ebong called. 'Sir!' Andy Umanah answered, ' Why do you write such rubbish while the lesson is going on ?
Mr. Ebong asked. He wasn't able to answer the question but was gazing on the floor, with his right toe busy drawing nothing on the floor.
Mr Ebong continued " you will buy a new exercise book on Saturday, while other students are in the dormitory, you will remain indoors and in that exercise book, you will write 'I will not write a love letter anymore' for 1000 times, and show the it to me on Saturday evening".
Andy nodded in response. He knew he had received eternal disgrace,for from that day, his nickname changed to "Mr. Lover boy".

Thanks for reading.
BLACK REGAL STORIES are originally written by me. Please do well to follow the different exciting series of Regal Academy.
Here's the link to the first story

Don't forget to upvote and comment. I love you!

fbm steembees love writing story
3년 전 by elladean40
$0.00
댓글 남기기 0
Authors get paid when people like you upvote their post.If you enjoyed what you read here, create your account today and start earning FREE STEEM!
STEEMKR.COM IS SPONSORED BY