Fighting Lions: Masterchef Jorge Rausch, leading the crusade to get the world cooking with Lion Fish.

I originally published this article on Fine Dining Lovers. 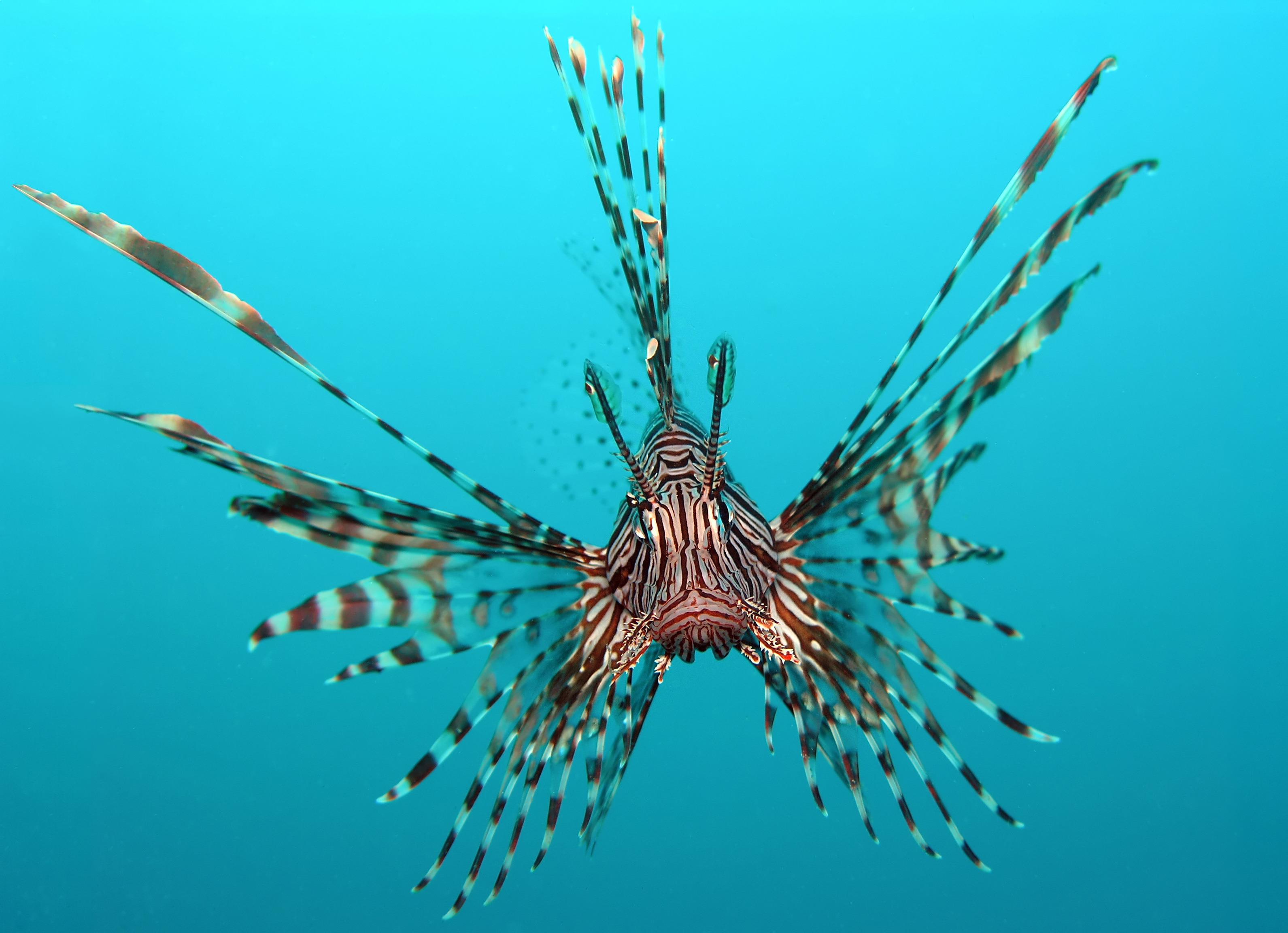 Meet Pterois; the lionfish, also known as the devil firefish, scorpion fish, dragonfish and other fear-inspiring names. Beautiful and bizarre, elegant and deadly. Well, perhaps not directly to humans, but there is a reason they have these monikers. They are top of the food chain. A lion in the underwater jungle. And they are devouring everything in their path.

Over the past 10 years Pterois has spread its seed. A lot. Its population has swelled across the Caribbean, Gulf of Mexico and the US Eastern Seaboard. One female can lay up to two million eggs per year and with no natural predators and a cavernous appetite they are decimating other native marine species and coral reefs.

Native to the Indo-Pacific region, the story goes they were introduced into the North Atlantic Ocean by pet owners no longer wanting or able to keep up with their ferocious appetites (each fish can consume up to 30 times its own stomach volume every day). If you ask others it was when Hurricane Andrew broke an Aquarium in southern Florida in 1992, releasing six lionfish into Biscayne Bay. Whatever the reason, they are here, and they are dominating. Enter Jorge Rausch. A man on a mission to get the world cooking with lionfish. “They are a plague on our seas” he declares, like some slightly starboard sea captain, but this is where the similarity ends. Rausch is not some Moby Dick whale-chasing fanatic. He is a chef at the top of his game. His restaurant Criterion, which he shares with his brother Mark, currently sits at number 29 on the 2017 Latin America's 50 Best Restaurants list, and was the number one restaurant in Colombia three years running. A judge on Master Chef Colombia. And a man who is passionate about preserving the diversity of species in our oceans, and along his native Caribbean coast. “I am not on a crusade. It is just that this really is an ecological problem that we have in the Caribbean, which we have found a gastronomical solution for.”

“The ministry of environment had a prohibition on fishing and consuming [lionfish], nobody knew why, but it was there. Maybe some bureaucrat in Bogotá decided it was dangerous and they forbid it, but there was no point, why should you not fish a plague?!” He now works closely with the environment minister to help raise public awareness of what is quickly becoming an international crisis, with recent reports indicating that they have reached across the Atlantic to the Mediterranean Sea.

In a recent interview with CNBC Pam Schofield, a fish biologist for the U.S. Geological Survey, said: “Lionfish have a voracious appetite, eating almost everything in their path — from economically important fish such as juvenile grouper and snapper to crabs, shrimps and algae-eating creatures.” "It seems lionfish had persisted for years at very low densities," Schofield said in a statement, "and then finally built up enough of a population to become invasive and spread onto other areas.

Additionally, regarding impacts to native fish and coral reefs, the NOAA (National Oceanic and Atmospheric Administration) stated: “A single lionfish residing on a coral reef can reduce recruitment of native reef fishes by 79% … negatively affect the well-being of valuable commercial and recreational fisheries.”

“As lionfish populations grow, they put additional stress on coral reefs already struggling from the effects of climate change, pollution, disease, overfishing, sedimentation, and other stressors ... For example, lionfish eat herbivores and herbivores eat algae from coral reefs. Without herbivores, algae growth goes unchecked, which can be detrimental to the health of coral reefs.” The news doesn’t bode well. However, there is one saving grace. They are mighty tasty.

Rausch’s cookbook Pez León, produced in conjunction with Colombian supermarket Olimpica aims to raise awareness by promoting the culinary versatility of the fish. “This is the first time a supermarket has committed to sell lionfish,” he says enthusiastically.

However, the problem is not demand but supply. “We still don’t have enough [stocks] of lionfish. We started to work with SENA (the national education and training service), they’re investing a good amount of money not just to teach but to give subsidies to fishermen to work with the lion fish … We are not only trying to help the environment, to get the lionfish out, we are trying to work with communities of fishermen, and help them be entrepreneurs. But fishing for lionfish is not as easy as it sounds. They have long venomous spines and hide among coral reefs, rendering conventional fishing techniques less effective. Rausch says the plan is to use traps similar to those used to catch lobster, but I have heard of something more effective.

Recently scientists from RISE (Robots in Service of the Environment) and iRobot announced they are constructing a new submergible robot to kill and capture Pterois. Nicknamed the Lionfish Terminator, the ROV (remotely operated underwater vehicle) will find and zap the animal with a high voltage directional current and collect it for use as food.

Lionfish are among a mounting number of species currently making their way on to the dinner lists of invasivores. In Louisiana they are serving up Cajun River Rat, whilst at Prey restaurant in Miami, chef Bun Lai is throwing out everything from Roast Feral Pig to Wild Texas Antelope Sushi. Some critics however warn of the possible negative effects of such strategies, suggesting that if a particular predator became popular with diners there is the potential for people to want to farm them for profit, further expanding the problem.

Earlier this month Rausch spoke at Yale University about the plans he and the Colombian government are putting in place. “We want to work with collaborative economics, to get people involved, to get private companies to work with the government, and work with the press, the fishermen, everybody working together to solve the situation.”

Rausch wants to kick-start a new economy. It’s still early days but the movement is gaining momentum. There’s talk of an entrepreneurial diver who has started selling lionfish to wholefood shops along the Florida coast, and there are plenty of websites dedicated to the culinary demise of this barbed invader, with killer titles like eattheinvaders.com and lionfish-slayer.com, and for the last 2 years Turks and Caicos have held an annual lionfish derby. “I am not the first, there are many chefs across the Caribbean cooking with lionfish now. Lionfish is very tasty. It is a rock fish, they are carnivores. Carnivore fish are the tastier ones. It’s white and delicate, like dover soul ... If you are eating mojarra or snapper you can change it for lionfish and it’s gonna be tasty.”

“This is why the book has not just Colombian recipes, but more international recipes as well – we want the whole world to cook with this delicious fish,” he enthuses. And why not? For once we have an overabundance of a delicious food source. So do the world, and your taste buds a favour, and go cook some lion!

food nature writing travel science
2년 전 by dylan00742
$0.13
5 votes
댓글 남기기 5
Authors get paid when people like you upvote their post.If you enjoyed what you read here, create your account today and start earning FREE STEEM!
STEEMKR.COM IS SPONSORED BY

This post is so interesting. I was watching a fishing programme where they caught lionfish and cooked with it. It was the first time I had ever seen that done with a lionfish. I grew up to see them as an aquarium fish and not one which is seen to be edible. Thank you for sharing! Hopefully this will become a new ingredient on the table.

Thanks @redmaidenart they really are super tasty (perfect for ceviche). I also really liked your post " Things That Make My Life Complete" . I see you are new to Steemit too, nice to meet you. I have followed you too. Look forward to seeing more of your posts soon! D

Yup that was my original article.

To think this decorative fish could be eaten! Good solution to plagues. Next dish: rats please (to help prevent Lhasa fever, currently plaguing Africa, and carried by rats). Ok; you don't fancy rat (why ever not? They eat guinea-pig, don't they! - in Peru). How about ratFISH? credit
My fishmonger's had one on display last Friday! (NOT my photo above. See credit - but they look more weird on dry land than in the water, hence this photo is the best.) But you CANNOT EAT them! (The specimen was not for sale.) I forget if they were poiisonous in any part, but I think it was that they were basically only skin and tiny-winy bones.
It is NOT a flying fish (way too big for such a trick).