I'm quite exhausted, most likely from the cleaning and the drinks. We hosted a food gathering, and it was just a non-stop eating bonanza. And so I'm told that's how it goes. First to do a deep cleaning of the whole house to welcome the new year (a recurring theme, I know). Then, to mess it up with a giant eating party, and then clean again. Ha.

Messing up the Clean

As part of the purifying, breakfast is to be vegan. We fried some rice cakes that we bought. For this we tried coating in flour and frying it. After asking other later, it's usually a flour and egg coating. The flour that we used probably didn't have any real effect.

It's satisfying to watch those rice cakes pop and hop. But the oil splattered like crazy as you could possibly imagine. Great way to start messing up the clean right? This is what we ended up with. It looks like meat right? Yeah, that surely disappointed my brain. Still, they were delicious. Crispy outside and sticky inside, and slightly sweet. I ate too many of them that day and was not feeling so good for a few hours after.

We prepared a lot for the food gathering, as another theme of Chinese New Year is that of abundance, and having a table filled with all sorts of food. 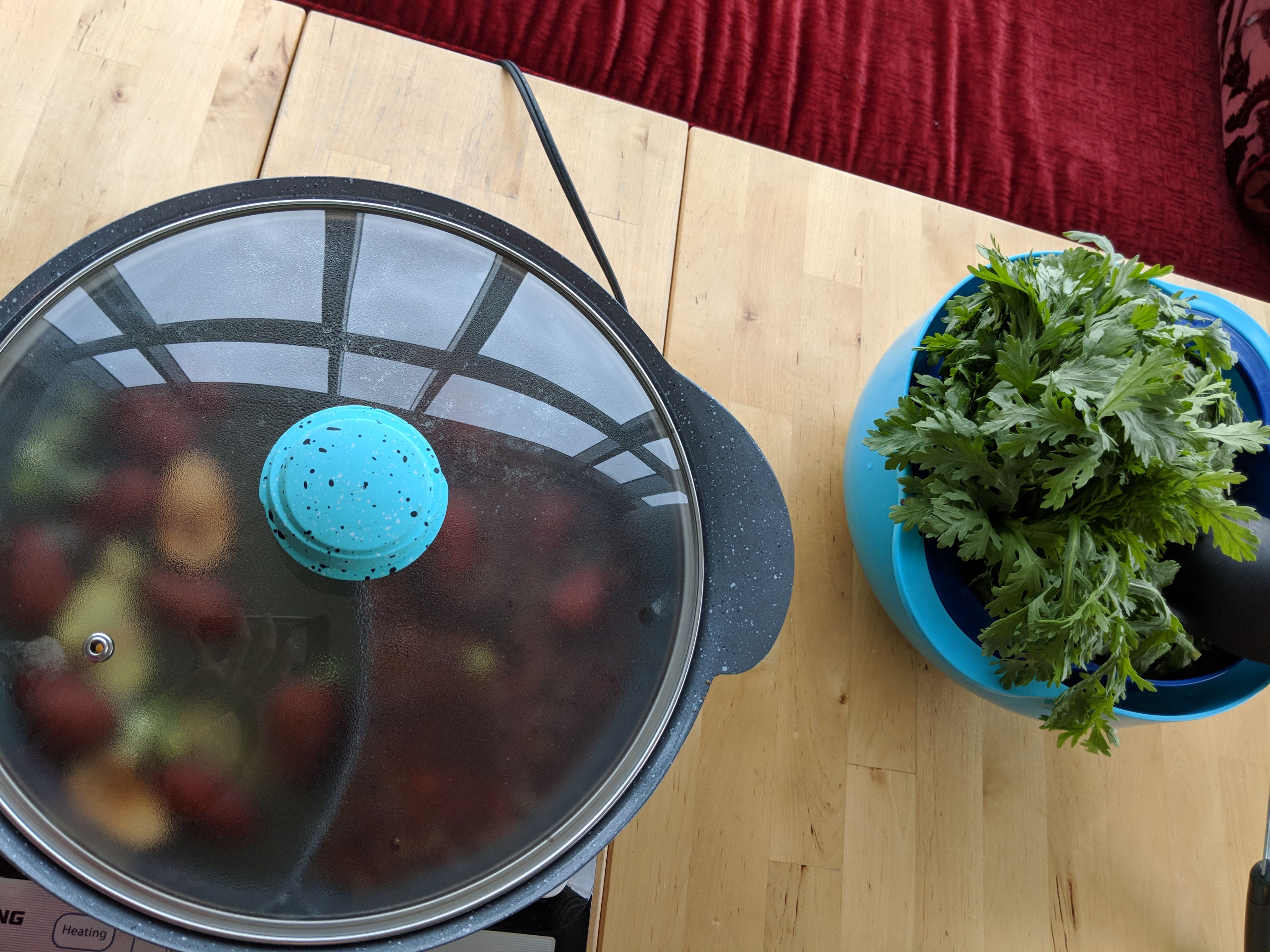 Hot pot, as usual. Easy to manage any number of folks. Steamed a bunch of dim sum. Stupidly, I also managed to destroy an older pot in the process for not putting enough water and steaming for too long. 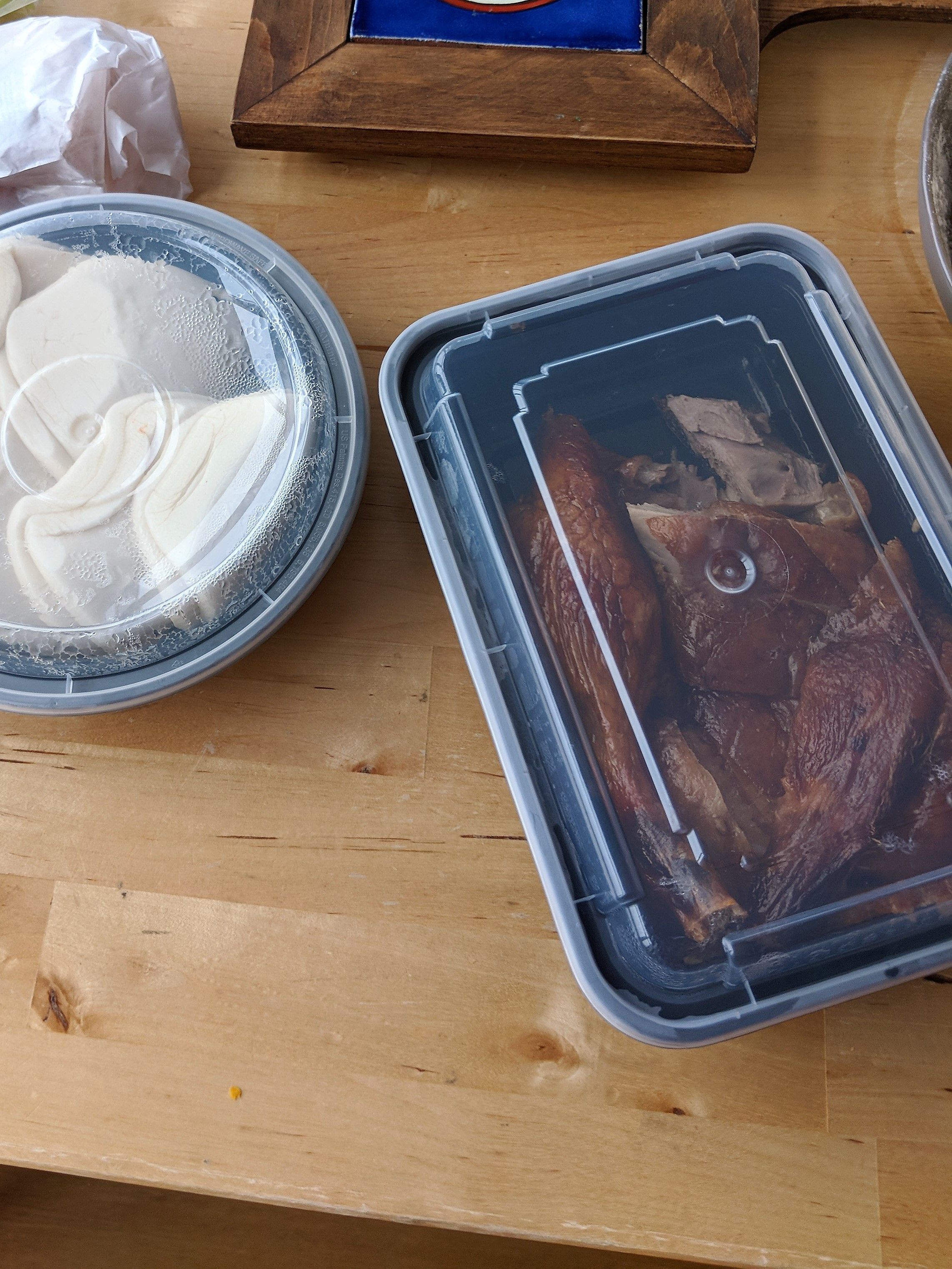 Wrapped Smoked Duck Bao that someone else brought. Handmade dumplings turned into potstickers. One of the traditions in Chinese New Year is to make your own dumplings, and someone brought ingredients for us. These ones are chicken mushroom celery dumplings. 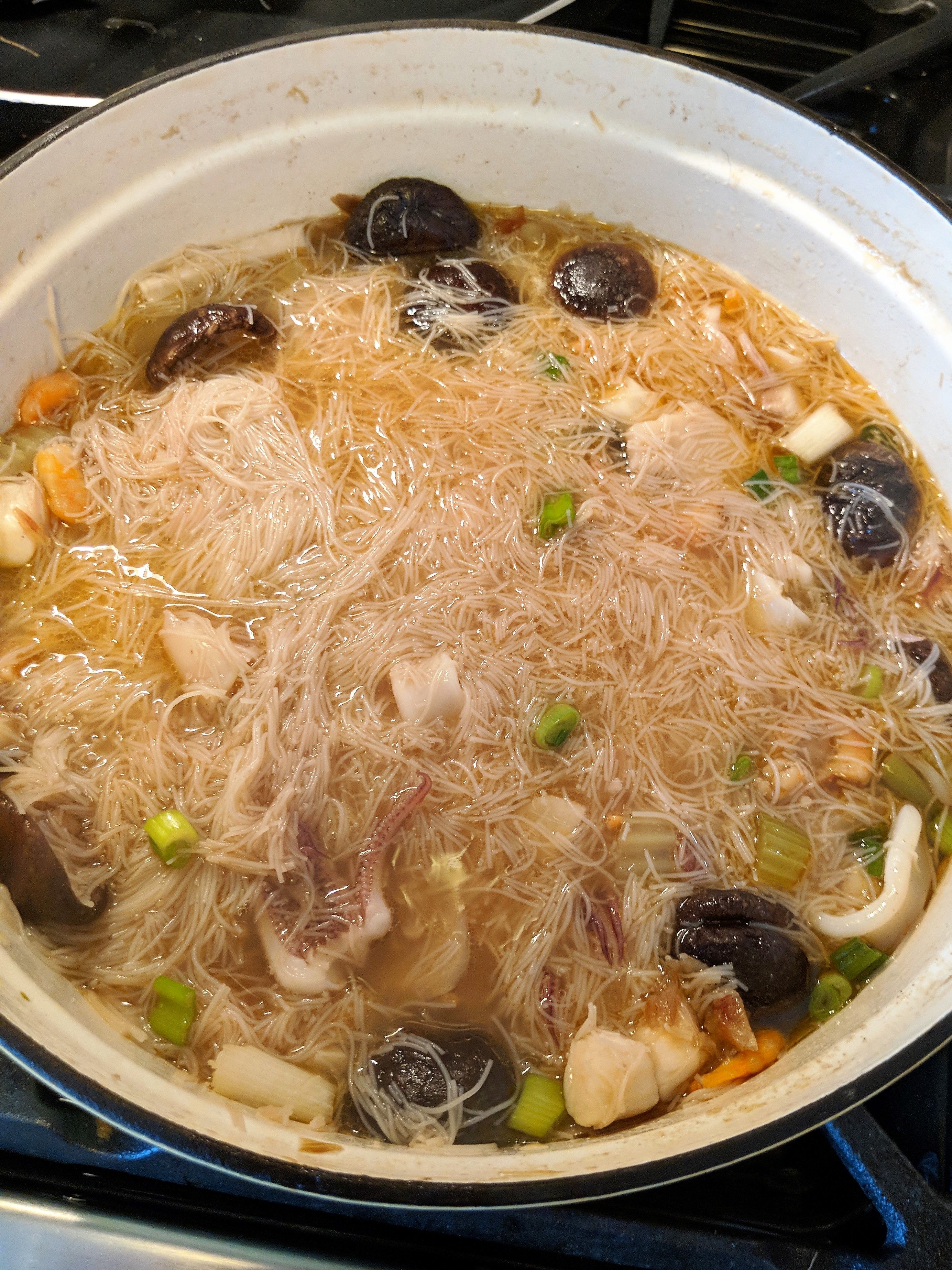 This is what my wife cooked together after finding a recipe online. A seafood rice noodle soup. This was a hit, it got completely cleared out. More rice cakes. We burnt them this time, trying to use less oil than this morning. Still, it tastes good, from what I heard. I could not eat any of these because I had so many that morning. 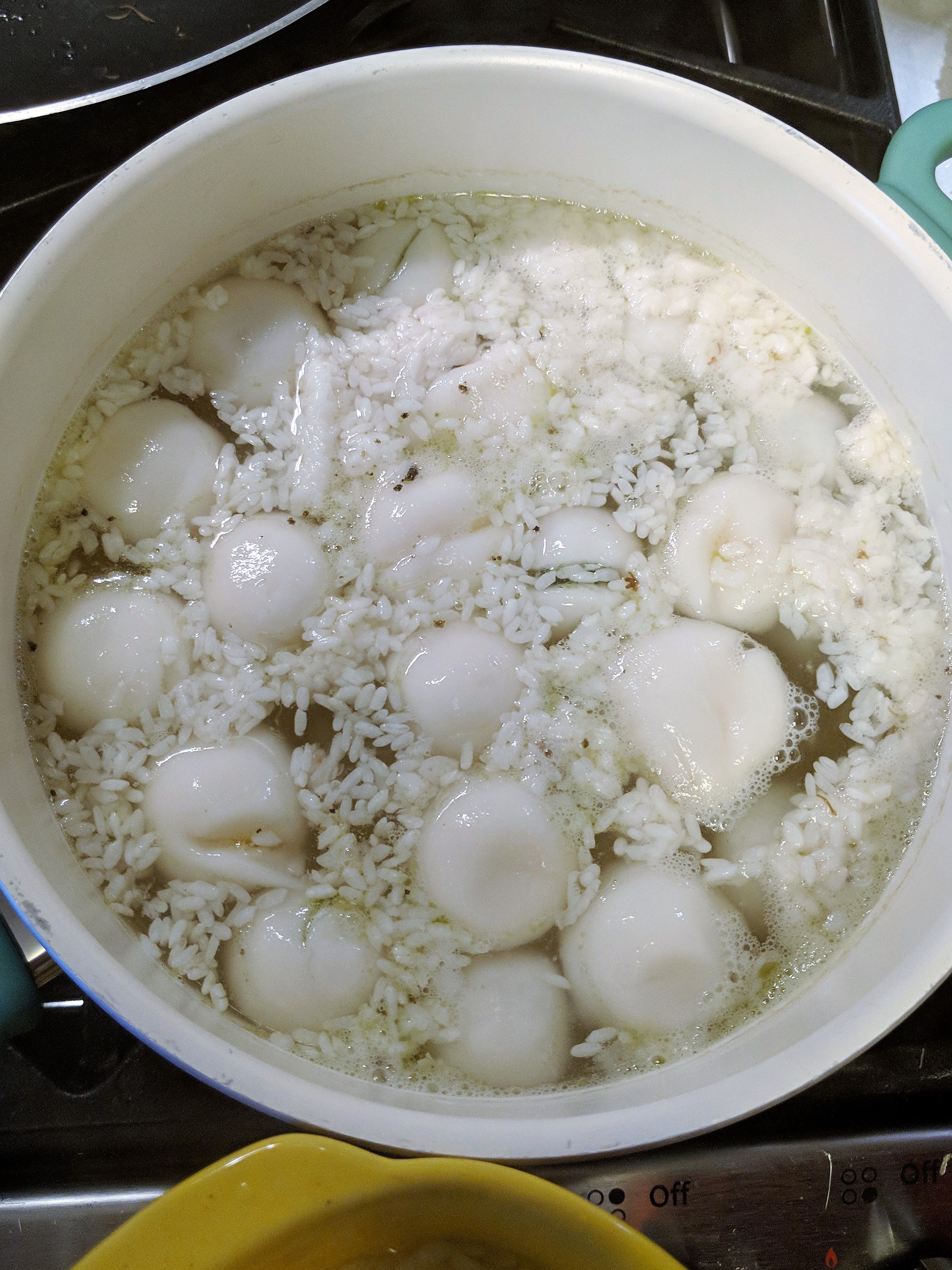 The Seafood Rice Noodle Soup gets its own special section. It is a fairly simple procedure. 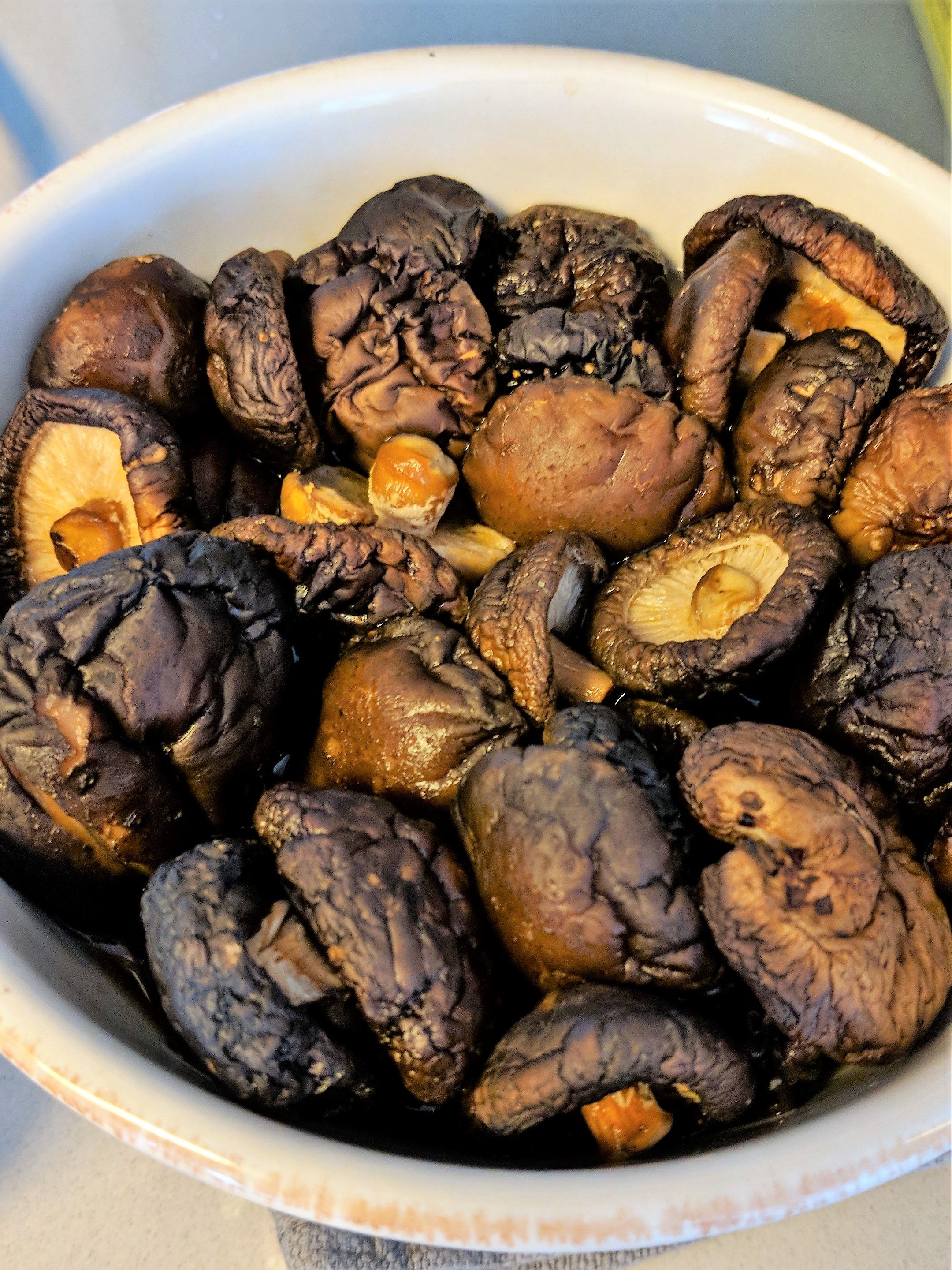 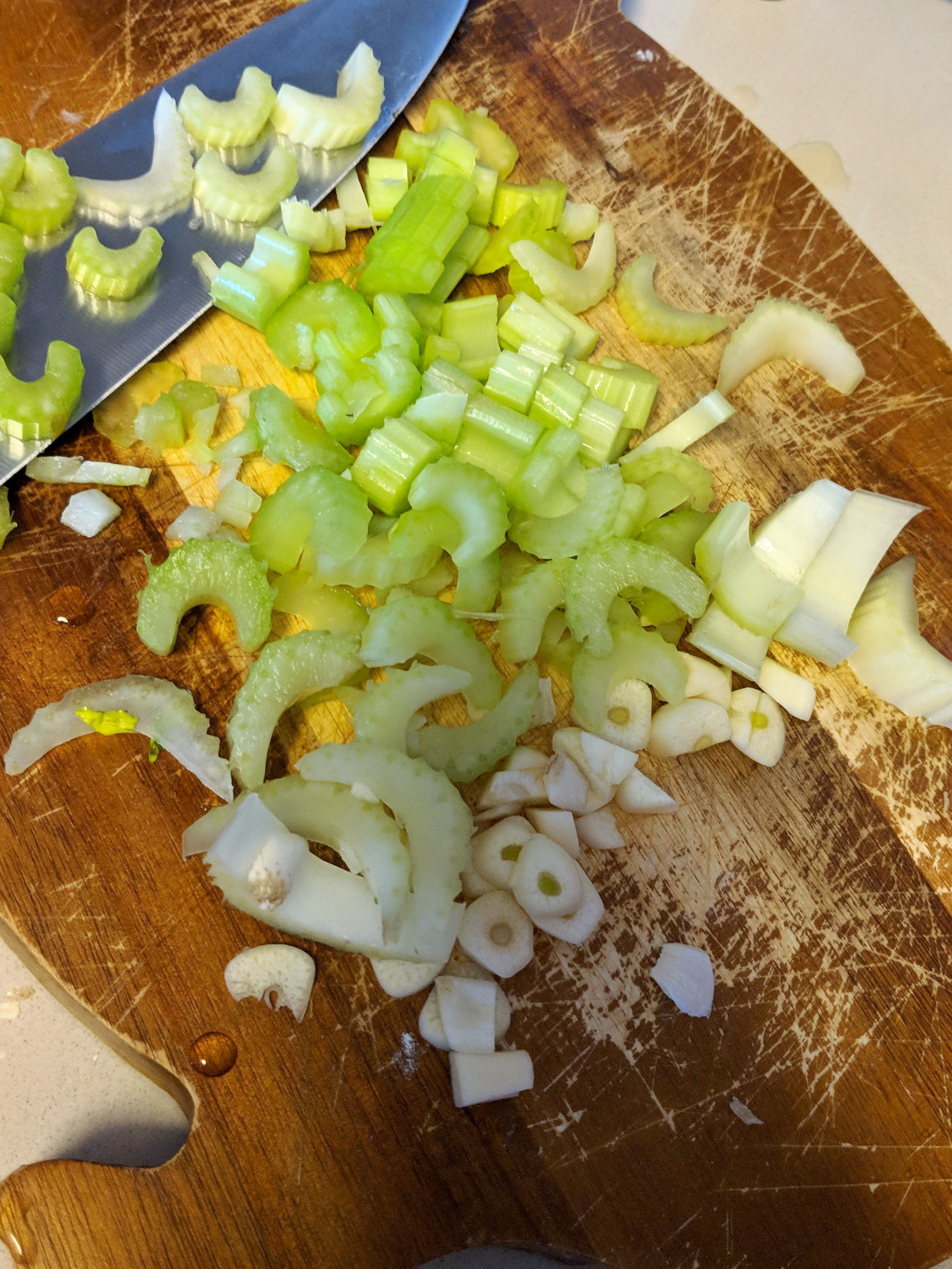 Cut up celery and garlic 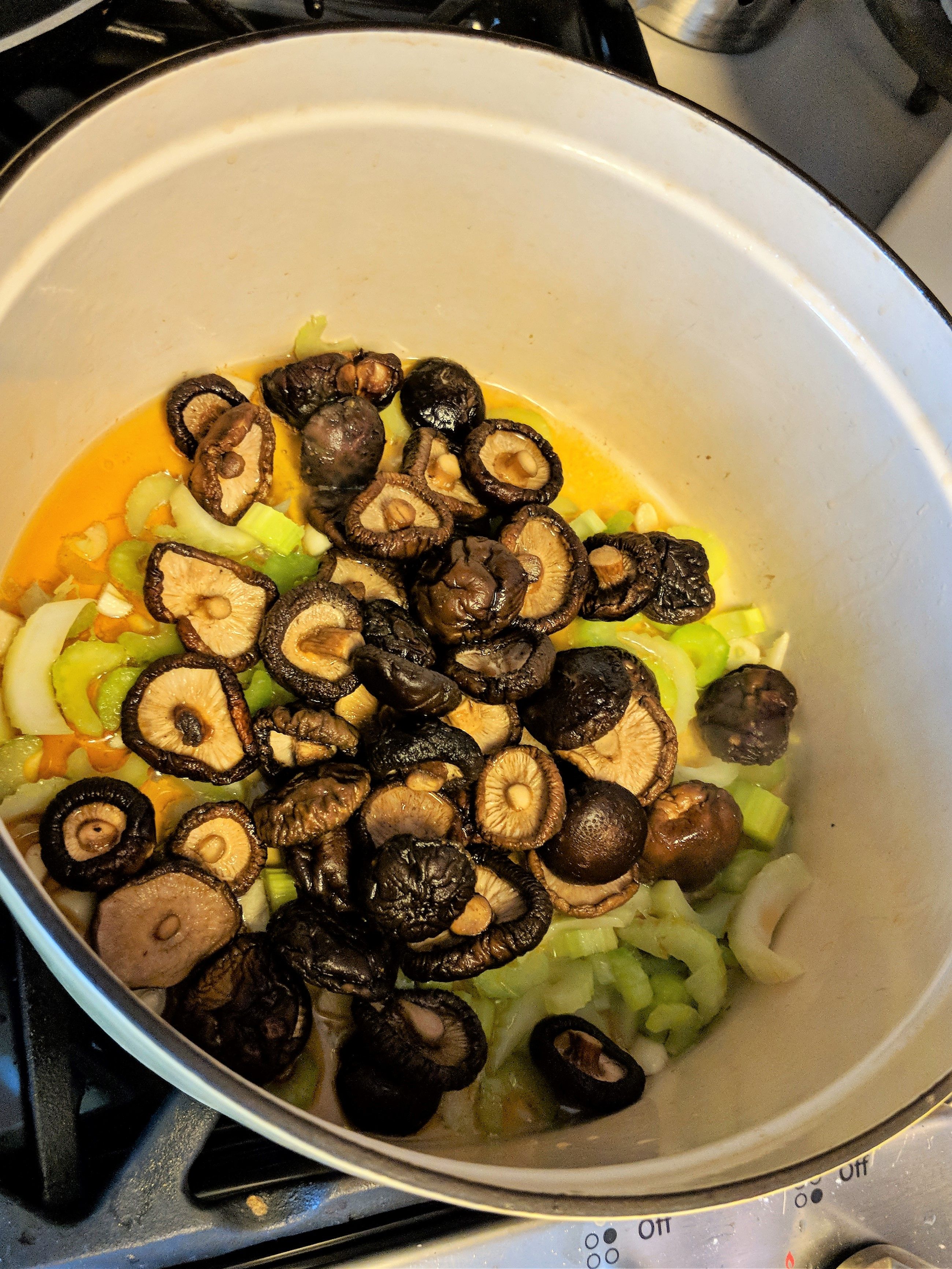 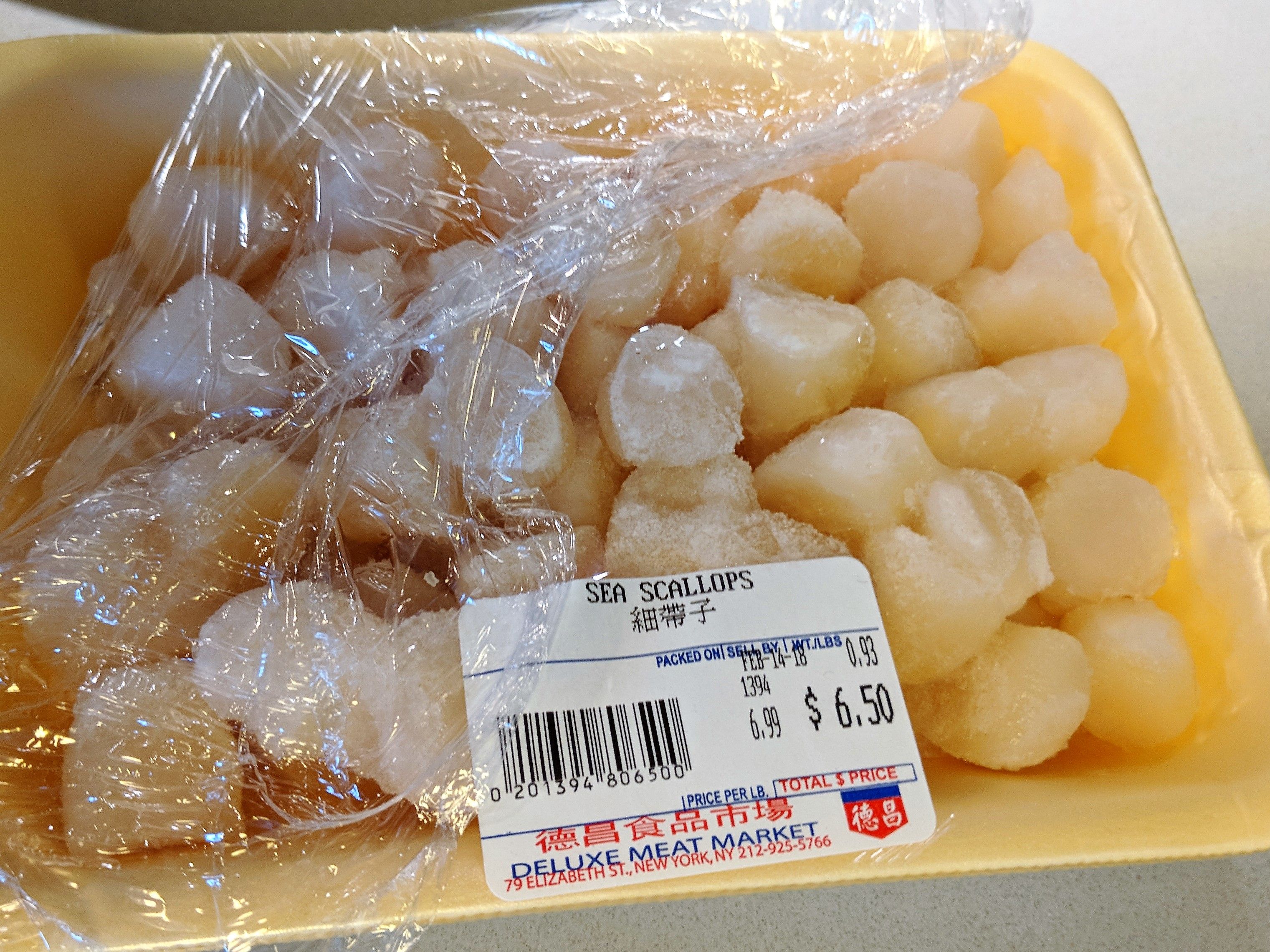 I know, these instructions are kind of terrible. I think I wanted to share what was in it more than the process.

And this is what you get in the end! If you ask me to cook this it would probably take me awhile to do, but my wife is pretty efficient at that process. She just tells me to peel the taro, because that part is not so much fun.

Opal, who is a married dog, reunited with her lover. This is her in her Chinese New Year themed outfit! 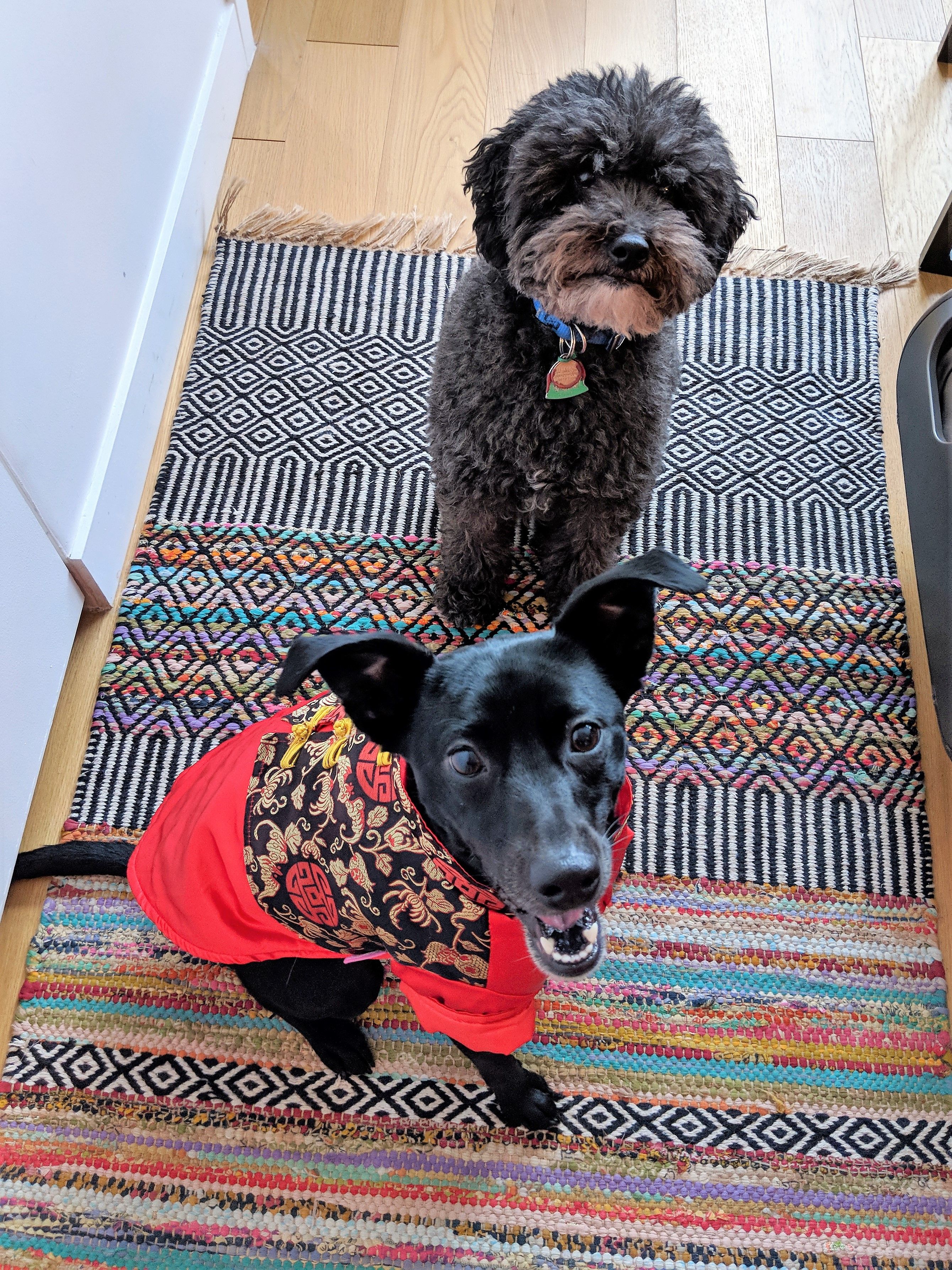 And she was a tad too excited to be with him. The groom, not so much. Working abroad and probably has a separate lover on the side. Opal wants to hire a private investigator. In the meantime, she wants him to know who wears the pants in the family. That's how. Almost knocked over a table of foodstuffs too. Crazy dog.

Things I remember talking about:

We also prepared a few activites for everyone to do. This reminded me of something I did in my childhood Chinese school. 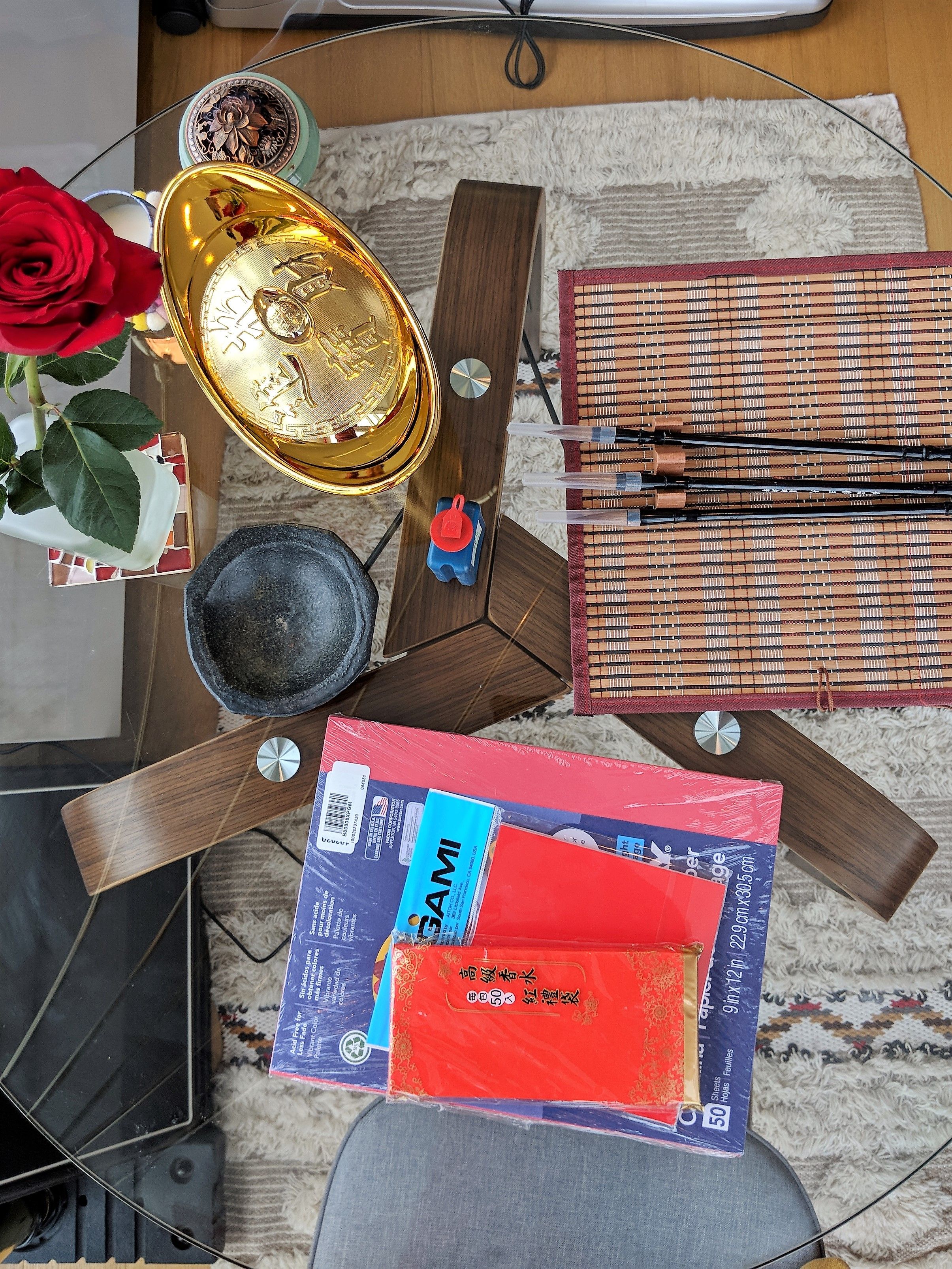 Calligraphy table setup. There's a brush, red paper, and ink. There's also a golden boullion container that contains candy. I think it's some hardened plastic material. Stronger than I usually find them, we bought it at Costco. Here's a sample of some stuff people wrote. Some of them did a good job. I did not do it for some reason, was too busy chatting with folks. At some point I'll probably give it another go on my own time, I remember it can be pretty fun. 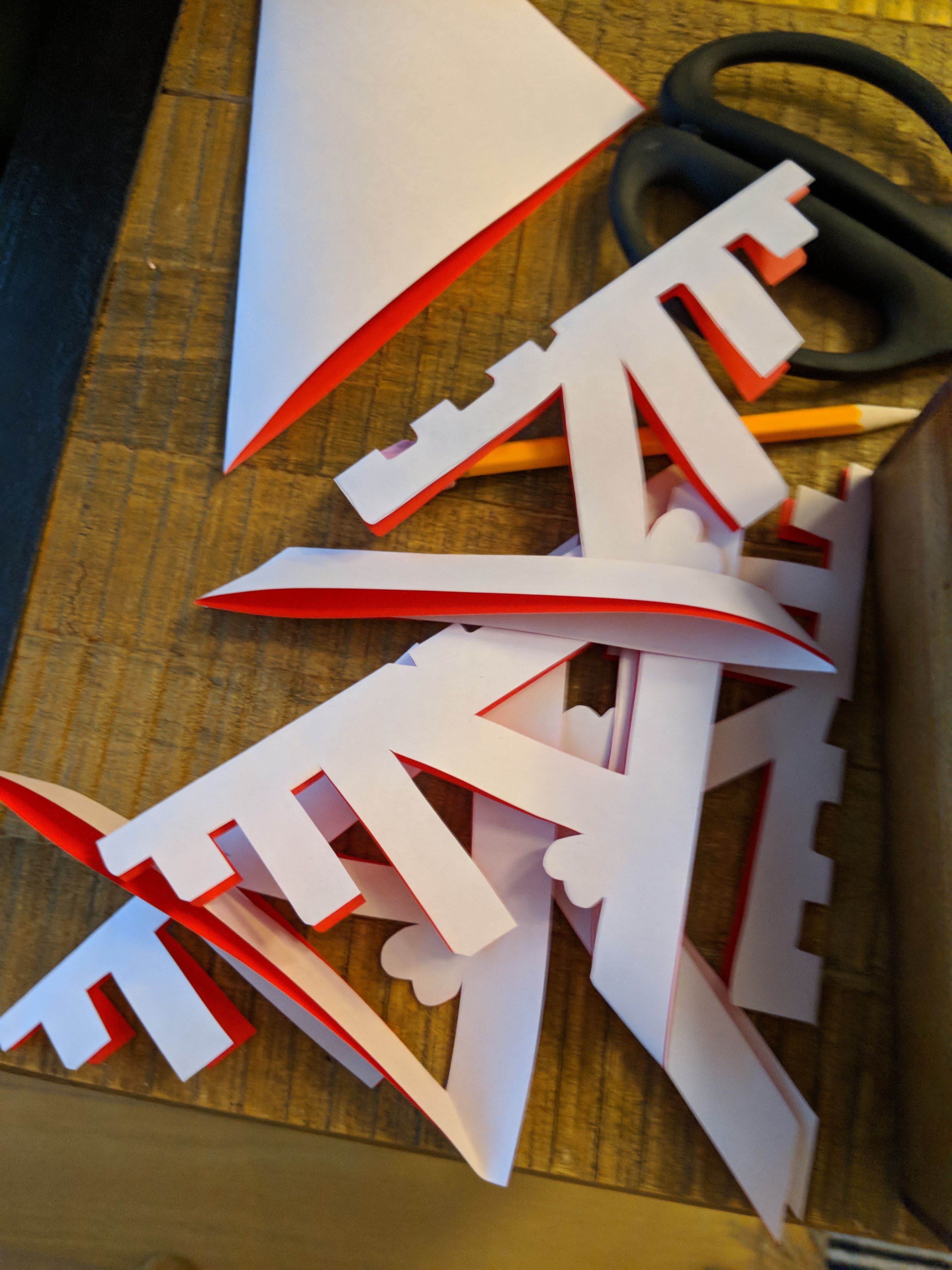 A few of us cut out a decoration that outlines the word for spring. Here it is unfolded. This one kind of looks like a bug. Another tradition is to hang it with the character upside-down. The phrase "Spring, upside-down" in Chinese is a homophone to "Spring is here", so that's always a fun visual pun that amuses me.

This is a video showing the dumpling wrapping that we were doing. I helped with the eating part of it.

Now that I type that all out, I realize why I am just exhausted. So much going on, but really it's the cleaning afterwards. Accompanied with a good old drink as well. Anyone have this before? It's tasty, good dessert liquor.

Anyway hope you all had an enjoyable day. If you saw that potsticker image above, after that one the surface of the pot was black. It's a cast iron pot, and I spent a good amount of time scrubbing it down and reseasoning the pot. At least I hear cast iron pots are very resilient, and no matter how much you mess it up you can get it to a good condition again with a bit of maintenance.

Click the banners to learn more about each community!
food life blog busy
4년 전 by eonwarped68
$11.30
80 votes
댓글 남기기 29
Authors get paid when people like you upvote their post.If you enjoyed what you read here, create your account today and start earning FREE STEEM!
STEEMKR.COM IS SPONSORED BY

Those sticky rice cakes fried with egg and flour batter I can just eat those all day. True if you eat too much it can make you feel bloated but then YOLO!

long rice noodles for long life and you doing calligraphy is awesome. People joke my handwriting is already calligraphy hahaha

Woah I want to see your calligraphic hand writing sometime. Or was that not actually a compliment if it's the scribble kind haha.

I always find it impossible to successfully sear those sticky rice cake even I dip each slice into egg batter as coating... Any tips to share on doing it right?

I also didn't get it right haha... I think having a cast iron gets a good sear though. Otherwise I feel more oil will do the trick. If you do that be sure to get a splatter screen though.

At least your first try in the morning was alright.

Oh yes, kind of like deep frying the cake at high heat. Thanks for the tip.

Happy New Year! All wives are super stars & magicians, husbands must work behind the scenes doing the 'not so much fun' jobs because wives are the star of the show in the kitchen, as you must know being the cameraman. My husband occasionally gets to do these jobs when he asks if I need help in the kitchen. But I too sometimes experiment with burning the food, but I didn't think to ask my husband to clean the burnt pot so thank you for your advice here, and a great post!

Oops haha... Unintentional advice. Glad I could be of service ;)

Yeah they are Superstars :)

Happy New Year Evan! You've had a blast definitely. I want to give those foods a try. :)
Then you and your wife are amazing hosts. My papa when he invites friends over, drinking is the main highlight of that activity. lol ^^

All that tasty food... I would kill for some dim sum... narrows eyes kill...

Happy New year to you too! I want more dim sum. I'll follow you.

Wow, that looks and sounds like it was a great time. So nice to have friends around like that. I can see why you said you were exhausted from cleaning the other night :)

Wowza Eon, looks like a fantastic party and such good food!!!
Would be so much fun to attend <3
Good work putting it all together :)

Wow what a feast! Looks like a lot of fun preparing all that food, and then sharing it with great people. I would love to try those rice cakes :p I can almost smell the goodness of food lol

A wonderful post!!!! I'm starving after seeing all that delicious food!!!!! oh how I miss good Chinese dumplings! I need to find a good way to make them without wheat flour hehehe

And she was a tad too excited to be with him. The groom, not so much. Working abroad and probably has a separate lover on the side. Opal wants to hire a private investigator. In the meantime, she wants him to know who wears the pants in the family.

HAHAHAHAHAHAHA!!!!! i laughed so hard - i wasn't expecting this at all hahahahah great post :) So glad that you had a fabulous time! :)

Glad that got a good laugh :D. Thanks!

hehehehe very clever! i really did enjoy the post immensely - and i'ts not just because i was hungry! hahahahaha

(although - i'm sure that played a part in it heheheeh)

What a wonderful celebration! Thank you for sharing pictures and thoughts about this tradition.

Those rice cakes look yummy and moreish (even the burnt ones). I hope your tummy recovered enough to enjoy the celebrations :D

Opal's CNY outfit is awesome. Those colours really flatter her. Here's hoping her good looks, personality and humping skills keep Deegan from straying too far. I laughed at the pic :p

Accidentally sending too much BTC: doh! Glad you got your opportunity to walk her through the payback process hahaha

Scary noises: this is a decent article to help (you don't need to buy their soundtracks; you can find similar on YT for free). It can make them worse if you overload the dog with too much. Slowly, gradually is the way.

Thanks Eon. I had a brilliant time hearing about your Chinese New Year.

Oooh. Thank you for the information, I will definitely take a look!

Love the limoncino and duck.

Nicely you made it this looks super nice thanks a lot for sharing it :)

OMG i just loved the food dishes they are prepared for love for everyone you had an awesome day with everyone wow :D

Happy New Year! What a feast! All day long! Fried Rice Cakes or sure! I love the decorations and the calligraphy!