Moon cake is the only name used in Vietnam for sweet cakes that are often used in the Mid-Autumn Festival. Moon cakes are usually round (about 10 cm in diameter) or square (about 7-8 cm in length), 4-5 cm in height, no bigger or even larger sizes. [first]. In addition, moon cakes have many other designs, but more common is the mother pig with herd, carp and so on. 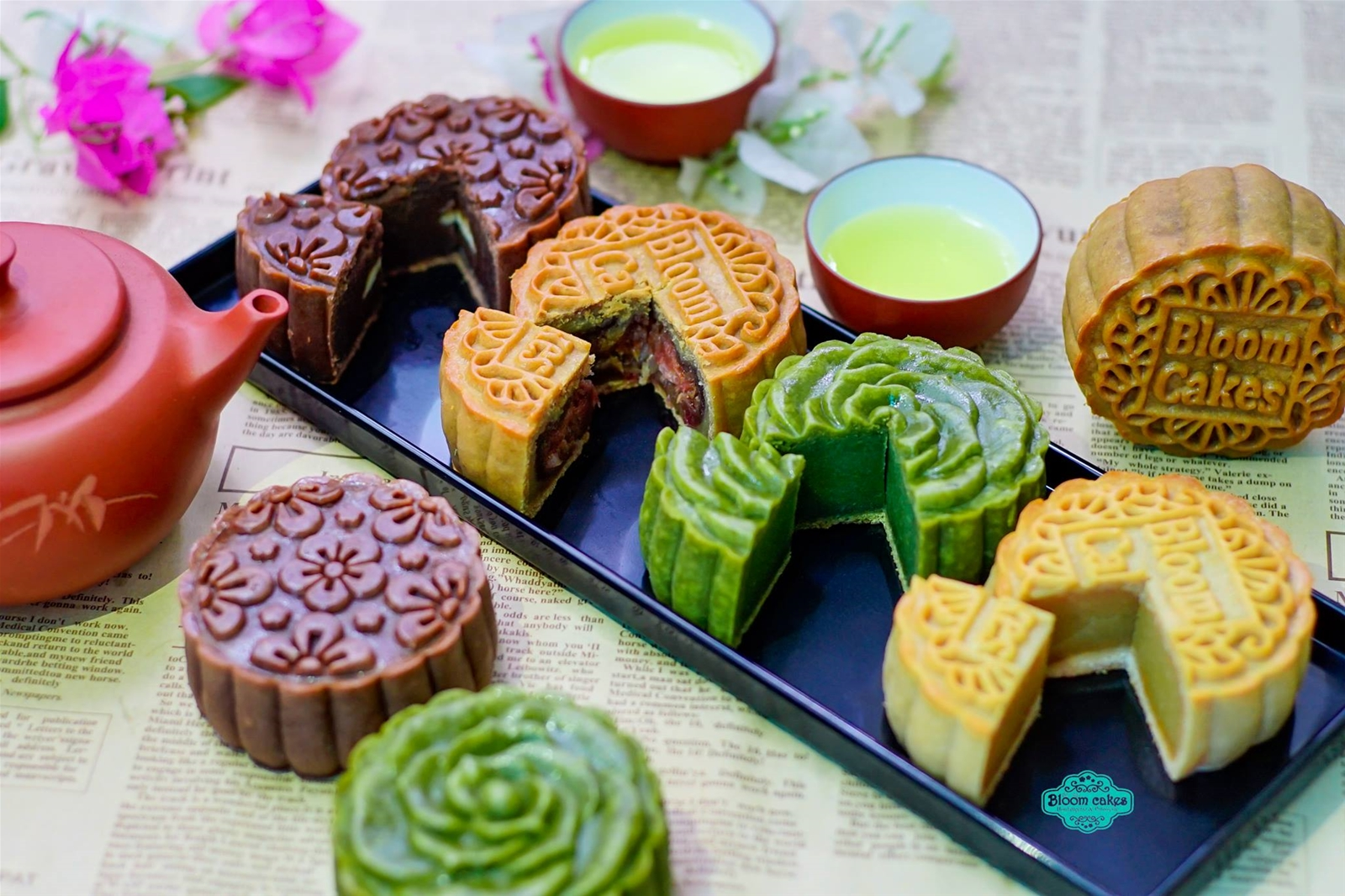 From tradition to modern:

The traditional moon cake consists of a thin shell (no more than 1 cm thick), made of wheat flour, low in flavor, very sweet and oily. Compared with western cakes, mooncakes are much sweeter. In the past, the buns were usually salted eggs representing the full moon. The saltiness of the salted egg seems to "neutralize" the sweetness of the other ingredients. Moon cake is baked after setting, rarely to be distilled or fried. In China, on the moon cake usually prints good messages (such as "Song Hy", "Cat Tuong"), or the name of the production base. Besides the symbol of the moon, Chang Nga, rabbit jade, flower shape, as additional decoration. 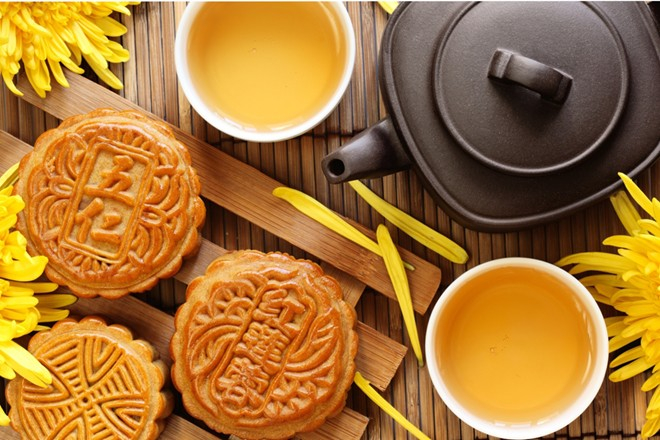 The modern moon cake is largely a refinement of the style of cake. If tradition is made with salted egg yolk, then it can be green beans, taro, jambon, aromas such as coffee, chocolate, fruits etc. In the 1980s, cool moon cakes were made. In recent years, there are also mooncakes for vegetarians (moon cakes). 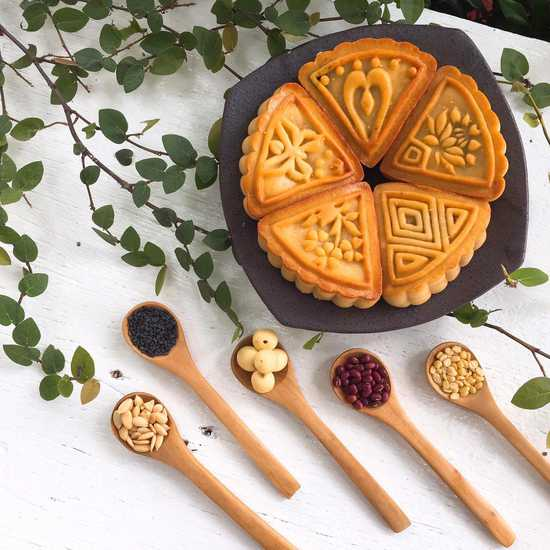 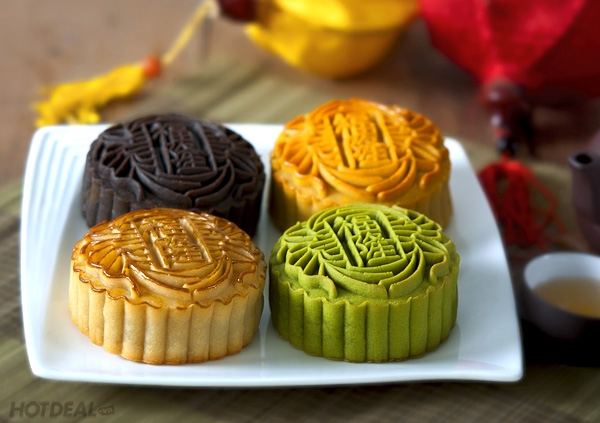 The moon cake is usually much more expensive than its actual value because the production and business is only seasonal and the serving market is only where the Mid-Autumn Festival is as influential as Asian countries. China, Vietnam, Singapore, Japan, Korea.

Moon Cake in some countries :
China: Cookies at a Chinese shop in Chinatown, San Francisco
In Chinese custom, Mid-Autumn Festival is also called Tet, when all members of the family gather. So Chinese moon cake traditionally has a circle, symbolizing the "union" and this meaning originates from the Ming Dynasty. Cakes are often called "moon cake", "moon cake" (月餅 "moon cake", Yuebing)The surface of the cake usually printed the letter implied auspicious. Today, mooncakes come in more shapes, including squares, shapes, and are made of a variety of novel ingredients, even divided into many typical Cantonese, Suzhou or Beijing varieties. . In Chinese literature, there is a moon cake mentioned in the novel of martial arts of the Long, the story of the Department of Luu Huong is the moon cake "Hang Nga hat" produced by Tam Nhat Khai, . 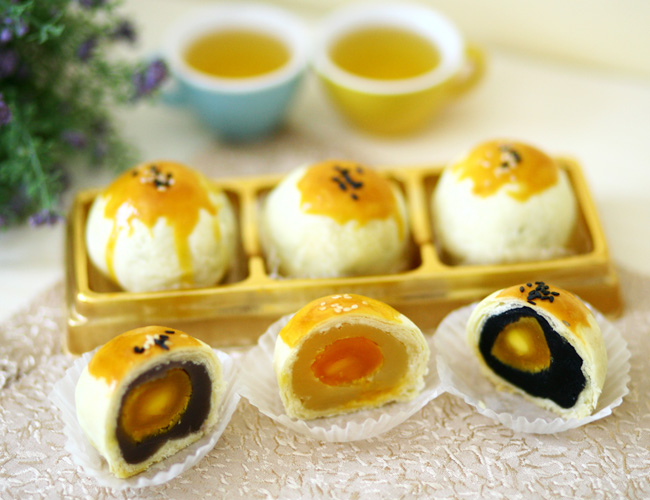 In Taiwan, the traditional moon cake is made from sweet potato. Nowadays, when culture is introduced, there are many new flavors such as ice cream, green tea, chocolate [3]. In Japan moon cake is sold all year round, in addition to mochi thick cake, Japanese moon cake never seems to contain salted egg inside. In fact, most Japanese do not know that there is such a moon cake.
The cakes used in the Japanese Mid-Autumn festival are Tsukimi Dango, a white, round rice cake, which is presented in triangles on a wooden shelf. 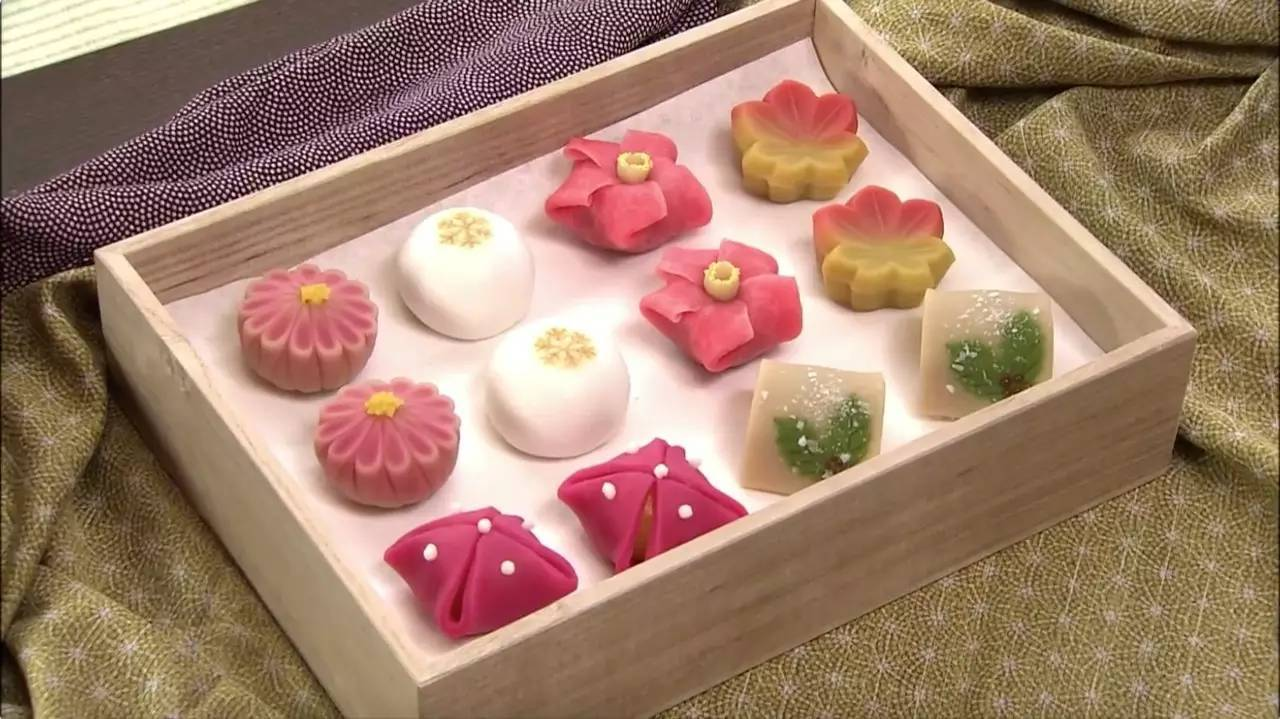 Koreans have two types of cakes, especially the songpyeon, semicircle rice cake and chapssaltteok.Songpyeon and chapssaltteok are used for Chuseok (Mid-Autumn Festival or Thanksgiving), a way to resemble Japanese mochi. Cakes, pies and pastries in a Vietnamese bakery
In Vietnam, moon cakes come in two varieties: baked goods and cakes. Traditional cakes are often green beans (or lotus seeds) or mixed beans (with ham, saffron, lemon, jelly, grease, etc.). Cake boxes usually consist of two kinds of pies, plastic cake, and during the break moon moon, two kinds of cake are eaten together, besides other foods such as rice (and spicy banana) ), pink, grapefruit.
Vietnam also has moon cakes, also known as fresh moon cakes, which have the same shape and shape as traditional moon cakes but are made from seagrass (jasmine). Bread like moon cake baked but soft, varied and cooked before being put into the cake. Bread is often soft, easy to combine with the soft and crispy of vegetables such as flan (caramel), green beans beat, milk jelly. This type of cake is usually free of preservatives, so it can only be used for short periods of time. 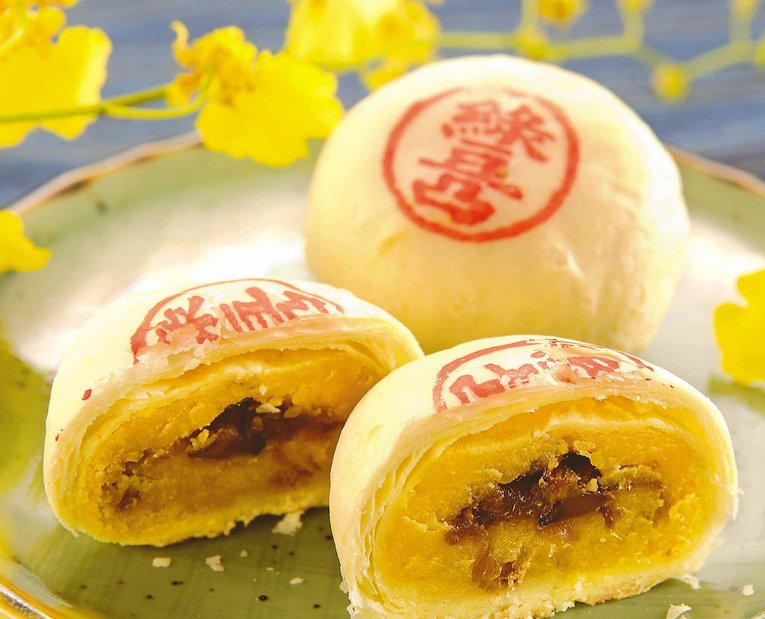 In the Philippines, a type of moon cake is known as hopia. This is a simple bakery, not a lot of color or texture but the kernel is very rich, attractive, usually contains green beans, taro, red bean, pork, purple sweet potato, or even Durian. The outside of the cake layer, eat a bit crispy. In Singapore, moon cakes look like Vietnamese moon cakes, but the taste is quite different. The cake is varied and more delicious taste, suitable for many tastes with many kinds of cakes like green tea cake or pumpkin pie, especially durian cake. The color of the cake is well matched with the inside, very attractive and eye catching. 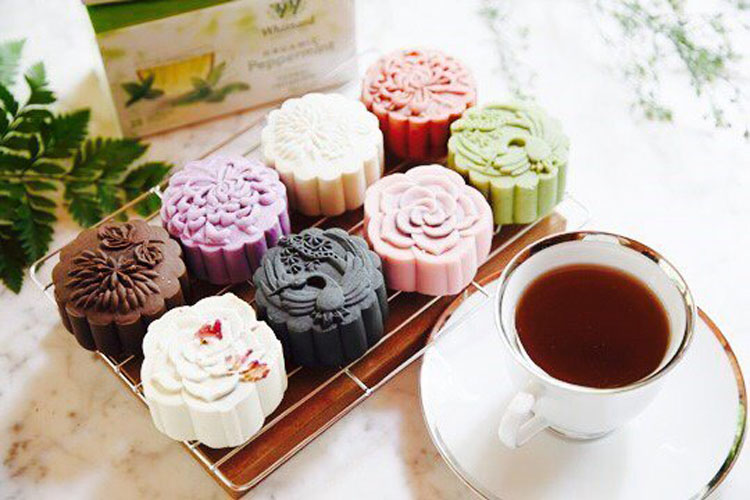 Moon cake in Malaysia puts the creativity in cake making to the top. In addition to the traditional cake, there are different shapes of cake such as oysters, flowers, stars, and especially many colors. In Thailand moon cakes with durian and 1-2 salted egg yolks are the most popular.

food vn blog photography steemit
4년 전 by nymp47
$1.35
5 votes
댓글 남기기 0
Authors get paid when people like you upvote their post.If you enjoyed what you read here, create your account today and start earning FREE STEEM!
STEEMKR.COM IS SPONSORED BY