3년 전
adamkokesh73 in freedom
When governments take on debt, it has very serious implications, especially for future generations. Because their primary source of revenue is theft, government debt is a promise to steal from someone in the future. In some countries, children today are born with a debt that would take them a lifetime to repay, even with extreme tax rates. When those who haven’t even had a chance to vote are forced to pay for the mistakes of past generations, that is intergenerational child abuse. 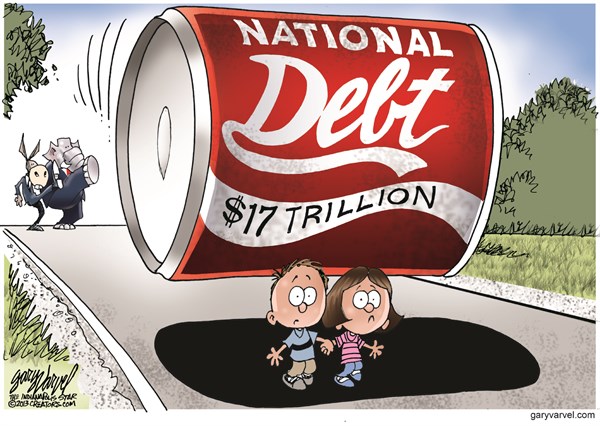 People under governments with runaway debt generally oppose increasing it. Many want to eliminate it altogether. We generally vote for politicians who vote for increased spending because that money goes to special interests that give some of it back to politicians, who spend it to trick us into thinking they’re going to change something for the better. Enough people vote for them, because we can be tricked into thinking we can vote our problems away and avoid critical thinking without adverse consequences.

Examination of this problem is very revealing about governments, because that which is wrong about creating an expectation of theft against the next generation, is also wrong about what is happening now. It’s not just about people not old enough to vote or influence the system, it’s about everyone who doesn’t get a real say in how that money is spent. That includes the vast majority of us. It should be no surprise that the greatest rackets the world has ever known have found a way to extend the ranks of their victims into the unborn.

What message does government debt send to young people born into debt slavery? This practice is not sustainable, and discontented youth will be the undoing of governments. Eventually a generation will come along and say, “It’s not my debt!” and simply disown it. Do we want to pass on to our children a free world of opportunity, or one in which they are born into debt slavery to pay for our mistakes? I am the author of FREEDOM!, a book endorsed (I mean banned) by the US Department of “Justice.” You can get a copy here. I’m running for Not-President in 2020 on the platform of the peaceful, orderly, and responsible dissolution of the United States federal government. You can find out more here. Whoever has the top comment on this post after 24 hours can claim a free signed copy of FREEDOM! by sending me a message with their address.
freedom activism anarchy politics taxationistheft
3년 전 by adamkokesh73
$79.66
82 votes
댓글 남기기 41
Authors get paid when people like you upvote their post.If you enjoyed what you read here, create your account today and start earning FREE STEEM!
STEEMKR.COM IS SPONSORED BY

excellent post @adamkokesh
debt issue is so troublesome, this problem is what is killing many African economies, corrupt and wicked politicians borrow billions of dollars for flimsy reasons and use it on failed projects and the result is keep servicing the debt profile while scratching the debt and for the international donors, its free money! consequently leaving little or nothing for the future generations. I guess a bit similar to the US as you pointed out but in Africas case, its a sorry situation. Thanks for sharing , following for more.

Thank you for the reply and agreed, followed you as well!

welcome as always. keep it up sir

Raise your kids to earn crypto instead of dollars :)

Adam. Haven't heard from ya. Lemme know if you wanna do and interview. We can acquaint my audience with you and your work. contact@highimpactflix.com Great stuff...peace.

If you would like to set up an interview please email my media coordinator and he can set it all up: marcus@thefreedomline.com

Just sent the email to Marcus. Hope it works out. Peace, my friend in Liberty!

yes i also said that @matt

You have strange formating my friend. It's like poetry but in prose.

Public debts have to exist for this system of fractional reserve banking to work. The public debt is the private wealth of banks. Too often people pigeonhole the symptoms without seeing the larger problem itself.

All it is centered?

But yes agreed on your point!

You could be the next Freenauts

Beep! Beep! This humvee will be patrolling by and assisting new veterans, retirees, and military members here on Steem. @shadow3scalpel will help by upvoting posts from a list of members maintained by @chairborne and responding to any questions replied to this comment.

Everything the government does out of force, we can do voluntary and likely find better alternatives. Have you read my book yet?

You're in the right place, mate. Stay curious. There are excellent answers to all of your questions.
Voting isn't choosing. When you choose, you get what you chose. When you vote, you get what the majority chose. It's a very important distinction. Voting also isn't choosing, since you're not given the option of not being governed at all.
I can choose vanilla, chocolate, or rum n raisin icecream. I can also choose no icecream.
If you're forced to eat icecream, despite being lactose intolerant, being given your choice of flavour isn't particularly empowering.

Thanks, but I'm not sure I agree with the metaphor. Voting for our elected officials is not just one choice and one outcome, right? We elect a representative, a senator, local leaders, state officials, and the president. There's also the presidential primary, and primaries for each of the other elections. So, Because we have a two party system, there will always be compromise. As opposed to a multiparty system, like in many Euro countries, where you are more able to elect someone who favors your specific policy preferences.

The way I see it is - in the US, we work out our differences in the primary process, and then winner takes all in government. Whereas in a multiparty system, you elect more extreme officials in general, and they duke it out in the legislative process more.

They're distinctions without a difference.
They rule 'by the consent of the governed'.
How does one withdraw that consent?

By voting, right? The problem is people don't vote. You withdraw your consent by saying - "I'm going to organize, do my civic duty, and vote yo ass out."

You can't vote against people, you can only vote for them. Either way, whether the guy you voted for wins or loses, you're going to be governed.
How does one withdraw their consent to be governed by anyone?
If there's no way to do so, then how does it qualify as consent?

Also, I just think we don't teach kids civics well enough. I went to a decent public school, and I didn't have a civics class. At all. I had to learn in college.

So, if anything, voting in the primary is really much more important and more empowering choice, perhaps, than voting in the general? Although, it would be silly to not do the latter.

It's like the marijuana debate - many people think it's wrong to criminalize marijuana, so we are seeing a gradual movement toward legalization. Our democracy is a constant ebbing and flowing of change. I believe our system would work better if everyone participated, rather than only half or less of people who vote every 4 years.

It seems to me that the people who complain about taxes probably have too much money anyway. I mean don't we get quite a bit from our tax money? I mean, yes there is lots of waste, but people don't pay enough attention to the government, or participate enough. If average people organized... at all.. at least more effectively, we could be a force that could take on the monied interests that hold the attention of our government.

Great perspective @adamkokesh
I have and am witnessing this in #Lebanon, take a look at my article if you are interested.

And i want you to know I got your back on the mission! Looking forward to reading more of your content

Congratulations @adamkokesh, this post is the third most rewarded post (based on pending payouts) in the last 12 hours written by a Superuser account holder (accounts that hold between 1 and 10 Mega Vests). The total number of posts by Superuser account holders during this period was 867 and the total pending payments to posts in this category was $3277.28. To see the full list of highest paid posts across all accounts categories, click here.

If control over money supply is taken from politicians, they'll no longer be able to overspend and devaluate national currency.

That's why I support crypto. It's independent from any politician's spending habits.

So very true yet another reason to rid ourselves of these government types !

Bangladesh also making our children's future in a problem by taking huge loans from many organizations and countries.