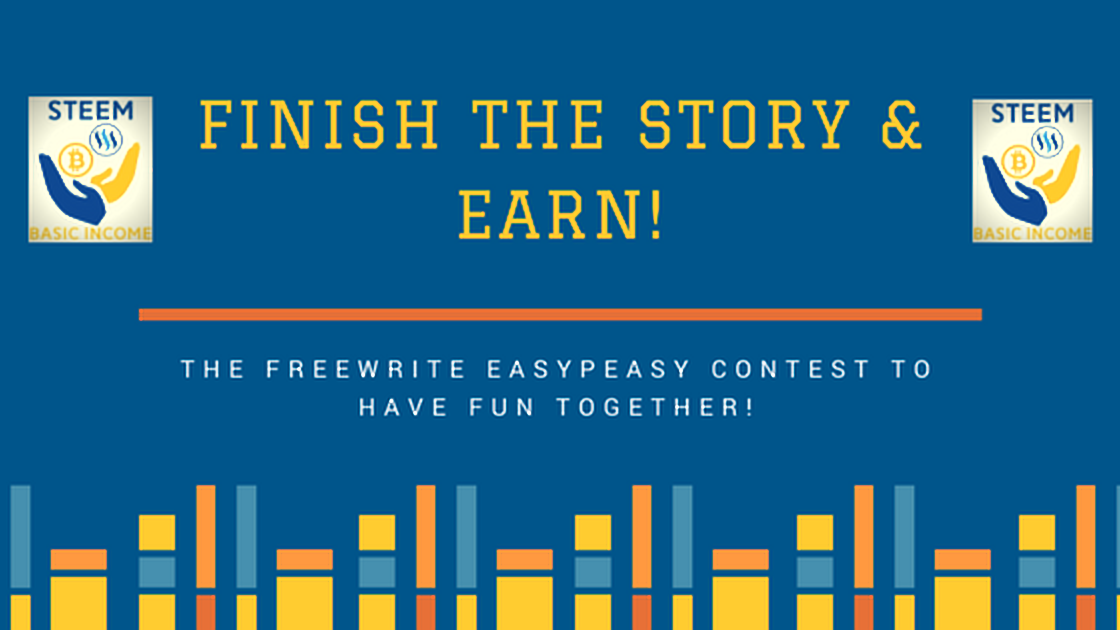 Dear friends, thanks to you all for participating to day #4! Last week it's been a great fun and you have exceeded yourself! I admired your vivid creativity which outmatched my first part of the freewrite.

This week I will confirm a pot of 2 SBI per day of contest: let me share the fun and wealth as much as I can with all of you freewriters!

1. I write an unfinished fiction story/freewrite

3. I will donate up to 2 @steembasicincome shares to the freewriters with the most interesting, fun, original, crazy ending (I'm the unquestionable judge. Well, technically not me.. the bananafish voices within my head are).

It's super simple and I hope we'll have loads of fun together! Basically you comment, as you always did, just this time you can be rewarded with one or even two SBI share!
Nothing is mandatory here..Just enjoy and prepare for a trip into my delirious fiction world!

For those that don't know what the @steembasicincome is, we're talking about a great project run by @josephsavage which - based on your amount of shares in it - will grant you a permanent vote on all your posts!

Here you will find their most recent post with details

Too much writing! Here's the story based on @mariannewest today's prompt "syrup":

Bathed by the purple light of Segesta, the moon-oracle, the chief minstrel admired the suspended city of Taqrah from the watchtower.
Soon he would return to its opal walls, climbing one of the twenty compressed-air tubes that could carry you from the ground to the floating city in the blink of an eye.
His mission was coming to an end and, in all truth, he was not so keen on returning home. A voice behind his head whispered mellifluous and insidious that the Council of Bards would not be enthusiastic about the songs he had collected to enrich the immense main archive.
It is true that since he had been accepted as a citizen in Taqrah, on the wave of his growing fame, he had been accepted as a brother. Almost.
Of course kindness had always been there and he usually filled the amphitheaters like few other singers. In the city the elders competed to host him for their lavish banquets. But something wasn't realyl matching in the picture. More and more he felt he was missing a detail, a relevant one. A sense of strangeness, of unintended implicit withheld whispers, games of looks that he could not completely understand. Now, thinking about it, he was almost certain that they sent him on mission more and more often just to keep him out of the game. Could it be just his paranoia? The problem is that weeks ago he had found that note on the ground, slipped by the tunic of Balaen-Dar, the head of the Bard's Council. The note repainted with a tremulous hand "today it's green syrup No. 5". Very strange.
At first he had shrugged, but then in his mind of minstrel, trained to the art of memoriseing every detail, many things had joined together .. and he discovered that they matched like puzzle pieces.
Everything spoke to him about a syrup. The hidden bottle, spreading from the folds of the tunic of the elder during the festival of a thousand voices. The strangely stunned look of Malyeth, her favorite maid, when he told her she needed a syrup to soothe his vocal cords. What did the meanders of that harmonious and luxuriant city hide? As he was walked toward the pneumatic tubes he promised himself he would find it out.

Also this week, I will run 3 rounds of this contest: mon/tue/wed. All the results of this week will be out on Monday 12th March, 11 pm, UTC +1 (i.e. California is UTC -8).
And now, dear friends, it's time to drink your special syrup and let the journey begin!

freewrite contest steembasicincome give-away fiction
2년 전 by f3nix59
$1.41
33 votes
댓글 남기기 13
Authors get paid when people like you upvote their post.If you enjoyed what you read here, create your account today and start earning FREE STEEM!
STEEMKR.COM IS SPONSORED BY

These thoughts distressed the chief minstrel while the suspended city sucked him at great speed towards its beating heart, through the pneumatic tube nr. 18, his favorite. In his absolute ear, the suction resounded like a sweet minor A.

Taqrah was like an immense floating bagpipe that was breathing sounds of all kinds. That was what attracted him the most, in the beginning, but now, while he hustled across the narrow streets to reach the Main Hall, he was crushed by the sensation that the city was unceasingly ruminating and digesting those sounds, milling them in a shapeless mash.

The Council of Bards in full force was waiting for him in the Main Hall with its algid marble and its vertiginous seats. When he entered the Hall, everybody, even Balaen-Dar, leaned forward with an almost paroxysmal expectation.

The chief minstrel swallowed loudly and began in a tremulous voice to make his report. With his eyes he looked for some sign of the mysterious syrup: a little bottle protruding from a pocket, a sticky spot on the corner of a mouth ... but nothing.

As the songs he had collected were sung, his confidence increased.
Contrary to what he believed, the Council was finding them very interesting. Perhaps, after all, it was just paranoia, he told himself. The old Balaen-Dar almost choked with laughter when he sang Old Floppy Bag Blues, although it was a clear satire on the figure of the head of the council itself.

When the exhibition ended, there was a thunderous applause.
"Wonderful!" Balaen-Dar said. "I think, esteemed maestri, that given the peculiar spiciness of the collected material, this will be a full-bodied red syrup No. 7!"

The minstrel chilled suddenly, while a complex machinery, so far remained hidden in the ceiling, slid down on him with squeak of pulleys, like a condemnation.

"You proved to be one of the better chief minstrels we had on Taqrah since the foundation of the Council. The songs you collected in the world below will guarantee us many years of vital extension."

Balaen-Dar was very satisfied, while the machinery inserted roughly its tubes down the throath of the terrified man, starting to suck away all the songs. He couldn't resist to the inducted urge to sing again, but this time it was a forced, unnatural sing, at a nearly unbearable fast speed.

The Bards of the Council extracted their small, fancy bottles from the meanders of their brocade tunics, and merrily lined up to fill them at the other end of the machinery, where a dense vermilion syrup was distilled.

"Unfortunately, the process that give us immortal life is also destructive for the vocal cords of the donor. For that, it's customary to search for minstrel chiefs among the strangers. But don't worry! You will be relocated to Mime Island, where you can enjoy a lifetime annuity!"

Hahaha weeeee! This is orgasmicly original! (And after this one I finished the superlatives). I'm starting to think.. Is it possible that this is the formula for producing great fiction writing? One+two+joined review. For sure a book of small stories. We definitely have to stop farting around (reconnecting to your freewrites) and start writing seriously. Oh btw.. this time everyone's getting the share. I won't even dare to choose hahahaha 🍌🐠

Bravo! I sure wasn't expecting this ending and "Mime Island" was the perfect place to be sent, considering the circumstances. : )

He had only taken 12 steps when he had a vision, telling him to go to the corner of 5th and Skyfive. There he would find the Clover Meister who knew all about Green Syrup #5. He lived in a shack, a real dive. Green Syrup #5 was going to be slipped into one of his drinks or meals, so as to destroy his minstrel voice and mind. He would become an embarrassment to the city of Taqrah, and then they would relinquish his citizenship. They had a natural-born citizen hidden away to take his place.

As he followed his vision, sure enough, he found the Clover Meister and all of his suspicions were confirmed. The puzzle was now complete. The Clover Meister made him a green syrup concoction and poured it into a little bottle. He was instructed to take a sip of Clover Syrup #9 if he ever felt confused, and it would counter-act the effects.

Sure enough, after the chief minstrel returned to the city of Taqrah, that time came after he dined. He closed his eyes and took a drink of...Clover Syrup #9. His mind of minstrel had never been clearer, and 3 of his vocal chords that had been dormant for years came alive; he could even sing the jive. His vocals were like a bottle of fine wine that aged over time. His fans were more enamored, along with the Balaen-Dar; the head of the Bard's council; an impossible feat. This chief minstrel was here to stay, and nothing or no one could, or would ever try to replace him again. It would just be a waste of time and as history will tell it, no one ever crossed that line.

Beautifully complex.. you took time and energies to create a plot that surprised and amazed me. I loved the Clover Meister character 😁🐠🍌👍

A compliment coming from you couldn't be better and you have made me very happy! You sure are a hard act to follow. Who else would come up with a suspended floating city, but you! LOL! Where is my competition? I don't want to win by default. It is so nice of you to have this fun contest and to give such a great prize. Thanks for the chance! : )

Well I have to say that you also surprised me.. somehow here you're all lonely for now but the best thing for me is that we painted a beautiful world together ☺️ from a certain perspective this could also be seen as a gorgeous wewrite!

You make me melt. A gorgeous we-write it is and one I will always remember. I have company now...YAY... and Marco's addition is amazing! : )

A captivating and compelling tale indeed.
And here’s your challenge for today: https://steemit.com/freewrite/@mariannewest/day-139-5-minute-freewrite-wednesday-prompt-artichoke

Pink syrup No. 4 did nothing for his weakened vocal chords, "all the rage my ass", he said. He sounded worse after downing a bottle, plus he pooped fucsia. It was time to enter the tubes and propel upwards towards the city. He would just have to sing in a range, that he could handle. Once all the elders fell in love with him again, they would be putty in his hands. He will court Brunella, the principesa of Taqrah, and win her love for him, then he won't have to entertain these elders again, once married they will run the city forever...