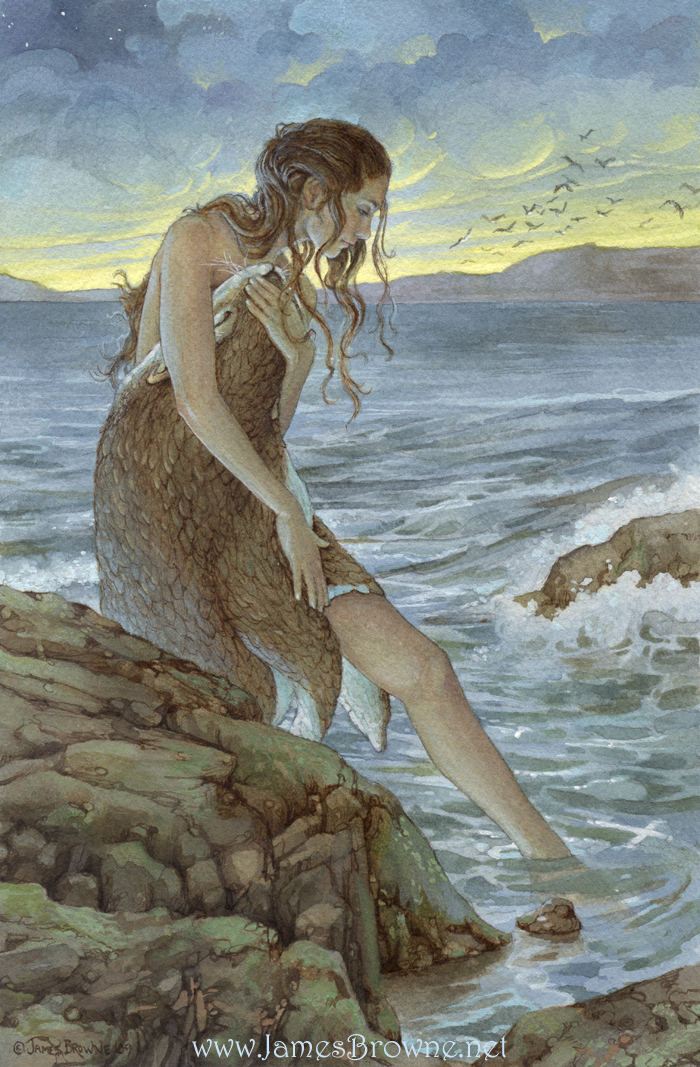 After only two months, Helen decided to become an exotic dancer. It was a little step for a human being, but a huge leap for a selkie. Helen passed the first nineteen years of her life as a seal in the cold ocean. Her siblings approached the rocky coast of Galway, curious about the life in the land, and eventually approached humans. They learned to shape form, they became beautiful girls, they lured handsome fishermen, but Helen was more interested in swimming, eating fish and exploring the vaste sea realm. But, at her nineteenth birthday, none of her sisters came up. She was left alone. So, she decided for the first time in her life to approach the strange land of humans, where her sisters had gone. She tried very hard, hidden between the rocks in the shallow water, until she gave off a pair of long legs, long curly hazelnut hair, a graceful shape, and turned her skin to a tawny complexion.
Staggering the first steps on the shore, her adventure in the real world began...

"I decided the only solution was to seduce him" said Helen, smoking nervously a cig. They were seating at a small table in the club, two glasses of whiskey on the rocks between them. Her stint as a beautiful girl went wrong, according to her story, when the owner of the night club caught her transforming in seal for a nostalgic dawn swim. The man, Patrick, was the first to see her potential back when she became human, and improvised a naked dance, with moves never seen before, at the music coming out of the club door. She was beautiful, she seemed not of this Earth, she hadn't any shame to show her body... so, instead of calling the police, he offered her a job in his club. But he became curious about where that mysterious girl went every morning, after closing. So, he managed to follow her and caught her secret...

The way she made tea is what I miss more of her. Her tea contained all the aroma of the sea, the foam of the waves, the cries of the seagulls. Drinking it was balsamic for the body and the soul. I wish she stayed with me forever, but this is the destiny of the selkies, to live as women only for a while, then leaving behind them only broken hearts. I know it when I cross the sad look of the fishermen. We don't speak, but we all know. It's to relieve their pain that they come to the night club every night, but what they desire has disappeared forever in the sea.
"Hi Patrick", they ruefully greet me, when they sit at the tables, giving less glances to the pole than to the windows overlooking the bay.

This post is part of the 5 Min Weekend Freewrite 5.

All images are my own unless otherwise cited.

Thanks for reading! If you liked, please let an upvote, a comment or a resteem.

freewrite weekendfreewrite writing challenge fairytale
2년 전 by marcoriccardi59
$0.71
35 votes
댓글 남기기 13
Authors get paid when people like you upvote their post.If you enjoyed what you read here, create your account today and start earning FREE STEEM!
STEEMKR.COM IS SPONSORED BY

This is such a beautiful story!! So, so love it!! And watch out for your heart when you meet a selkie
https://steemit.com/freewrite/@mariannewest/day-45-5-minute-freewrite-prompt-the-smell-of-a-dumpster

Once, I thought I'd almost met one... but it was long ago, now to be safe I'm in a relationship with a mountain girl ;)

mountain girls are much safer!!

I love your stories and where your mind goes.

That, my friend, is a very interesting fact you gave me!!

I learned something new today and INTERESTING!

Thank you SO much for that!!

Does this mean you are looking for an Irish girl to marry? do they have to cook Italian food though?

Oh, so many questions now! LOLL

When I was 18, I was totally obsessed by Ireland and celtic atmospheres... I would have given everything to find a fairy girl with red hair, green eyes, and a lot of freckles. Actually, I found her, but life goes on and it did not last. Now, I'm happy with my girlfriend, that is of quite different kind ;)

For the other questions: I'm not thinking about marriage at all, LOL; and I love food from every part of the world...and I appreciate when my girlfriend cooks for me, but I do not consider it a thing that a woman must necessarily do. I often cook for her, or we buy takeaway ;)

takeaway is wonderful!! :D we had that last night because I was just too tired.
and yes, I think cooking should be a two-way street and my husband does cook but makes such a mess that it's just easier if I do most of the cooking. loll

and I'm happy to hear you found your selkie, even if for just a little while!

The @OriginalWorks bot has determined this post by @marcoriccardi to be original material and upvoted(1.5%) it!

This is impressing. It looks like a novel of.. Salinger? You went into details and memories with a lot of authenticity. I think this piece is truly valuable.