Dragon's Crown Pro review - Has it and flaunts it

When Dragon’s Crown was released in 2013, the artstyle had everyone talking. Whatever your take on it, it produces unique visuals that demand your attention. Vanillaware understands this all too well and gives Dragon’s Crown Pro the 4K treatment. The game gets a new spotlight that it just loves to hog, to show off every curve. And seeing that Dragon’s Crown Pro is a beautiful game in terms of art style and gameplay, who could blame it?

Dragon’s Crown Pro’s gameplay is a logical extension another last Brawler/RPG-hybrid that George Kaminati worked on: Shadow over Mystara. Instead of a beat-’em-up with some light RPG elements that lasts for about two hours, Dragon’s Crown Pro adds to that concept with a hub town, adjustable equipment and side missions. The total playtime gets upped significantly, not in the least because all of the six selectable characters have their own play style. The Elf keeps her distance to attack with her bow, while the Fighter challenges the front lines with his sizable shield. Dragon’s Crown offers a lot of variation and invites you to play through the game with multiple characters.

It certainly doesn’t seem that way from the start, though. The game starts out being very strict about where you can travel to. The levels are noticeably short and the end seems to approach very rapidly. As the game progresses you unlock new gameplay elements, like the ability to visit an alternate route or cast powerful rune magic that reveals secrets. The nine levels get a ton of replayability that way and the many side missions you can undertake won’t cause them to grow stale.

The original Dragon’s Crown was criticized for its narrator, that constantly repeats his Dungeon Master-esque lines. Even though Dragon’s Crown Pro doesn’t introduce any new dialog, the script has now been narrated by the full English and Japanese voice cast. All of them put their own unique spin on the narration, so if you’re tired of one voice you can easily swap it out for another. It seems like a small thing but it simply keeps the game from becoming repetitive and boring.

Dragon’s Crown Pro lifts the graphics of the original to a higher level. The controversial, hand-drawn art style gets a lot of mileage out of the upped resolutions and even if you don’t own a 4K TV, the difference is like night and day. The chiseled Dwarf and the voluptuous Sorceress are on full display here and belong to the best that Vanillaware has to offer, thanks partially to a rich color palette. The game is not shy to show off its curves, and to the extra polish adds even more confidence to its posing. 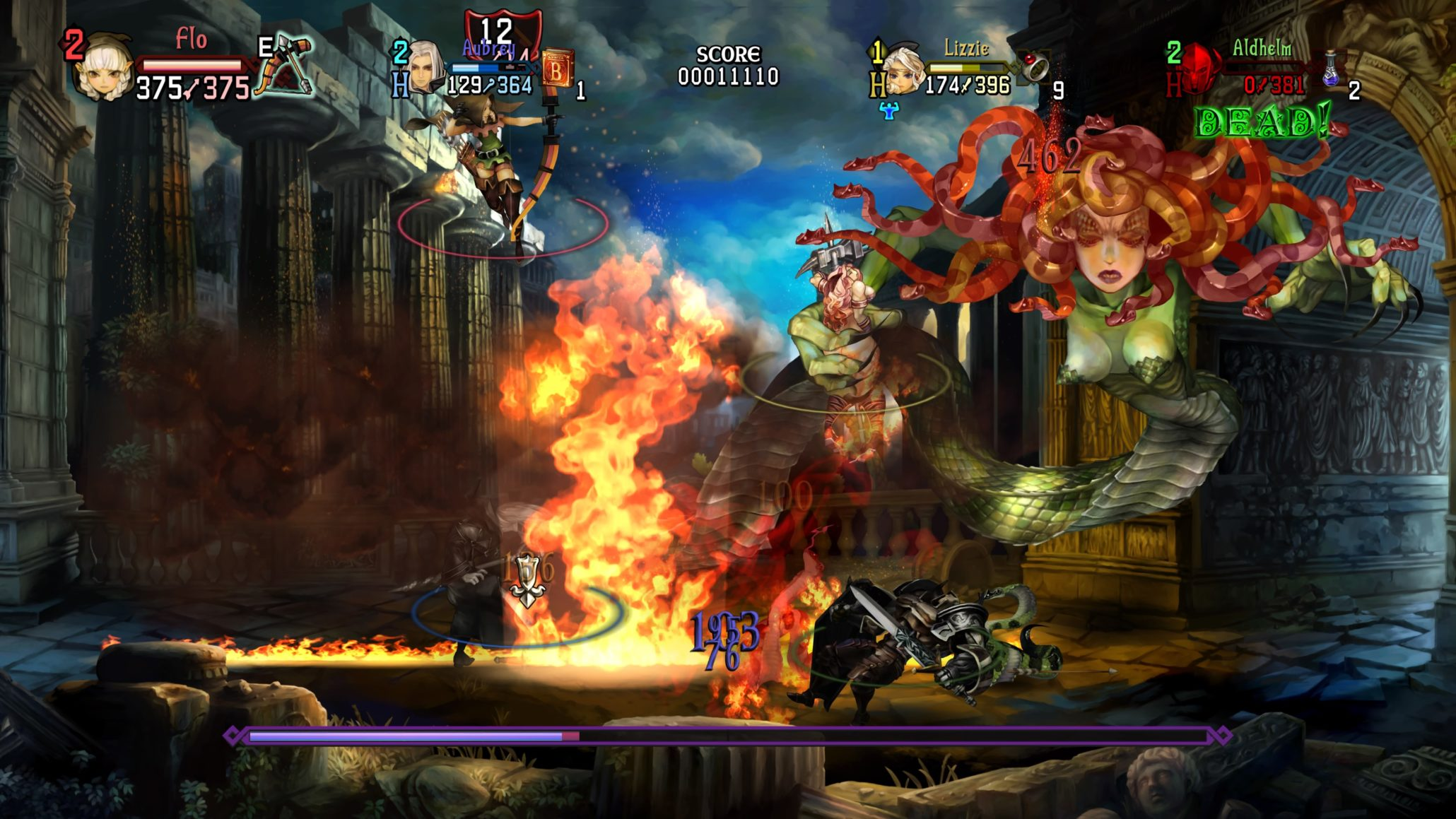 There is another side to the coin, however. The sprites are large, detailed and that is doubly true for boss monsters. Add the fact that you play Dragon’s Crown Pro with three (AI driven) companions, plus the chance of a large number of monsters on screen and you have a recipe for chaos where you completely lose track of what’s going on. There are some UI elements you can turn on to alleviate this, but it’s just not enough. Sometimes bashing the attack button and hoping for the best is all you can do. The overwhelming art style is both Dragon’s Crown’s dearest friend, as its worse enemy.

All in all, Dragon’s Crown Pro is the best version of the game and also one of the best Brawlers that you can play on the PlayStation 4. The game offers robust action-RPG gameplay that not only plays tight, but looks tight as well. That the action can become overbearing at times is a sacrifice you could live with. Very replayable, beautiful to gawk at and rock solid gameplay, Dragon’s Crown Pro would love to play with you.

The game comes out on May 15th for PlayStation 4, and since the embargo has finally lifted I’m going to stream this game on Wednesday, May 9th around 8 PM CET. Hope to see you all there!

gaming review writing playstation4 steemgc
4년 전 by lethsrock50
$11.95
91 votes
댓글 남기기 3
Authors get paid when people like you upvote their post.If you enjoyed what you read here, create your account today and start earning FREE STEEM!
STEEMKR.COM IS SPONSORED BY Congratulations @lethsrock! You have completed some achievement on Steemit and have been rewarded with new badge(s) :