How to create a miniature succulent planter! 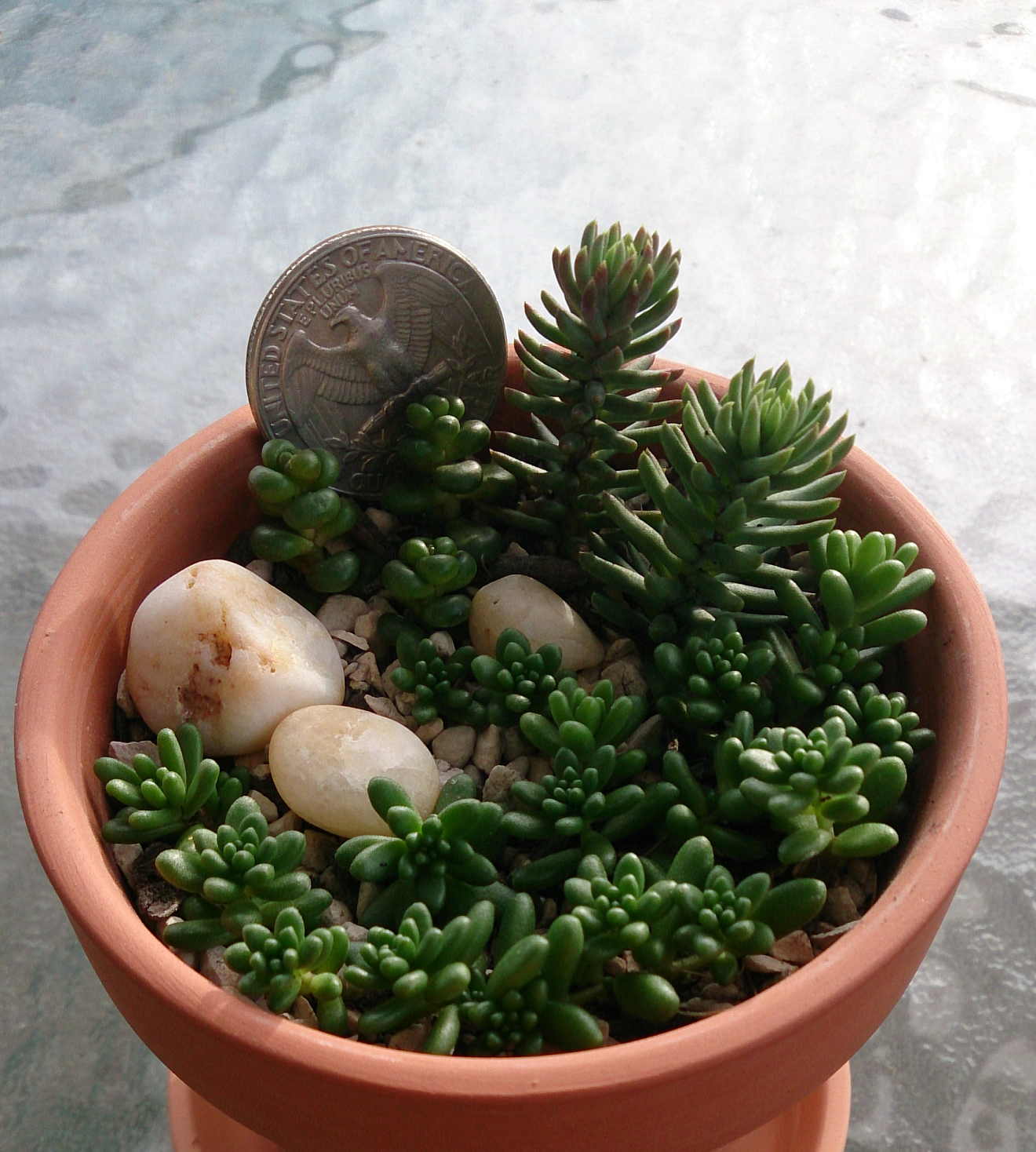 Succulent planters are very pretty, but can take up a lot of space.

I arranged this miniature succulent planter in a flowerpot small enough to fit in the palm of your hand! It's a charming little piece of nature that can be kept on your desk or windowsill.

In this tutorial, I'll show you how to prepare succulent cuttings and arrange them to create a similar planter. The terracotta flowerpots I used were 3 inches (or 8 centimeters) in diameter, but you can use any small container you like. I used three types of Sedum gathered from my backyard garden in my arrangement. These types of plants are frost hardy and grow quickly, making for attractive ground cover all year round.

They can be purchased at most garden centers for a few dollars per small container-- and one container is likely enough to make five to eight of these small planters, so if you want to prepare these little planters as gifts, it would be quite cost effective! 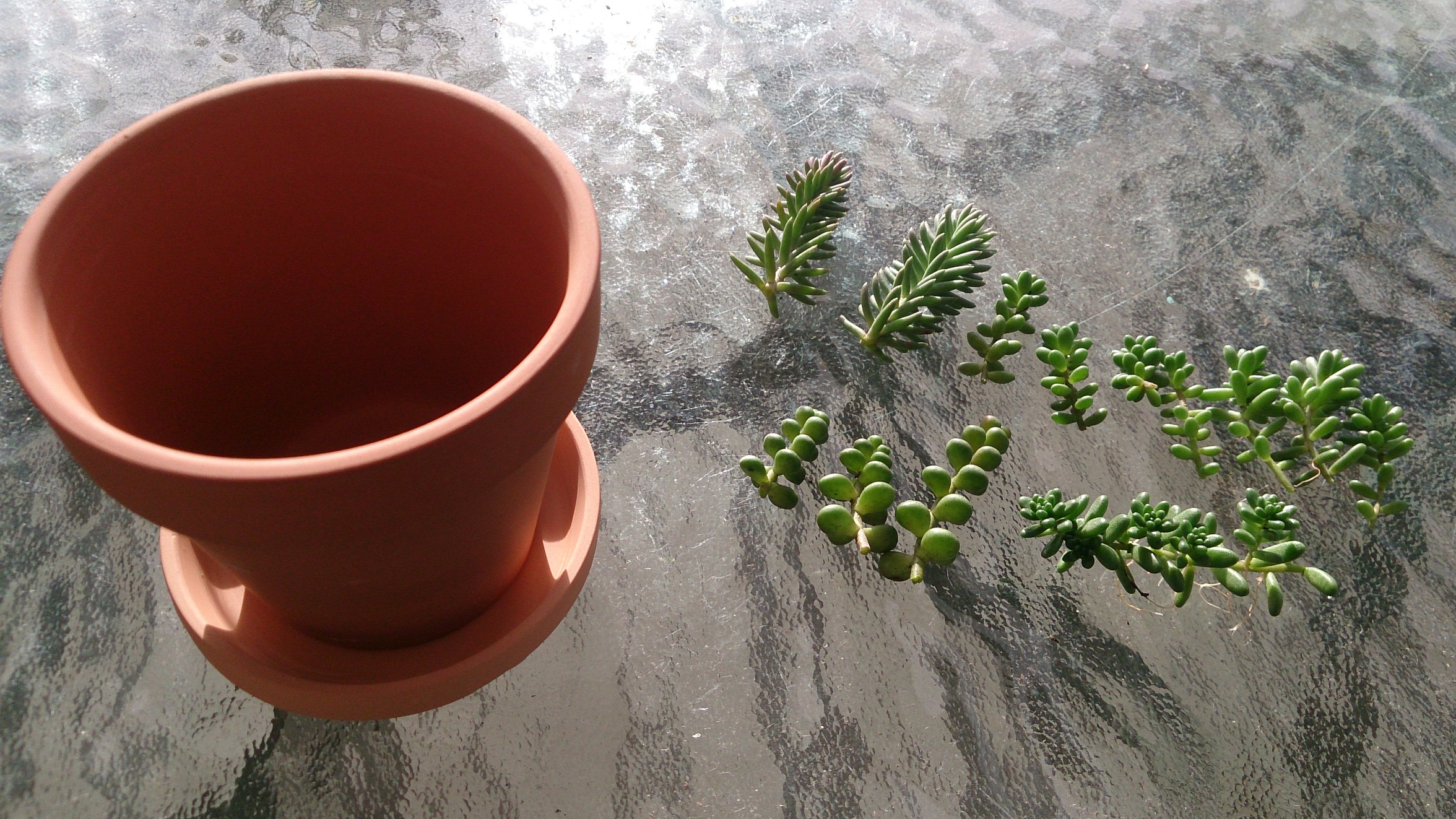 The terminal rosettes of the plants are the most attractive, so I pinched the plants about one inch from their terminal ends using just my fingernails. The stem of the plant is very tender so you can make a clean break this way, but if you keep your nails short it would be better to use scissors.

It's important not to squeeze the plant at all, so be very gentle when handling the cuttings. Take about as many cuttings as needed to fill up the flowerpot. You can always take more as you start arranging. All of the lower leaves up until the part of the plant that you want to show above the dirt must be removed. This can be done by gently twisting the leaves individually until they come off. It should reveal about one to two centimeters of stem.

Sedum is often a trailing species, so roots will sprout easily from any spot where a leaf used to be. If there are already tiny roots sprouting from the stem, leave them be, and they will help the cuttings establish more quickly. 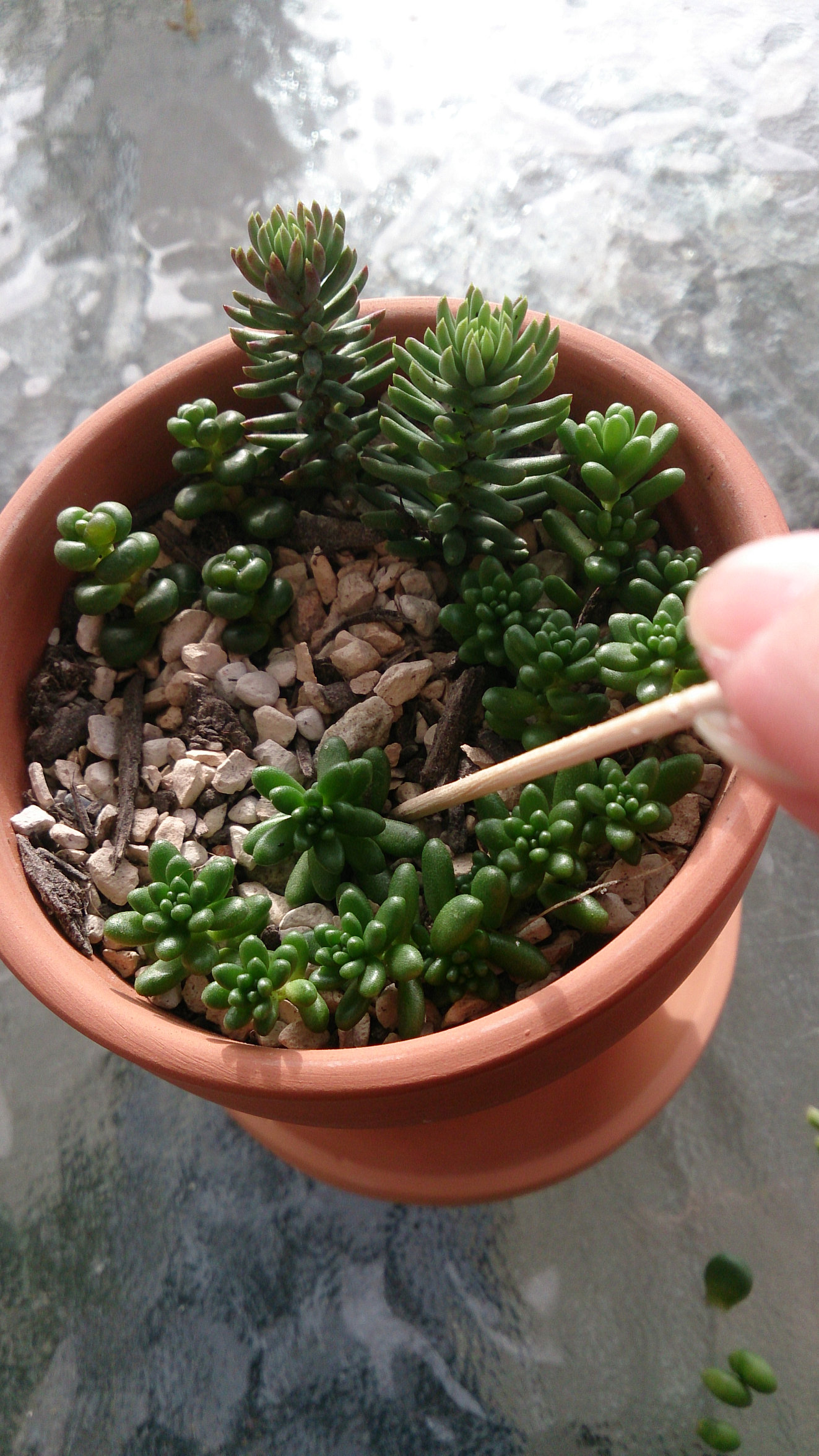 Because the cuttings are so small and need to be arranged closely together, I inserted them into the pot with a toothpick. The method is as follows:

Do not force the stem into the dirt without poking a hole. This will damage the stem.

I used a custom potting mix for succulents which is largely composed of diatomaceous earth and fine gravel. If you use a store-bought mix, the same concepts apply, but you may want to layer the top of the dirt with fine gravel before starting. Most succulent planters have a layer of gravel on top to prevent soil runoff when watering. It would be impossible to exactly replicate the arrangement I created, but I'm sure no one was thinking of such a thing anyway. Part of the fun is in arranging the planter according to your own aesthetic style! I will, however, try to explain some of my reasons for why I arranged mine the way I did.

As I inserted more of the cuttings into the pot, I realized that if I filled it up entirely with succulents it might look too "busy" or "messy". I added three little pebbles to the pot to create a more interesting visual presentation. The white colour and smooth texture contrasts with the plants, and creates something for the eye to focus on.

These were among the smallest of stones I collected at the beach, but you can buy a small bag of decorational gravel which will have similar pebbles at arts and crafts stores.

Other suggestions for items used to add a point of focus in the arrangement:

Furthermore, I chose to group the cuttings by the species of plant. This was because the flowerpot is so small, and there was not much space to work with. Arranging the cuttings "randomly" when there are such a few number of them is quite difficult. However, I'm sure there are ways to make it work.

The last point I want to make is you should try to consider what angle the planter will be viewed from when arranging. I placed the two tall spiky cuttings in the back of the arrangement. If the planter were rotated, however, these would obscure the view of the other plants. 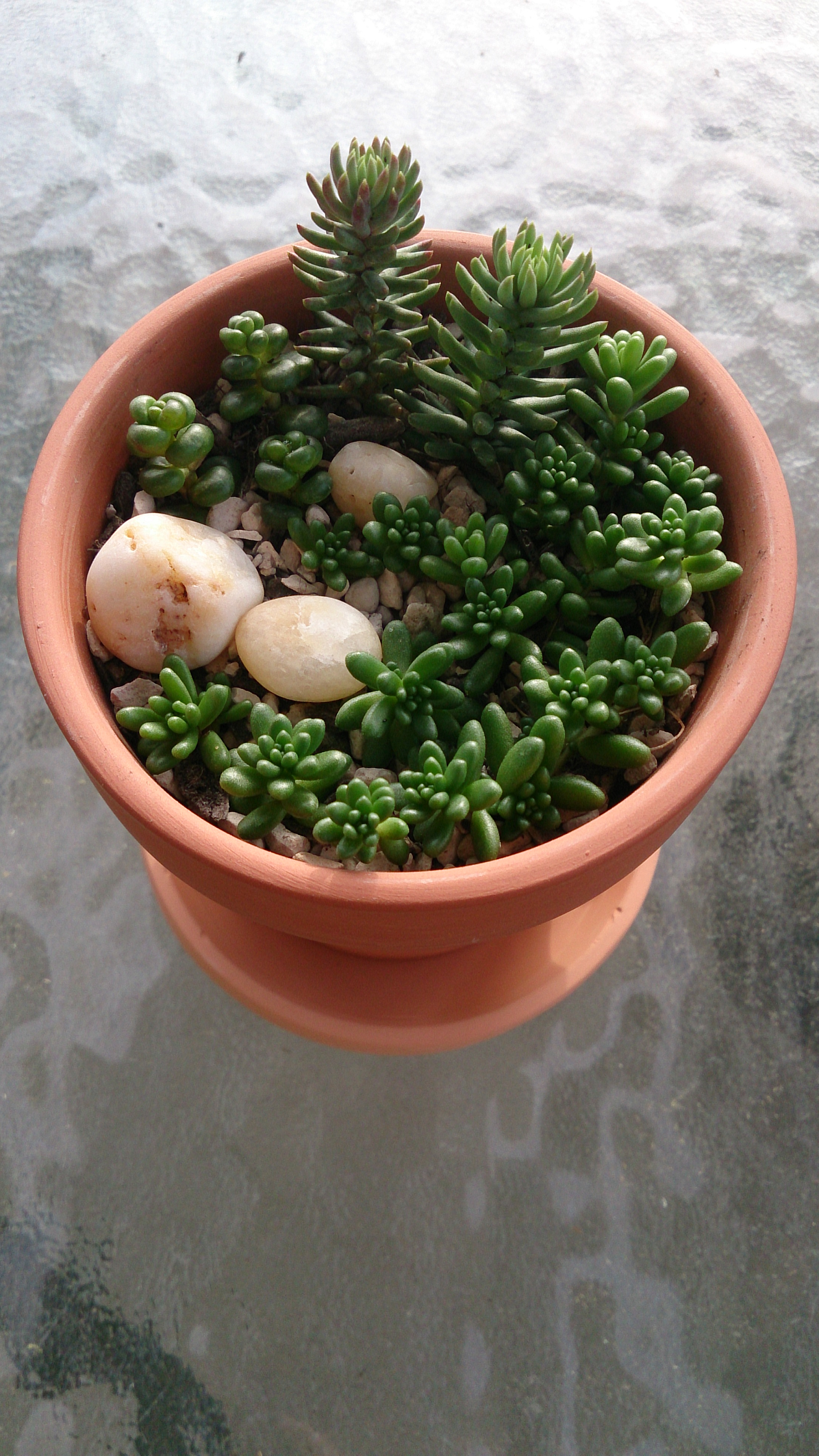 Once you are satisfied with the arrangement, leave it in a sunny spot and wait a day or two before watering. This lets the open cuts on the plants heal a little.

I could have left the planter at the previous stage and it would have looked fairly nice as well, but I chose to add a few more cuttings. I left very little visible soil in this arrangement, which gives the appearance that the little flowerpot is bursting or teeming with life. That being said, empty spaces can be used in a visually appealing way as well. It's all a matter of personal taste!

After writing this all out, I've realized that there's a lot of subtlety to arranging planters, even miniature ones! So, I hope that this guide has been helpful. Thanks for reading!

gardening nature howto tutorial diy
4년 전 by meliorish53
$3.33
13 votes
댓글 남기기 4
Authors get paid when people like you upvote their post.If you enjoyed what you read here, create your account today and start earning FREE STEEM!
STEEMKR.COM IS SPONSORED BY

This is a really cool little tutorial, i was super surprised how easy it is to make your own succulent cuttings. Love painting these guys!!

It is so cute @meliorish! 😄 It looks like a big pot but when I saw the coins and read it - it's a cute little one!