Remember my post on Snow Pea Seed Planting? Yesterday was harvest day! Yay! It doesn’t look anything like the picture on the packet the seeds came in. Whether that was false advertising or just my noob green thumbs, my microgreens turned out smaller than what was advertised. The leaves are much smaller. But they did grow like crazy, out of control really. Check out the series of shots I had taken each day. Mind you I appeared to have lost day 1 photo. Note: I reset the date because I had ended up removing the seeds the following day after sowing to plant them on top of the soil instead of being covered with soil. All thanks to @nikv's advice I was able to wash the dirt off the seeds well and grow them with minimal to no soil stuck on my microgreens. Yipee! 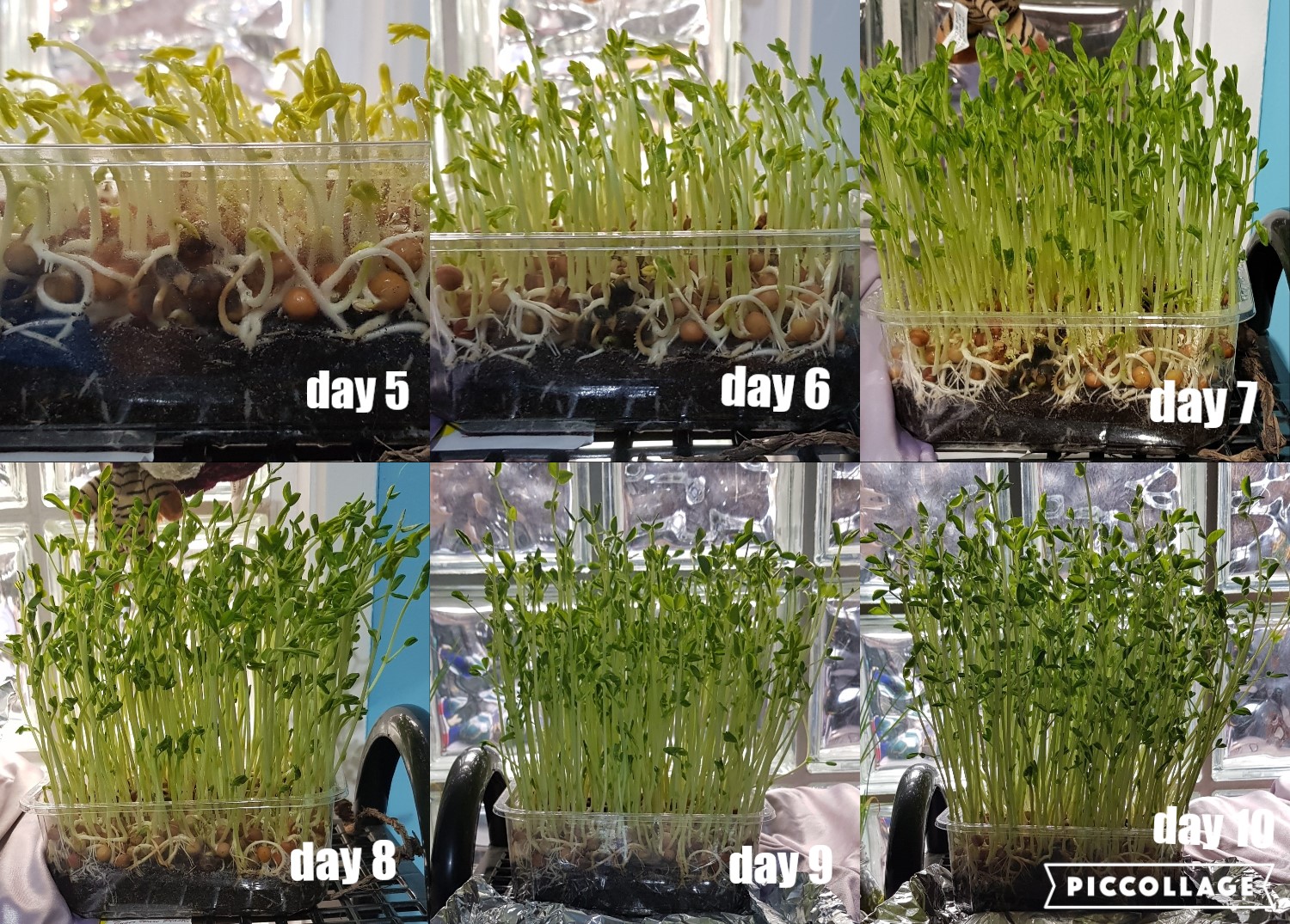 Honestly I didn’t know what I was doing. I had it covered, at the start, with foil until the shoots started to reach the top. Then I removed the foil and used it as a barrier to hold up the shoots growing to the side. I would turn the tub around so it would grow towards the other side to keep it balanced.

The barrier was also there to make sure ‘Sticky Paws Soju’ doesn’t get to it. But she was good. She understands not to touch them or the oat grass that was growing next to it. I just didn't want them dangling out and tempt Soju to reach out for a quick taste. Here are some side shots once they started to grow taller. Each day I would give them a spray and turn the tub around since they would grow towards the window. So they would grow sort of straight overall. But of course things started to get out of hand. They were growing to the point where they could no longer stand straight. So it was time to harvest and offer them to my parents to cook up and eat.

I did have a taste and found they were a little strong in flavour. But I kind of expected that considering the smell of the microgreens when I cut them. They smelt young and fresh…. Ok that didn’t sound right. But you get the idea. Anyways, I do hope I cut them at the right spot so they will continue to grow. I left about a couple inches; maybe I should have left a little more. Oh well, we’ll find out soon enough.

gardening nature life firsttime teamaustralia
2년 전 by supersoju58
$10.13
59 votes
댓글 남기기 6
Authors get paid when people like you upvote their post.If you enjoyed what you read here, create your account today and start earning FREE STEEM!
STEEMKR.COM IS SPONSORED BY

How fantastic! I think I might give it a go as well now. Looks like fun watching them grow.

hehehe it is fun to watch them grow each day; even during the day. They grow and move so quick to get the best spot towards the window

Success! You mean you weren't eating them yourself?

So long as you left a node which has a bud to form a new growth tip, you'll be ok. Those do look rather small, more like mustard than peas, although the seeds do look like peas, not mustard.

I had the idea you were going to cook the whole thing: roots, seed leaves and all. What was the verdict?

I actually had last night dinner left overs that needed to be finished and my dad had shown some interest in what I was growing. So I offered him to take the first harvest. I'll see how the second lot go, it seems to be going very slowly though. I can seem some leaves growing near the bottom. I should have really left more leaves on them.

The verdict, I didn't like the strong shoot taste that it had. I think it is because it was so young. When I see them in the store, they are more mature looking with bigger leaves. When I eat them at the restaurants it doesn't have that strong shoot taste. Maybe I needed to grow them longer and let them go even more wild before I harvest them.

I love sprouts and this is the best way of growing them.
yummy

It was really fun to grow them this way, less work too.