New Release Alert: this is the change you've been waiting for

You know—especially if you're one of my treasured P.S. readers—that I've been sweating away in the book mines working on the next book of Underrealm.

And now I finally get to show it to you.

(Don't worry. I wiped the sweat off.)

I was looking at it today, and the first Nightblade book came out on July 18th, 2014. That's Underrealm's birthday—officially.

That means Loren of the family Nelda has existed, in our world, for a little over three years now. And during that time, she's been through quite a lot.

She's escaped death more times than even I can count. She's won great victories, but she's also lost dear friends. She's been the victim of incredible betrayal. She's seen things unimaginable to most citizens of Underrealm—to say nothing of us here in the "real world."

And two people, in particular, have gone to extraordinary lengths to make her life a living hell.

Though a lot has changed, some things—some of the deepest, most fundamental things about Loren herself—have remained the same.

But the nine kingdoms are suffering a massive upheaval. One that not even the Nightblade can escape.

No one gets away from this war unaffected.

Loren's journey has been a long one. And some things have been inevitable from the beginning.

She set her feet on a path that was always going to lead to some very particular destinations.

One of those ends—though hardly THE end—is almost here.

It's in the pages of Yerrin, the sixth book of the Nightblade Epic.

And it's coming out in two weeks. 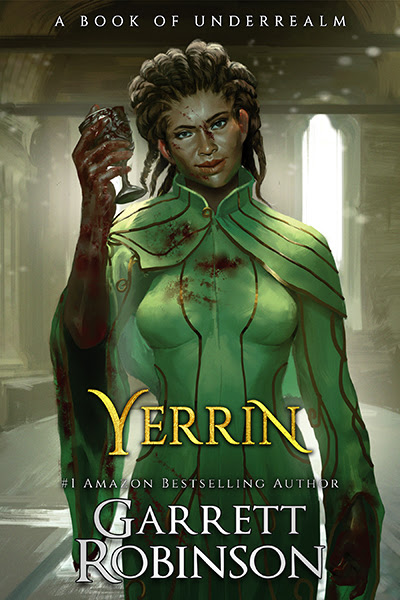 The Kindle version is available for pre-order now. The print versions (both paperback and hardcover) will be online shortly.

If you're on Team Legacy, you can expect your ARC shortly. For everyone else, the book comes out on September 29th.

Only about six people—my beta readers and my editor—have read the story so far.

When they read the ending ...

You know what? I'll tell you a little more about what they said next week. For now, I'll just say it's a doozy.

I'm incredibly proud of Yerrin. I hope you enjoy it.

And I'll talk to you again soon. (Did you enjoy knowing about this well in advance?)

Since the P.S. section is where I talk to you about the future, we can't talk about Yerrin anymore!

I'm already hard at work on the next Underrealm project.

And it's going to be coming WAY, WAY sooner than you think.

A lot of characters cross over from one series to the other. (Even more so once you read Yerrin, I promise you.)

But Loren and Ebon themselves have never actually met.

garrettrobinson underrealm nightblade yerrin legacy
4년 전 by fortinbuff64
$4.84
47 votes
댓글 남기기 1
Authors get paid when people like you upvote their post.If you enjoyed what you read here, create your account today and start earning FREE STEEM!
STEEMKR.COM IS SPONSORED BY