A Form of Communication for the Ages: Message in a Bottle

Recently, I read an article from the Smithsonian with the headline, 131-Year-Old Message in a Bottle Found on Australian Beach, and I was fairly flabbergasted by this. “A bottle out at sea for how long?” It sparked my curiosity and before I knew it, I was digging through a goldmine of information. What originally started out as minor interest, turned into me having a huge appreciation towards a form of communication that has been around for millennia. In pop culture, the message in a bottle is romanticized and used as the basis of a plot for a mystery or love story. In actuality, the message in the bottle was originally used for scientific purposes. The rich history behind it shows an evolution of a form of communication that is continuing to be put to get use until this very day. Scientifically and historically speaking, the message in a bottle has been often used as a tool to identify water currents in large bodies of water. When used in this manner, they are generally called drift objects or determinate drifters. The first recorded use of this method dates all the way back to 310 B.C. when the Greek philosopher Theophrastus was trying to prove the Mediterranean Sea was formed by the inflowing Atlantic. While there is no historical data suggesting he ever received a response from someone who found one of his bottles on a far away shore, this example does help convey how long this method has been used. 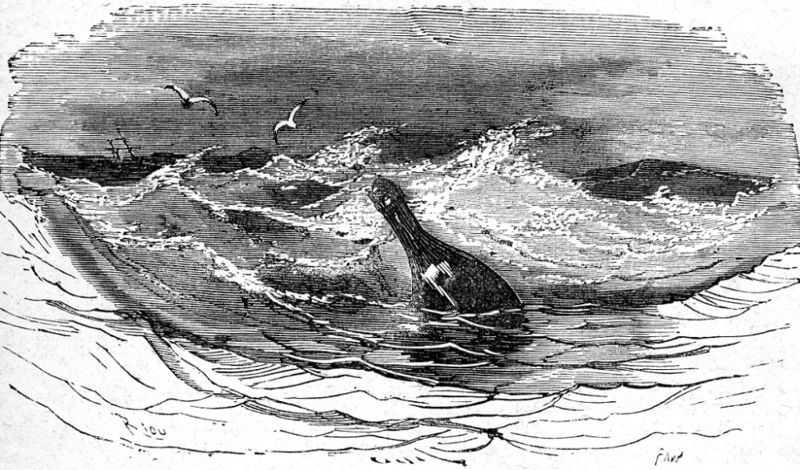 In the article I mentioned earlier, the 131-year-old bottle that was recovered in Australia was tossed from a German merchant ship named Paula on June 12, 1886, which was noted by the ship’s captain, O. Diekmann. Apparently, through much of the 18th and 19th centuries, German sailors casted a large sum of bottles into the oceans in order to track water currents. On the Paula’s voyage through the Indian Ocean, thousands of bottles were thrown overboard. Today, 662 messages have been retrieved from that very experiment. While the bottle thrown from the Paula was in fact old, it isn’t the oldest discovered. To date, the oldest bottle ever retrieved was from Chunosuke Matsuyama, who sent a message in 1784 after him and 43 of his shipmates wrecked. The message was eventually found in 1935, meaning it had been out at sea for over a 150 years!

To find a drift bottle of this kind is very rare indeed. This is largely because of the forces of nature at work that sink most bottles. The main reason most bottles sink is because the actual cap of the bottle can wear away, allowing moisture or water to enter the bottle, which destroys the message as a result. Another common issue is that marine organisms can grow on the bottles, causing them to sink. This typically occurs within a eight to ten month window, meaning that if the bottle does not wash ashore within that time frame, there is a good chance the bottle will never be recovered.

With that being said, a very low percentage of bottles (less than 3%) are actually retrieved. This is why ships such as the Paula released thousands of bottles to increase the likelihood of them being found. However, these percentages varied depending on where they were released. In a densely populated area, the percentage goes up a considerable amount (roughly 50%). On the flipside, if the bottles are released in sparsely populated regions, these percentages go down dramatically. Another impressive fact is that these bottles can travel nearly 100 miles a day and have been known to traverse 6000 miles! Other organizations such as the U.S. National Geodetic Survey (NGS) conducted similar experiments as well in the 19th and 20th centuries. Over that time, the NGS was intertwined with multiple agencies, but in 1970 it was taken under the wing of the National Oceanic and Atmospheric Administration (NOAA) and the United States Department of Commerce, where it remains today. The main goal of the NGS is to define and manage a large scale national coordinate system which lays the groundwork for mapping and charting regions to be used for transportation and communication. The system itself is called the National Spatial Reference System (NSRS), which is “a consistent coordinate system that defines latitude, longitude, height, scale, gravity and orientation throughout the United States.” As you can see, the NGS plays an integral role in America’s overall infrastructure.

Truthfully, there is almost too much information for me to digest and regurgitate how widespread this system actually is. It would appear the NGS has a plethora of ongoing programs. The next large scale release of datums will be in 2022 and it will be called the North American Terrestrial Reference Frame of 2022 (NATRF2022). It should be noted, the NGS and similar agencies no longer use actual bottles for these purposes. Today, they use biodegradable drift cards and wooden drifters. This is in large part due to an increased awareness of human effects on their surrounding environments. 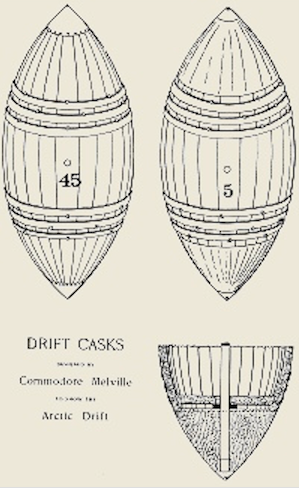 Drifting objects come in all different shapes and sizes. Some are specifically made to traverse the ocean floor, while others are filled with just enough sand to follow the currents below the waters surface and above the ocean floor. They can technically be anything that is able to float, such as a wood block or a cask, which are great to track surface currents caused by wind. Believe it or not, the idea of the message in a bottle has even taken to space! In 1977, the satellite Voyager carried a golden disk with images, sounds, music and our planets coordinates in case another alien race retrieves it outside of our solar system. Personally, I think that was a grave mistake, but maybe we'll start a revolution on a peaceful planet because they heard Chuck Berry's song, Johnny Be Good. No big deal... While the scientific use of drift objets is intriguing, the historical and cultural examples of their use are just as interesting. Whether it was to spread propaganda, finding a pen pal or a last ditch effort to communicate to a loved one before an untimely death, the message in the bottle has served the common citizen in many ways. Here are some of the more noteworthy examples: 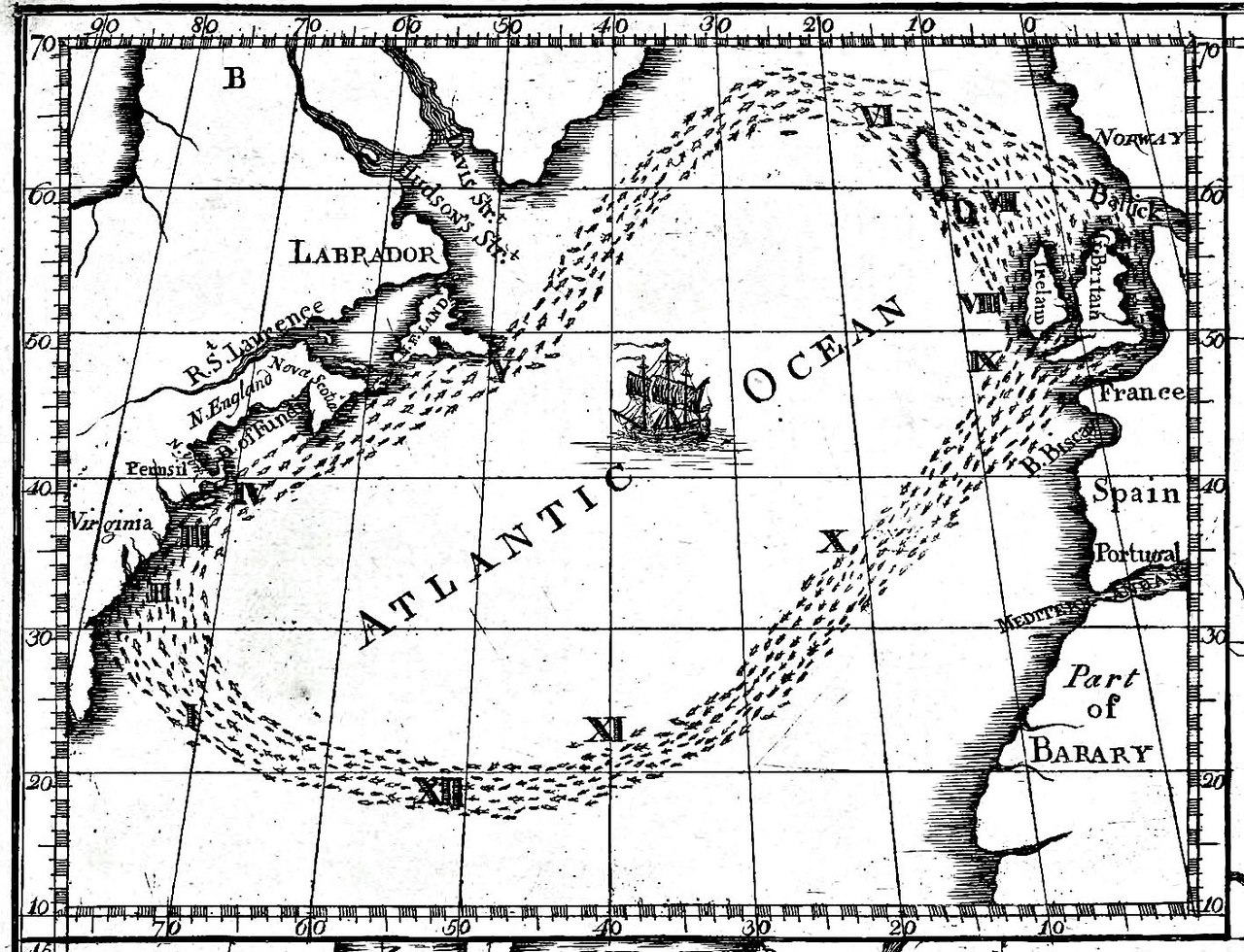 This map illustrates the experiments conducted by none other than the late great Benjamin Franklin during the late 1700's. He was attempting to map the currents of the Atlantic. Image Source

As you can see, the message in the bottle has been used for all sorts of creative purposes. Before I read anything about the rich history behind this form of communication, I only saw it as a novelty act— very similar to tossing a coin in a water fountain. I was delighted to find out that human ingenuity put this rather archaic form of communication to good use. There is truly a ton of information that I could write about regarding drift objects, but that would make this post entirely too long winded. For the most part, I just wanted to share with you how impressed I was by the cultural geographical impact that something so innocent could have. In a future post, I may dive deeper into the scientific side of drift objects, but for now I’ll just launch this post off my computer and let it cruise the figurative ocean currents of Steemit.

If you enjoyed reading this post, be sure to give me a follow and check out the rest of my blog. Overall, my blog consists of scientific topics dealing with geology, meteorology, geography, food and history. It's also peppered with a bit of photography and journal entries. The goal of this blog isn’t to earn money per se. While that is a nice benefit, I’m more interested in networking, learning, informing and helping the Steemit community grow to new heights. Also, be sure to use the steemstem tag and join @Geopolis if you're a fellow geologist! Thanks for all your support!

geology steemstem steemiteducation history science
2년 전 by keephy56
$5.55
139 votes
댓글 남기기 12
Authors get paid when people like you upvote their post.If you enjoyed what you read here, create your account today and start earning FREE STEEM!
STEEMKR.COM IS SPONSORED BY

I really had no idea about any of this and I'm actually pretty sure that before I read it I would've even said that messages in bottles were more myth than fact.

I particularly liked the historic examples and especially liked how you drew a comparison between maritime messages and Voyager.

Hey @keephy I wonder how many bottles end up here !? Also 100 miles per day, that's an impressive number, that's about 4 knots.

If you don't mind me asking— what exactly did you find helpful?

many lessons are taken from the story of the bottle @keephy

I really enjoyed while reading your post.. I heard only one story about found bottle which was written by a soldier in the 1 World War. I didn't know that the bottles are thrown into the oceans for scientific reasons. But as I saw it was not successful because most of the bottles sank.. It means there are thousands of bottles on the ground of world oceans ;) Anyway the other stories you mentioned with bottles are very fantastic.. Especially the one with Swedish sailor and Sicilian girls' love story.. Congratulations @keephy! You have completed some achievement on Steemit and have been rewarded with new badge(s) :

Hello keephy, welcome to Partiko, an amazing community for crypto lovers! Here, you will find cool people to connect with, and interesting articles to read!