Geology of the Oldest Mountains in the World: Vol. 2 - Denudation of the Southern Appalachians

Now that I’ve had the opportunity to live in different regions of the Appalachian Mountains, I’m able to discern changes in the topography in any given region of the mountain chain. For instance, in southwestern Virginia the valleys are wide and the mountains are on average much lower in altitude. On the other hand, in western North Carolina the valleys are narrow and the mountains are taller on average. This led me down the path of trying to figure out why the two regions are topographically different from one another. Today I will be discussing what causes these differences in the landscape of these regions. 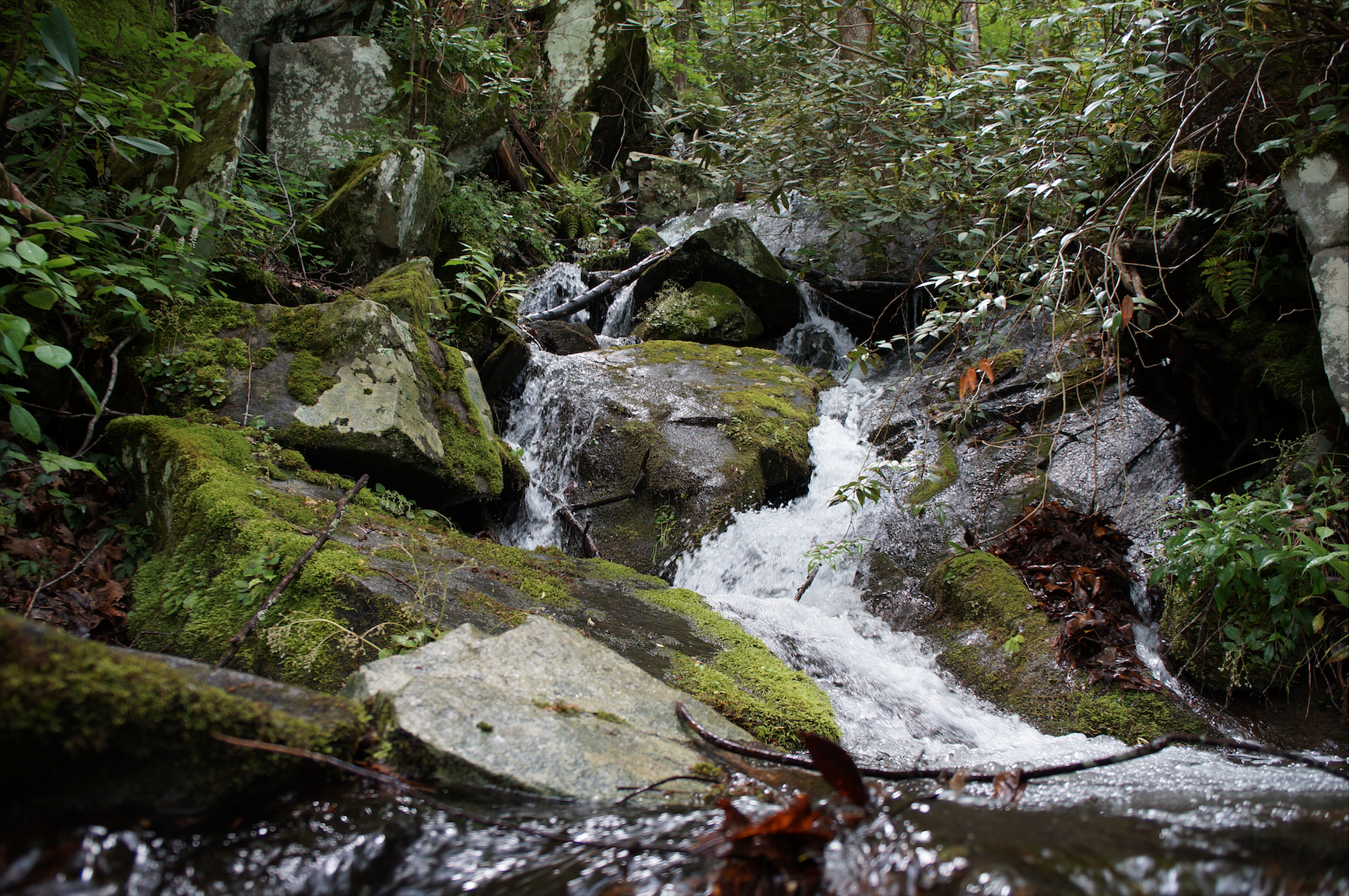 Image Source: This photograph was captured by the author of this article @keephy.

Before we begin, it’s important to understand the causes of denudation. Denudation is what shapes the topographical landforms that exist on our planet by means of moving water, ice, wind and waves. This causes a reduction in elevation and relief of landscapes and landforms. It all begins with the endogenous processes that occur from plate tectonics— e.g. uplifted crust, volcanoes, earthquakes— which causes continental crust to be exposed to the exogenous processes of weather, erosion and mass wasting. Some great examples of denudation are sandstorms caused by wind, valleys carved by rivers and coastal cliffs cut by waves. Nevertheless, today we’ll be focusing primarily on denudation in the southern Appalachian Mountains caused by precipitation, streams and rivers.

Unlike the Rocky Mountains in the western portion of the United States, the Appalachians peaks are rounder, greener and are on average much lower in altitude. The primary reason for this is due to roughly 400 million years of atmospheric denudation. Eventually the Rocky’s may take on a similar appearance, but we certainly won’t be around to see it. As a matter of fact, they’re still growing!

The two regions in the Appalachians I’d like to focus on in this post are the Allegheny Mountains of southwestern Virginia and the Smoky Mountains in western North Carolina. While both sets of mountains are part of the greater Appalachian Mountain chain, they have distinct appearances that set them apart from one another. As I mentioned in an earlier post, the Appalachians were uplifted multiple times in their 480 million year history. The most recent uplift occurred during the Cenozoic Era (66 Ma), which gives us the mountains we see today. 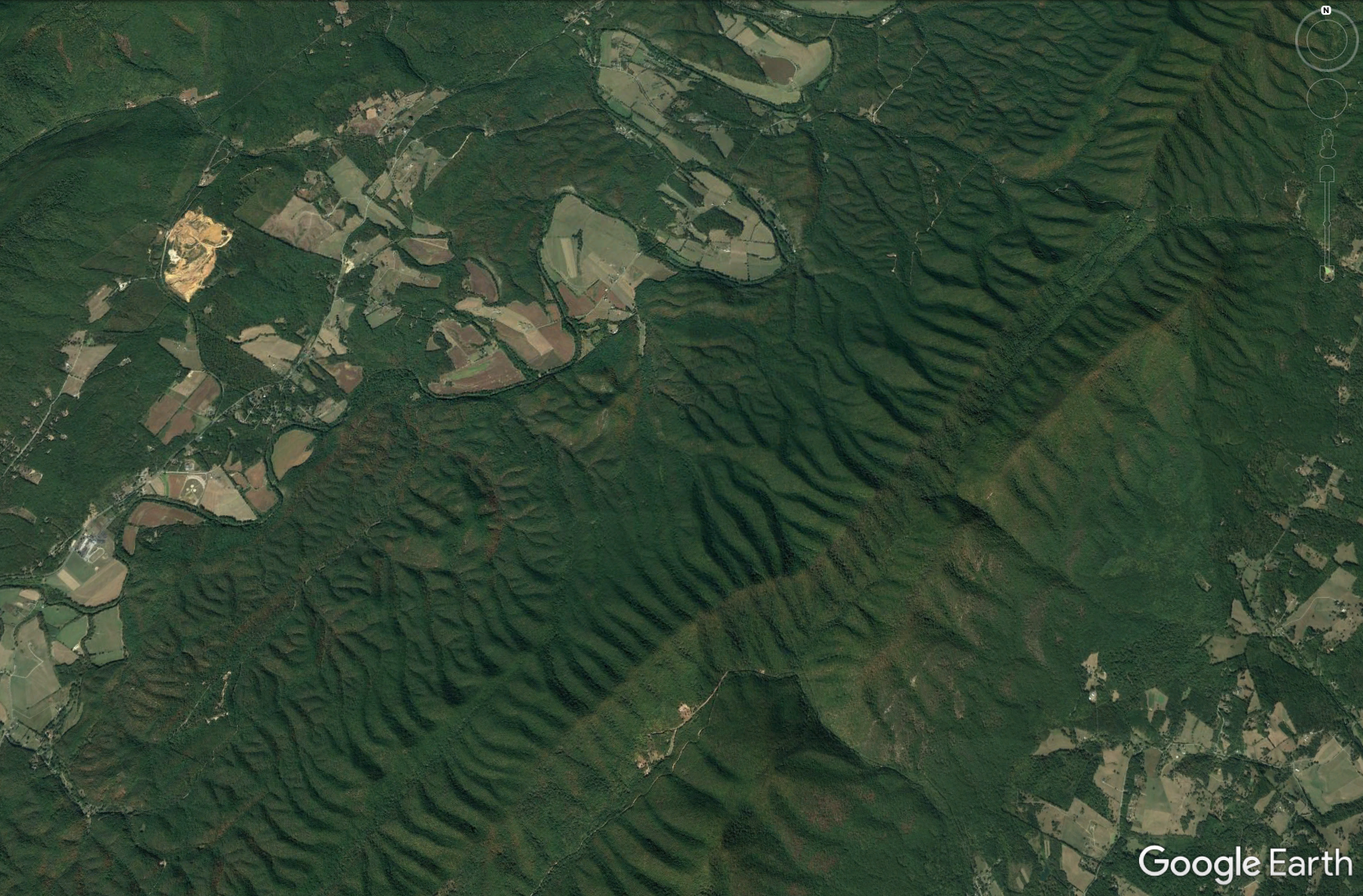 Satellite imagery of a small section of the Allegheny Mountains in southwestern Virginia from an altitude of 70 miles. Note the streaks of erosion from the ridge line. [Image Source]

If you look at the satellite imagery I provided above, you will notice how the Allegheny Mountains have broad valleys and elongated mountain ranges. The reason for this appearance can be attributed to the folding and faulting of the bedrock that occurred during the Allegheny orogeny (also known as the Appalachian orgeny) 480 Ma. Over the course of 400 million years (Mesozoic Era) these mountains would be eroded to a plateau. However, during the last uplift which occured in the Cenozoic Era (66 Ma), many of the streams in this region were rejuvenated, giving them the energy necessary to cut through the bedrock.

Much of the bedrock in this region is actually ancient sea floor, consisting of shale, siltstone, sandstone, limestone and dolomite from the Devonian to Cambrian periods— most of which are highly susceptible to erosion. However, the peaks in this region are abundant in metamorphosed sandstone (quartzite) which is extremely resistant to weathering. As a result, the runoff from the watershed boundaries (ridge lines) carved out these enormous valleys, while the peaks remained intact for much longer, giving us the elongated ridges and valleys we see today. It should also be noted that some of the valleys in this region were in all likelihood ancient fault lines as well, which rivers are known to follow as they begin to denudate a region. Essentially, all of these valleys are technically massive tectonic windows. Now, the Smoky Mountains made me pause for a moment. From what I learned about the Allegheny Mountains, it would seem fair to conclude that the same level of denudation should have occurred in the Smoky’s as well. However, looking at the satellite imagery above, you can see that they look nothing like their sister mountains to the northeast in Virginia, but evidently were uplifted during the Cenozoic Era as well. As it turns out, the bedrock of this region is almost entirely different than that of the Allegheny Mountains and is known as the Ocoee Supergroup.

Much of the bedrock in the Smoky Mountains consists of metamorphosed sandstone (quartzite), siltstone and conglomerate. The watershed that is being viewed in the image above is known as the Fontana watershed, which produces the Little Tennessee River as a result. One would assume that the Allegheny Mountains receive a larger amount of precipitation, but quite the opposite is true. This region is technically a temperate rainforest; very similar to the climate one would experience in Puget Sound of the Pacific Northwest. However, due to the weather resistance of the bedrock of this region, the mountains experienced far less denudation over millions of years. It should be noted that these mountains exist in a larger collective of mountains known as the Crystalline Appalachians (Blue Ridge, Piedmont, Adirondack and New England Provinces) because they consist of Precambrian and Cambrian igneous and metamorphic rocks— all of which are extremely resistant to weathering. Generally speaking, this sliver of bedrock consists of the tallest peaks throughout the Appalachians due to their erosion resistant qualities. 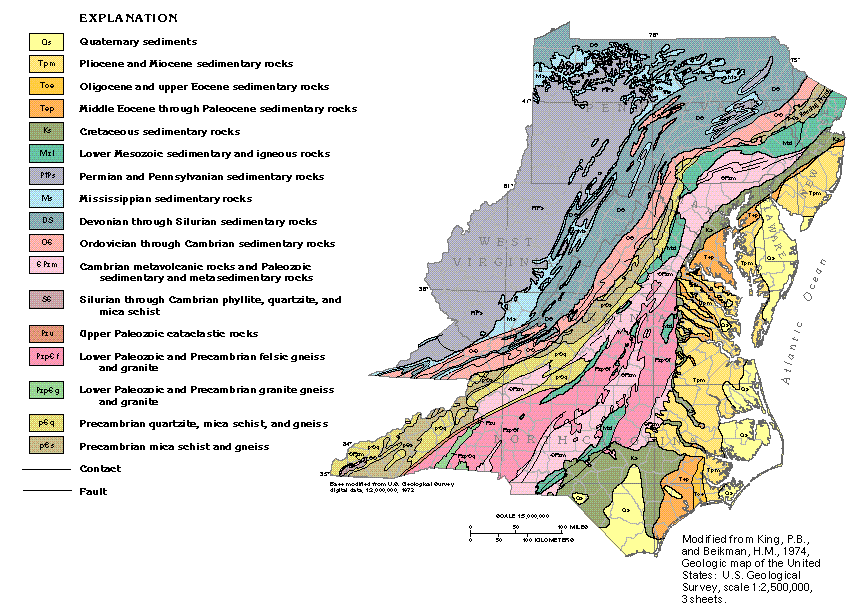 This image display the various bedrock through the Appalachian Range. Take note of the bedrock in western North Carolina and southwestern Virginia. [Image Source]

The image above should help you better understand and visualize what is occurring throughout the Appalachian Mountain chain. For the inexperienced eye, it is difficult to observe these differences but what really helped me along the way was specifically paying attention to the watersheds of these regions; especially the watershed boundaries along the ridge lines. While the Allegheny Mountains have a sequential amount of smaller tributary streams coming from its ridge lines, the Smoky Mountains have a variety of both smaller and larger tributary streams eroding the mountainsides that are very rambunctious. The denudation occurring in these regions are caused by the runoff from annual precipitation, streams and rivers. This diagram will help you better understand the process that occurs in a watershed. Please use this diagram as a reference for the satellite imagery I provided above with what you learned in this article today. [Image Source]

At first, the significant topographical differences in these landscapes completely confused me and led me to believe that these sets of mountains (Allegheny and Smoky Mountains) were uplifted at different geological periods. As it turns out, they were both raised during the same tectonic event, but eroded at different rates due the specific bedrocks unique to those regions. It should be noted that the Appalachian Mountains are still a bit mysterious geologically speaking. Nevertheless, I believe with advancements in research and technology we will continue to unearth more about this modest, yet very dynamic mountain range.

geology steemstem science steemiteducation photofeed
2년 전 by keephy56
$33.03
102 votes
댓글 남기기 2
Authors get paid when people like you upvote their post.If you enjoyed what you read here, create your account today and start earning FREE STEEM!
STEEMKR.COM IS SPONSORED BY

ADVERTISEMENT
Sort Order:  trending
[-]
geopolis54  ·  2년 전
Your post has been personally reviewed and was considered to be a well written article.
You received a 80.0% upvote since you are a member of geopolis and wrote in the category of "geology".
To read more about us and what we do, click here.
https://steemit.com/geopolis/@geopolis/geopolis-the-community-for-global-sciences-update-4
If you do not want us to upvote and comment on your posts concerning earth and earth sciences, please reply stop to this comment and we will no longer bother you with our love ❤️
$0.45
1 vote
댓글 남기기
[-]
steemstem-bot57  ·  2년 전