Primitive Mantle Pockets: How Isotopes Help Geologists Peer Into the Center of the Earth

In this post, I'll be discussing how—through the study of isotopes in igneous rock below Réunion Island— modern volcanism can be correlated to geological events that occurred during the Earth's formation 4.5 billion years ago. The island of Réunion is technically a hotspot, whose eruption 66 Ma created the flood basalts of the Deccan Traps found in India.

It was roughly 4.5 billion years ago when heat produced by Earth’s formation process began to melt extensive portions of the planet. When this occurred, Earth began to separate into two layers due to a differential of density between materials. The heaviest layer that began to sink was iron metal, which consequently created the core. As this occurred, less dense silicate-rich elements began to float above the core, creating the mantle. This process is known as mantle convection. 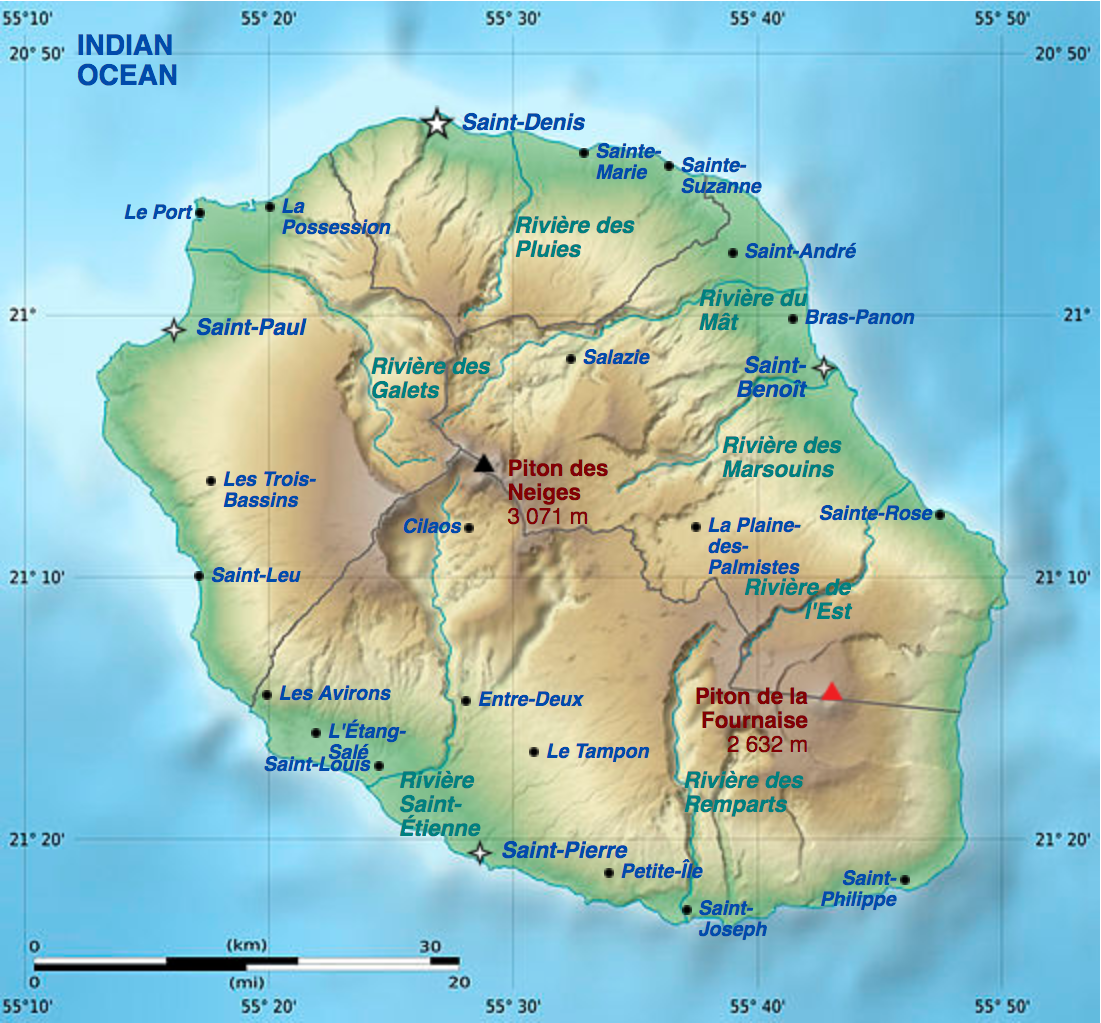 Over the course of Earth’s evolution, this process has allowed large portions of the mantle to move upwards towards the surface, partially melting the upper mantle causing incompatible elements to separate once again. This created the Earth’s crust at divergent plate boundaries (mid-ocean ridges) and further changed the mantles composition as a result. At convergent plate boundaries (subduction zones), the crust and it’s distinct chemistry is reintroduced back into the mantle, where it’s eventually mixed into the Earth’s interior once again, which is part of the greater rock cycle mechanism. However, it would appear this process doesn’t thoroughly blend these elements back together— think cookie batter that has pockets of flour that haven’t been fully incorporated into the mixture. It's presumed primitive patches of mantle created in the first 10% (500 million years) of the Earth’s history may remain relatively intact. As a result, these isolate pockets have a distinct geochemistry from the rest of the mantle, which has been subjected to interior convection.

Through studying new isotopic data, scientists are able to analyze chemical compositions of volcanic rock to determine whether the origin of the magma is from primitive mantle pockets or the thoroughly mixed modern mantle. A isotope is an element that has an identical number of protons and a dissimilar amount of neutrons. Occasionally, an isotope can become unstable due to the number of neutrons in its nucleus. In order to gain stability, the process of radioactive decay occurs in order for the isotope to release energetic particles. This process modifies the number of protons and neutrons in the isotope and as a result, transfigures it into a different element. 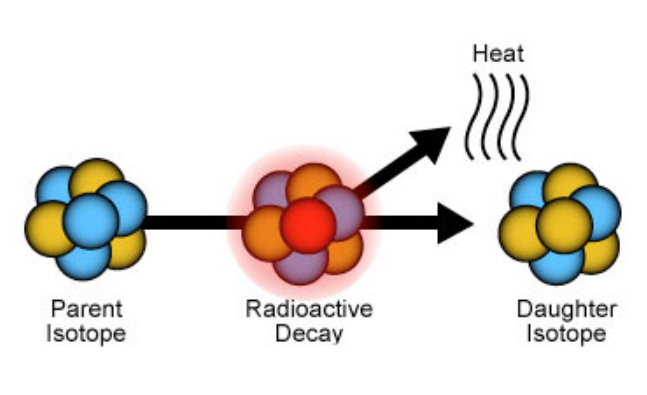 For example, the chemical element francium (no. 87, Fr) is the most unstable of all elements— whose most stable isotope (francium-223) has a 22 minute half-life. The isotopes of francium will eventually decay into astatine, radon and radium. It’s also the second rarest naturally occurring element on Earth and is highly radioactive.

Today, a group of scientists from the Scripps Institution of Oceanography use this new study of isotopic data as a figurative fingerprint to map the age and history of the preserved mantle pockets. Currently, they’re studying the flood basalts and other lavas produced by the Réunion Hotspot (located 580 miles east of Madagascar in the Indian ocean) to further understand the evolution of our planet. Unlike other volcanoes on the Earth’s surface (whose magma derives from the flux melting of ultramafic rock between two converging plates), the magma near hotspots are thought to originate from the primitive mantle pockets located deep within the lower mantle. This image displays the active shield volcano Piton de la Fournaise which formed as a result of the Réunion hotspot. [Image Source: Wikipedia]

It is believed by these scientists that the plumes of magma from the hotspot that formed Réunion Island contain key isotopes (neodymium-142 & 144) that will help them better understand the odd seismic signatures from ultra-low velocity zones (ULVZ’s) and large low shear velocity provinces (LLSVP’s). These are dense regions located near the boundary where the core and mantle meet (outer core, lower mantle), which reflect slow moving seismic waves as they pass through them. Their study of the differing ratio of neodymium-142 and neodymium-144 found in the volcanic rocks of Réunion Island could help solidify the theory that these interior regions are in fact the primitive mantle pockets which the magma plumes below Réunion Island derived from.

In order to better understand how these scientists conclude the origins of the magma, we have to take a closer look into the isotopes themselves. As I mentioned earlier, some isotopes are unstable– one such radioactive isotope is called Samarium-146, which has a half-life of just 103 million years. As this isotope decays, it becomes neodymium-142. It should be noted that Samarium-146 was abundant when the solar system and Earth initially formed; however, it became extinct fairly early in the beginning of the Earth’s formation due to its short half-life. As a result, the neodymium-142 (in comparison to other neodymium isotopes) found in the lavas around the Réunion hotspot, provide a solid idea of the chemical composition of the Earth’s mantle in the first 500 million years of its formation.

If you enjoyed reading this post, be sure to give me a follow and check out the rest of my blog. Overall, my blog consists of scientific topics dealing with geology, meteorology, geography, food and history. The goal of this blog isn’t to earn money per se. While that is a nice benefit, I’m more interested in networking, learning, informing and helping the Steemit community grow to new heights. Also, be sure to use the steemstem tag and join @Geopolis if you're a fellow geologist! Thanks for all your support!

geology chemistry steemstem steemiteducation science
2년 전 by keephy56
$34.85
125 votes
댓글 남기기 5
Authors get paid when people like you upvote their post.If you enjoyed what you read here, create your account today and start earning FREE STEEM!
STEEMKR.COM IS SPONSORED BY

Being A SteemStem Member
$0.69
1 vote
댓글 남기기
[-]
geopolis54  ·  2년 전
Your post has been personally reviewed and was considered to be a well written article.
You received a 80.0% upvote since you are a member of geopolis and wrote in the category of "geology".
To read more about us and what we do, click here.
https://steemit.com/geopolis/@geopolis/geopolis-the-community-for-global-sciences-update-4

Would love to see a post about those mantle diamonds with Ice VII inclusions, assuming you can add more than the general science journalism articles I've been reading, e.g. on ScienceAlert.com. Very curious stuff!

Fantastic research @keephy.
It's amazing how science is able to come to incredible findings nowadays.
I like the 103M years short half-time. ;-)
Re-steeming.

Hey there! Thank you for the re-steem and upvote. I figured someone would laugh at the short half-time statement, lol. In geological terms, it is rather short. Anyway, I'm glad you enjoyed the article. I write about geological topics such as this fairly often so stick around if you'd like. :)