Out of all the regions I’ve lived in the United States, the San Francisco Bay Area in California is by far my favorite. The rich and complex culture of the bay would appear to be a direct reflection of its dynamic topography. It was in this region that I experienced my first earthquake. As a result, I became infatuated with the geological processes taking place there. While I was always aware of the San Andreas transform boundary, I was surprised to find out the Bay Area is riddled with faults. While most people presume it is the San Andreas Fault that is the most hazardous of this region, there is another fault that poses just as much of a threat. 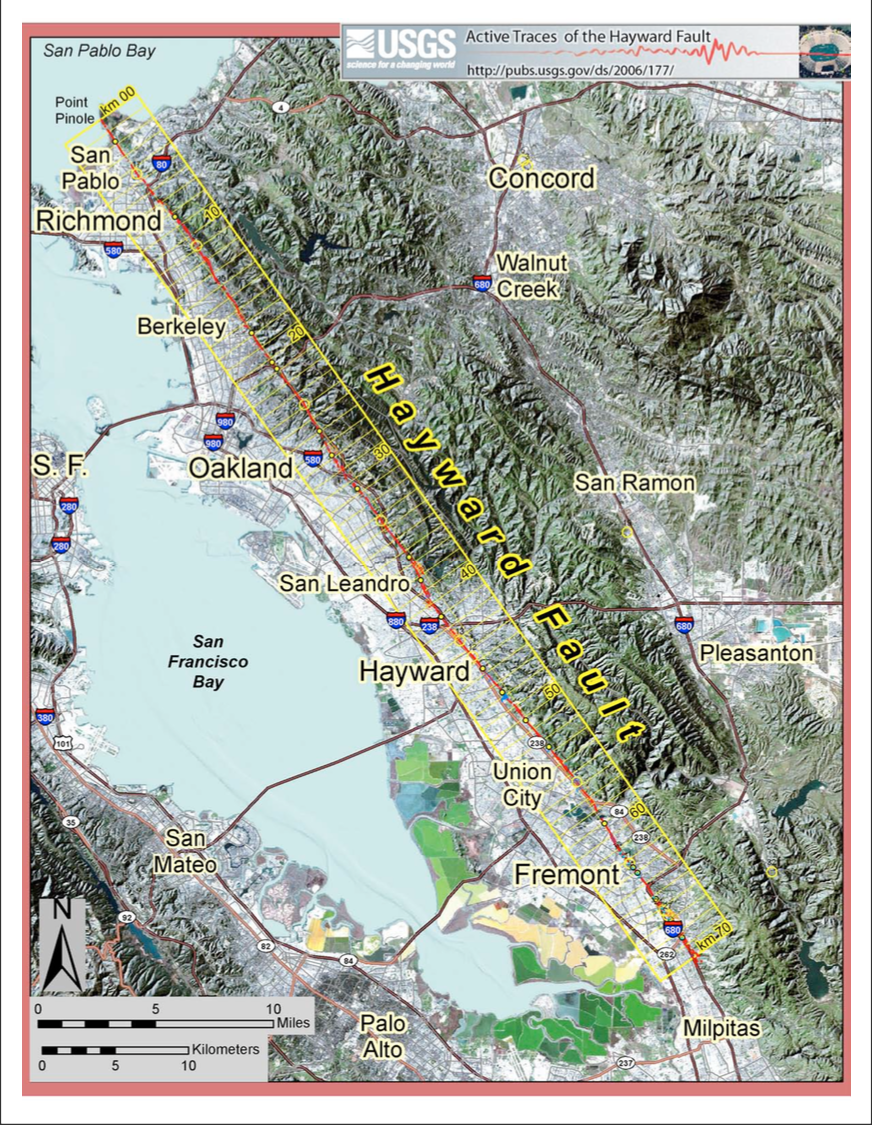 This map display the path of the Hayward Fault in the East Bay of the San Francisco Bay. [Image Source]

Residing in the East Bay underneath Oakland and all of its suburbs, is the Hayward Fault Zone (right lateral strike-slip). In comparison to the San Andreas, the Hayward Fault is much smaller in size, stretching over 118 miles (190 km)— this distance includes its tributary fault the Rodgers Creek Fault near San Jose, CA. However, due to the compressional forces taking place between the Pacific and North American plates, the Hayward Fault Zone is capable of producing earthquakes with a magnitude of 7.0 or higher. To say the least, this poses a genuine threat to the populations inhabiting this area.

Built directly above this fault are dense urban populations, elevated highways, stadiums, tunnels and subways. The actual fault creep of the Hayward can be viewed throughout the sprawling urban area, but the best example could be seen at Memorial Stadium on UC Berkeley campus. When the stadium was originally built in 1923, much less was known about plate tectonics. By chance, this stadium was built directly on top of the fault lengthwise. Pictured below, you can see the crack in the stadium that offset the north and south end walls by 13 inches (33 cm), which was caused by the slow moving fault creep. As of 2012, this stadium was given extensive upgrades to deal with this problem. It involved separating the stadium into 4 sections and retrofitting many of the support columns as well. As of right now, the last major earthquake the Hayward fault produced was in 1868, when this region was far less populated. Through the study of trench exposures and radiocarbon dating, it has been concluded earthquakes occur on 140 year intervals. This means that the Hayward is past due for another major event. Since 1868, the Bay Area has dealt with other major earthquakes, most notably the Earthquake of 1906 and the Loma Prieta Earthquake in 1989. While the Loma Prieta was a significant quake, it’s epicenter was in the Santa Cruz Mountains, which lies 70 miles south of San Francisco. It should be noted, most of the foundations in the East Bay were built shortly after the Earthquake of 1906, prior to our current knowledge of plate tectonics. Furthermore, much of the East Bay lies on soils that are highly susceptible to liquefaction.

What is soil liquefaction?

Soil liquefaction is considered to be a phenomenon, whereby saturated or partially saturated soil loses strength and stiffness in the event of shaking caused by a major earthquake. Essentially, the soil begins to act more like a liquid than a solid. As a result, without proper reinforcements, many structures built in areas susceptible to liquefaction are more prone to being damaged or completely destroyed. When the soil is “liquified” it allows the less buoyant water from below to rise to the surface, creating a sort of quicksand. This is what weakens many structures foundations causing them to sink or fail entirely. The threat of liquefaction especially applies in the East Bay, where much of the urban infrastructure is built on top of the piedmont of the Berkeley Hills or landfill near the waterfront. 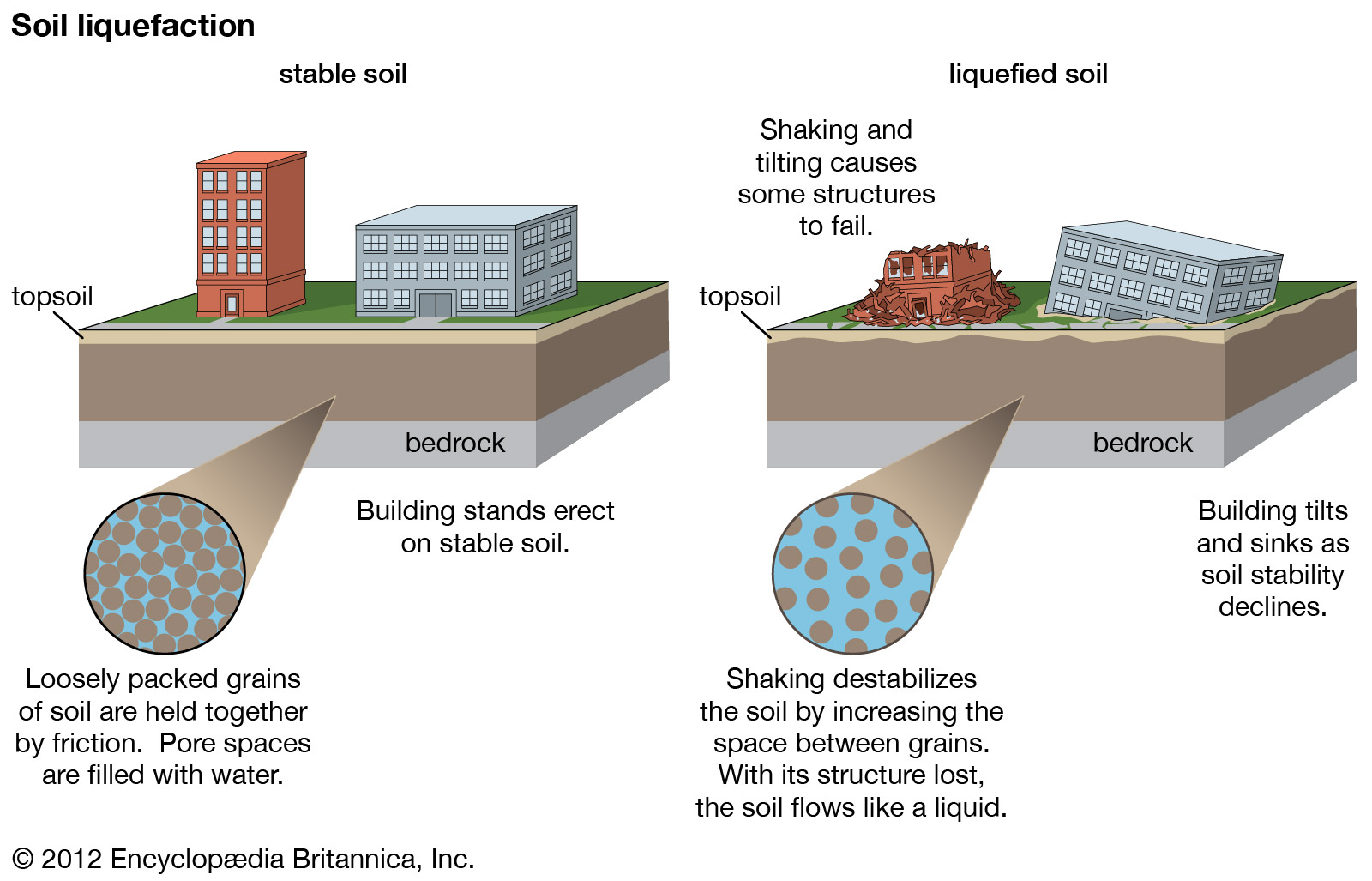 While living there, many of the individuals I worked with had anecdotes of the Loma Prieta quake in 1989. Resting on the eastern shores of the San Francisco Bay is the island of Alameda. Much of Alameda is technically a marsh, meaning it is highly susceptible to liquefaction. During the Loma Prieta earthquake, one of my coworkers described a scene that is almost difficult to believe. He said that during the quake, the roads appeared to be moving like rolling waves! He didn’t mention witnessing any water rising to the surface, but this was likely due to the epicenter being quite a distance away. Point being, when a major earthquake eventually occurs on the Hayward Fault, much of the infrastructure in this region will be damaged.

To make matters worse, it would appear the the coastal range due east of Oakland, called the Berkeley Hills, is highly susceptible to liquefaction as well. It has been concluded that massive landslides have occured in the past here and will most likely occur in the future; specifically in the event of a major quake. Much of the Berkeley Hills is populated with homes. On top of that, tunnels for highways and subways were drilled through this mountain range as well. 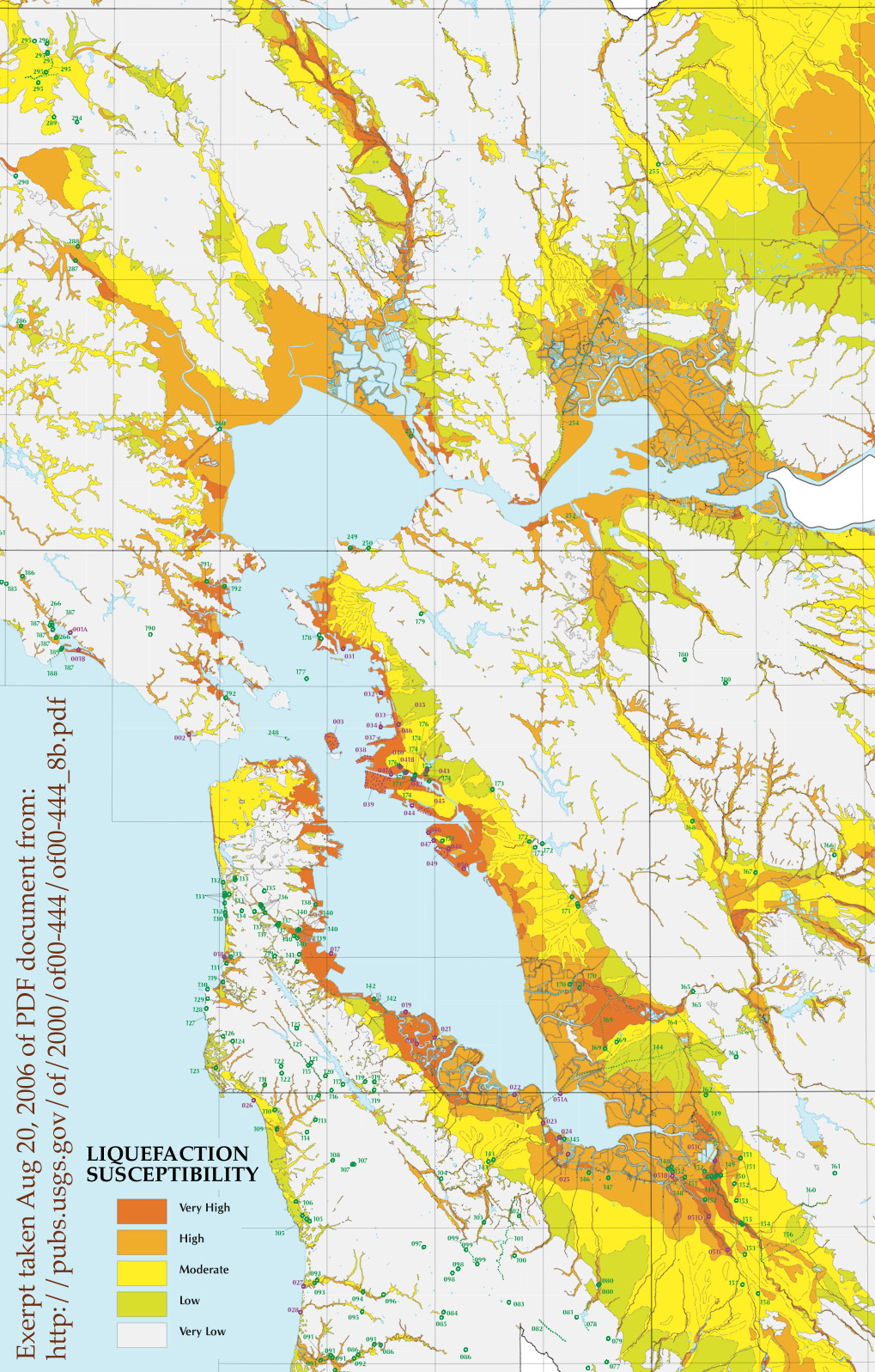 This map shows the areas that are susceptible to liquefaction. [Image Source]

One thing I’ve always found fascinating about the people living in California, is that they generally do not like talking about earthquakes. To me, this is completely arbitrary considering the risks involved, but I suppose thinking about the next “big one” would make anyone anxious. However, as a result, many of the people residing there are apathetic to many of the effects I wrote about earlier. We see examples of this everywhere in the world that are prone to natural disasters, such as hurricanes, tornadoes, floods, volcanic eruptions, etc. Truth be told, I have a difficult time ascertaining whether this shows the ignorance or resilience of humans. To try and fight the natural forces Earth challenges us with would appear to be futile, but places like the San Francisco Bay Area certainly make you view human ingenuity and perseverance a bit differently.

If you enjoyed reading this post, be sure to give me a follow and check out the rest of my blog. Overall, my blog consists of scientific topics dealing with geology, meteorology, food and history. The goal of this blog isn’t to earn money per se. While that is a nice benefit, I’m more interested in networking, learning, informing and helping the Steemit community grow to new heights. Thanks for all your support!

geology steemstem sciencepic science steemiteducation
2년 전 by keephy56
$92.78
140 votes
댓글 남기기 10
Authors get paid when people like you upvote their post.If you enjoyed what you read here, create your account today and start earning FREE STEEM!
STEEMKR.COM IS SPONSORED BY

Being A SteemStem Member
$0.96
1 vote
댓글 남기기
[-]
geopolis54  ·  2년 전
Your post has been personally reviewed and was considered to be a well written article about geology!
You received a 80.0% upvote since you are a member of geopolis.
To read more about us and what we do, click here.
https://steemit.com/geopolis/@geopolis/geopolis-the-community-for-global-sciences-update-3
If you do not want us to upvote and comment on your posts concerning earth and earth sciences, please reply stop to this comment and we will no longer bother you with our love ❤️
$0.23
2 votes
댓글 남기기
[-]
rafagonzalez53  ·  2년 전

I grew up in Sonoma County, a little north of San Francisco. I've felt some pretty bad ones living in California my whole life. There was one in Napa county a couple years ago that was pretty bad. I was 13 when the Loma Prietta quake happened in 1989. We were about 60 miles north of San Francisco but the streets were still rippling like the ocean. Pretty intense to say the least. I was reading a recent article that says the subduction zone off the coast is even more dangerous than the San Andreas Fault. Expecting a magnitude 9 or greater when it shifts. Scary

The Napa quake was the one I felt. I was in Walnut Creek/Pleasant Hill area at the time. It was late at night and I was laying in bed awake, but I jumped out of the bed in an instant. My windows were slamming and closing and it felt like I was on a boat. I grew up on the west coast of Florida so I knew the feeling. Scared the living daylights out of me, but talk about an adrenaline rush. After that, I felt a few small 3.0 – 4.0's, which were interesting, but nothing like the Napa one. To think that was only a 6.1... The subduction zone you mentioned is called the Cascadia Subduction Zone and it's definitely potent. I wrote an article pertaining to it here.

I was asleep when it happened. By the time I woke up I was already up and running for the door. I couldn't even fathom what a 9.0 earthquake would feel like. That 6.1 felt pretty huge and I was still in a different county. Stay safe down there, I'll be following to see your new blogs.

Nice article scholarly and informative. I live in Berkeley right near the Hayward.

I love faults, they present the coolest features

I hadn't heard about liquefication before. That car in the photo! Being swallowed up by the earth ... now that's a nightmare!