The Great Alaskan Earthquake of 1964: A Groundbreaking Geological Discovery of the 20th Century 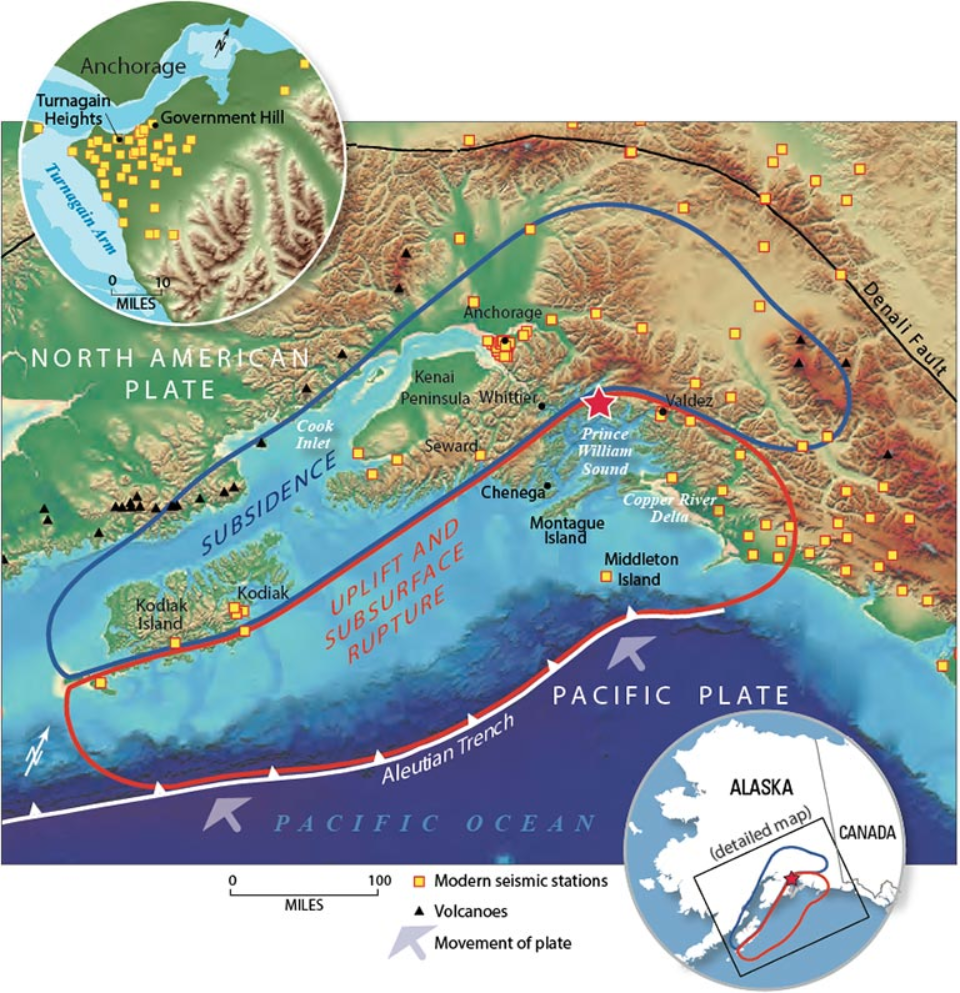 It was roughly 60 years ago when the theory of plate tectonics was validated by the geoscientific community. When you consider how short of period that truly is, versus how far the science of geology has come, it’s truly astonishing. Naturally and unfortunately, the knowledge we’ve acquired regarding the geological processes occurring below us, largely derived from the geological events—earthquakes, tsunami, landslides, volcanoes, etc.—that have occurred around us throughout history. Around the same time plate tectonics was accepted as common knowledge (late 1950’s early 1960’s), a geological event would occur that would have the geoscientific community put this theory to the test. This event is known today as “The Great Alaska Earthquake of 1964,” and the knowledge acquired from this quake was as monumental as the vast area affected by it. This image shows the destruction that occurred in Anchorage, AK due the Great Alaskan Earthquake. In this picture, the damage was caused by liquefaction. [Image Source: USGS/Public Domain]

On March 27th, 1964, Alaska was shaken by the strongest recorded earthquake in United States history. Measuring a whopping 9.2 on the richter scale, it would shake the region for over 4 minutes, killing 143 people and causing $2.3 billion in property damages. Most of this damage was caused by landslides, gaping fractures and land subsidence. The epicenter was located in Prince William Sound, only 74 miles southeast of Anchorage, practically leveling the entire city infrastructure (water, gas, sewer, telephone and electrical systems) as a result. What’s even more impressive, seismic seiches from this massive quake were reported as far away as Australia, Hawaii and the Gulf of Mexico. To put it simply, this was a big effing earthquake.

Initially, it wasn’t understood how or why this earthquake occurred. Almost immediately after it took place, three U.S. Geological Survey (USGS) scientists– George Plafker, Artz Grantz and Reuben Kachadoorian (great names)– headed to Alaska to figure this out. In order to cover ground faster, these scientists would split up to cover a vast areas from air, on land and shorelines. As a result, they concluded over 185,000 square miles (larger than the state of California) of land was disrupted from this quake. Certain areas of land subsided by as much as 8 feet, while other areas rose as much as 38 feet (refer to diagram above). Mapping this uplift and downdrop would eventually become an integral piece of information when figuring out why this geological event occurred. However, due to a limited knowledge of plate tectonics, months of observations and field work would prove to be futile, leaving the cause of the earthquake a mystery. This is George Plafker (The Man. The Myth. The Legend), the USGS geologist that would solve the puzzle of the Great Alaskan Earthquake. [Image Source: USGS/Public Domain]

Of the three geologists that headed to Alaska to solve this puzzle, it was George Plafker that would put the newly formed theory of plate tectonics on the table. It was already understood that new crust formed at mid-ocean ridges, but there was no explanation as to where it went. Out of all the possible explanations being proposed, Plafker, in his own words argued, “ the oceanic crust is being pushed underneath that part of southern Alaska at a very low angle and there was slip on this, on the interface between the oceanic crust and overlying continental crust. ” Periodic fault slippage between these two boundaries produces strong quakes, which Plafker deemed the name “megathrust” earthquakes.

It should be noted, that this was the first time a geologist proposed that the largest earthquakes on Earth occur due to fault slippage at convergent boundaries (subduction zones). Plafker’s realization of this process changed our understanding of plate tectonics and its impact on the crust. Through his research, he suggested that the uplift and down drop of areas from these earthquakes, are the result of continental crust being compressed over many years where these plates converge. Eventually, the continental crust releases like a spring, which causes the earthquake. As a result, seaward areas are uplifted, while landward areas subside (refer to GIF above for a visualization of process). While this was a novel idea, Plafker still had to prove his theory to the geoscientific community. This is a core sample taken from region in which the Great Alaskan Earthquake occurred. Note the plant remains lying on top of the marine sediment. [Image Source:USGS/Public Domain]

By studying carbon dated core samples (depth of 50 feet) from subsided and uplifted areas in south central Alaska, Plafker was able to validate this theoretical pattern. In the image above you will see a core sample that shows ocean sediments (gray in color) with overlying plant remains. This marks a moment of sudden change in the topography from a past megathrust earthquake.

Plafker explains,“ it’s just an example of what has happened in the past and the analog what happened in the 1964 earthquake. Namely, abrupt uplift of a broad area of mudflats that are intertidal and then sudden appearance of freshwater plants growing on the surface. ”

By carbon dating the plant remains, scientists are able to figure out the age for that quake. Through their studies, a team of geologists concluded a total of nine megathrust earthquakes have occurred in this region over the past 5,500 years, making the average timespan between these quakes 630 years. 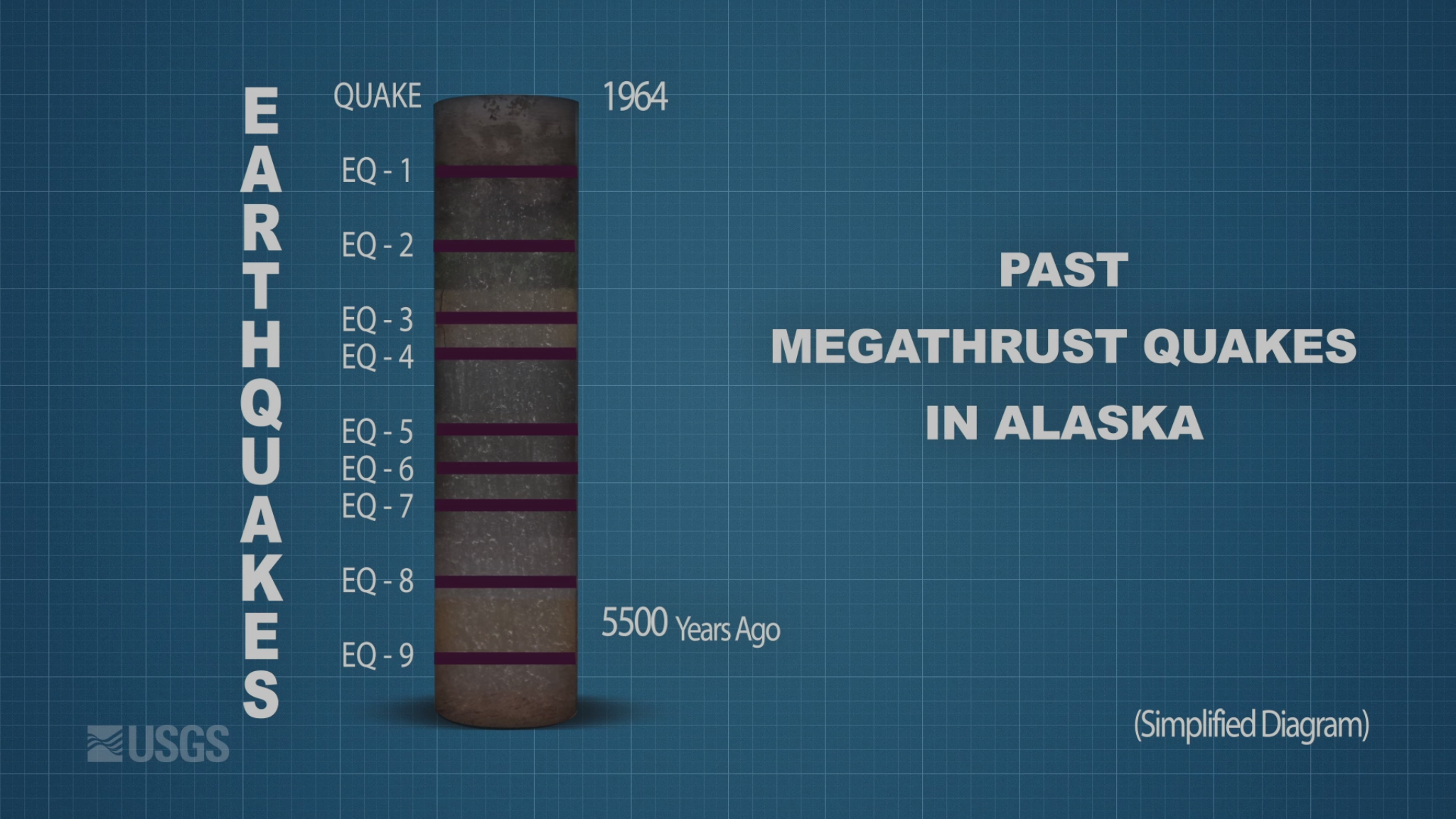 Another geological event produced by the earthquake in 1964 were destructive tsunamis. The largest tsunami, which was produced from the initial shift of plates when the quake began, travelled across much of the Pacific, affecting communities in Oregon, California, Hawaii and other regions of the world. However, the fjords along the south central Alaskan coast is where the most destructive tsunamis took place, resulting in most of the deaths from this event. Geologically speaking, what occurred in Alaska is very similar to what took place during the Tohoku Earthquake in Japan circa 2011. Although, the tsunamis that occurred in the Alaskan fjords were the product of underwater landslides (refer to soil liquefaction rather than continental uplift, which was the cause of the deadly tsunamis in Japan.

This simplified diagram displays the process of submarine landslides. The mass displacement of water occurring for the landslide, generates energy in the form of a tsunami. [Image Source: NOAA/Public Domain]

The Great Alaskan Earthquake of 1964 is considered to be the first subduction zone “megathrust” quake properly illuminated as such. The outcome of this discovery led to any future megathrust earthquakes– Great Chilean, Tohoku and Indian Ocean Earthquakes– being compared to the 1964 quake. Furthermore, it has led to the discovery of other subduction zones capable of producing megathrusts e.g. the Cascadia subduction zone. The profound and lasting impact of the Alaskan quake lived on, but in another form. Today, legacies such as the USGS Earthquakes Hazard Program, NOAA’s round the clock tsunami warning system and new building codes are the direct result of the megathrust quake that occurred in 1964. To say the least, the discoveries made by George Plafker and fellow geologists from studying this event is sort of a big deal in the geoscientific community.

Notification of Proper Fair Use & Acknowledging USGS/NOAA as Information Source: All information, imagery and screenshots for this article were acquired through USGS and NOAA publications, which is authored or produced by said organizations. As a consequence, all material in this article is considered to be public domain. Furthermore, the USGS Youtube video cited in this article has a Creative Commons Attribution license (reuse allowed).

If you enjoyed reading this post, be sure to give me a follow and check out the rest of my blog. Overall, my blog consists of scientific topics dealing with geology, meteorology, geography, food and history. The goal of this blog isn’t to earn money per se. While that is a nice benefit, I’m more interested in networking, learning, informing and helping the Steemit community grow to new heights. Also, be sure to use the steemstem tag and join @Geopolis if you're a fellow geologist! Thanks for all your support!

geology steemstem steemiteducation science life
2년 전 by keephy56
$41.00
135 votes
댓글 남기기 5
Authors get paid when people like you upvote their post.If you enjoyed what you read here, create your account today and start earning FREE STEEM!
STEEMKR.COM IS SPONSORED BY

This article was honestly a blast to write. It was impressively informative. While I knew of the processes occurring in the Alaskan earthquake, I had no clue how groundbreaking the geological discoveries were as a result of it. I may have to start writing more about the people behind the figurative rock face that have helped push our geological knowledge of this planet forward.

I love reading about geology from the early days of plate tectonics research!

$0.03
1 vote
댓글 남기기
[-]
geopolis54  ·  2년 전
Your post has been personally reviewed and was considered to be a well written article.
You received a 80.0% upvote since you are a member of geopolis and wrote in the category of "geology".
To read more about us and what we do, click here.
https://steemit.com/geopolis/@geopolis/geopolis-the-community-for-global-sciences-update-4