For this contest i will be giving away 100 steem power delegation (90 days) to the winner and to one of their friends!!

Rules for this contest

I will be picking a random winner from the comments below. You and your friend must do all of these to win!! So you will need some teamwork here. When your friend also comments they can retag you or use someone else. (but i will be using only the 2 names by the original person commenting and whoever their friend is @example

If there is no winner because you or your friend didnt do one of the 4 rules for the contest then i will start a new contest and add more steem power delegation (90 Days) each to the next contest.

giveaway free steem power delegation
2년 전 by ralph-rennoldson69
$31.37
200 votes
댓글 남기기 42
Authors get paid when people like you upvote their post.If you enjoyed what you read here, create your account today and start earning FREE STEEM!
STEEMKR.COM IS SPONSORED BY

that gif you have is so annoying, so distracting

I'm going to get carpal tunnel from trying put all these flag comments. This is the last spam contest I'm flagging this round. I'll leave the rest to my colleagues. 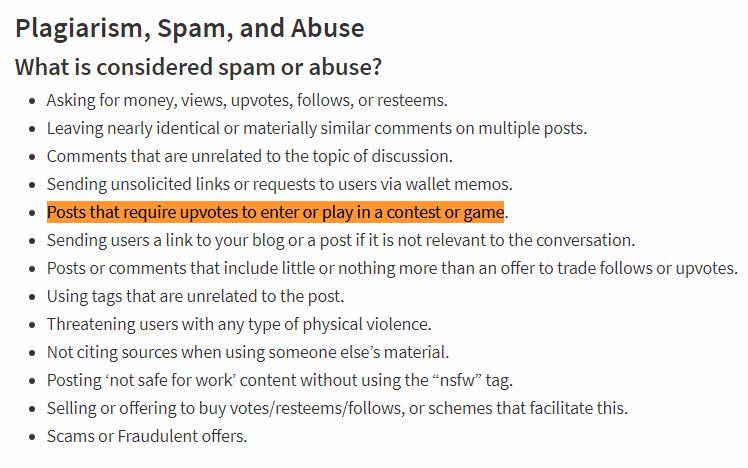 Steem Flag Rewards mention comment has been approved! Thank you for reporting this abuse, @anthonyadavisii.

But, but, @smartsteem has a whitelist to prevent spam from scams,...
:rollseyes:

We're going to give this guy a break. He said he is going to change so going to give him that opportunity even though he's made a lot of headway and earned rep using these questionable methods for some time.

I hope he really understands why what he was doing was manipulative and wrong. Even though the network is agnostic to morality, it does not mean people cannot evaluate the moral implications of their actions.

I am not sure if people just don't or don't care. It seems morality does take a second fiddle when people compete for power and influence at any cost using sleazy
gimmicks, tricks, hype and any other tactic under the sun.

It's disconcerting sometimes and I would be curious to know the number of spammers that have been built and established into the community because of smartsteem and other bid bots.

Makes me question what the hell I am doing and why. The reason being is , while I work to reduce the profitability of abuse, the bid bots do the opposite. I often ask myself why I should try to improve a network while they continue to diminish and degrade it.They just don't get it.

Then, I remember this peculiar thing about loving my enemies. Maybe Ralph will turn things around and not be like the others.

This is a good initiative. I'm glad @benedict08 let me know about it. We'd like to join the fun together. Thanks! ^_^

The luck of Christmas spills over us, @alejo1996

@dlivev
Thank you for contest !

The Joy of the Season's giving - @lmon

Thanks for the free giveaway!
I participate with @osso

Oh yeah, thank you!
I participate with @yelbosco! :)

Done tasks. I am pretty sure @mermaidvampire deserves the 100 delegation. Stay awesome.

Hello everyone. Again I visit your blog, and recommend @jennimorillo

@wandrnrose7 are you up for this again? 💕

Luck @perlanacarada, this contest is great

I'm with @wonderwop on this 😁

@ralph-rennoldson purchased a 34.23% vote from @promobot on this post.

Stay Pulchritude... Am going with @mbj

You got a 6.67% upvote from @booster courtesy of @ralph-rennoldson!