Lyme disease - How DANGEROUS is it? + my mom's story

Today I want to talk to you about Lyme Disease. Most of us I think already heard the phrase. It’s some kind of “popular” in its very own way and it has bad reputation online. Many people I know think of it as it was some kind of uncurable, terminal disease, very sneaky and hard to diagnose. How is it in reality? 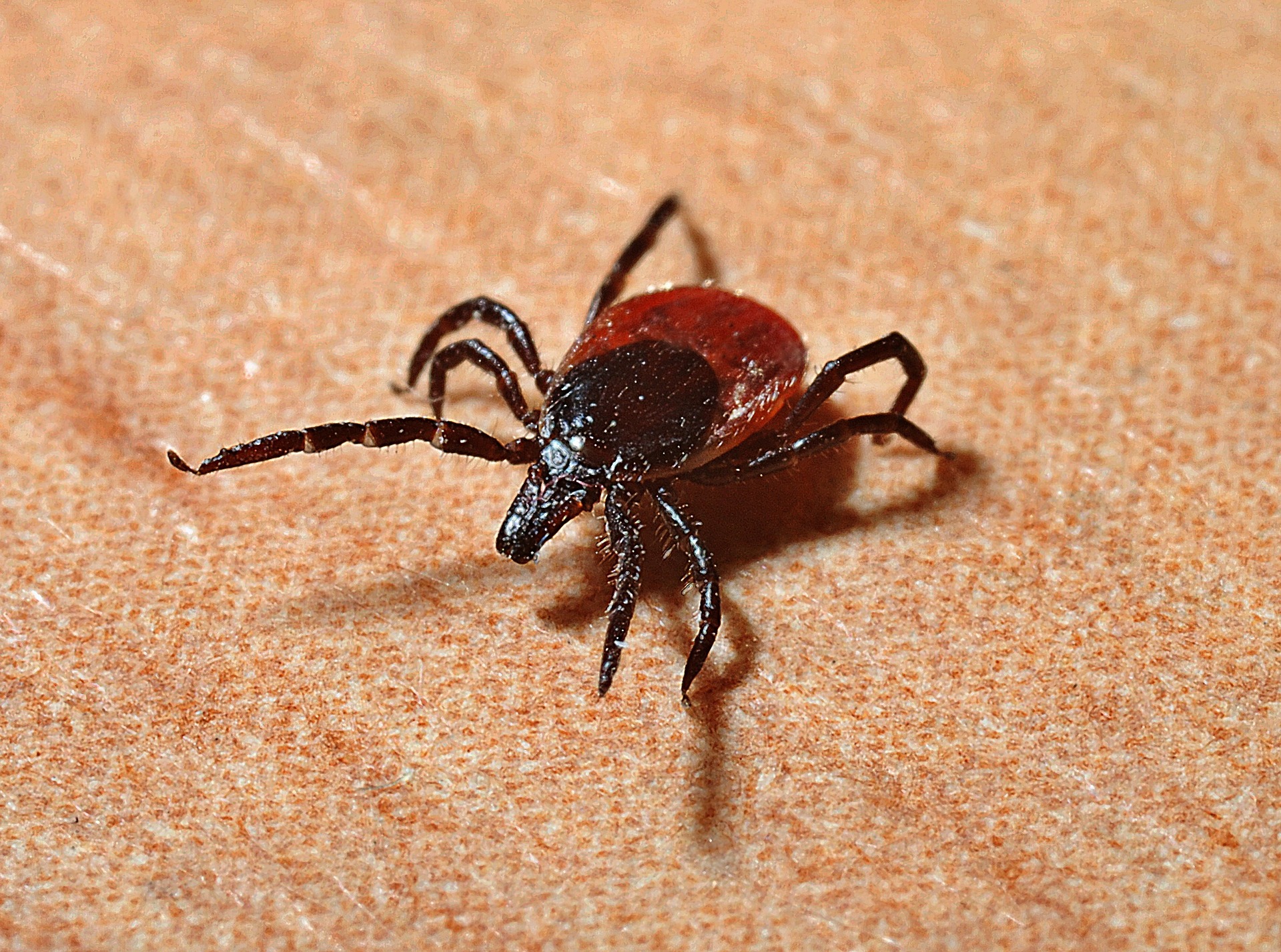 In beginning I would like to instance my mom’s story. It all started few years ago in the summer when me and my mom decided to go to the forest to collect some blueberries. We live near the forest so we go there often. I can’t actually say how many times in my live I was bitten by a tick. It’s not something extraordinary for me, my mom also gets bitten quite often. It is very interesting that usually my dad also goes with us and he never gets bitten. It makes me wonder about what it depends on: our blood type? our smell? That’s an interesting topic for a thesis.

Anyway, back to the story. She got bitten, removed it and completely forgot about it. The tick was located under the knee as I remember. In a few weeks she noticed a red smudge. My mom doesn’t like to go to doctors so she ignored it. I was a kid back then so I wasn’t aware how important it is and what we should do. Now I usually laugh that when I will finish my med school I will always come to her and she wouldn’t have to go doctor anymore ;) The spot was expanding and then after a few weeks it disappeared. Months past and nothing happened. Then in the winter she somehow find out about the Lyme disease and decided that she will go and see the doctor. She went there, he made serological tests and prescribed her an antibiotic and she’s fully recover now. Thankfully her story turns out very well, despite that she didn’t react at once.


What would happened if she didn’t react at all? What is Lyme disease?

Lyme disease, also called Lyme Borreliosis, is an infectious disease caused by a bacteria called Borrelia. There are few various species of the bacteria: burgdorferii, garinii, afzelii, japonica. They all occur in the Northern Hemisphere.

The bacteria are transmitted to humans by the ticks of the Ixodes genus. The infection happens through the injection of tick’s vomit or saliva. The bacteria first cause a skin change called erythema migrans, next general infection and secondary changes in tissues and organs. There are 3 stages of the disease:

1) Early localized infection:
In this stage red spot (erythema migrans) occurs. The look of the rash is typical: it is sometimes called “bull’s eye”. This symptom is pathognomonic which means that when it happens we can almost surely diagnose Lyme disease. What is very important erythema migrans may not occur at all! It doesn’t appear in about 20% of the infection which is very dangerous cause the infection may stay unnoticed. 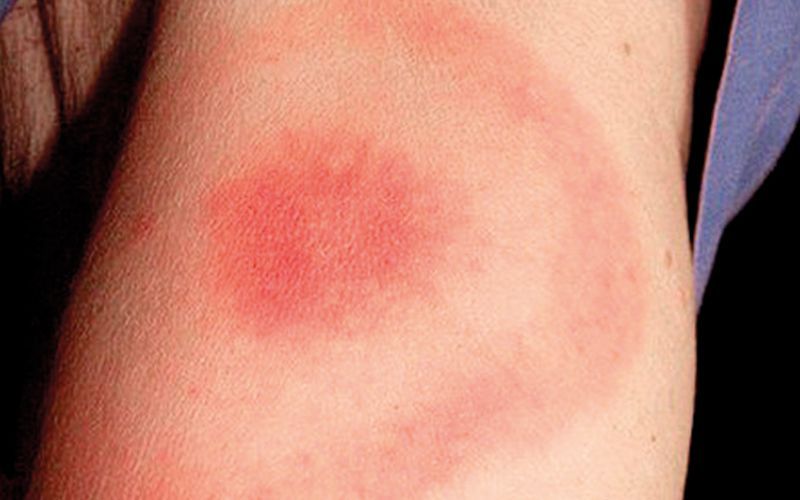 In this stage may also appear lymphocytoma (a small node usually located on the ear or forehead) and some flu symptoms such as fever, muscle pain and fatigue. 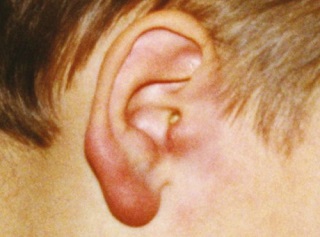 2) Disseminated infection:
This stage occurs a weeks or months after the erythema and only when the 1 stage was untreated or treated unproperly. In this stage Borrelia attacks the joints. Usually knees, elbows, ankle or shoulder joint become swollen and painful. What is crucial that Lyme disease mostly attacks just one joint: one knee, one elbow etc. The episodes of inflammation last for about a few weeks. In this stage can also occur inflammation of the muscle heart (very rare), inflammation of cranial nerves or meningitis.

3) Chronic infection:
One of the forms of the chronic infection may be acrodermatitis chronica atrophicans, which occurs many years after the infection and affects usually older people. It is situated in the crura. In this stage can also appear neuroboreliosis. It affects about 10-15% of the untreated patients. It manifest with sensory loss, paralysis of peripheral nerves and loss of memory. I think anyone would agree that it doesn’t sound good at all. But the true is the 2 and 3 stage happens rarely. I'm not saying that we should ignore it. I'm just trying to point out here that
Lyme disease became the thing of the hypochondriacs.
You may ask why? The answer is pretty simple. The first symptoms of the disease are non-typical. Are you tired? Is it hard for you to wake up full of energy in the morning? Do you feel muscle or joint's pain? Feel sick now? To answer completely we must look into serological tests. Briefly, they are test that check if the patient had the contact with the tick's antigens and if patient produces antibodies. There are 2 types of antibodies (used in the process of diagnosing Lyme disease) – IgM and IgG. IgM tells us if the patient had the contact lately, IgG are produced later after the contact and stay for a longer period of time. I've shorten this, but reality isn't so simple. The antibodies stays for a different time in each patient and many people have the contact with the antigen and it doesn't mean that they're sick. Doctors learn about how to analyze the tests properly. Patients often after surfing online decide to do the tests on their own. They get the results, they see increased amount of IgM or IgG and deduce: “I knew I got Lyme disease. Thanks God I decided to do the test. Now I must take meds to cure it.”. They often go to the doctors then and ask for a medicals and when doctors refuse to prescribe them patients feel ignored and mad. 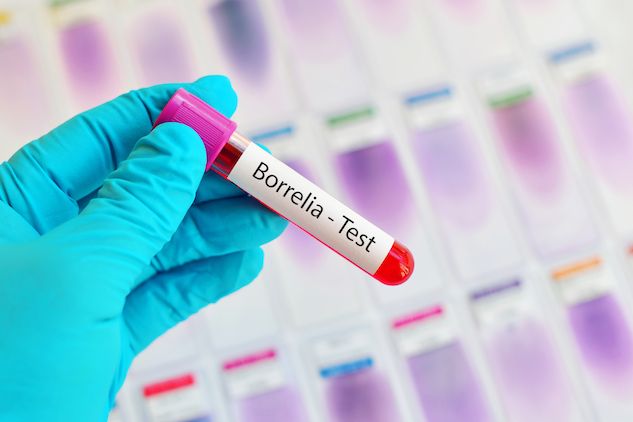 Photo by by Jarun Ontakrai/Shutterstock

You may ask now: Why do doctors ignore them? Aren't tests a prove? The answer is no. In my school teachers often say: **“We have to cure the patients not the test's results”. ** We cannot diagnose the disease if we don't have major symptoms. As I said before, fatigue is not enough.
The doctor will collect a precise anamnesis and estimate the risk of the infection. If there is a need, he will prescribe antibiotics. What is also important about serological tests is that the IgM antibodies appear 3-4 weeks after the infection. It means that it makes no sense to do test right after the bite!

The infection usually takes place about 36 – 48 hours after the bite. That’s why it’s so important to remove the tick early.

How to remove the tick?

Many people are afraid to do this, but it's actually very simple: just grab it around its head with plastic hook or tweezers and gently pull it up. It is important to not to twist it, scratch, do not apply alcohol, oil or butter on it (this one is weird but I heard about such case). Such behaviors increase the chance of the tick to vomit, what raises the risk of infection. If you won't remove it totally it doesn't increase the risk of infection! Remember to disinfect the place of bite. Observe it for about 30 days. Lyme disease is surely a dangerous disease if it's undiagnosed or untreated. Patients shouldn't diagnose or cure themselves. If they suspect an infection, they should go to practiced doctor and rely on his knowledge.

Did you have any conact with this disease? I would love to hear your stories. If you have any questions please ask me. I'm not a specialist but I will do my best to answer.

health life science blog biology
3년 전 by xxvjs50
$41.67
29 votes
댓글 남기기 15
Authors get paid when people like you upvote their post.If you enjoyed what you read here, create your account today and start earning FREE STEEM!
STEEMKR.COM IS SPONSORED BY

Thank you for posting this @xxvjs
This is very informative.
Two of my kids got bitten last summer and had the tick removed. There were no redness or other symptoms.

Thank you! I'm glad someone actually read this! ;)

Yes, I did and I'm looking forward to read more posts like that (:

Thanks a lot for educating us about this important disease. All the best to your mum!

Thank you! ;) I appreciate it!

Great post, I have my own story to share about being infected with Lyme, and I have friends and family who know what living with it is like all too well.

I would love to listen to your story! All the best xX

thanks for you amazing information....

Wow really great article @xxvjs, It's great to hear such solid information about a scary subject from someone like you! Keep up the good work, these posts are so informative :)

thank you very much! <3 I'm about to write more about other diseases to make them less scary!

Valuable information made more so by your personal experience (okay your momma's). Upvote 👍🏽

Thank you! Ii took me about 11 hours to research and write the article so I'm very happy to see that someone consider this valuable <3

I bet, it's very thorough informative. :)