History of the Light Bulb 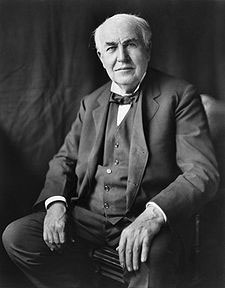 A Brief History of the Light Bulb
The electric light, one of the everyday conveniences that most affects our lives, was not “invented” in the traditional sense in 1879 by Thomas Alva Edison, although he could be said to have created the first commercially practical incandescent light. He was neither the first nor the only person trying to invent an incandescent light bulb. In fact, some historians claim there were over 20 inventors of incandescent lamps prior to Edison’s version. However, Edison is often credited with the invention because his version was able to outstrip the earlier versions because of a combination of three factors: an effective incandescent material, a higher vacuum than others were able to achieve and a high resistance that made power distribution from a centralized source economically viable.

Early Light Bulbs
In 1802, Humphry Davy invented the first electric light. He experimented with electricity and invented an electric battery. When he connected wires to his battery and a piece of carbon, the carbon glowed, producing light. His invention was known as the Electric Arc lamp. And while it produced light, it didn’t produce it for long and was much too bright for practical use.

Over the next seven decades, other inventors also created “light bulbs” but no designs emerged for commerical application. More notably, in 1840, British scientist Warren de la Rue enclosed a coiled platinum filament in a vacuum tube and passed an electric current through it. The design was based on the concept that the high melting point of platinum would allow it to operate at high temperatures and that the evacuated chamber would contain fewer gas molecules to react with the platinum, improving its longevity. Although an efficient design, the cost of the platinum made it impractical for commercial production.

In 1850 an English physicist named Joseph Wilson Swan created a “light bulb” by enclosing carbonized paper filaments in an evacuated glass bulb. And by 1860 he had a working prototype, but the lack of a good vacuum and an adequate supply of electricity resulted in a bulb whose lifetime was much too short to be considered an effective prodcer of light. However, in the 1870’s better vacuum pumps became available and Swan continued experiments on light bulbs. In 1878, Swan developed a longer lasting light bulb using a treated cotton thread that also removed the problem of early bulb blackening.

On July 24, 1874 a Canadian patent was filed by a Toronto medical electrician named Henry Woodward and a colleague Mathew Evans. They built their lamps with different sizes and shapes of carbon rods held between electrodes in glass cylinders filled with nitrogen. Woodward and Evans attempted to commercialize their lamp, but were unsuccessful. They eventually sold their patent to Edison in 1879.

Thomas Edison and the “first” light bulb
Thomas Alva Edison
In 1878, Thomas Edison began serious research into developing a practical incandescent lamp and on October 14, 1878, Edison filed his first patent application for "Improvement In Electric Lights". However, he continued to test several types of material for metal filaments to improve upon his original design and by Nov 4, 1879, he filed another U.S. patent for an electric lamp using "a carbon filament or strip coiled and connected ... to platina contact wires."

Although the patent described several ways of creating the carbon filament including using "cotton and linen thread, wood splints, papers coiled in various ways," it was not until several months after the patent was granted that Edison and his team discovered that a carbonized bamboo filament could last over 1200 hours.

Other Notable Dates
1906 - The General Electric Company were the first to patent a method of making tungsten filaments for use in incandescent lightbulbs. Edison himself had known tungsten would eventually prove to be the best choice for filaments in incandescent light bulbs, but in his day, the machinery needed to produce the wire in such a fine form was not available.
1910 - William David Coolidge of General Electric improved the process of manufacture to make the longest lasting tungsten filaments.
1920s - The first frosted lightbulb is produced and adjustable power beam bulbs for car headlamps, and neon lighting.
1930s - The thirties saw the invention of little one-time flashbulbs for photography, and the fluorescent tanning lamp.
1940s - The first ’soft light’ incandescent bulbs.
1950s - Quartz glass and halogen light bulb are produced
1980s – New low wattage metal halides are created
1990s – Long life bulbs and Compact Fluorescent bulbs make their debut.
The Future of the “First” Light Bulb?
Modern incandescent bulbs are not energy efficient – less than 10% of electrical power supplied to the bulb is converted into visible light. The remaining energy is lost as heat. However these inefficient light bulbs are still widely used today due to many advantages such as:

historical technology history inventor
4년 전 by ajibul9525
$0.00
12 votes
댓글 남기기 3
Authors get paid when people like you upvote their post.If you enjoyed what you read here, create your account today and start earning FREE STEEM!
STEEMKR.COM IS SPONSORED BY

Congratulations @ajibul95! You have completed some achievement on Steemit and have been rewarded with new badge(s) :

@ajibul95 you were flagged by a worthless gang of trolls, so, I gave you an upvote to counteract it! Enjoy!!