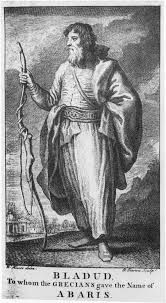 Abaris was one of great pelasgian preachers of Apollo's cult , who traveled around many lands during his life time , and without doubt he was the most famous . Apollo's cult was spread through the whole ancient world , and it was base for cooperation and peace among many tribes and nations who lived in matriarchy .
Origin of Abaris was in distant land of Hyperborea , behind northern wind Boreas , from the land with eternal sun. Because of his great feeling for justice, Abaris was well known Great prophet of Apollo cult . He represented and was considered as a real miracle among ancient mortals . He used to show an arrow, which he described as the symbol of his god Apollo. He composed and spread diverse and wide prophetic messages of god Apollo. Abaris was famous by curing sick people with music. history religion cult matriarchy
5년 전 by abol44
$0.00
2 votes
댓글 남기기 0
Authors get paid when people like you upvote their post.If you enjoyed what you read here, create your account today and start earning FREE STEEM!
STEEMKR.COM IS SPONSORED BY