Dear valued Steemit readers. It's been a little while since I wrote about our long term project of breaking in our mare, Nayyerah. Personally I don't like the term as it implies that a conquering of spirit through domination is required to ride a horse. I use the term only so you know that we're in the process of teaching Nayyerah how to enjoy time with a rider.

One of my previous videos of Nayyerah's unrestrained behaviour around me

At about that time, Nayyareh wore a saddle on her first walk up the street and back with admirable ease. That was a big success for us and you can see the pictures of that here. 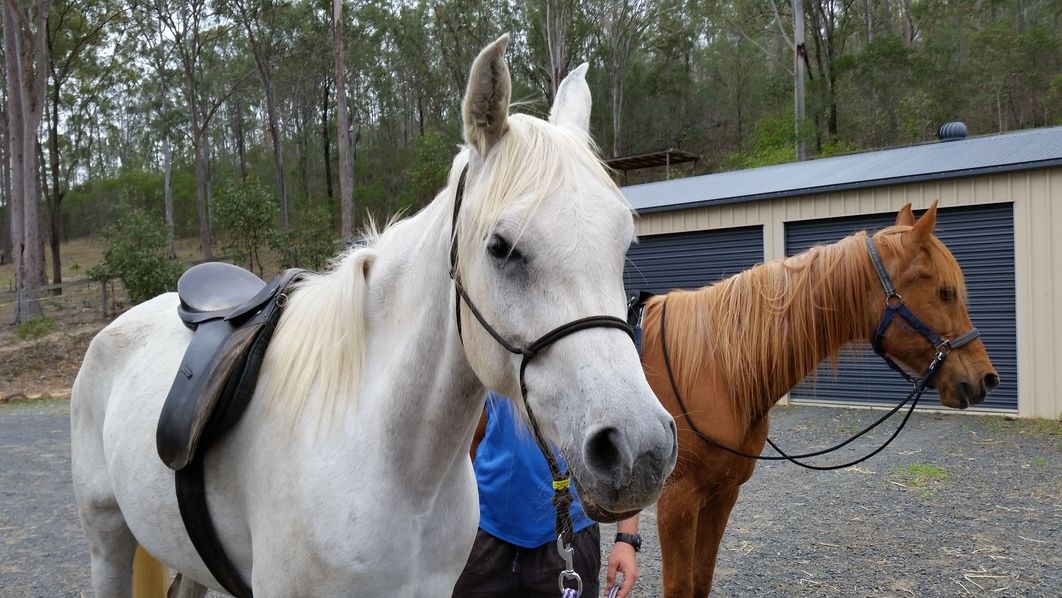 Nayyerah's first time in a saddle, what a cool customer.

During her training I've gone through periods of fear. Fear of injury, fear of failure, but mainly fear of ending up in a wheel chair for the rest of my life. As much as we do our best to communicate with horses and read situations well, maliciously or otherwise that can snap you in half with a flick of a hoof. It's been one of the hurdles that we've needed to overcome. I wrote some thoughts on that here

Only a couple of months ago, we started her lunging naked and under saddle. This part of her training she has struggled with but has made amazing improvements with only a few sessions. They're very quick learners and never forget a trick. They say that you never get off the same horse that you got on; a phrase that highlights the fact that they learn and respond to all experiences they encounter. That's why we try to be consistent, loving and patient at all times. There's a neat video that I edited together (assuming YouTube hasn't blocked it for the music backtrack) that you can watch here if you want to see her starting to lunge.

So what's the latest?

Well yesterday was the most recent installment. It's been a long journey and we're not "there" yet (where ever "there" is) but yesterday gave an insight into one of the principles I mentioned above. Memory.

Unlike humans, horses don't require constant reinforcement of knowledge to remain proficient at a task. Obviously it helps to train regularly to keep them mentally and physically stimulated, but to them the concept of never forgetting how to ride a bike applies to just about everything in live.

Case in point.... I've been meaning to throw a saddle on Nayyerah and mount her again given that the pace of live recently has meant that some time has passed since we'd last done this. I was curious about how she'd react and decided to do some build up work prior.

The day before, I spent a bunch of time with her in one of our paddocks. She's very affectionate with only a small amount of attention. I clipped and filed her hoofs which she was extremely cooperative with. She stood still and lifted her hoofs for me, sometimes with only a gesture or in anticipation of me starting work on them. I was able to get all around her hoofs, especially the hind ones which requires your head to be under the belly and right in front of those powerful rear limbs.

I was so impressed with how cooperative and affectionate she was being, even resting her nose on me and gently nudging me in a snuggling fashion. This was a great foundation for the mount the next day.

OK, so along came Sunday. We put a halter on Nayyerah, groomed her and saddled her up. She acted like an old hand; not once flinching as I adjusted the saddle and tightened the girth. In fact, she was better than many "broken" horses. Getting that last bit of tightness out of those big leather straps takes quite a bit of physical force and she only had to slightly adjust her weight to accommodate the heaving on the straps.

I then mounted her from one side which she was fine with. She stood dutifully and we rewarded her with praise and rubs. Then my wife lead her around the yard with me on her back. She's still learning to take commands (let's call them requests rather than commands) from the rider and having two people is a nice safety measure at this stage.

She'd literally only taken a few awkward steps under saddle previously having never walked with weight on her back before. Yesterday, again, she was like an old hand. Effortlessly walking around the yard with no concern for me on her back. After a short amount of time I dismounted with a jump (I don't use stirrups to dismount) which she again was fine with and we rubbed her and shared in her success!

Nayyerah's first and second time ever being mounted under saddle, now six months ago. The investment in time pays dividends for a lifetime.

Then came the other side. She was a little more fidgety but we just brought her back to stand in the position where we were walking and again she took me as a rider and walked around a little.

Another wonderful triumph, and to think that this horse has never even seen a bit, let alone suffered the torment of having one in her mouth. It's staggering to me that some people require the use of pain compliance devices and still get thrown off, kicked and badly injured. There's nothing that beats the experience of sharing achievements with an animal that is capable of inflicting massive injury but doesn't because they respect you, not because they fear pain.

Building a relationship means you don't just work together, but play together too. Down time is important and who doesn't get along when sharing a morning coffee?

I was so breathtakingly proud of her, I just hope she knows that and could read our emotion. The point is, months have passed since our last mount and regardless, she not only managed to remember her past training but build upon it to achieve even more than before. What amazing animals. I look forward to posting more when we get her responding only to a rider. Ultimately going for a gallop on her will be indescribable. She's fast. I've seen her in open space and the ground thunders under her. Her aspiration is like something from Jurassic Park and she covers ground like an aircraft. That's a way off however, all in good time. We'll enjoy that when we're both ready.

horses animals teamaustralia psychology success
3년 전 by nolnocluap66
$30.95
33 votes
댓글 남기기 8
Authors get paid when people like you upvote their post.If you enjoyed what you read here, create your account today and start earning FREE STEEM!
STEEMKR.COM IS SPONSORED BY

nice work mate, I'd love to have a big enough property for horses.

It's been one of the happiest times of our lives living with enough space to be with our animals. Really recommend the lifestyle if you can manage to integrate it into your life. Thanks!

This is so rewarding to watch. The trust and respect between you and Nayyerah is amazing. Why would anyone "break" horses any other way? It will be fantastic when you are able to ride her!

I love so much seeing how you treat those beautiful animals! I wish every rider would understand that there is absolutely no need for bits in their mouth. But most people think that animals are there to please them and to do what they want from them without teaching the right way without pain and fright. You shouldn't use the word breaking at all - that's such an awful word and what you are doing has nothing to do with it. Working with an unbroken animal is the fun and that's how it should be :)