Splash - the face of drought

Currently, in South Africa's Western Cape province, there is a massive drought on. It has reached crisis proportions with a looming 'Day 0' date when the taps will be turned off and we will all have to queue for water. People have rallied to save (and it's going pretty well) and to reward us and urge people to conserve further, the Western Cape government in their infinite wisdom have designed a 'water mascot' that pretty much everyone is sure is intended to scare the bejeesus out of anyone mis-using precious water. I mean, that must have been their intention right? Otherwise why on God's green earth would they have designed this: Splash - the face of drought. These people may have had knives to their backs

Ok, so that's scary af. Splash was unveiled earlier this month to cries of horror from the general public and an increase in the incidence of small child bed-wetting (presumably followed by the burning of sheets to hide the evidence of this 'water wastage'). Somebody designed this and dear God somebody else selected it. Presumably there were others. What those ones must have looked like I can only imagine as some Alien Ressurection style scenario where Ripley found the room full of her earlier clones. Committees of people must have voted on this thing and it's creepy brethren and somehow decided that this one was the best option... Was their goal to cause everyone to drink alcohol instead to erase the images? Time will tell... Of course, the local meme engine has been having a field day with this one: 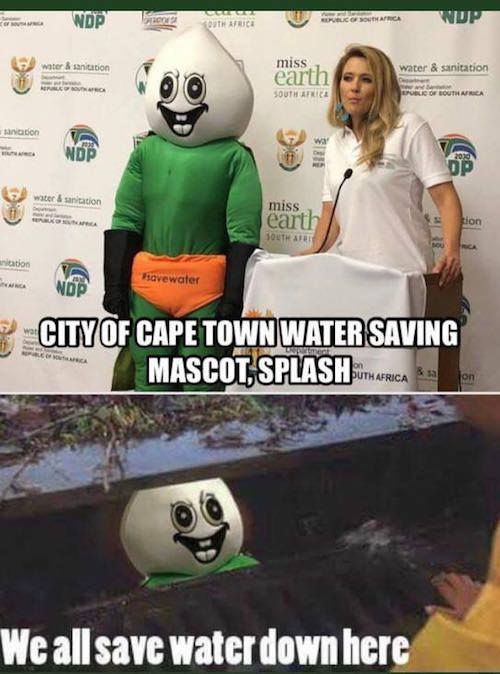 And even better, some enterprising soul made a video that will either make you laugh or pee though presumably doing the second summons him, kind of like candy man but without the need to repeat five times.

Brilliantly done. Now where's the dude who did the original design so we can lynch mob his ass for adding hysterical fear to an already panicked situation?

Images and video sourced from: http://www.2oceansvibe.com/2018/02/23/someone-made-a-horror-movie-trailer-with-cape-towns-water-mascot-video/

humor life blog southafrica news
2년 전 by holothewise49
$1.17
9 votes
댓글 남기기 12
Authors get paid when people like you upvote their post.If you enjoyed what you read here, create your account today and start earning FREE STEEM!
STEEMKR.COM IS SPONSORED BY

Praying that the drought hit area gets enough rain. We are also having a dry spell. Hope the wells don't dry. The mascot is not friendly as you point out.

haahhah increased bedwetting in children and who knows maybe even adults. lol Their idea was great but the execution was terrible as this mascot is scary and I would like to run into in a dark alley. lolol

Sorry to hear about the water shortage. Hopefully, the drought will end soon and God will send some rain. We have plenty of rain here in Italy. Hopefully, these clouds travel to Cape Town after. :)

Yeah, they clearly didn't think this one through 😂

That is pretty scary. Kind of more like a scary clown than a friendly mascot. I would be running away. Thanks for the post! Hopefully the drought ends soon!

Hahahahahahahaha! On another note how is the toilet situation in south africa? Because the whole water closet thing is a serious waste of water. Modern composting toilets really make a difference there I wonder if anyone has thought about it on a grand scale in cape town ect ...

Well, we have standard loos most places, so right now everyone is just applying the 'yellow mellow' rule 😂

Holla Holo. I have been so incredibly busy building recently that I haven't had time to pop by your blog. But this evening I found myself in need of reading dry humor from one of my favorite word smiths on Steemit so I figured I'd stop by for an overdue visit. Comical post.... the smile from the blonde in the first picture looks a little...well, not forced. More like some one has told her to smile while extremely constipated. One end or both are potentially in a large amount of discomfort. Great post though. Going to check out your other stuff now. Oh and as a quick note, the initiative @davemccoy and I set up is growing fast. So fast that it's hard to keep up with really. If you want to check us out we can be found on our feed #newbieresteemday

Hey there :) - I'm glad it's taking off so well! Yeah, I haven't had too much time to write recently but after this field season I'll probably have a gap. So I'm sure we'll see each other around these parts more ;)

Hey, thanks. The whole uproar around this thing was just too funny not to post 😂