San Nicolò and the Krampus - A very alternative Christmas [ENG]

This post is an English translation of this other.

Today is December 6, and in my areas (the eastern Veneto and Friuli) we celebrate Saint Nicholas, or rather San Nicolò, as we call it.

This austere figure of early Christian Anatolia bishop gave life to the ruddy and good-natured Santa Claus, whose iconography has nothing traditional, it was created by Coca-Cola (but this is another story). The tradition of exchanging gifts today, rather than Christmas Day, is still alive between our people, even if in regression.

Moreover, another folklore element is linked to San Nicolò, an element that contrasts sharply with the sugary Christmas habits of today, made of lights, little songs, little angels, decorated trees, nativity scenes, good feelings and unbridled consumerism. The night of San Nicolò is also the night of the krampus.

The krampus is a monstrous and demonic figure present in Austria, Bavaria, Slovenia, Croatia, Hungary, Czech Republic and, in Italy, in the mountainous areas of Trentino-Alto Adige/Südtirol, Veneto and Friuli-Venezia Giulia. Some anthropologists think that it even has an origin in the pre-Christian beliefs of Eastern Alpine populations. The name of this devil has the same etymology of the word "cramp", since in the past centuries it was believed that night cramps were due to devils that tormented the sleeping people by biting them.

The night of the krampus in Tarvisio (Udine province, Friuli-Venezia Giulia, Italy)

San Nicolò, in a tradition alive until the last century, brought gifts to good children, and coal to bad children, using a krampus that he subjugated to carry the coal sack. Very often, the krampus, although chained, was left free by the saint (very little "saintly") and terrified the bad children, whipping them with a birch lash. This somewhat grim tradition, carried out by two adult, specially disguised, members of the family, was used to give an annual review of terror and discipline to the children not inclined to obedience.

Nowadays, the krampus invade the cold streets and squares of the Alpine countries for a night of terror, very "walpurgis-like". The proper date is the night between 5 and 6 December, but now the various municipalities of the Alpine arc organize their parade of krampus throughout the whole month.

Decorated with heavy wooden masks with long horns, often sculpted with great skill, and covered with a long-haired costume with goat's hooves, the figures (all males, even those who wear a female mask, the "krampa") are gigantic and disturbing figure, who drag chains and bells, popping long whips. In an infernal parade with lots of burning straw bales and juggling with fire, they follow Saint Nicholas, dressed in episcopal vestments and a patriarchal beard, who distributes candy from a cart. 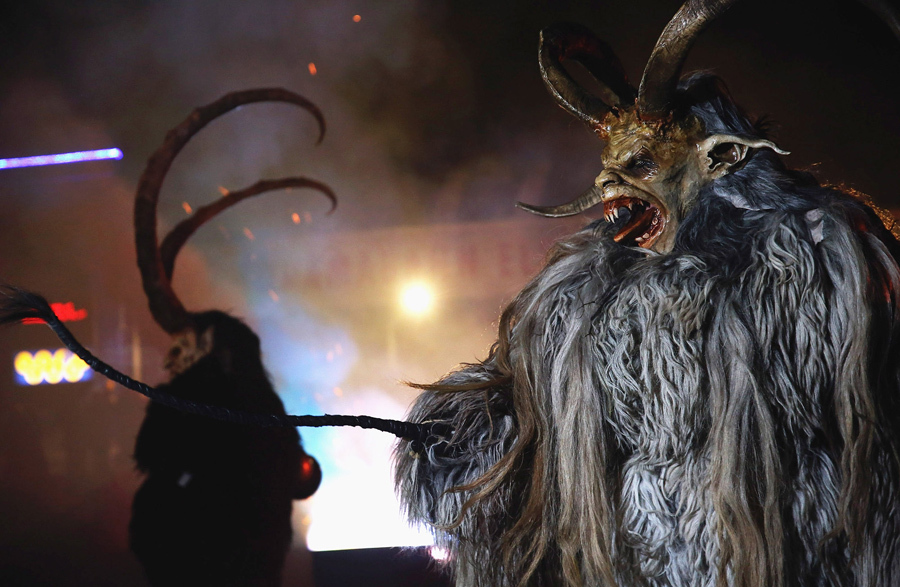 The masks of the krampus are remarkable wooden sculptures (photo: Johannes Simon / Getty)

However, the most beautiful and terrible part of this festival, with its forms still pagan, happens after sunset. Then, San Nicolò disappears, and the krampus are unleashed, abandoning themselves to feral screaming and almost bestial scenes, chasing people in the streets and terrorizing them. It's all part of the show, even the concrete risk of taking painful lashes on the legs. The disguised figures are not for the subtlety, almost as if they were really possessed by demonic presences, and do not spare anyone, continuing to rage until late at night. It is said that a krampus should never reveal his identity or take off his mask in public, under penalty of disgrace, and this anonymity contributes to the feeling of impunity and loss of inhibitory brakes, even if the display of violence has limits. Let's face it, though, if you wore such a terrifying mask, you wouldn't enjoy scaring as many people as possible?

Personally, I saw the krampus only once, in broad daylight, but I assure you that when one of them lowered his head and charged me like a billygoat, with the costume that made him look more than two meters tall and very wide shouldered, the heavy wooden clogs that resounded on the porphyry of the square, and the guttural roars amplified by the mask, I swiftly retreated. Imagine all this, and more: the dark barely illuminated by reddish flames, the narrow streets, the crowd, the breath that condenses in the cold air around the masks, the whips that pop and bite the calves like cramps ... not at all the usual, melense, Christmas atmosphere, right?

Thanks for reading! If you liked it, please leave an upvote, comment or resteem.

italy story folklore travel christmas
2년 전 by marcoriccardi59
$92.35
99 votes
댓글 남기기 18
Authors get paid when people like you upvote their post.If you enjoyed what you read here, create your account today and start earning FREE STEEM!
STEEMKR.COM IS SPONSORED BY

This is so interesting!! I never knew this! never came across this information anywhere!

Thank YOU so much for sharing this with me :D I love learning new things and I would have run away very fast if I saw one of those coming after me too!

Thank you very much, I plan to write some other post about curious and less known things of my country, in the future! ;)

I read this and kind of want to go into research about African masquerade traditions and share them here. But then... I am a lazy arse. Really interesting knowledge you shared. Thank you.

Don't be lazy, please. ;) I would like very much to read something about African masquerade. My brother-in-law got a serious collection of original masks, a couple of them with some gris-gris still attached.

Congratulations @marcoriccardi!
Your post was mentioned in the hit parade in the following category:

I can only say thank you, @arcange :D

Yes!!! You got a curie vote!! Finally. You are so good!!! Love this!
And we had Santa and his helper come when we were little. The golden book and the black book!!
When my mom was little, they actually put her brother in the bag and carried him off!!
Talk about parenting by terror!!!

I knew It would have happened @mariannewest, and even told Marco about it.. he's very talented. Now Marco it's good that you put them on SP.. the best long term investment is SP if you believe in this platform's future. However, I recommend a 1 -1.5 sbd boosting (buildawhale i.e.) per article becouse It often has a multiplier effect. Marianne, the community has a lot of potential if focused imo ;-)

I think so too. and you have been doing a great job of community building!!!

@mariannewest, I need to chat with you. I was been very lucky with this post, and I want to do something for the freewriters community. I was thinking about sharing a bit of my Steem Power with you for a period, but I know someone put SP or SBD "in the pot", as you write in the prompt posts, and I really don't know how it works.

Thank you so much!! Let's chat next week -that is when my delegation goes away. I have been giving everyone at least a 7c upvote - more when there were less entries. That comes to more then the SBD share would have been. Next week, we are in new territory again. :)
I have 5 sbd from deeconlee. He did a transfer. I can make a post to show how that is done.....

Congratulations @marcoriccardi! You have completed some achievement on Steemit and have been rewarded with new badge(s) :

The @OriginalWorks bot has determined this post by @marcoriccardi to be original material and upvoted(1.5%) it!