Today, Sunrise announced a new Gundam project called Mobile Suit Gundam Narrative (Gundam NT). It will be released as a movie on November 2018. The story is set in the U.C. timeline, in the year 0097. That is one year after the events of the Mobile Suit Unicorn Gundam, featuring what seems to be an upgrade of the Unicorn Gundam Phenex. The main protagonists have been revealed. 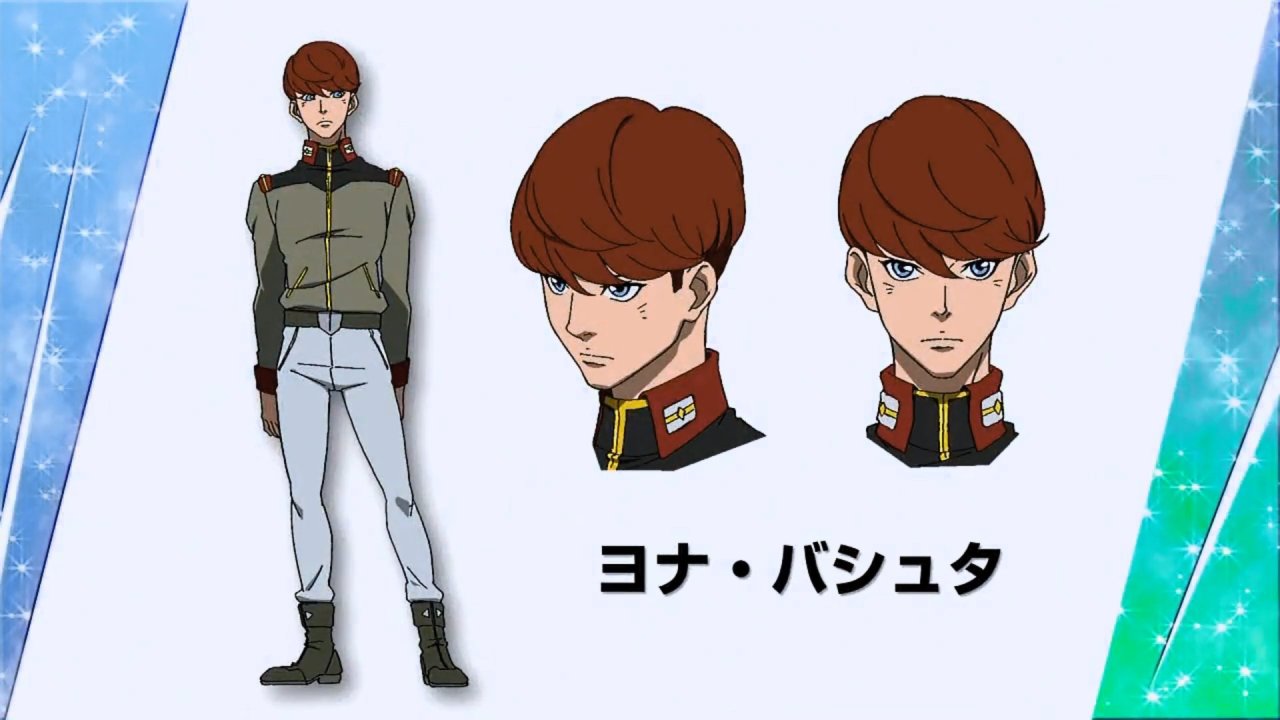 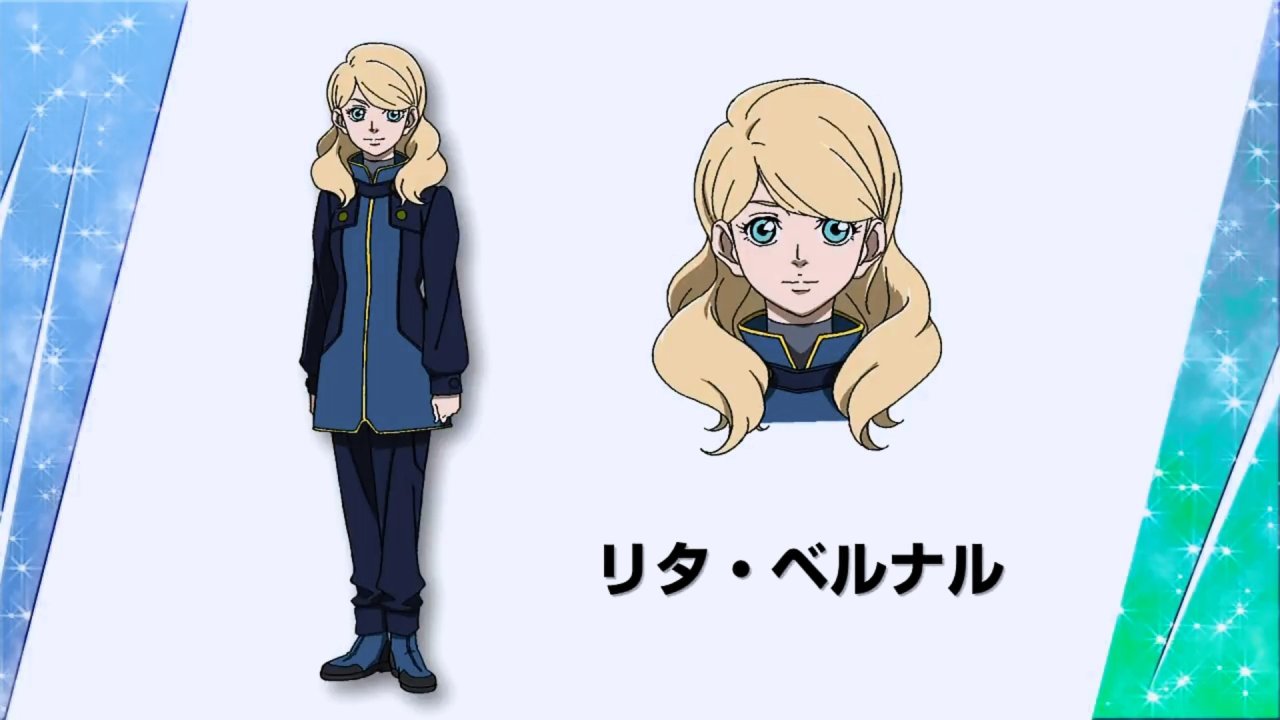 The main Gundams from the series have also been revealed. 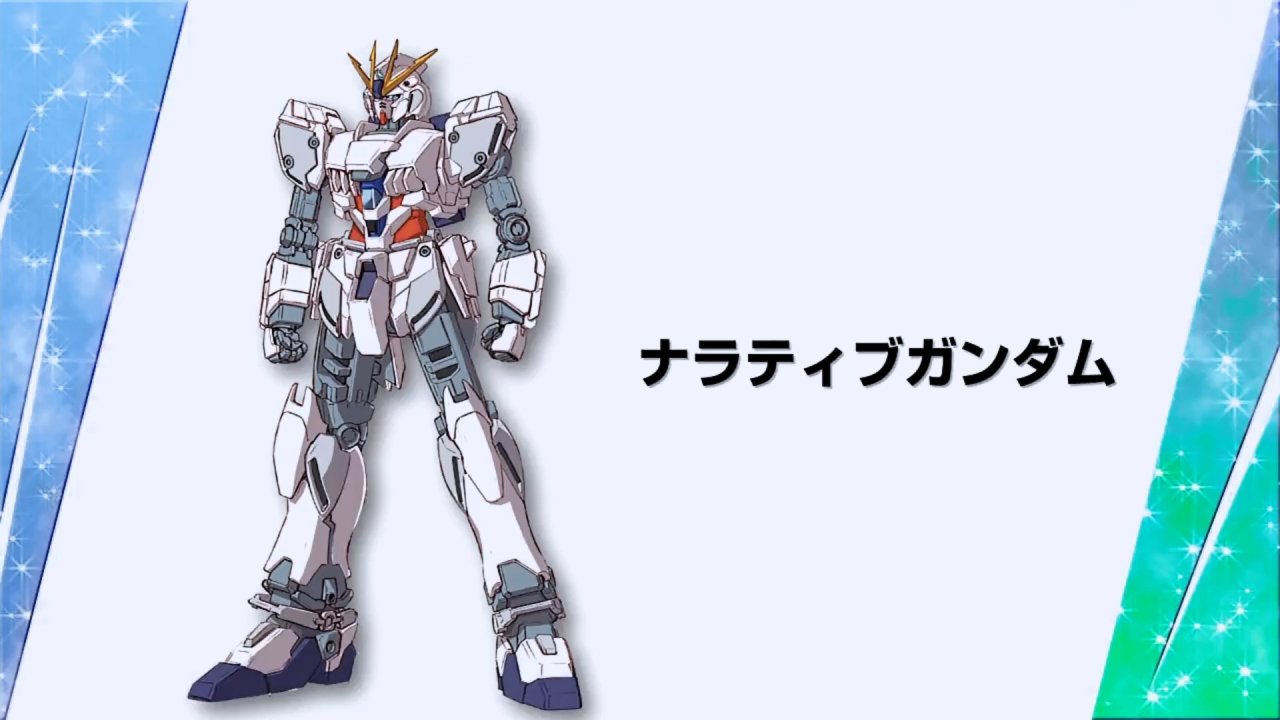 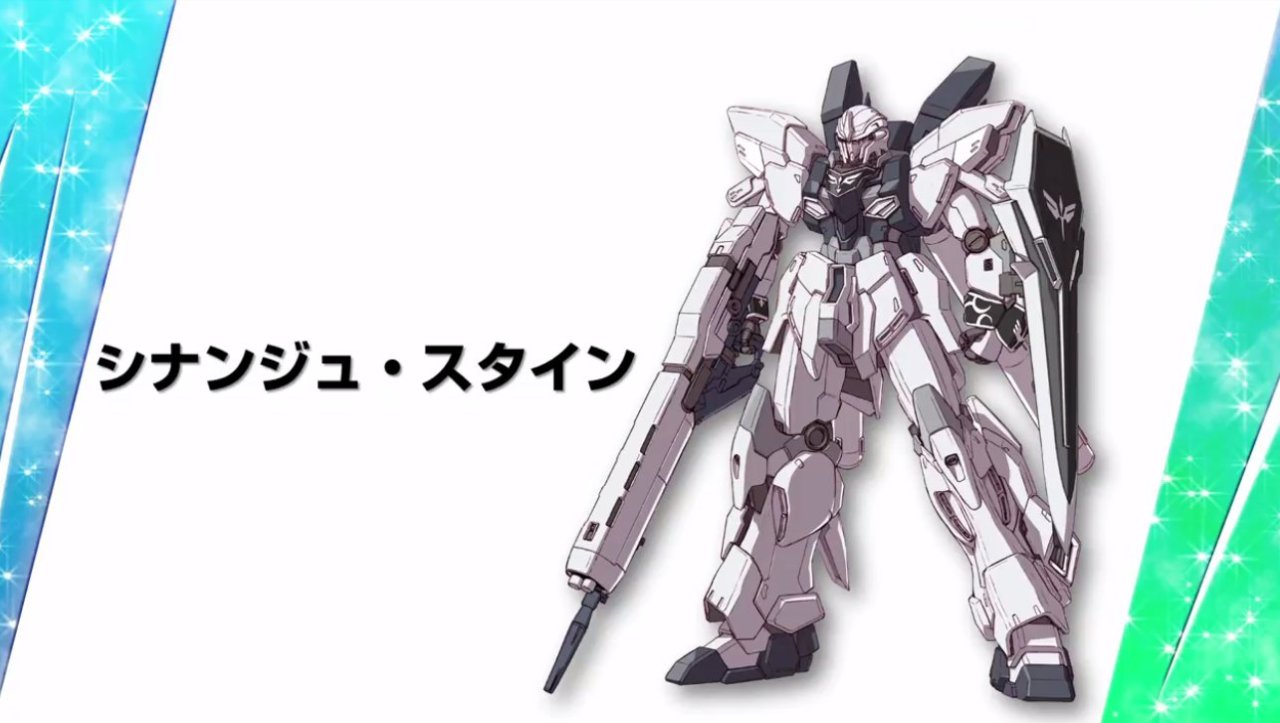 If you like Gunpla, the HGUC 1/144 Unicorn Gundam 03 Phenex [Narrative Ver.] will be released in June 2018 and it looks gorgeous! 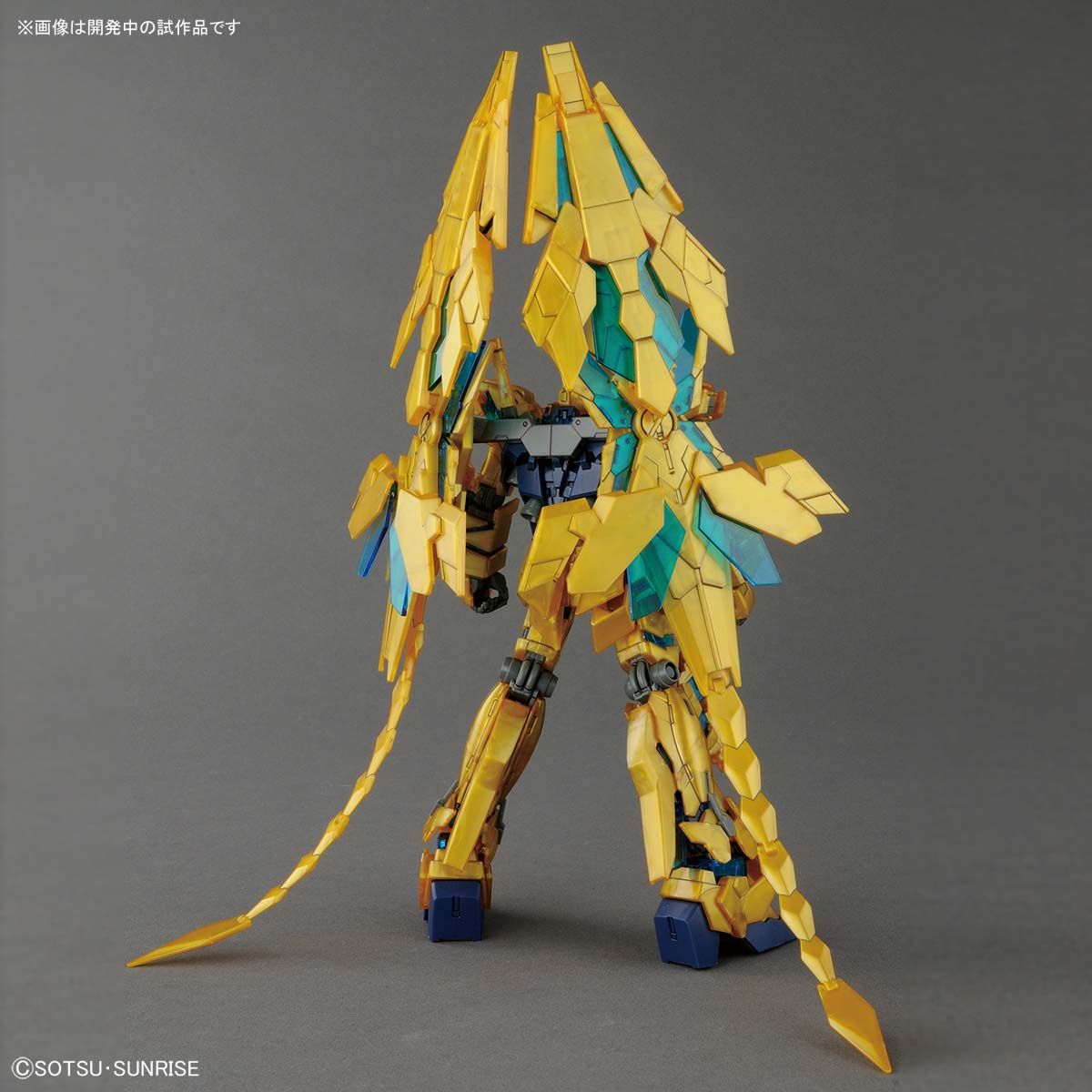 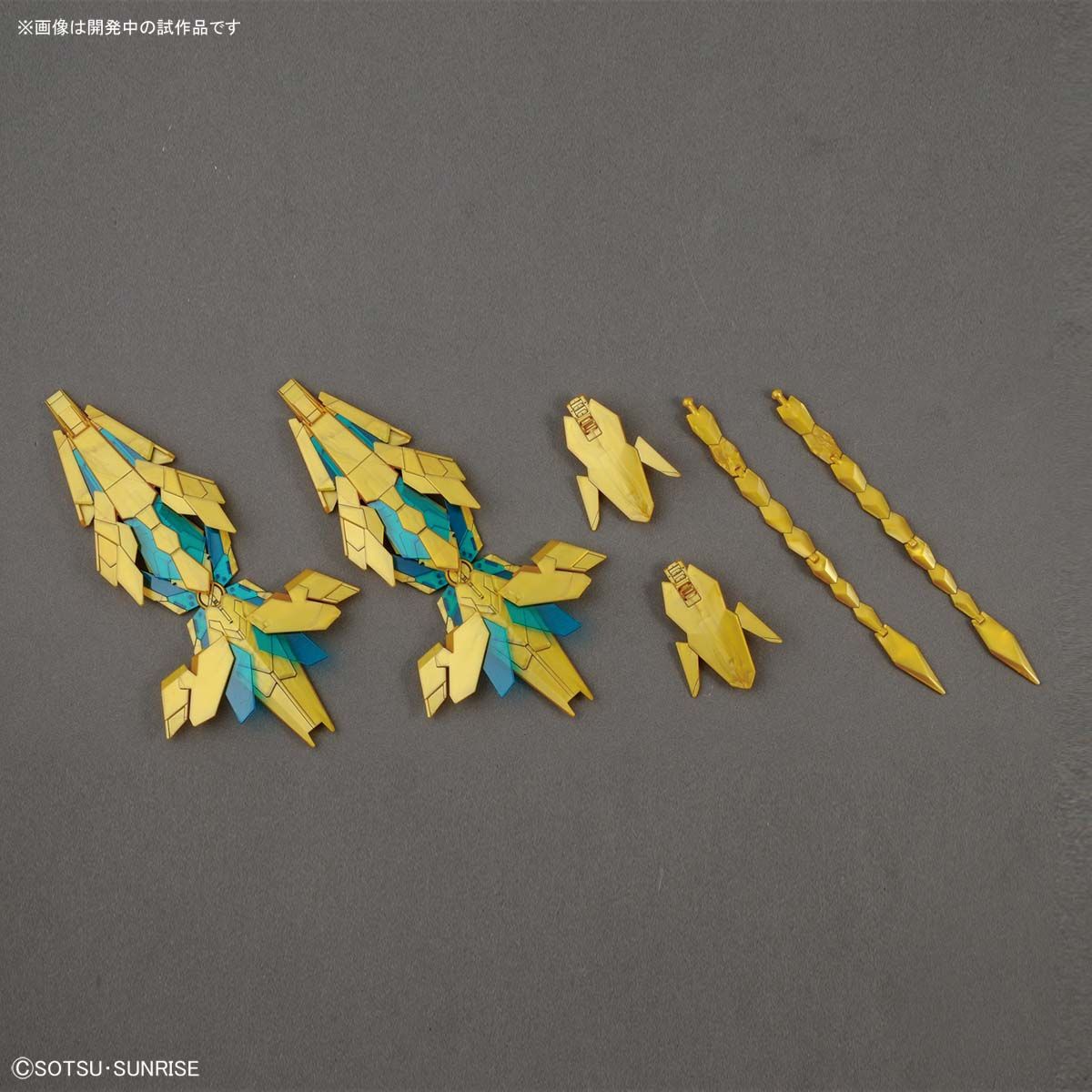 Here's a brief scheme explaining where in the timeline this new Gundam project is located. 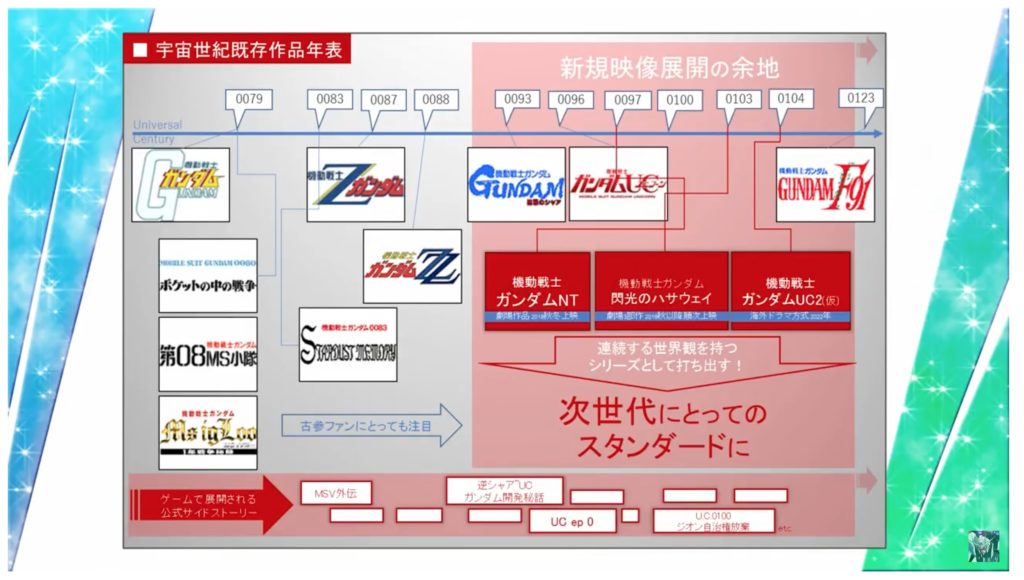 The plot synopsis, taken from the official website (translated by AnimeNewsNetwork):

U.C. 0097. The year the Laplace’s Box was opened. Despite the revelation of the original charter for the Universal Century, which acknowledges the existence of Newtypes and their rights, the world remains largely unchanged.

After the destruction of the Neo Zeon remnant force known as the Sleeves, the event that has come to be known as the “Laplace Incident” seems to have drawn to a close. In the final battle, two Full Psycho Frame mobile suits displayed power beyond human imagination. The menace of the White Unicorn and the Black Lion were sealed away from public consciousness, and were consigned to be forgotten by history.

But now sightings of the RX-0 Unicorn 03, long thought lost two years ago, are being reported. Its name is Phenex, an immortal golden bird.

Among the staff members that have been confirmed are Shunichi Yoshizawa as director, Harukoshi Fukui writing the screenplay, Kumiko Takahashi as original character designer, Kim Satoshi as character designer, Hiroyuki Sawano returning as composer, and more noted on the official site.

You can check the trailer for the new Mobile Suit Gundam Narrative bellow. It looks amazing!

I'm actually anxious for this new Mobile Suit Gundam Narrative movie. If you are too, share your enthusiasm bellow in the comments. Cheers! ^^ japan japanese culture entertainment lifestyle
4년 전 by madviking57
$41.61
33 votes
댓글 남기기 18
Authors get paid when people like you upvote their post.If you enjoyed what you read here, create your account today and start earning FREE STEEM!
STEEMKR.COM IS SPONSORED BY

Wow! A new Gundam, this has to be awesome! I've just recently finished watching "Iron-Blooded Orphans" which was superb!

I'm currently watching Gundam Divers, the continuation of the Gunpla thing... :p But yeah, I'm anxiously waiting for this one too. ^^

You got a 1.32% upvote from @postpromoter courtesy of @madviking!

You got a 1.63% upvote from @upmewhale courtesy of @madviking!

This post has received a 3.85% upvote from @aksdwi thanks to: @madviking.

You got a 9.44% upvote from @redlambo courtesy of @madviking! Make sure to use tag #redlambo to be considered for the curation post!

You got a 4.45% upvote from @nado.bot courtesy of @madviking!

Nice post ! You got 9.95% upvote from @flymehigh. Earn free sbd/steem daily by delegating(renting) your SP. We share high return, click here to delegate your sp to flymehigh if you don't know, how to earn passive income by delegating your SP click here for more info Join our discord You can promote your posts. Thanks.

You got a 3.13% upvote from @dailyupvotes courtesy of @madviking!

Release the Kraken! You got a 3.41% upvote from @seakraken courtesy of @madviking!

You got a 3.77% upvote from @minnowvotes courtesy of @madviking!

You got a 3.20% upvote from @brupvoter courtesy of @madviking! 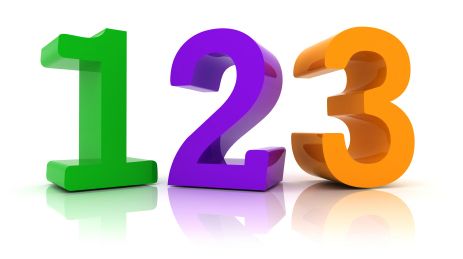 "1,2or3-GuessTheNumber" - Use your logic only in order to guess a secret number selected by the random number bot every day. If you wish to participate, please put your number (i.e. "1", "2" or "3") in memo and send exact 1 SBD to @monitorprivate Steemit account. Check at the end of the day if you guessed the correct number randomly selected by our bot. By giving the right answer you will be awarded with 2 SBD to your account. Anyone is welcome to participate only once every day. Good luck.

Great, I love to see the Universal Century get extended!

This post has received a 6.96% upvote from @lovejuice thanks to @madviking. They love you, so does Aggroed. Please be sure to vote for Witnesses at https://steemit.com/~witnesses.