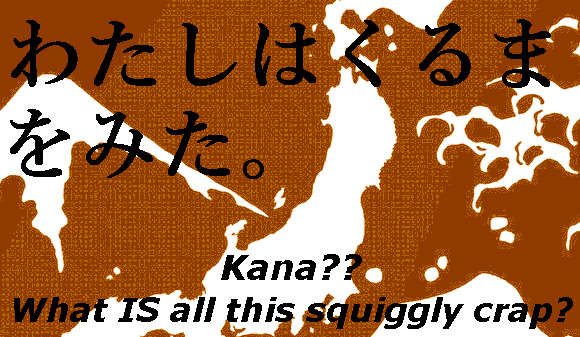 Basically, they are phonetic alphabets for reading & pronouncing Japanese and are collectively called "The Kana". They look very foreign and squiggly and are easily distinguishable from Kanji (Chinese Characters) due to their appearance.

(I'm going to leave some links to resources for learning the Kana below, so keep your peepers peeled for that)

Chinese characters came over to Japan and were adopted into the language as the writing system. The two languages are actually very different though, so the pronunciation markers and order of the characters were incompatible with Japanese spoken language. Because of this limitation, the Kana were adapted from some cursive Chinese characters for their sound instead of their meaning. They have since become much simpler and divergent from the characters that they were in the original system.

These are (more or less) the Hiragana and Katakana of today.

And here's why you need to learn them: Hiragana in the wild

There are 46 characters for each Hiragana and Katakana, but if you learn Hiragana you will be able to relate a lot of them to each other. They're pretty darn easy to learn and I don't really think that any sort of mnemonic devices are strictly necessary. That being said, the use of mnemonics can be helpful to learn them more quickly, so I don't see anything wrong with it.

I am of the mindset that you don't really need to know handwriting that much, so you can essentially skip that step in learning to have quicker more focused progress. It's not something which is that useful in modern day society and there's nothing stopping you from learning it once you're fluent if you do have a use for it. You can pretty easily learn the Kana as well as the ~2200 main Kanji in <3 months if you're not sitting there obsessing over stroke order and such for endless hours. I barely ever hand-write anything in English as it stands anyways.

As with anything you can use flashcards for, I would recommend using SRS to study and retain the Kana as you learn them and to maintain them in your brains. There are some apps specifically for Japanese that have SRS built in, but it seems simpler to me to just use Anki and download a prebuilt flashcard pack for whatever you need.

Below I have an Anki deck for Hiragana&Katakana in the resources section modified from one on Ankinet.

So First up is Hiragana:

Note: these charts are read top to bottom starting at the top right corner 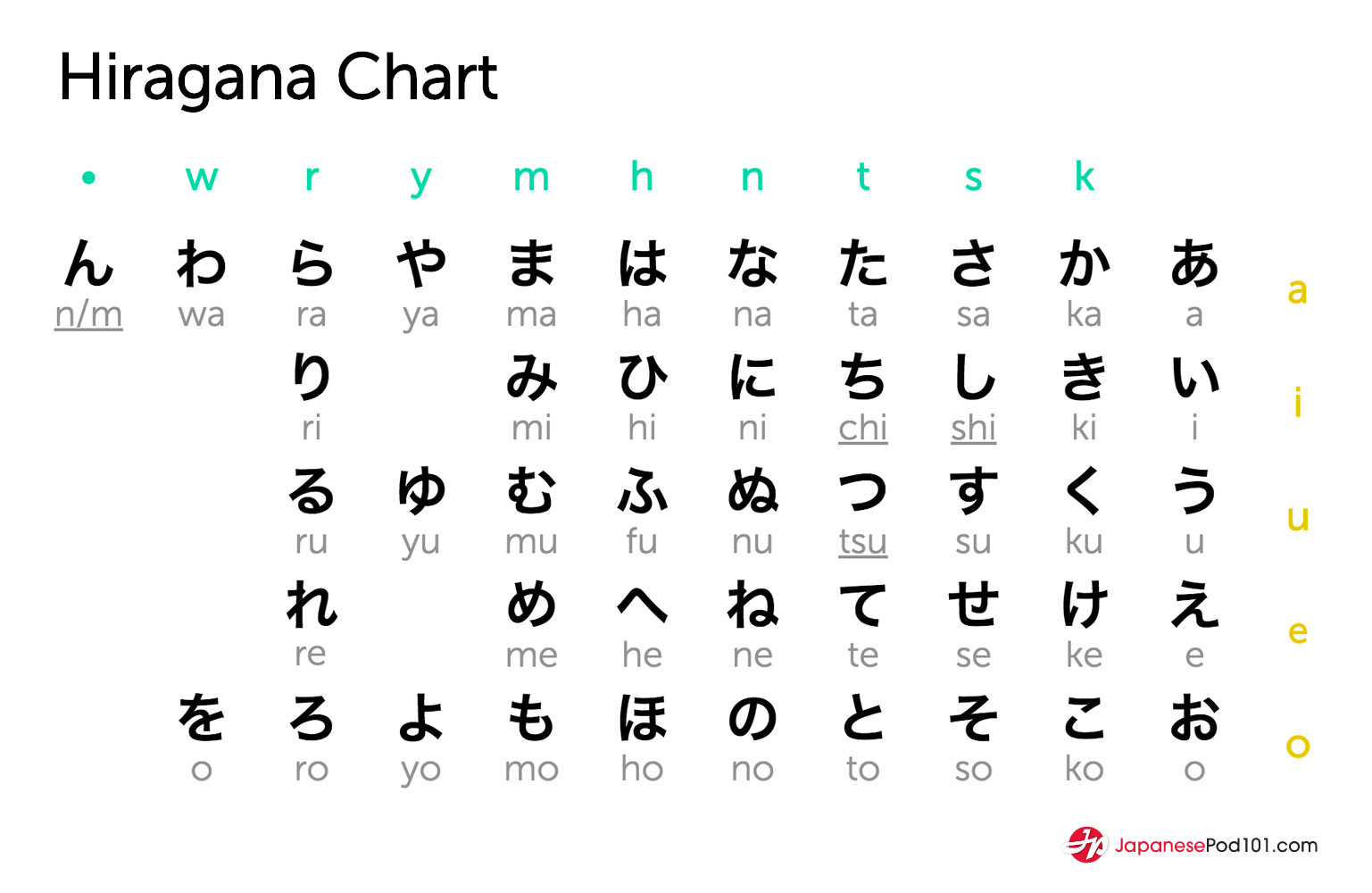 You'll notice that they're the more squiggly of the two. This is what NATIVE JAPANESE is written in when Kana is used and it is the FIRST thing that Japanese kids learn when learning to read. It is more common than Katakana and is used in pretty much every sentence in Japanese.

Hint: If you see something written with Chinese characters and you see some of these mixed in, you know you're looking at Japanese ;) 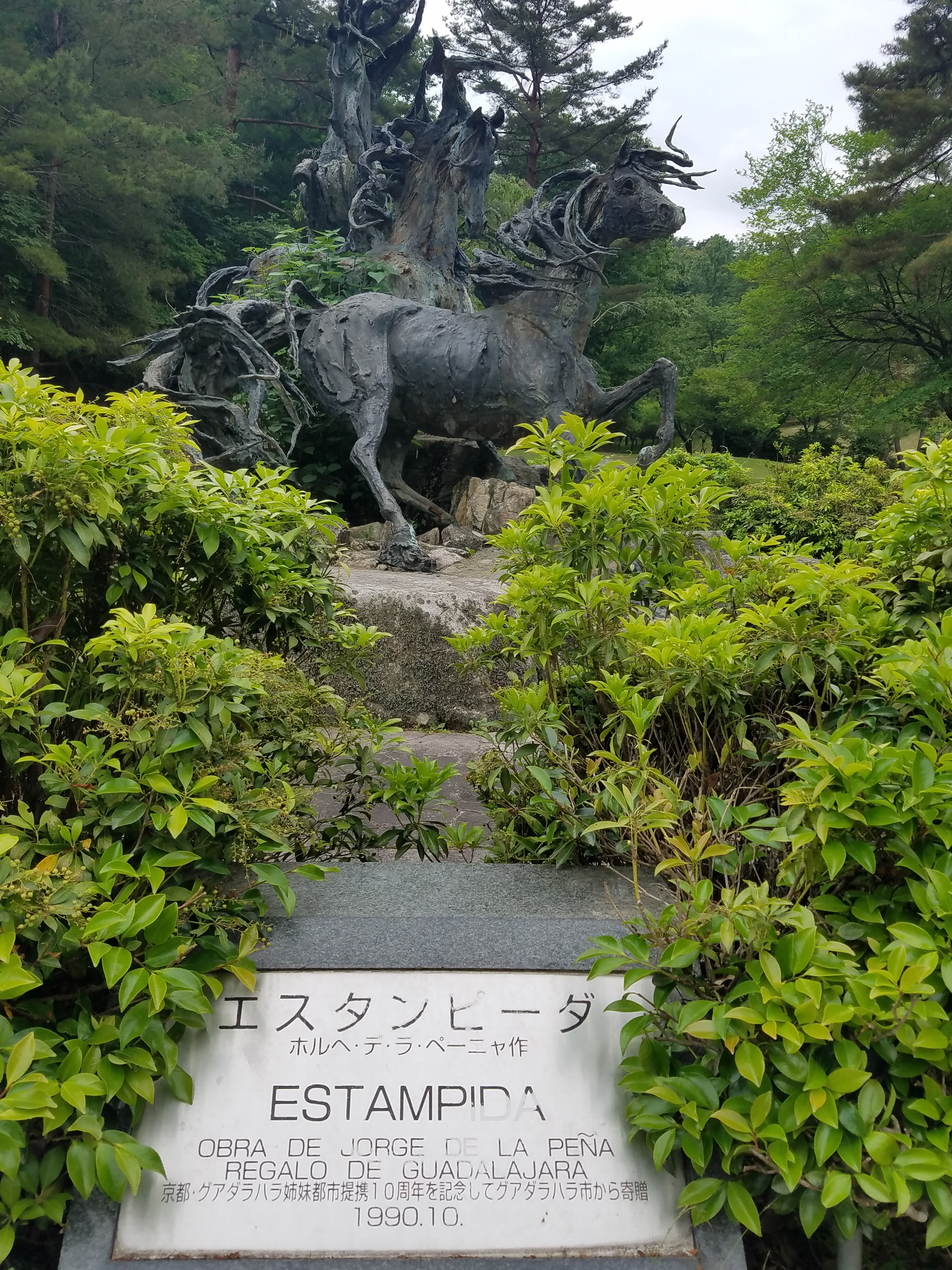 Katakana in the wild

Mostly used for Foreign words... If you see Katakana, then it's quite possible that you're looking at a Japanese-ified English word. Ex. メール: Me(e)-ru; English word: Mail; meaning in Jp: Email.
This is a good example because occasionally they will have a different meaning/connotation in Jp than in En.

Katakana is also occasionally used instead of Hiragana to add emphasis (much like italics) and also to represent rigid or robot sounding speech.

That's the basics of Hiragana and Katakana.

There are a couple of pronunciations oddities to be aware of when reading actual text... The particles は (ha), を (wo), and へ(he) are pronounced as "wa", "o", and "e" when used as particles.
Ex. わたしは- Watashi(wa) which would be used if you were saying something about yourself.
The partical (wa) is written as (ha) in Hiragana, but it has the wa pronunciation. I used this example to point out the two different ways that wa is written when using Hiragana: わ and は depending on whether or not it is a particle or part of a word.

Other than that exception, the pronunciation is very consistent.

Also, the Kana can be put together rather creatively to produce all of the different pronunciation combinations in Japanese. But I'll be putting out a follow up to this post in the next day or two covering those situations.

It took me about 2-3 days to learn both Hiragana and Katakana and I pretty much do flashcards for maintenance once a week or so.

Here are the resources I promised for learning the Kana:

PS. I'll personally give you a SBD if you tell me what the cover image says... Just for fun. Should be cake if you can read Hiragana ;)

The Background for the cover is from an unknown pinterest user... I would have liked to credit them, but it has been plagiarized so many times I could not find the original source.
Here's a source: Click Me!!

The charts are from Jpod101, they are linked above.

japanese education brains life photography
3년 전 by brains57
$31.86
33 votes
댓글 남기기 25
Authors get paid when people like you upvote their post.If you enjoyed what you read here, create your account today and start earning FREE STEEM!
STEEMKR.COM IS SPONSORED BY

It was really nice reading this, used to have a Japanese classmate in basic school. He taught me some numerals in Japanese, I'll be glad to learn more.

Thanks Jaff! I'll be glad to learn more too ;)

Cool how each character has a consonant vowel pair. Not sure if I could tell you what the squiggly stuff is on your map :)

Calling all SBD hunters! All the best @brains

Yeah, the language is pretty neat. I'm not really sure how the language came to be so distinct from neighboring Chinese, but it sure is interesting and unique.

Haha, you haven't missed too much at all!

Hehe. That's a good news , knowing I'm not late ..I just read this particular post and it so easy to grab(understand) I love how you compiled your content👍. I will be looking forward to more posts by brainsssssssssssssss!!!🙌

I like your energy. Will be looking to hear from you more in the future ;)

Oh yea 👍 just watch me .
I'd comment on some Japanese and Korean bloggers here on Steemit . I'd make use of Google translator but I'm sure sooner or letter I'll be good typing some shorts sentences .

Following -- This is a great post and super useful. I've been using Duolingo for around 2 months and have both pretty memorized, but it does a poor job (like it just flat out doesn't) explain the subtleties like the different wa's. Now I know!

If you don't mind me asking a question I've had.. Your Kata example wasメール. It seems there are a lot of words like it with the ー in between Kata that don't seem to get pronounced (example プール - Pūru = Pool). How do you determine how the ー will be pronounced?

Oh, I didn't think that Duolingo had released their Japanese program yet... New information to me.

The two Kata examples you quoted seem to be pronounced more or less the same to me... With just an elongated vowel. It was something I was going to cover in a bit more depth next lesson, but if you have something more to add or another example I'd be happy to figure it out with you.

Yup, Duo released it towards the end of May. Only reason I caught it was they had a release event at our local amusement park (their company HQ is in my hometown)

And no, I think that makes sense, and I'll definitely be looking out for the next lesson then, sorry for jumping the gun :) I misread the Me (e) as an e sound and didn't put 2 and 2 together that it was just emphasizing the previous vowel. Makes much more sense if I look at Pūru elongating the u. Thanks for the response too, hugely appreciated

Wow cool. I will have to check it out because I have used Duolingo before for Spanish and it's a pretty cool program.

Yeah. I definitely don't know everything, but I've been studying the language for a while and I've spent a lot of time drudging through information to get to where I'm at. What sort of stuff have you learned so far? Have you gotten into the Kanji at all or are you focusing on functional spoken Japanese?

Your time put in clearly shows and has already helped me, so I appreciate it.

I visited Japan in late May/June so before that I picked up just a little functional spoken "survival phrases" from JapanesePod 101 podcasts. Nothing really in depth, but enough to get around ok. It was beautiful and would like to go back one day not feeling as much like an ignorant tourist so since then I started Duo and its really all 3. It starts you off with Hirigana as a basis and slowly replaces them with Kata and Kanji where applicable. It starts with functional basics - intros, telling time, family, foods, greetings etc. Where it struggles are points of emphasis and particles I would say. Still a complete beginner, but slowly trying to improve :)

You know, I was actually in Japan around the same time as you... Basically may 15th-31st. Funny.

Sounds like they built a pretty cool program on duo... You'll improve no matter what if you get into a habit of doing at least a little bit every day, but no doubt you'll need other resources to complete your studies.

It says, Watashi ha kuruma wo mita (I saw a car.). I wonder what kind it was and where it was going.

It was a Mazda of some sort and it was stationary.
Thanks for dropping by, and since you read through that I'll send you my little bounty ;)

I remember stumbling on your posts a while ago. Cool to hear from you!

If you haven't sent it yet, there's no need for the bounty. I only answered the question because it was fun to, and because I was curious to see if there was really a car involved. It looks like you visited Japan recently. I hope enjoyed it. Do you have any plans to make a return trip?

I made and sent the bounty in the name of fun anyways ;)

I definitely enjoyed my trip to Japan, lot of good experiences. I plan to return pretty soon... I was actually thinking of going to Sapporo snow festival in February, but my best friend's kid is supposed to be born right around that time so I might end up missing it.

I just saw that you sent the bounty. Thanks! I enjoyed the memo; )

Thanks for this lesson really nicely explained :)

it just awsome...first time I got something which can help me..all credets goes to your content...

. Not sure if I could tell you what the squiggly stuff is on your map .
thanks for searing .

Hi @brains, I just came across your posts on Steemit and they are very helpful (wish I had resources like this when I started learning). These days I am interested in comparative linguistics, and have been trying to pick up some Korean as well. I'll be keeping an eye out for your other Japanese posts :)