Steemit is a social platform where people can publish aspects of their lives that they consider interesting for several reasons. Some seek / offer pleasure, others curiosity, some bet on impact or surprise, you can find anything.

The themes are unlimited, the only thing they all share is one thing... One idea ... And it's making money. This idea could be considered a limitation that the authors have in Steemit.

I do not mean that this limit is bad, that it should be eliminated or moved. Money is what makes people want to work their publications well, it is what motivates us to sell our work. Of course there are more reasons, but this is the one we all have in common.

Freedom is not in the lack of rules. Freedom depends on the rules. Thanks to her. Freedom is the power to decide between one thing and the other. That is, the ability to follow or break it. No, freedom is not about breacking the rules. Do not take that path...

Neither are people living in countries to the point of anarchism, such as Venezuela, where the law is nothing more than a suggestion, more free than others. I'm talking about the rules of the game, whether implicit or explicit. I do not speak of law nor norm, I speak of patterns that are followed. Patterns that are followed in a general way become the rule.

More free is the one who knows how to use them in his favor. He knows when to follow them, and when it is absolutely necessary to ignore them. It is the example of the legal argument "in self-defense".

Here in Steemit we have freedom, and you can guess what conclusion I want to reach. Steemit needs to learn to break the rule for hits own benefit. The rule is the monetary benefit, the rule in Steemit is capitalist.

Yes, yes, another communist who says that capitalism is the problem. Whatever man, there are some things you have to admit no matter how much you hate communists. No, my friend, capitalism is not the problem, the problem is us, it has always been us, capitalism is what it is and it is neither bad nor good. It is not "The" problem, is "A" problem. It is not bad, it is not even avoidable. It is a problem, because it raises conflicts like any other system. Capitalism is the rule, we have known how to use it to our advantage, now we must know how to ignore it for the same reason.

If people could make crappy publications and simply inflate them from bots to make money on this platform we would be seeing blank pages with predetermined titles... Regardless of what people say, the publications that reach the trending page all meet a minimum of quality (at least those that I have seen), maybe not in content (topical, vocabulary, creativity), but in basic RULES (use of images, markdowns). They can be disgusting and harmful to the human intellect, but they give the appearance of having been professionally written.

MY POINT. Steemit is losing the possibilities of accepting in its midst the most varied, crazy and spontaneous content that can arise among its users.

All I see is dick sucking comments, or positive feedback, and extreme care in not hurting each other feelings. We are not friends in Steemit, because I can tell my friends when they suck at something, and I better be mean with that shit, because we do not want to look stupid nor be average.

So, just like the Smash Mouth's song: Why can't we be friends? I mean, how are we supposed to help ourselves when our goal is to take the money, despite the many initiatives that exist with that objective^? We can not be friends, because we are COMPETITORS. It is not enough that some see that reality and others do not. When Steemit has the ease of a person fully self-confident (honest with herself, in the most cruel and understandable ways) at that time will result in a team, with members who love each other, hate each other, mock, grieve , they avenge, they reconcile, they associate...

We won't stop being competitors, it is good to compete, but we need to make it real bruh. Recognizing that we are competitors.

Still do not know what I mean by breaking the rule?

With breaking the rule I mean to put in the heads Steemit's users an idea: the freedom to fill the content of their publications with anything, take it to a personal level, and feel the possibility of being discovered by their own individuality, and not just because of its potential to make it easier to sell some product.

^Example of those initiatives is the discord channel, the competitions and the #sharkschool of @yallapapi... Who by the way might be the first to think "damn communists" when reading this. Although I just saw his latest post about Steemit's transofrmation and I think we have different perspectives on a similar issue, of course that his argument is based on the reality of Steemit (I dont even understand it yet); mine, on the other hand, is based on imagination. I have a vision. @yallapapi has a mission.

Yes, what I am exposing here is based on imagination. As you can see in the rest of my publications, I have certain ideals with which I judge absolutely every type of organization (I am also a psychology student in Venezuela). These ideals are those of democracy, arts, and philosophy.

And here I will develop an illustrative example related to art of what it can mean to BREAK THE RULES.

It was the year 1920, the first world war ended and the panic of a new beginning bounced off the human heads. They should feel something like when you lose your wallet forever, and with it the money, documents, notes, bills, everything. After spending a while taking a shit on every god, you stop to think "now what"... And you start to develop a way of proceeding. With this in mind "And now how will we organize?" an unprecedented artistic movement arises, especially since its motto was basically this: unprecedented. Dadaism. 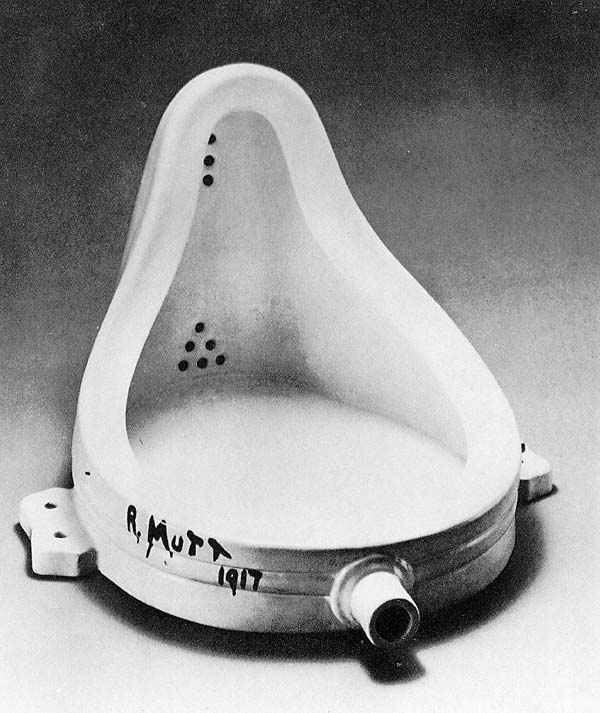 This artistic work of Marcel Duchamp responds to the uncertainty of that new beginning, it is something like "if order and reason led us to this (world war, social chaos, panic, death, insecurity), then perhaps we should see what is on the other side, what is there in disorder and instinct?"

That's how he came up with his source. In a very subtle way, Duchamp is telling us: "question everything, nothing is what it seems, and you can show it at your whim". What is this? a flipped urinal or a fountain? It is both, none and only one of them. First, yes, it is a urinal turned into a fountain for an artistic work. Then, it's not even an artistic work, just a silly image you found in a Steemit publication THAT YOU MIGHT BE ASKING "HOW THE FUCK DID I END UP IN HERE". Finally, if I had to urinate somewhere, it would be in that magnificent artistic work.

Dadaism is the perfect example of what can happen when people start to question things like "well, I have to make quality publications for Steemit... but what is Steemit? What is quality? What is a publication?" When the foundations on which the mechanism of social networks that we know today are being questioned, when we shake them hard to see what they are made of, I have no doubt, all kinds of possibilities open up.

There will also be people with zero talent and practice to publish their shits for believing that anyone can reach the trending page with whatever nonsense they publish (sounds familiar?). But we know that wont be the case, because people will not be thinking about voting anymore for the reward pool, they will be thinking about which publications should continue on Steemit.

It is said that Dada was the avant-garde artistic movement that forever changed the trends of the twentieth century. They were born from an improvised meeting with a fairly clear premise: "Dada was a movement that wanted to fuse life and art using irrationality and provocation as glue"

Questions in life can be fun.
Cow can cryptocurrency contribute to democracy?
A lesson I learned from a dream.
Quality vs Promoted content.
Appointment #1.
Self steem is not about being a jerk.
Pessimistic fashion.
New age issues.
Freedom.

What will happen when we have understood that the destiny of Steemit is, in a way, to revolutionize social networks, just as the cryptocurrency is destined to revolutionize our perspective of money?

Let me know your opinion in the comments! ("I am against everything and everyone" I.K. Bonset.dada)
Fuente

life steemit introduceyourself writing blog
2년 전 by aparanoide45
$1.94
52 votes
댓글 남기기 2
Authors get paid when people like you upvote their post.If you enjoyed what you read here, create your account today and start earning FREE STEEM!
STEEMKR.COM IS SPONSORED BY

Congratulations @aparanoide! You have completed some achievement on Steemit and have been rewarded with new badge(s) :

Congratulations! This post has been upvoted from the communal account, @minnowsupport, by aparanoide from the Minnow Support Project. It's a witness project run by aggroed, ausbitbank, teamsteem, theprophet0, someguy123, neoxian, followbtcnews, and netuoso. The goal is to help Steemit grow by supporting Minnows. Please find us at the Peace, Abundance, and Liberty Network (PALnet) Discord Channel. It's a completely public and open space to all members of the Steemit community who voluntarily choose to be there.