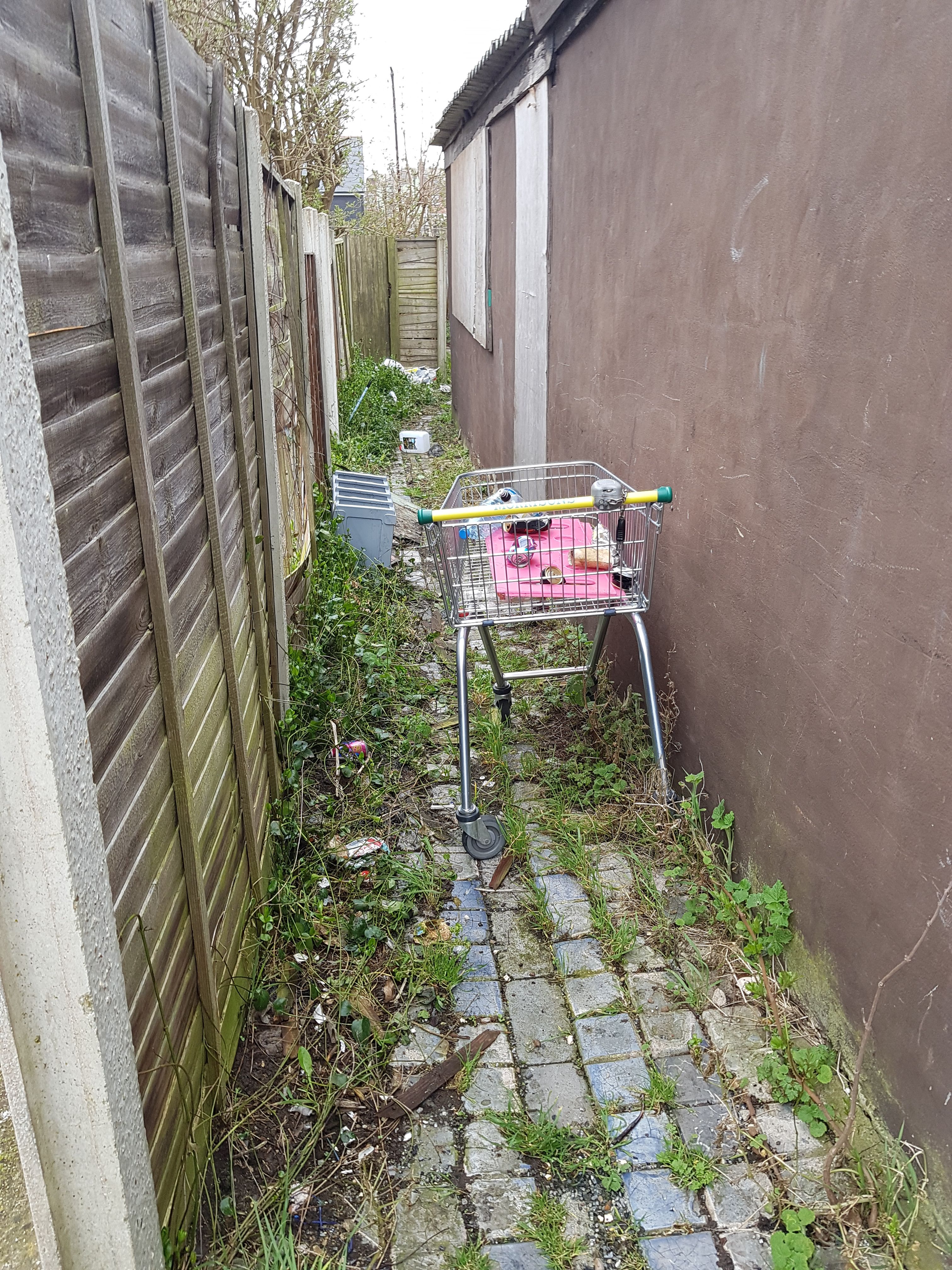 this is the end of the ally way before I started

How a good deed can make or brake you...

I'm just a simple Bongy man, my head is a bong and I have big issues, my anxieties don't just have anxieties they have
two disorder's that I know of and have been diagnosed with, Generalized anxiety disorder and avoidance personality disorder, In basic terms extreme anxiety and a tendency to go full on Agoraphobic. I also recently got diagnosed with PTSD, I kinda already knew I had it but I didn't want to look it up and over think my hole life and make myself worse.

PTSD from the little I knew involved flashbacks and happens to solders having to do inhuman shit or nearly got blown up and called a wiz-bang, in our army at least, shell-shock possibly in America. I started having flashbacks at about the age of twelve and non stop for years before I ever really understood what a flashback was in a way that I could understand. In simple wordy words a flashback is a reoccurring memory that has just been "unlocked" and brings back the emotion and sensory memories, like sound taste touch smell as If every time is like re-livening the trauma as if it was happening all over again.

In learning about PTSD I have learned that I get triggered and this takes me outta my "window of tolerance" and "optimal arousal ( I'm not making this shit up this is the proper terminology) This then peaks my emotions and I can get super happy, morbidly depressed or really fucking angry ect... this is also called "hyper-arousal" This burst of emotion sets of my heads default protection and I go down past the "window of tolerance" to Hypo- arousal and complete numbness, completely void of all emotion, empty, dead to the world.

The key is learning you're triggers as best you can and doing exactly what you have been avoiding and trying to stop the arousal cycle by self soothing during the trigger, at the peak or anytime before the peak and and before the inevitable drop to numbness. also you can break the cycle at the hypo-arousal (numbness) by using a "grounding technique"the key is seeing it happen and acting and getting to optimal arousal and the window of tolerance.

So one thing I like to do to battle my demons is too keep active as much as possible, and a good one that makes the rl outside world easier is doing good deeds. So I found a trigger, the back ally way behind our house is a health hazard. Its a trigger for me because I have empathy for the surrounding houses, the old and the young that have just stopped using the ally way because of how overgrown it has become, the large bits of crap people have dumped and the whole town is ignoring. It also pisses me off how shit and corrupt the system is that people have to do this as they have no transport and no money to pay to have this stuff removed properly. I'm no conspiracy nut, I research this shit to the point I'm listening to the voices telling me to paint the whole town black or the voice that says to burn the corruption and take photographs because fire is beautiful, or to protest this shit like anyone is not too busy believing the lies and working the rat race till death.

So the ally way need to be sorted and I thought to myself f**k it, I'm gonna stew on this BS, or I can sort the problem out vigilante style,
and I did exactly that. This cost me about 2 hours of my time a few bags and I got shouted out and triggered then, once I explained what I was doing and that the rubbish I'd been staking they said sorry and thanked me. also I got triggered by family drama as soon as I finished clearing broken glass brambles, wood, bits of a bed some other randomness and a trolley.

So maybe nice guys do finish last and it's probably true in most cases that it may seem that no good deed goes unpunished, my motto is the world has enough hate fu*k that I'm going to keep doing this regardless. maybe If the word just did normal things to help everyone else and just one person can make a difference. Even just one act of human compassion from each person can make this nasty inhuman planet that the rich people are destroying could be a better place for all life. All life matters and even if you're the predator eating the pray you have no more right to live on this planet. 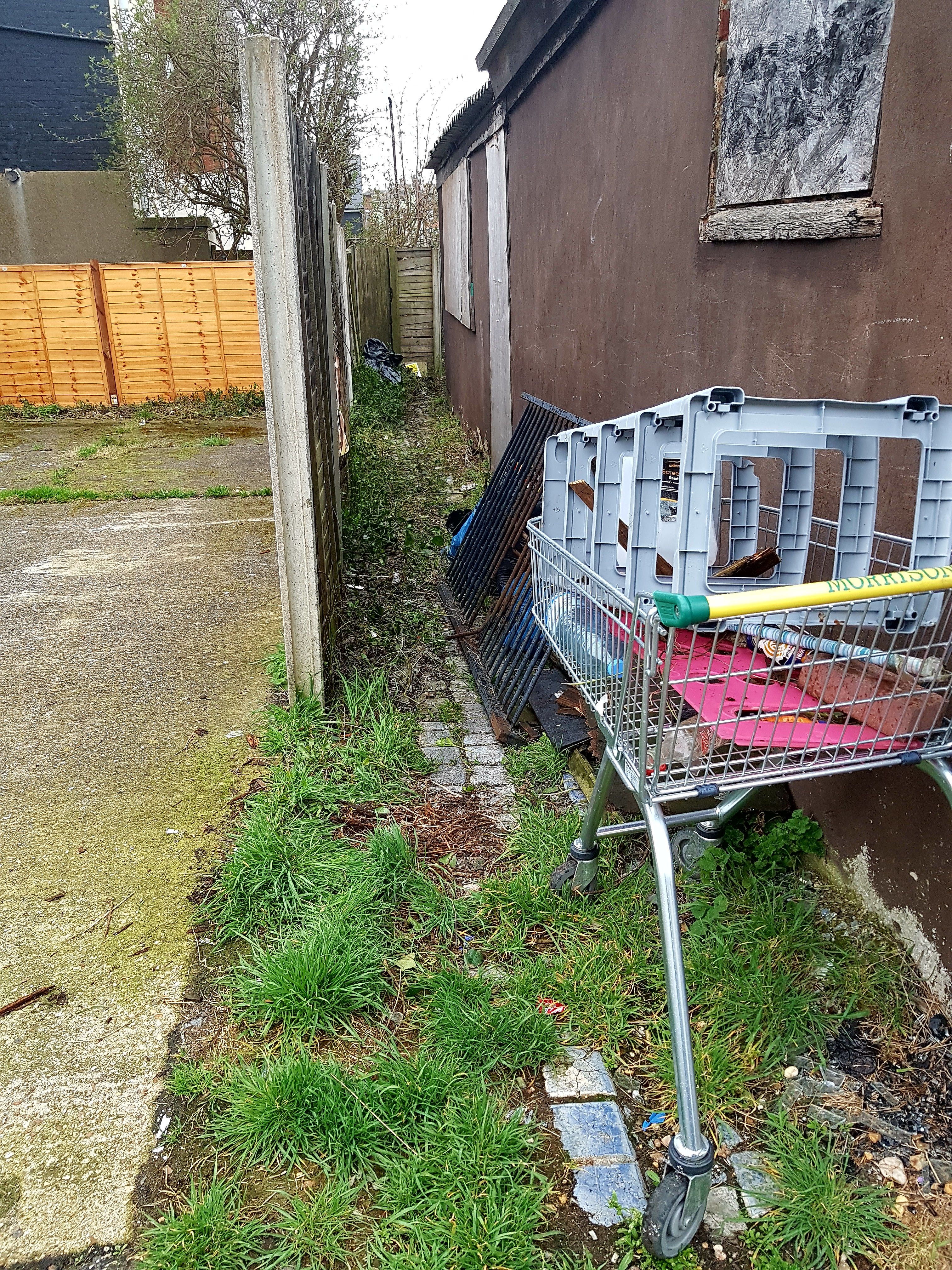 This is everything all stacked up from the clearing and now it's open for the two rows of houses that share the ally.

life smartphonephotography family blog funny
2년 전 by mrbong41
$5.93
35 votes
댓글 남기기 16
Authors get paid when people like you upvote their post.If you enjoyed what you read here, create your account today and start earning FREE STEEM!
STEEMKR.COM IS SPONSORED BY

While I don't suffer from PTSD, my dad does. I deal with manic-depressive bipolar - fun stuff (not). So while I may not be able to relate on the same level, I do understand a lot about mental illness and the various conditions that a lot of us struggle with.

Thanks for sharing your story openly and honestly - that's what life's all about, and it's how we grow as humans!

Man you're an inspiration too me the stuff you are doing in @gamersunited is above and beyond. Thank you for all the support and advice. sorry to hear that man, any mental health issue can take over your life and for people like us we need to learn to live with it and tools we can use to make this more possible.
Fire and destruction to all the corruptions.

Congratulations @mrbong! You have completed some achievement on Steemit and have been rewarded with new badge(s) :

Aw yeah! I too know PTSD all too well. And i can tell you form my 10 plus years dealing with it that being neat, organized and clean helps A LOT. Less anxiety. Did you get a chance to listen to last night's podcast. It's all about EFT and PTSD.

yea man it took me awhile to realize that it wasn't on msp waves so I checked back in the post show post and managed to catch that part also, it was an amazing show, I wish I'd managed to find it quicker. I have been told about EFT, I am going to have to read about it and try using it. and yea clean and tidy is always good for mental health. thanks man.

Every show is archived immediately after and posted on my blog.

YO, I RESPECT this my dude. You are working through issues but being productive and changing things for positive. You have a hard task. I completely understand all of this. MAD RESPECT from a person with PTSD/Anxiety, anger, depression.

Oh shit man, no doubt, fuck mental health, right!? You know it man, just doing what I can, I even respect my neighbors but they are nasty going the stuff that I found haha, piss jugz everywhere...
Thanks fo the support grimm mad respect fo you bro.

It seems like US who want to change the world have the hardest go of just being to start with. It is like forces want to hold us down. STAY TRUE. YOU ARE NOT ALONE. RESPECT

wow this is an immensely compelling story. love the photos! hands a shovel to hit the demons on da head

Thanks @torico, what an amazing comment and shovel you have bestowed upon me. hits the demons in da head Ahh that's much better, spank you very much.

I thought you were awesome before, but you made me melt after reading this! You're a brave, wonderful, and all around just good person and I admire your courage. Amazing post from an amazing dude! Thank you for this 😘💞💞

Thanks @kristyyd you always have the best things to say and when we are all taking over PAL I'm dying everytime. thanks for the support hun.

Congratz, your post has been resteemed and, who knows, will maybe appear in the next edition of the #dailyspotlights (Click on my face if you want to know more about me...)
Please check this Breaking News!
$0.00
1 vote
댓글 남기기
[-]
photocontests348  ·  2년 전

Congratz, your post has been resteemed and, who knows, will maybe appear in the next edition of the #dailyspotlights (Click on my face if you want to know more about me...)
Please check the new rules of the Daily Spotlights!
$0.00
댓글 남기기