The Building That You Didn't Guess ;)

Today we are going to visit a very interesting building in Singapore. It’s Parkview Square located in Bugis area. Singaporeans have dubbed it the “Gotham Building” because its dark, imposing design looks like it’s been conceived in Batman’s Gotham City.

I first visited this place a few years ago for drinks at the lobby bar. What intrigued me the most, is the fact that this building seemed rather out of place. It’s so sombre and opulent that I thought it only belonged in another era, a difference country. Looking around, you could feel the total devotion, an enormous sense of pride and perhaps even some self-indulgence (i say this with the utmost respect and envy) of its architects and designers, under a no-expense-is-spared commission of their visionary client, the late Mr. C. S. Hwang, founder and chairman of Chyau Fwu Group. 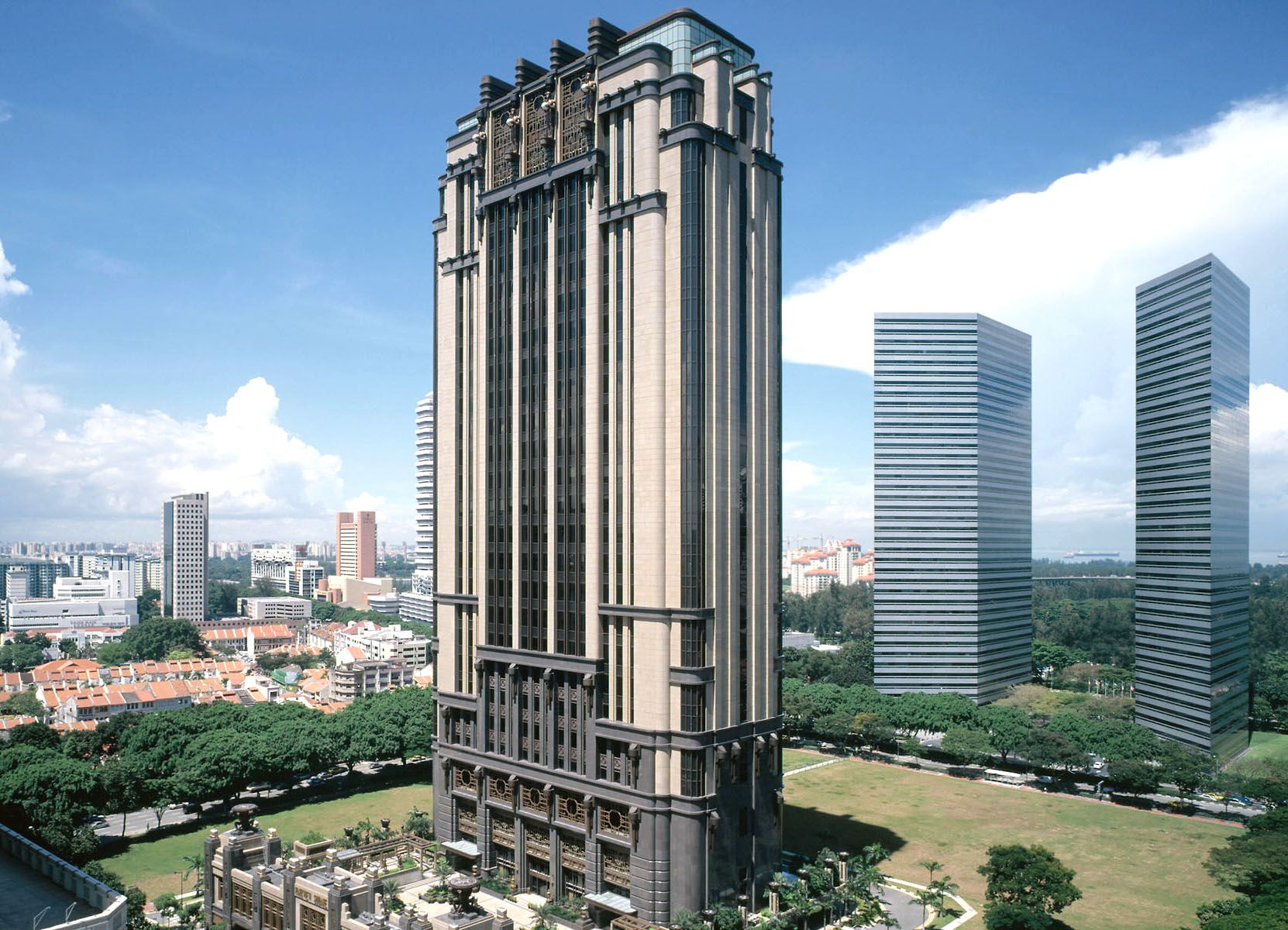 Unlike many contemporary office buildings that emphasize the application of steel and glass in minimalistic fashion, Parkview Square (Year 2002) was built in the classic Art Deco* style, similar to the Chanin Building (Year 1929) in New York. The facade of this building is mostly clad in brown granite, bronze and lacquer.

(* Art Deco is a style of visual arts, architecture and design that first appeared in France just before World War I. It combined modernist styles with fine craftsmanship and rich materials. Influenced by bold geometric forms and bright colors of the art movement then, it often draws inspiration from the exotic art of ancient China, Japan, India, Persia, Egypt and Maya.) 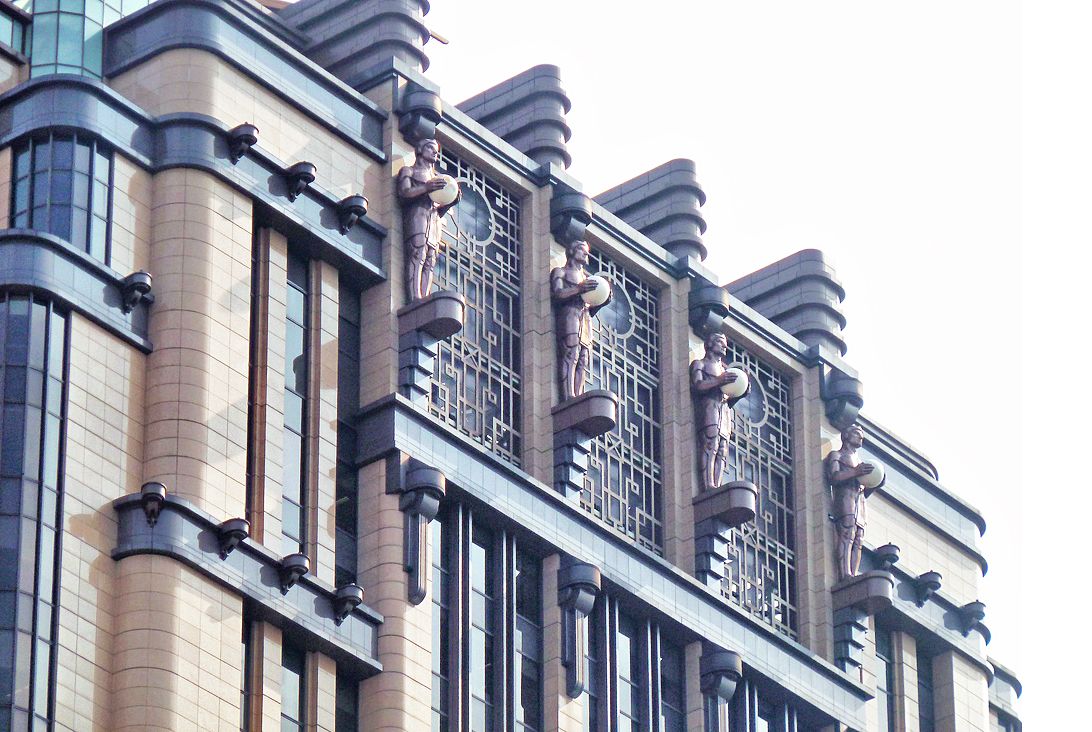 There are many statues and sculptures both outside and inside the building, here I will only highlight the more prominent ones. Let’s start from the top (shown in the above photo.) Actually, there is a story/urban myth behind these statues sitting atop the building which can hardly be seen from the ground level. If you take a look at the first photo in this post again, you will notice there are 2 diamond-shape buildings behind Parkview Square, which are The Gateway (Year 1990) designed by the world renowned architect I.M. Pei. (I’m a huge I.M. Pei fan, too. He just turned 100yr old this April!) However, many local Feng Shui masters speculate that the design of The Gateway is considered "bad luck" for any other buildings to be near it, because of its dagger-like appearance. People believe that it would "cut through” all the other buildings, and the tenant companies in their building will be doomed to fail (“cut to pieces".)

So for many years, the area around The Gateway remained undeveloped. That is, until 2002.

In 2002, Park View Square was built, and it was specially designed in the classic Art Deco style to protect itself from the "daggers" of Gateway. The 8 gigantic statues of men holding a light ball in their hands, 4 of them standing on each broad side of the building's crown, were crafted to "guard" Parkview Square against “bad luck.” Believe it or not, this story does show you that it’s not uncommon among Chinese property developers to consult their trusted Feng Shui masters before committing to a project. This photo is taken by me, so is the next one.

Now we have come to the ground level. Standing in the center of the plaza, facing the main building, you could see there is a statue of a golden crane with its head lifted, pointing towards the direction of mainland China. On the pedestal, a Chinese poem is written: 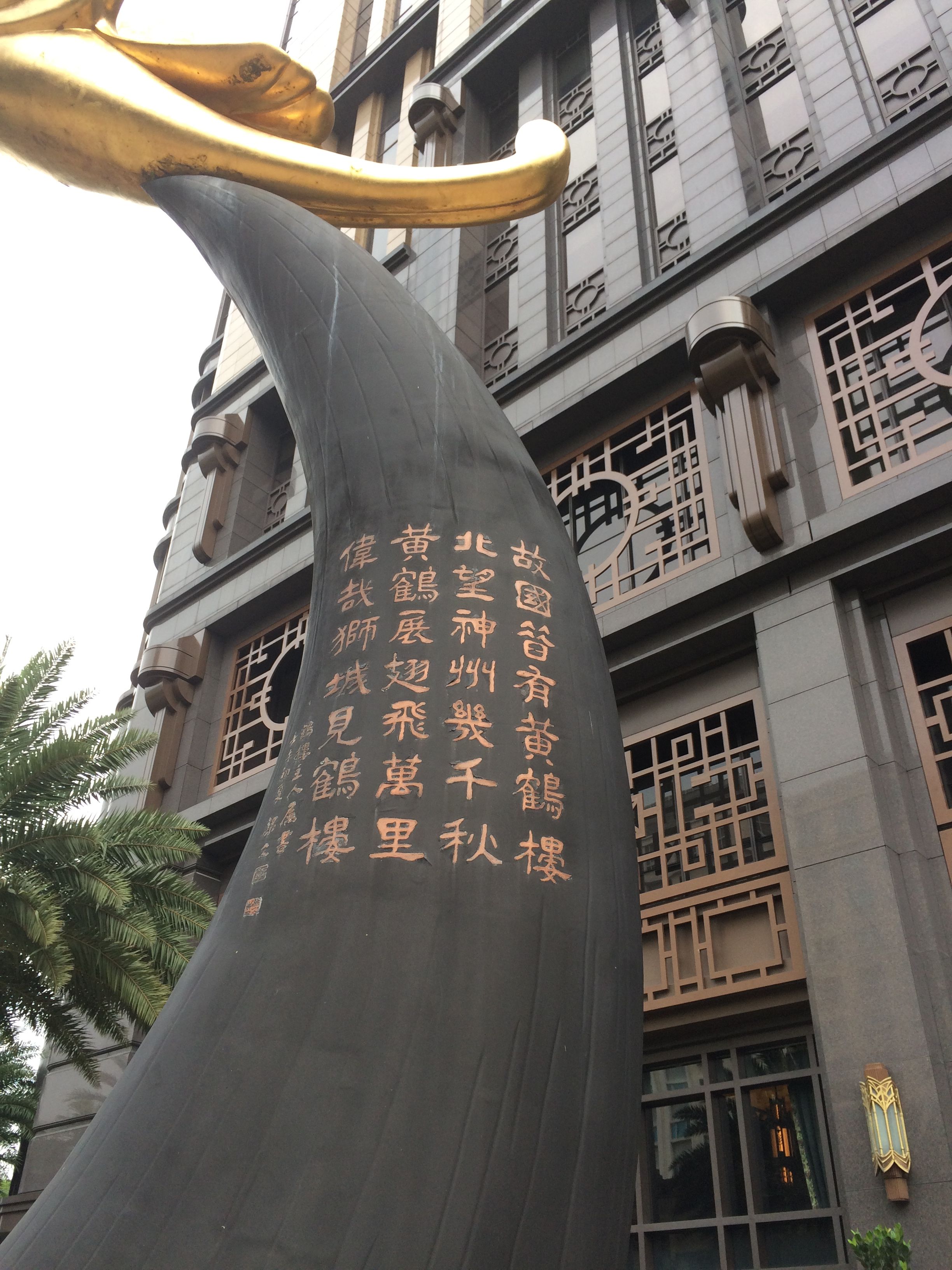 故国旧有黄鹤楼 There is a Yellow Crane Tower in my homeland,
北望神州几千秋 Looking in the North direction (towards China) for many years,
黄鹤展翅飞万里 Yellow Crane spreads its wings to fly tens of thousands of miles,
伟哉狮城见鹤楼 The great Lion City (Singapore) sees this Yellow Crane Tower.

Pardon my plain and literal translation of this poem. It was composed by the late Mr. C. S. Hwang himself. This is the most personal and meaningful art piece at Parkview Square because of Mr. Hwang’s life experience. He was born in Teochew, China in 1926. During the Second Sino-Japanese War (1937-1945) he joined the Kuomintang/Nationalist Party (as opposed to the Communist Party) army as a reporter. After the Japanese surrendered in 1945, and the Communist Party won the Chinese Civil War in 1949, he retreated to Taiwan along with the Kuomintang army. While in Taiwan, Mr. Hwang started a construction business that became very successful, and he had since established himself as an influential property developer in Taiwan, Hong Kong, mainland China, France and Singapore. His company earned a reputation for top-end landmark projects that set new benchmarks for quality and innovation.

For someone who traveled extensively and lived in different countries, Mr. Hwang always had a longing for his hometown in China. This poem expresses his feelings deeply. Parkview Square was his final project, as he passed away 2 years later in 2004. (Image source: Andrew Boyd, flickr.com) These are the bronze statues on both sides of the plaza. From left to right: Sun Yat-sen, Churchill, Lincoln, Plato. There are another 4 which are not shown here, they are Dante, Dali, Newton, and Chopin.

Mr. Hwang (and his eldest son George Wong’s) love for Dali’s art is quite evident as there are 2 sculptures by the Surrealist artist installed in the garden, and another 4 in the lobby. They’re part of George Wong’s personal collection. I like Dali's paintings much more than his sculptures, to be honest. Because they are way more imaginative, expressive and magical. 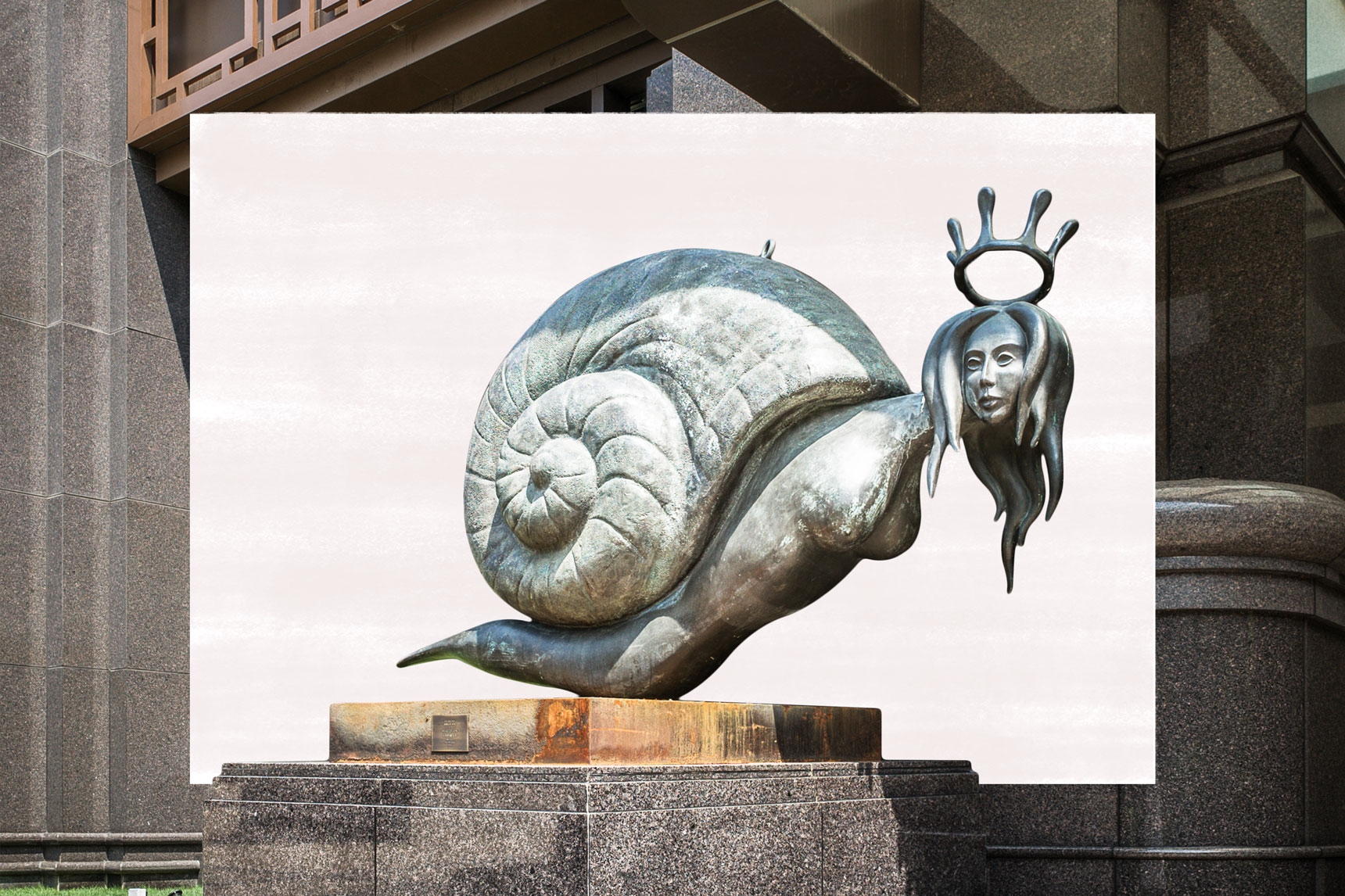 Snail Queen (1974), by Salvador Dali. Bronze, 180 x 290 x 87cm. (Image: tsingapore.com ) I quite like how they digitally added a giant canvas behind to showcase each piece, eliminating background distraction. 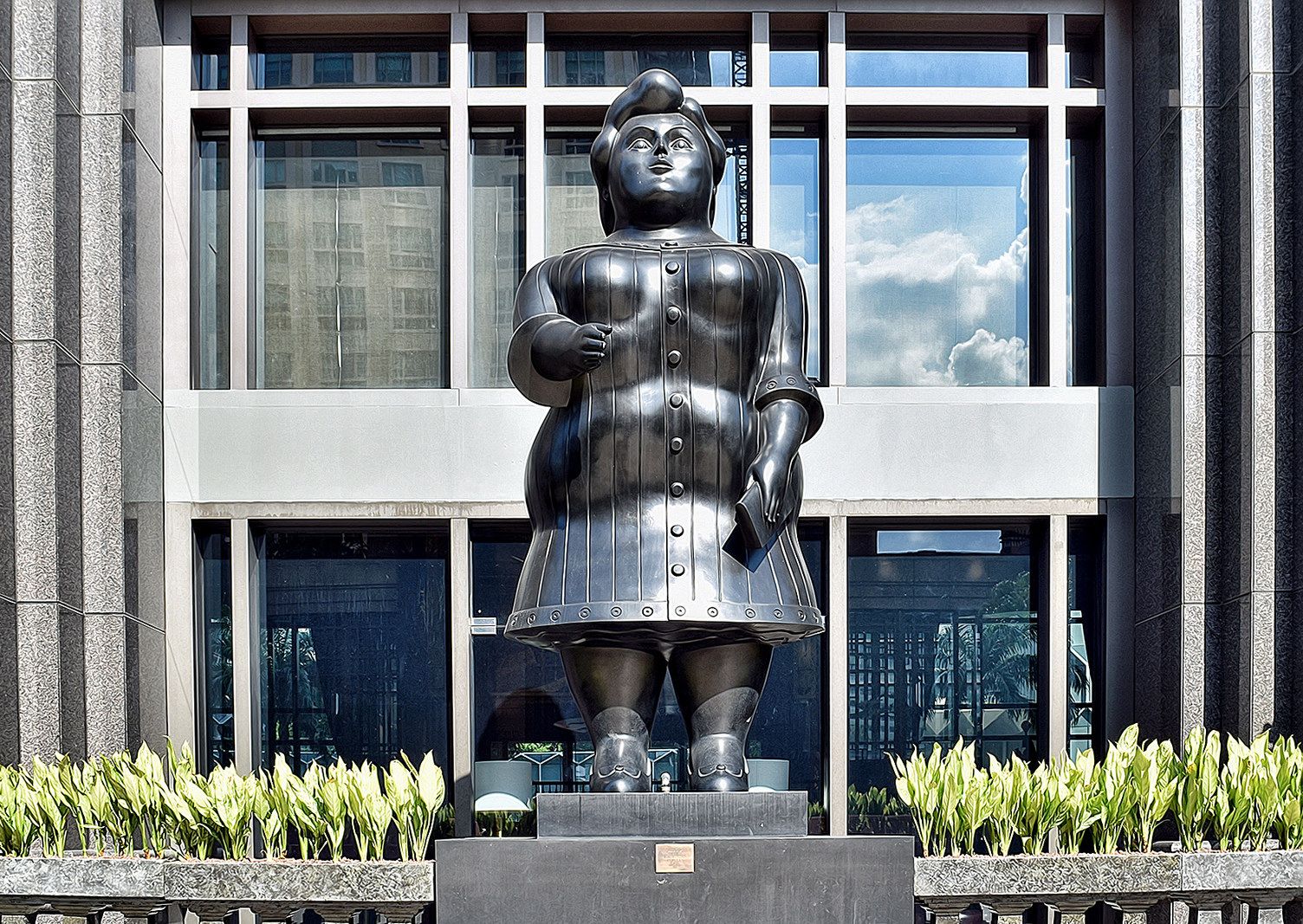 There is also a sculpture by Fernando Botero, Dressed Woman. (Image: Choo Yut Shing, flickr.com) It's always pleasant to look at Botero's distinctive voluptuous sculptures because in reality most people are attracted to slim bodies. There is another sculpture by Botero (titled Bird) in Singapore as public art, it's installed outside UOB building along Boat Quay.

Ok, it’s time to go inside for a drink now! The newly renovated Atlas Bar is known for its very special champagne and gin collection, and it’s helmed by one of Europe’s leading bartenders, Roman Foltan, who previously worked at Artesian at The Langham, which is voted the World’s Best Bar four times consecutively.

My friends and I had enjoyed the cocktails very much, even though i usually prefer plain alcohol served as it is, or maybe just add water/ice. 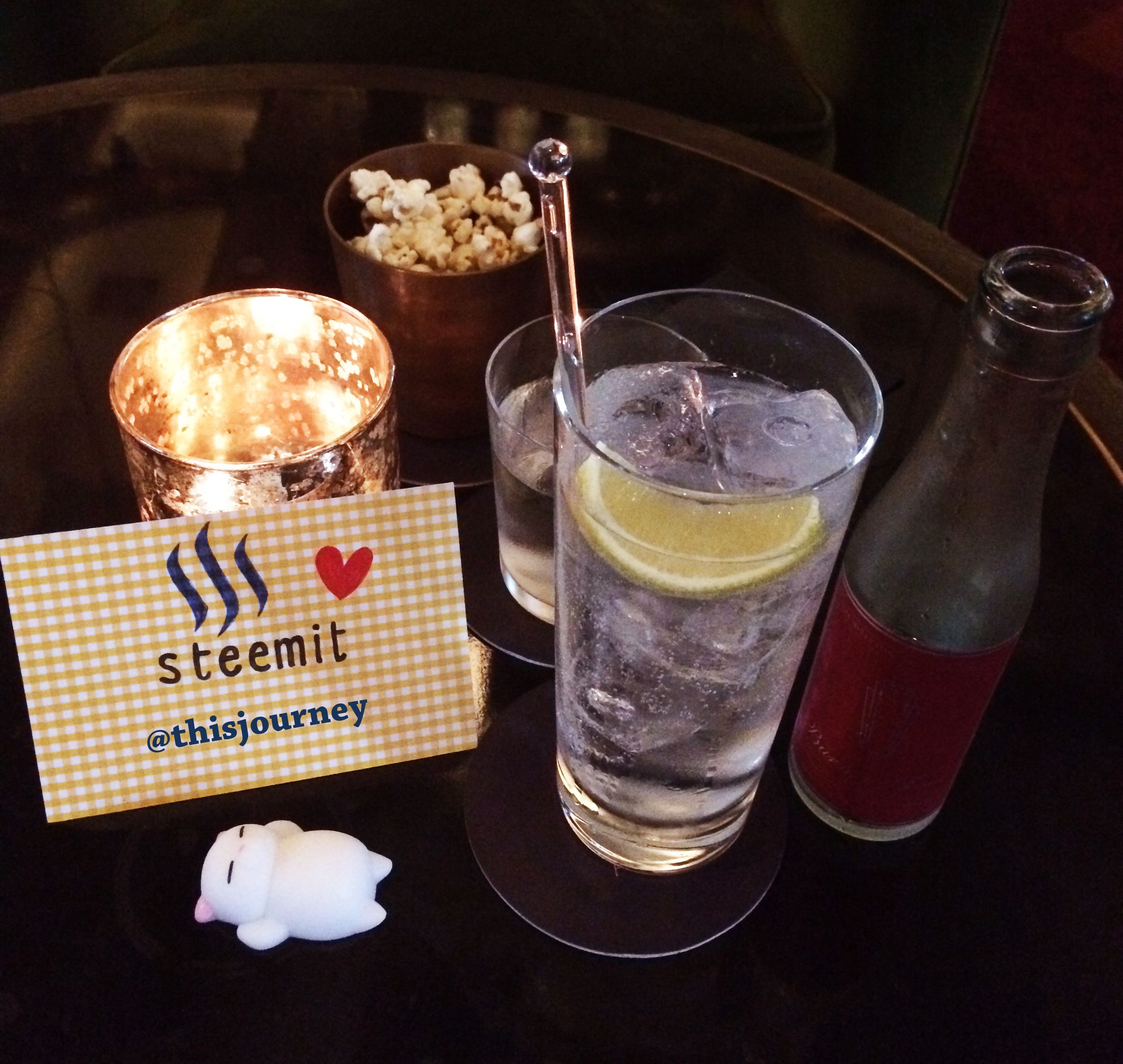 The bar on one side of the lobby. They used to have a pianist and singer performing on top occasionally. 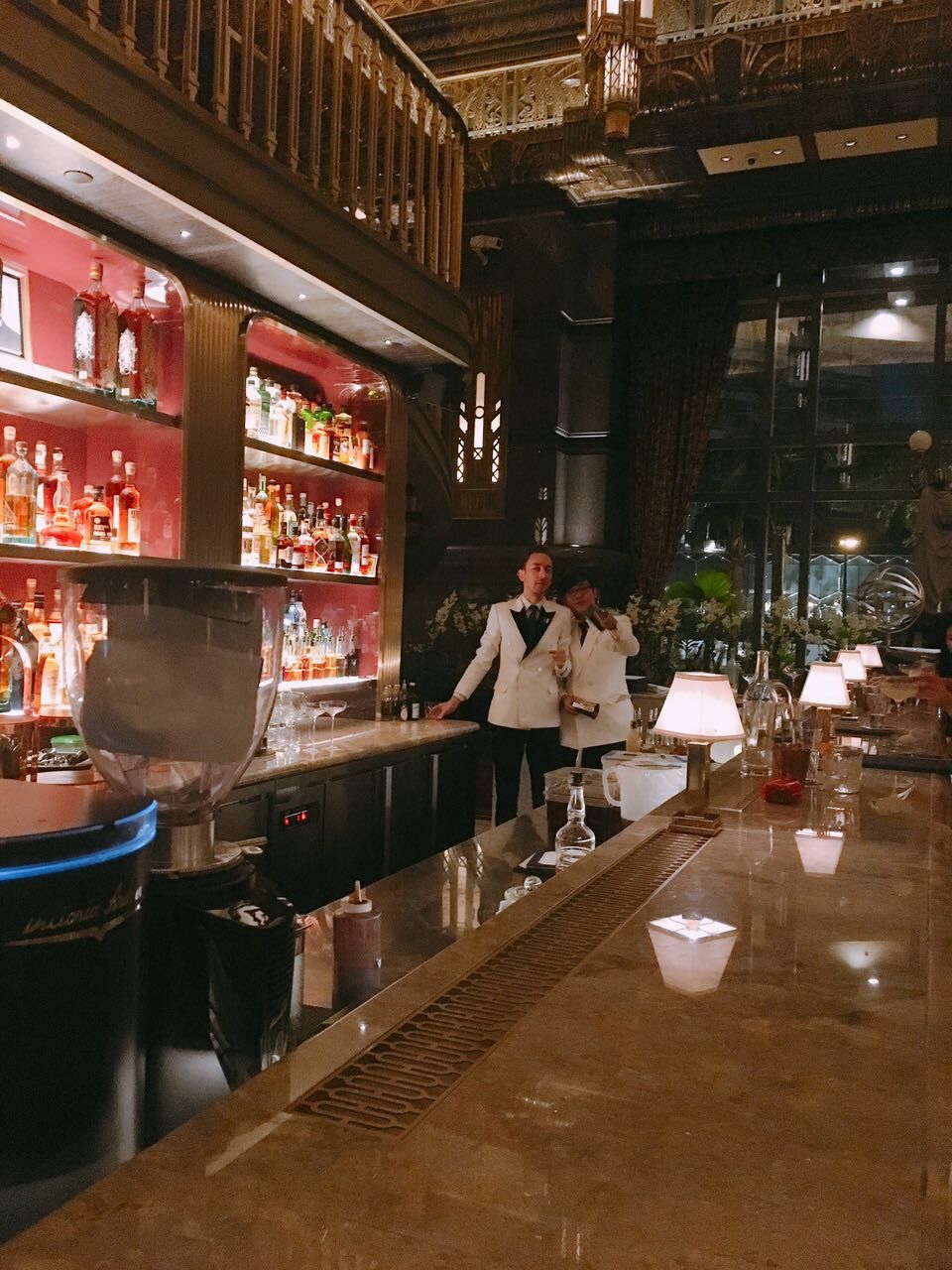 This photo is taken by my bestie Lipsy when we went there for drinks, so are the next few. The gin tower over the other side of the lobby. It houses over 1,000 bottles of gin and champagne. One of the main stars from the collection is the legendary 1907 Heidsieck & Co. Monopole “Gout American”. This particular bottle of champagne was salvaged in 1998 from a ship called The Jonkoping off the coast of Finalnd, where it was torpedoed by a German submarine in 1916 while was en route to the Russian Imperial Army in St Petersburg. It went up for auction and was purchased at a whooping $275,000. Yes I am very curious how a 100yr old champagne would taste like, but doubt anyone would actually drink it... 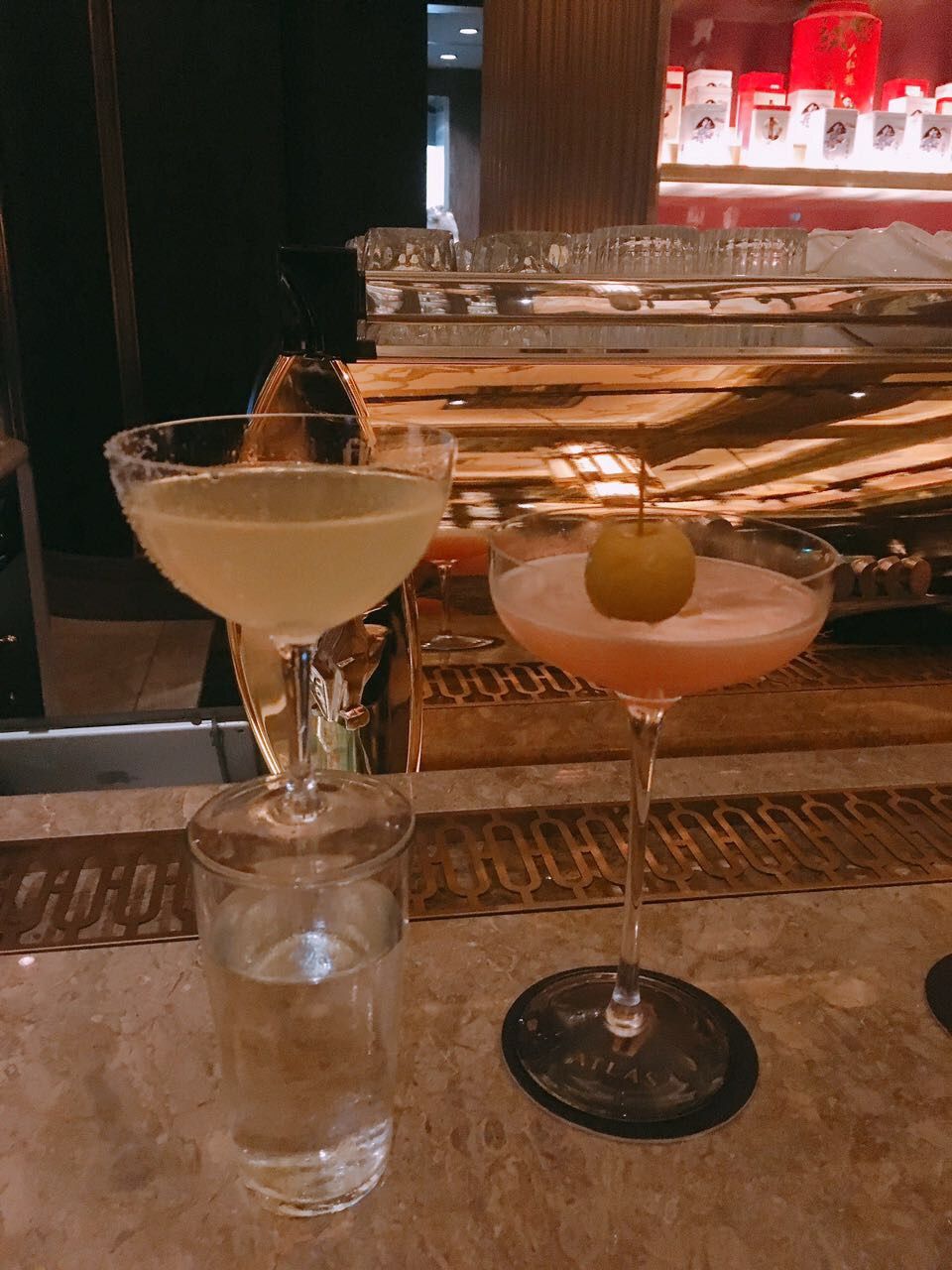 P.S. Didn't expect myself to write such a long article. I quite enjoyed it though, and would like to dedicate this post to @nnnhhh. :D

life architecture travel singapore art
4년 전 by thisjourney49
$6.19
113 votes
댓글 남기기 33
Authors get paid when people like you upvote their post.If you enjoyed what you read here, create your account today and start earning FREE STEEM!
STEEMKR.COM IS SPONSORED BY

incredible! i wouldn't have been able to guess this, anyway. since i've never been here. it's funny that i've lived in singapore for over 20 years but never took notice of this building.

the yellow crane sculpture, along with the poem, is magnificent! and the architecture is indeed beautiful and not reminiscent of the usual "singapore style".

i'm definintely heading over to the bar with friends the next time i get the chance to. looks pricey, but i'd feel like a real baller drinking at a place like this :p

Hahaha yes it's worth it because you can feel the quality of their service. The place is cozy and relatively quiet, perfect for having a nice chat with someone you enjoy hanging out with. Generally speaking, alcohol in sg is pricy.. so are cars and tobacco and many other things due to tax and duties. :(

you're right. that's why i'm ever thankful that i'm able to live comfortably in this expensive city! also another reason why i drive to jb for cheap food and petrol :p

Wow what a beautiful and amazing building! I will go the place you plan too. Good post.

That is a very beautiful building. I love the look of that lobby/bar. Gorgeous. Thank you for sharing those pictures.

thank you very much! I'm so glad that you enjoy it! <3

What an amazing building, and a great post. I've never seen the Snail Queen (1974), by Salvador Dali until your post- what is even stranger is that I've posted a story today about a Snail Queen!

ive heard of this !

Hahahaha perhaps this is what Carl Jung would call 'a synchronicity'!

Thank you so much Ophelia! I enjoyed your The Girl who Sings to Snails too! The snail queen is Lucy! What a lovely story! <3

Yeah the out look of the building surely looks like it is from the 80s but viewing it closely and how you describe it,it should be wonderful .Probabaly even nicer and fashionable than some of the modern designs.By the way i like your write up and would like to follow for more

Thank you so much for your kind compliments! Glad that you enjoy this post, I will write more!

Wow Such a great building and great post about it. Would love to visit it one day, reminds me of the The Great Gatsby One of my favourite films!

Yes totally!!! I should've mentioned it! I love The Great Gatsby too! The roaring 1920s and American dream, the original YOLO and FOMO ! lol

You managed to visit very good places! Lucky you !"

Hahaha.
forgive me sister I will be friends with you

oh my god
This post is really ok
I love it

This is out of this world. It look like it was never build by hands. So accurate and stylist architect. Looks are like it was mounded. So cute

Wow what a AMAZING PLACE !

-Excellent post thanks for sharing
I am a new steemians, maybe i should study first with you, regards know me
https://steemit.com/@movietrailar please follow me
I followed and upvoted.Would you like to follow and upvote me.

Hay @thisjourney nice post
I always follow your journey whether it is Travel or Other !!
I Wish You Would Also Follow and Upvote My Post @funnystuff
Really I Liked What You Do Every Day
And Always Join - Upvote - Comment and Reesteem
I wish the same
Thank You Sweet