Never imagined I would think of pussies while eating (dinner)! 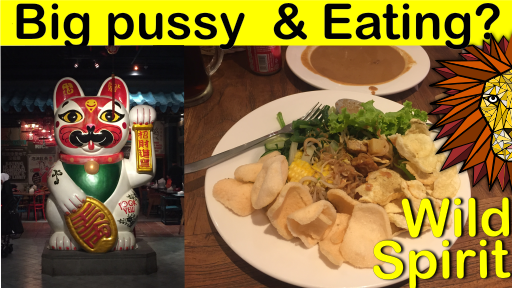 Literally, that is what I was thinking as I roamed hungry in a mall in Jakarta at 5 PM today.

After being busy for the last 3 days for the prayer meeting in the memory of a loved one and other ceremonies at home, shaken to the core once again with contagious grief from all my relatives, life whisked me away and brought me to Indonesia for couple of days.

I arrived in Jakarta late last night, virtually in the dark and saw nothing of my surroundings except my hotel room. Immersing myself in work, I worked till early hours of the morning, grabbed a bit of a shut-eye and went straight for my meetings (without even having breakfast). After going strong through the day, lost in lively discussions, I did not miss food. However, when I finished and came out, my stomach was growling loudly enough to be heard a few block away!

"When was the last time when I had eaten?" I wondered in a daze. "Food, food, I need to get some food". My brain was listening only to my growling stomach and had stopped taking all other logical inputs. So I ended up walking in to the first mall that I saw and went looking for food.

Don't even ask me the name of the mall because I do not remember!

After a few attempts at seeking understandable directions and wondering if "Satu" meant one and "Tigga" meant three or four, I finally decided to just walk on every floor of the mall and try to find any place that would serve food.

Luck had long abandoned me because, added to the herculean task of trying to find a place that served food, was the task of finding 'Vegetarian food' (I am a vegetarian on Tuesdays - by HQ orders and she does not like it when I break rules!!)

Here is the result of my travails and my culinary journey today!!

No - I am not calling names or saying bad words. This was really the name of the restaurant. Even in that state of food deprivation, I smiled.. And to top it off, there was this giant pussy at the entrance of the restaurant! Oh yes - I know. That is supposed to be lucky and welcoming cat but my twisted brain, in a food deprived state, was making crazy connections between pussy and eating.... I shook weird images off from my brain with a shake of my head and carried on. 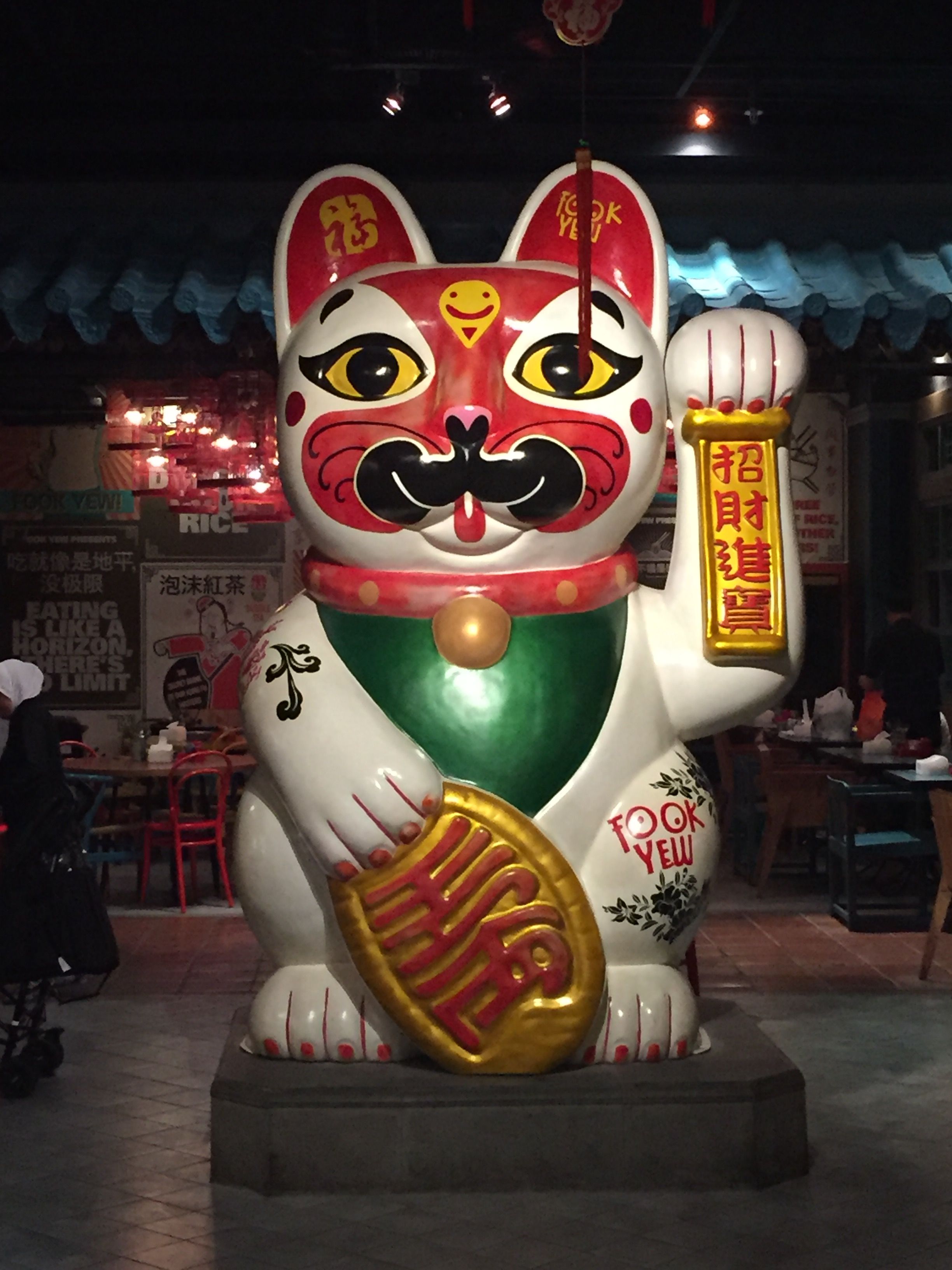 The Fook Yew, unfortunately, did not have any vegetarian dishes on menu. I mean, they had dishes which apparently were vegetarian but they either looked ugly to me or suspicious... Again - I am not blaming the restaurant. It is perhaps a very fine restaurant but my paranoia kicks in sometimes unexpectedly about what I eat.

First pussy and then COWs??

These restaurants seem to have a penchant for big animal statues. I was rapidly putting as much distance between me and the big pussy. Strolling rapidly while scanning my surrounding for a hint of vegetarian food, I almost bumped into this cow that was guarding the entrance of yet another fine restaurant. Scared of the weird connections my mind may make with cows and food again, I did not even glance at the restaurant and moved on!

As I gasped with hunger pangs, with my legs feeling like made of lead, I trudged on. I had almost given up hope when I saw this place advertising the traditional Indonesian dish, Gado-Gado!

Wow - NOTHING felt so good. It was promised to be vegetarian and a quick google search showed that it was supposed to be a delight, along with sweet peanut sauce!!

I did not need a second invitation. I barged in, thumped the table and shouted GADO-GADO, NO MEAT, FAST FAST!!

Here is the piece of heaven that arrived a short few minutes later. I almost put my mouth to it directly, like a dog, but somehow, restrained myself and used the spoon to eat. 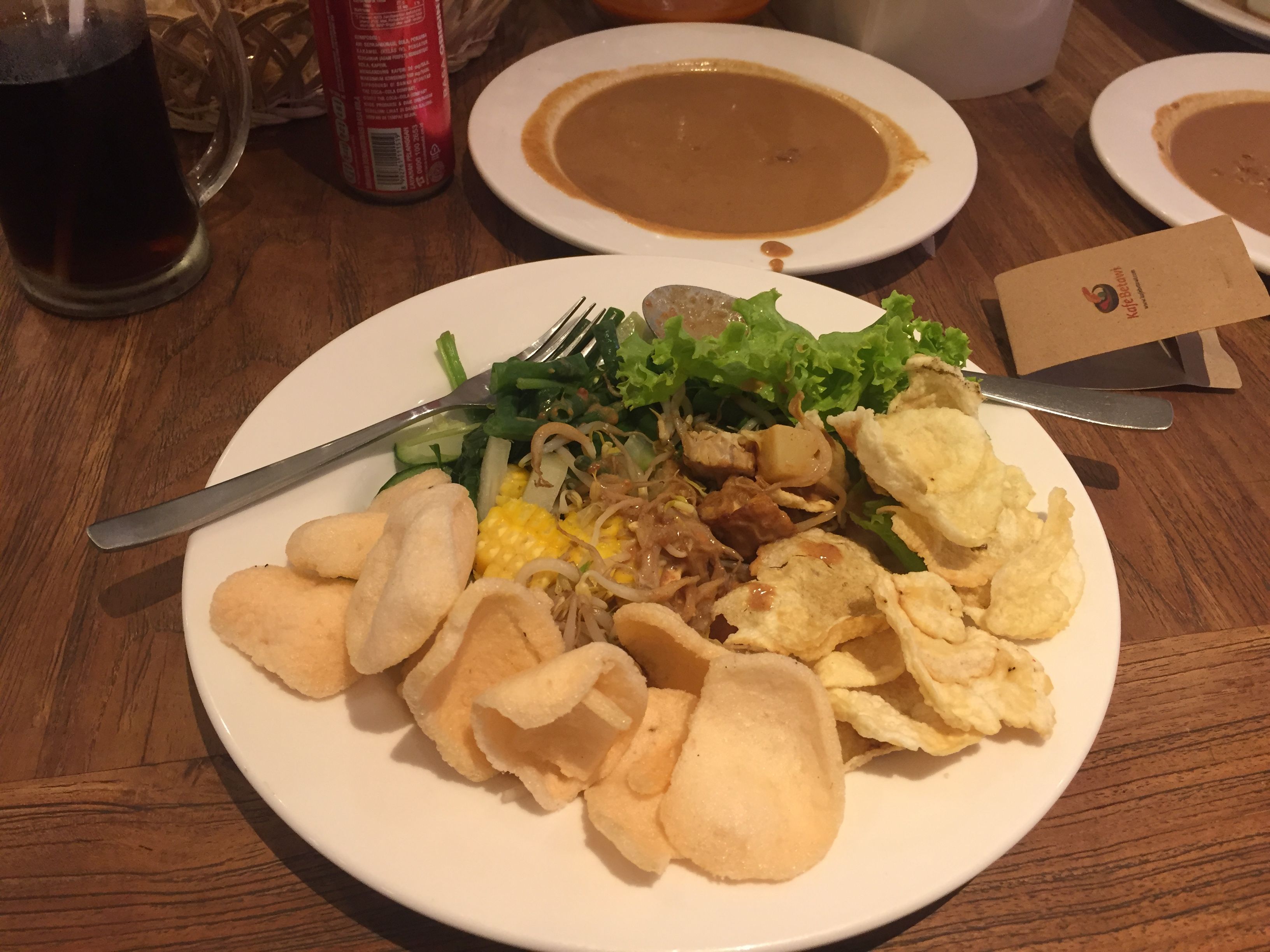 A sort of salad with sprouted beans, lettuce, some tofu and some unidentified leafy vegetable, it tasted divine along with the peanut sauce.

Steemians, please comment freely to share your experiences, knowledge and views about Gado-Gado and Indonesian food culture. Thanks.

Gif crafted by the Legendary @stellabelle for me based on my Lion Avatar
life food funny thealliance travel
3년 전 by vm290464
$109.91
349 votes
댓글 남기기 28
Authors get paid when people like you upvote their post.If you enjoyed what you read here, create your account today and start earning FREE STEEM!
STEEMKR.COM IS SPONSORED BY

Oh damn, I can't even Imagine being so hungry. Good to know gado-gado saved the day for you.

This is funny. Your choice of words though "luck has long abandoned you" hehehe but it took you to a restaurant with pussy and giant cow. Good to know you got a good meal out if it and didn't break your rule of being a vegetarian on tuesdays.

Lol, some what weird and fun

Fook you! Lmao.
I just smoked some crack; reading this post, it felt like I was there with you! Dodging giant animals just to stumble into the most badass place, finding exactly what you were searching for — amazing.

Gado Gado is amazing! Almost as good as Nasi Goreng imo :) I never thought of peanut sauce as a salad dressing until I had Gado Gado. glad you enjoyed it :)

Haha.. It was really funny specially conclusion.. Haha dnt wry about big pussy.. I love the content and way you write it.. I was worried about your apetite and hunger 1st.. Haha There are two kinds of pussys

i love gado gado! thanks for sharing :D

Congratulations @vm2904! You have completed the following achievement on the Steem blockchain and have been rewarded with new badge(s) :

Hey, I wanted to connect with you. Sent you a message on Discord, can u please check

Psssttt. I think they are the culprit you are looking for.