$$$ RIP THIS MARKETS FACE OFF 100% FOR FREE. Click here: https://www.traderschoice.net/
Into Crypto's? The free charts on my website of Steem, Bitcoin, Ripple, Ether, and Litecoin, are all LIVE 24-7. Click here: https://www.traderschoice.net/
PLEASE PAY IT FORWARD. This is an animal shelter which I personally support financially with monthly donations. Please adopt homeless pets. https://animalfoundation.com/

money stocks trading crypto bitcoin
4년 전 by marketreport72
$11.05
153 votes
댓글 남기기 102
Authors get paid when people like you upvote their post.If you enjoyed what you read here, create your account today and start earning FREE STEEM!
STEEMKR.COM IS SPONSORED BY

Thank you for constantly coming out with quality observations, I really appreciate it in my introduction to the trading environment. Keep it up.

The widespread lack of concern to today's move down is interesting nonetheless. At least it shows how well trained markets players have become. Said training represents a key ingredient in the eventual move down, whether this be it or not.

Today I was watching traders buy calls hand over fist with each downtick thinking they are getting the best deal ever, mind you, on the first real day of a down move - not a typically good strategy. What happened to waiting for the 3rd day or at least waiting at all?

exactly..And as a student of put/call ratios and other sentiment indicators for about 40 years..this is very bearish. I have called for a significant top last weak..

Hey Greg, I found out that Robinhood is setting up option trading with no trading fees. It is not live yet but coming very soon according to them. You may want to share this information with your followers if you have not already. What a great thing especially traders starting out to avoid fees to help maximize their profits.

I believe the Stock Market, and all other financial instruments sold off today on the news, that Congress voted on releasing the FISA memo. Plunge protection was activated by the Treasury Dept., to save the day. Tomorrow, or as early as after tonight's State Of The Union address, the markets will again surge upward! The markets always sell off on BIG news, before rebounding. Tonight, the POTUS, will talk about all the positive things that are going on, with respects to the economy. He will infuse even more confidence into the American people and American entrepreneurs.
I don't believe he will speak about the FISA Memo tonight, but when it's released to the public, the markets will tank again, at least for the short term.

Yes good point. I agree. The money has to go somewhere back into stocks we go. I think it was some profit taking for another great month of gains. With BABA earnings coming out on Thursday I think it a a great catalyst to help launch this market higher.

LOL.. you're killin' me! But words could not have been more truer than what you just emphatically said. I see exactly this happening as well. The markets will rip higher. It's a given considering how EVERYTHING pulled back, ready for the spring upwards.

Also, maybe people took their mandatory IRA distributions for 2018 and the cash won't be coming back....

Thanks again, Gregory, for your work and keeping us informed. Upvoted, Resteemed.

Cryptocurrencies are the way to go in the long run, some stocks too but once we are able to blend stocks to blockchain technology, and allow for 24/7 stock trading tied to blockchain with low fees...ouff will be a game changer

Not sure that would be a good idea. That would be how the big banks and hedge fund managers could get involved, and create a fake market, as is what is going on now in the markets. We don't want banks or governments involved, noimsay'n?

total opposite, everything will be public and out in the open

Yes! I have been thinking about the same. Just throw all the worlds stocks and bonds in one single blockchain.

The Local Coin Shop, down the street, has more fantastic deals than I can afford. So I only get a few.

Greg as always. You rock.
Could you, If you like make a video about diffrent crypto you like?
Exept Steem ofcourse. I think many would like it.

Money Heaven, sounds like a nice place to retire.

Thanks for the information.

Gold down again today. Who said it would be easy being your own central bank?! I guess I need that fractional reserve part.

The market is going through a good and healthy correction, that trend can continue for another week or so... I bought the VelocityShares Daily 2x VIX ST ETN (TVIX) last week, and it's up pretty good in a few days but I will sell it soon.

I don't think this sell-off is done yet, it can continue for awhile... in fact last week could have been the top, but only time will tell. All asset classes are in bubble territory, maybe they correct all at once... being in cash or shorting the market is not a bad idea, especially if this sell-off continues, which I suspect it will.

The market is experiencing a decent and sound rectification, that pattern can proceed for one more week or somewhere in the vicinity ... truth be told a week ago could have been the best, however the truth will surface eventually.
#Upvoted & #Resteemed for this day I saw your video @ grinman post. It looked so good 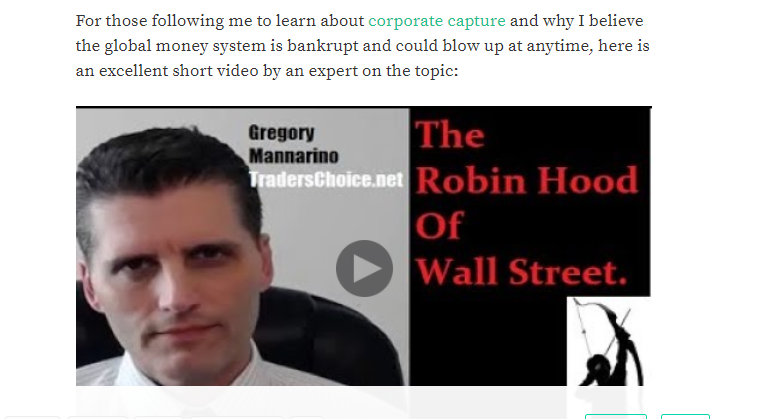 Thank you for your informastion 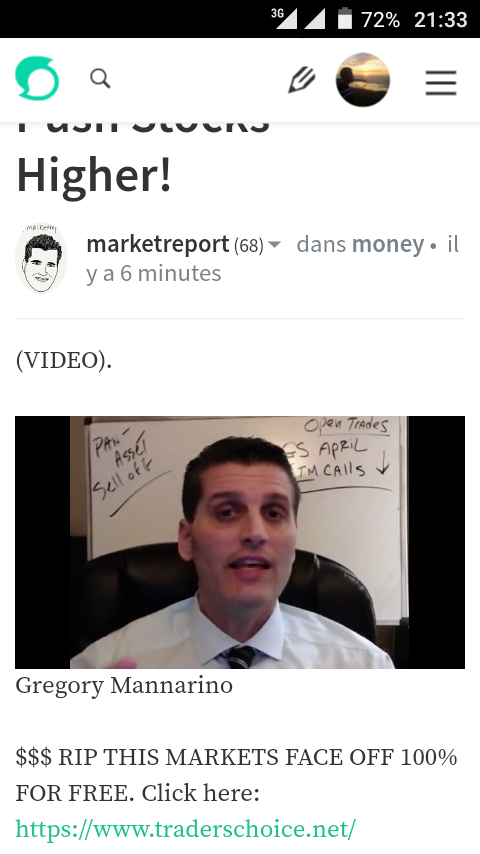 Thanks for sharing Sir !!!

Thanks a lot for video Mr Robin Hood

Thanks for information Mr Robin Hood !!!

Thanks for the video Mr. Robin Hood!

WoW... the stock market can actually go down???

@marketreport you crack me up Greg! i would have to see a 5% drop in a day to even get an ounce of concern! upvoted and resteemed So, what are you sayin'?

ITS ALL GOING TO SHIT REAL SOON

Ready for a slight pullback in gold and oil before it goes higher.

Please, Greg, let me buy mosh-pit tickets for that gig!

The stock market won't go down until it does. Looks like a 2006 Peter Schiff housing bubble warning all over again.

Thank you for sharing that ❤️

Thanks for sharing ! upvoted and resteemed !

Upvoted. You are a one hard working guy for the sakes of everyone with your consistent reports and observations you keep enlighting the people about what’s happening in the crypto world which is not a childs play and you do it like the very best pro you are. Keep on sharing.we learn from it.

Maybe gold stocks will be higher. Upvoted and resteemed

Really Wonderful comeback @marketreport.It's most important everyone.
Thank you for exellent comeback.I wait for your next post.Good byee and Take care sir

People are panicking because of the weakness the last two days and this big off a selloff, even though it's not that big in the grand scheme of things.

Thank You Greg, I looked at your charts several times to day. great post.

very good post and very useful. Thanks for sharing

Thanks a lot for videos !

Of-coarse every drop in the cryto currency market is a perfect buying opportunity.

Upvoted and resteemed sir! Thanks for the video.

Keept it up man! Thanks for the efforts ! resteem done ;)

Thanks greg! I would love to see at least a 10% correction in Stocks, but it’s tough to know when exactly that might happen

Greatly appreciate the update. It didn't make sense to me that there was the stock selloff, but nothing going to the metals or cryptos. I bought April calls on several things late expecting them to go up from Trump's SOTU and reinvestment. I agree that the river of cash has to flow somewhere. Tomorrow should be most interesting. The only way I can see this going down is if the NWO is trying to make Trump look bad, but they would also have to overcome the market dynamics of the people. Some folks will see more in the pay checks and might start investing in the market for the first time. As always, upvoted and resteemed.

Great as always. Thank you sir.

Hi! Gregory Mannarino, I see your recent updates on steemit..... thanks for share with us. @upvoted this post.
I don't think this sell-off is done yet, it can continue for awhile... in fact last week could have been the top, but only time will tell. All asset classes are in bubble territory, maybe they correct all at once... being in cash or shorting the market is not a bad idea, especially if this sell-off continues, which I suspect it will.

upvote and resteem thanks for sharing

It's amazing that people panic at the slightest hint of a sell off. It's probably because it's been so long since we've had one.

You always keep your head and inspire me to do the same these crazy days. Keep the vision brother and in check with reality. You always do.

You do need your own show, but I would selfishly hate to lose the private resource we here have with you.

This good information to use ,.😁😁

everything sold off and the dollar didnt put gains? where the f cash goes nowadays? they invented another instrument that we dont know?

Thank you for your video update!

Price closed below the 10 MA. Peter Brant thinks price broke out of the parabolic pattern, and is expected to continue downward. I'm being very cautious myself.

What a amazing post sir :) Thanks for sharing with us

Well said Greg. What goes up must surely come down. American is back open for business! Just be patient.

Thanks for the great video. Good luck to you and Good

The money has to go somewhere back into stocks we go. I think it was some profit taking for another great month of gains. With BABA earnings coming out on Thursday I think it a a great catalyst to help launch this market higher.
upvote resteemit done sir..

Greg as always. You rock.