GeekTimes #1. Alien Covenant: The Untold Story of The Engineers

I don't dare to call myself a geek, who is well versed in most famous fantastic universes. However, there are worlds and stories that grew and developed over the years, with us. Leaving a bright trace in the children's mind, forcing to crave continuations and follow their development even decades later.

One of my favorite universes is dark world of deep space created by "H.R." Giger and Ridley Scott - The world where Aliens live. After "Alien" 3 and "Alien Resurrection" this series has evolved from the science-fiction thriller into a second-rate fighters, fans of the franchise felt a surge of hope after the start of production of "Prometheus".

The audience took "Prometheus" is ambiguous, opinions divided. But personally I really liked this movie, it resurrected the amazing universe, expanded the horizons of narrative. A new race of Engineers has made this world more interesting and deeper. The ending of the movie has promised the next incredible adventure to the native planet of the creators of Aliens (as it turned out, no) and the answers to many questions. 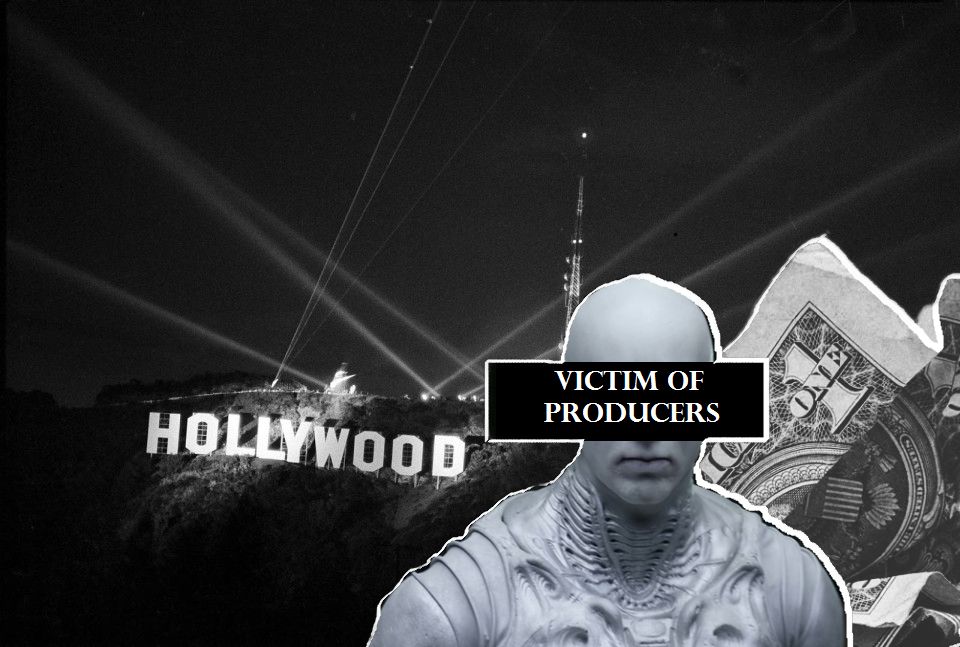 Unfortunately, even my boundless love for this story, was not able to overcome the disappointment from the movie "Alien: Covenant". But, this post is not a review of criticism, it is intended to show what movie we could get if Ridley had more freedom of action, time and budget.

A month ago, the art designer Khang Le, who worked on the concept-art of Covenant, posted his work, which were based on the primary ideas of the writers and Ridley Scott. After some time he closed access to his portfolio and deleted all the art, but the fans managed to save the images. As it turned out, we could see a completely different movie, the movie we deserved.

All images are taken from these sources: 1 and 2

Village instead of Megalopolis

The capital of Engineers in the final movie looks very compact and humiliatingly simple: the village is an area of several kilometers. I was expecting something more from the guys, who traveled through the cosmos long before the appearance of human and were able to create such an astounding biological weapon. Such a feeling that we were shown the degraded descendants of the once great race. However, Ridley Scott himself stated that these are the same Engineers. Originally, the capital of the Engineers looked like an ancient metropolis with huge skyscrapers and biomechanical architecture. Khang Le was trying to maintain the Giger’s style. 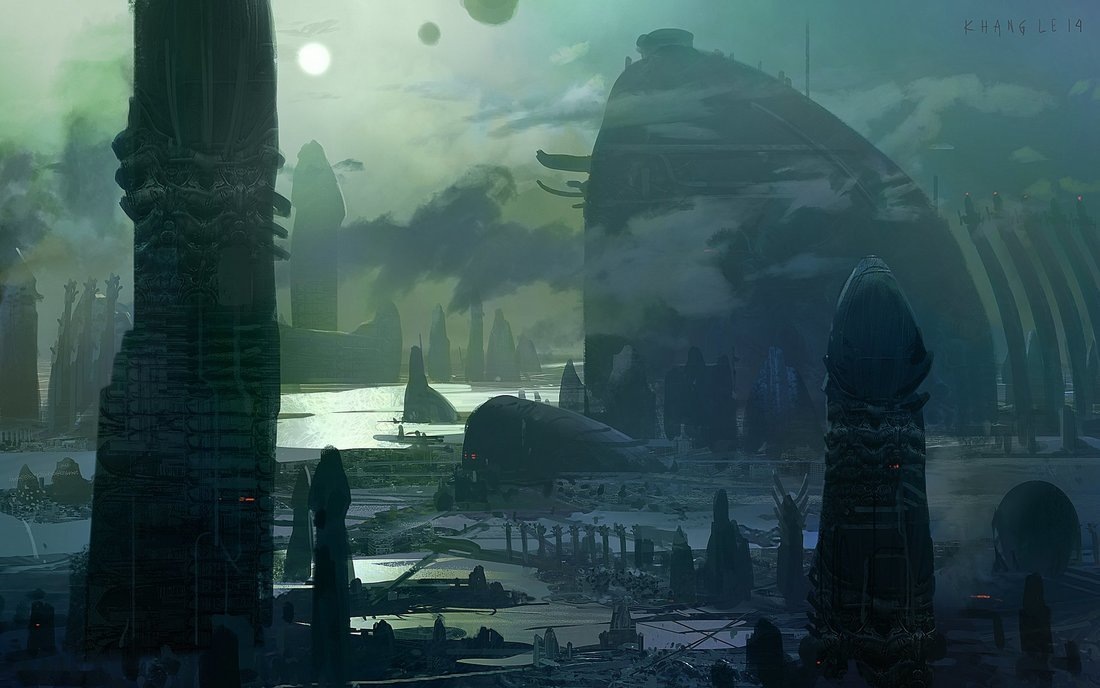 Many of the buildings have a pronounced bioengineering origin, and generally convey the atmosphere associated with Aliens. It's something closer to the architecture of the ship from the first movie. On the city squares there are statues of ancient Engineers warriors, in the bone armor covered with strange writing. It is obvious that the engineers had a rich history and culture with own heroes, legends and customs. While the movie they lived in strange caves, more suitable for Neanderthals, and walked in some kind of rags. 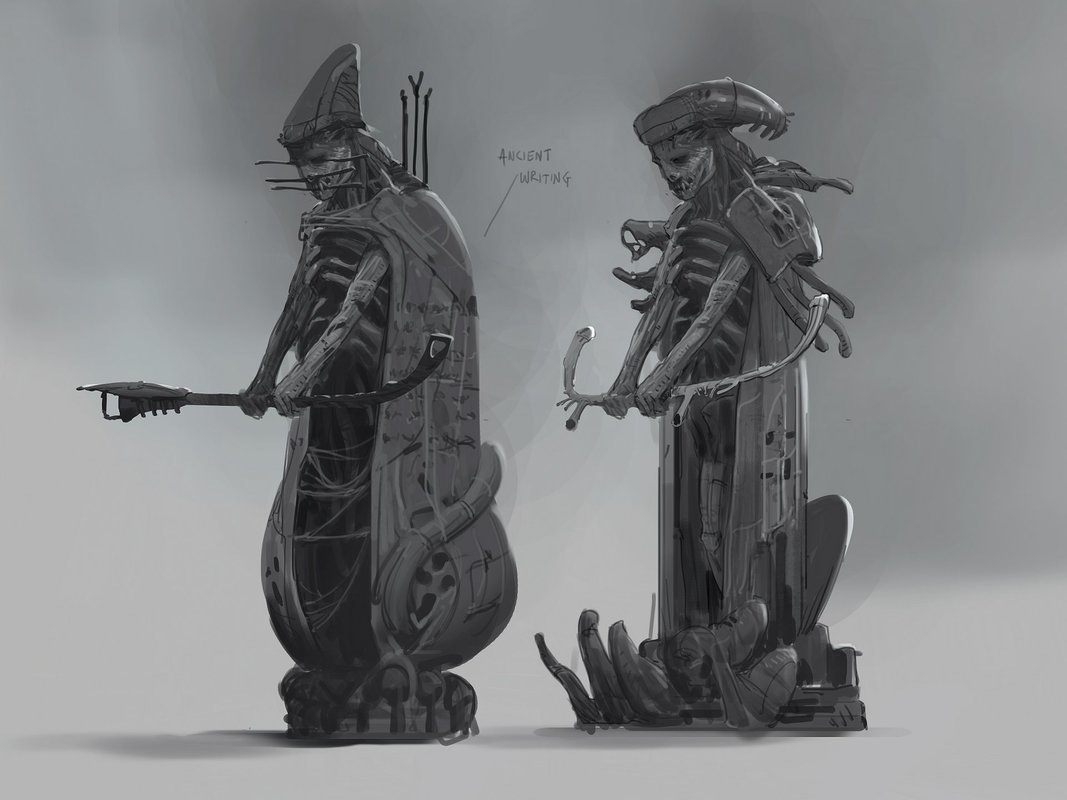 Even a brief immersion in their history could explain the motives of the Engineer from the movie Prometheus, who committed suicide on the Earth, thus giving the beginning of life. We could get an answer why the engineers created us, or it was just a coincidence?

Engineers behind the scenes

As we remember, David destroyed the entire race of Engineers in just a few minutes. Black substance killed the engineers instantly devouring all the organics and turning them into something similar to the statues or mummies. In the early version of the script, their fate was much more interesting. The virus enclosed in the black substance caused numerous and uncontrolled mutations. From the bodies of infected appeared different beings, while the carriers themselves continued to mutate. David managed to create from the original substance a swarm of insectoids who were carriers of the mutagen and infected the engineers bodies. 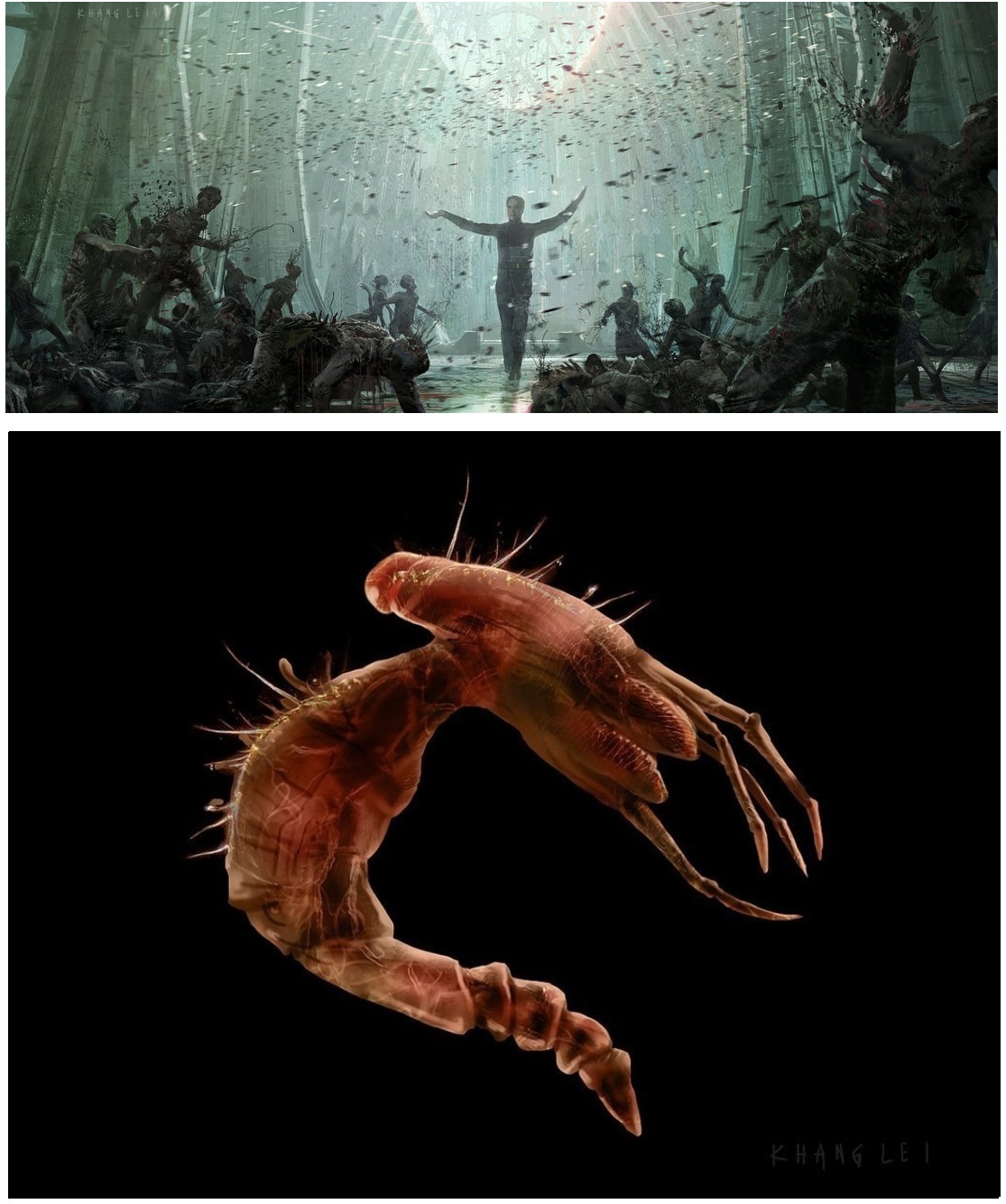 Over time, the Android learned to control the pathogen, and to direct mutations to the desired path, creating creatures with specific characteristics in the bodies of carriers. That's how David has created Neomorphs from Engineers. 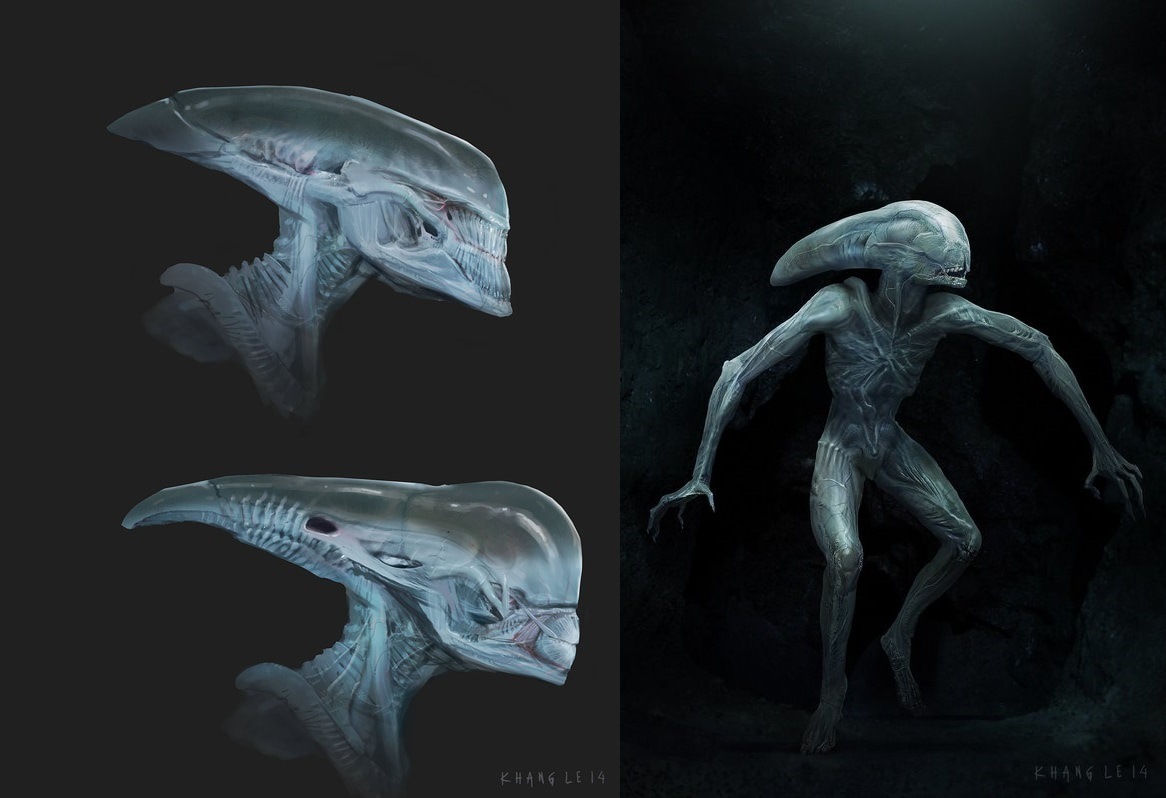 Some of the engineers were able to survive and start confrontation against David. They underwent partial mutations, but kept their sanity and tried to stop the obsessed android.

This would explain why David stayed so long on the planet, and did not go to destroy humanity at the first opportunity (Although he clearly seeks to do this).

We also could see the full production cycle of the Neomorphs. David connected to the biomechanical laboratory of Engineers and put the production of parasites on the flow, controlling the growth of embryos. After the arrival of the Covenant, David got a new biological material. Neomorphs were so obedient that delivered to the lab the bodies of the dead and the living of the colonists.

New Aliens, created on the basis of human biomaterials were classic monsters from the first movie. They helped David finally defeat the Engineers and go into deep space, with the goal of finding other races and continuing experiments. After all, he always dreamed to be a Creator.

At some stage of making the movie, Ridley Scott wanted to add to the story rather odd idea: Jesus Christ was the last Engineer who visited the Earth. But people crucified him, so the Engineers decided to send the ship to destroy humanity (Narrative connection with the film "Prometheus").

All these concept arts were created in 2013-2014 and were the sketches to the first version of the script. In that time, Ridley Scott was busy working on the movie "Exodus: Gods and Kings", so he had almost no control the process of creating of the "Сovenant".

Many fans were unhappy with the lack of the classic xenomorph in the movie "Prometheus". Under the pressure of producers, Ridley was forced to return to this untwisted image and abandon numerous developments that detailed the history of Engineers.

As a result, instead of developing the history of the Engineers, their motives and place in the universe, we received an inferior story line of the crazy professor (David), which tries to establish links with the old films, instead of moving forward. Although, we could get an epic science fiction about the death of a high-tech race from their own weapon, under the control of cold synthetic mind with the syndrome of God. Anyway, this is just another untold story… movie review art story busy
3년 전 by natord66
$3.59
16 votes
댓글 남기기 10
Authors get paid when people like you upvote their post.If you enjoyed what you read here, create your account today and start earning FREE STEEM!
STEEMKR.COM IS SPONSORED BY

Wow, this write up is more than just a mere thoughts, this is really great, but I thought science should be among the tags, anyways you have done a great job writing this @natord, well, am and artist and I do more of pencil work but I must confess that I love what I saw on your blog today.

Not sure about the tag science. After all this universe is based on the imagination of its creators, and then uses some scientific basis for detailed descriptions of the concepts. Today I wanted to digress a little from science, about which I write constantly, and have a little fun and of course try to cause interest of readers who are themselves creators, like You. So I am very glad that you liked this post! :)

Okay, I do understand your point too, it's a great one, steemon!!!!

no words! I need a dictionary to express what I read :)

Cmon! Busy shows that reading will take 6 min. You couldn't make it! :)

just now read it fully and read the supernova article . that article is just amazing. did god made me ? no super nova made me and contributed 73% :P

This is awesome! I like this so much I could face hug you! source
I freaking love alien and having the story illustrated by such nice images really puts a cherry on top!

That's why I had to share this, I know that the fans appreciate, it's like a bonus story :) Thanks for hugs!

Wow this is an amazing write up !!!