Heroes and the Creation of Myth: The Avengers

Superheroes occupy a nearly-unique position in the history of human character creation. They are creatures of myth, but at the same time people with the concerns of human beings, even when they are themselves alien. This puts them in a position to not only be the subjects of myth, but to interact with and in some cases control the creation of the mythology which surrounds them.

In this series I set out to analyze the different ways heroes participate in the creation of their own mythology. I've decided to begin with the largest single continuity ever attempted in film, the Marvel Cinematic Universe. In the time leading up to the release of The Avengers: Infinity War I'm going to watch or rewatch the eighteen existing MCU films in order to look at them specifically from this perspective. Today we're looking at the first film bringing all the characters together, The Avengers (2012)

Now we're getting complicated. It might be easy to look at The Avengers and not see very much activity by the characters in the creation of their respective myths. After all, there's almost no public interaction in this movie, and all of what there is contained in desperate action scenes. But in fact it's a rich field of mythologizing because of the way the characters relate to themselves and each other through their myths. The plot of The Avengers could be described as each of the characters confronting their own relationship with their myth. 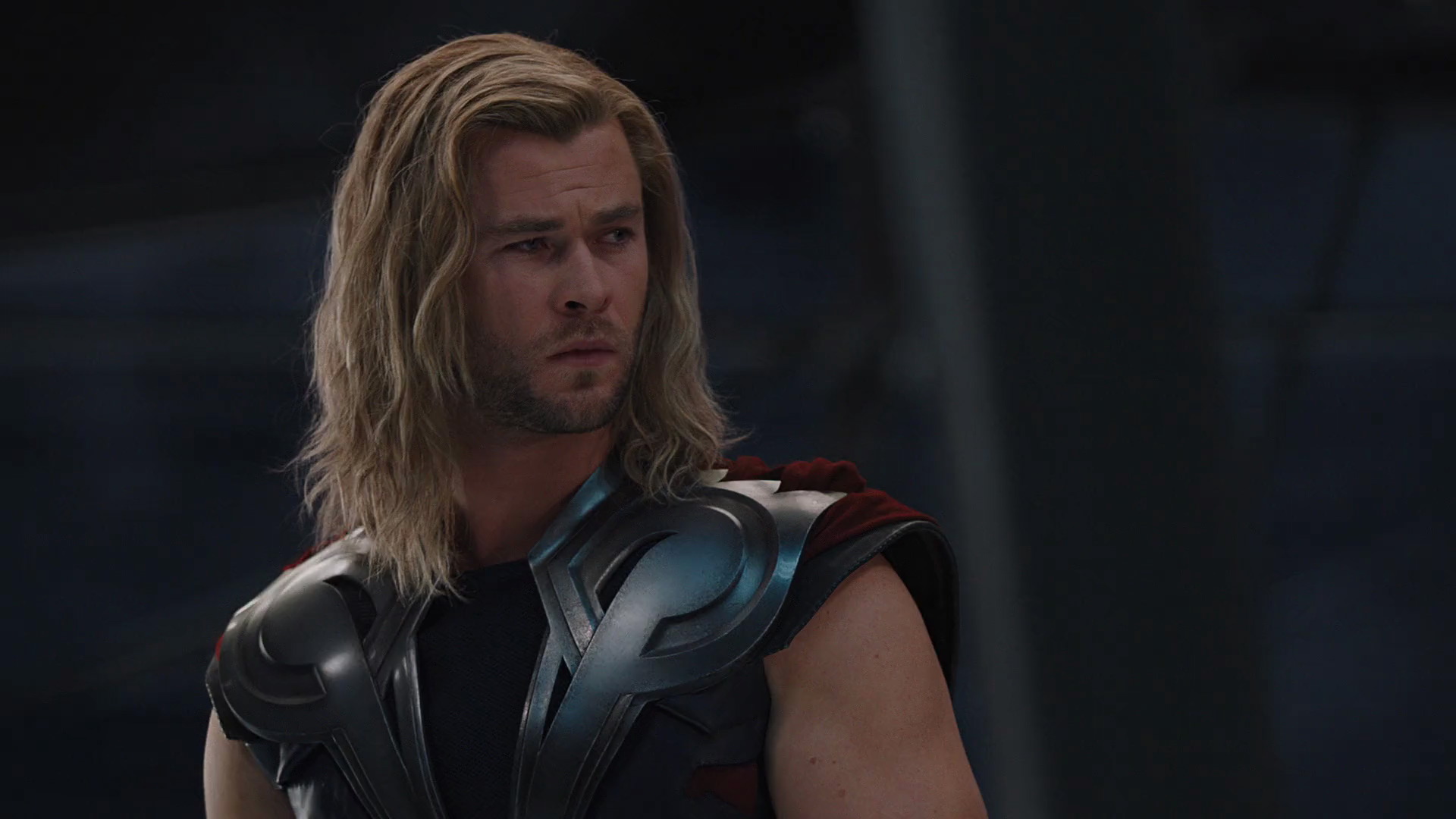 Thor is a particularly good example to start with. In his own movie, he took his own mythic presence so much for granted that we skipped talking about him entirely. He starts out this movie the same way: by assuming that he has the right to take Loki from the Avengers and discipline him unilaterally. Iron Man and Captain America disagree, and Thor has to learn, violently, that the way humans perceive him and his brother is worth considering. Later, Nick Fury reveals that the reason S.H.I.E.L.D. has been experimenting with weapons based on the Tesseract is because they're reacting to Thor's previous presence on Earth, and Thor is clearly taken aback by the idea that his actions, and human perceptions of his actions, can have such long-term consequences. He's beginning to discover the existence of his mythology, and even his potential responsibility for it. Steve Rogers, meanwhile, is grappling with the perception that his mythology is obsolete. Frozen for seventy years, he's come back into a world where patriotism doesn't mean what it once did, and he no longer knows how to inspire people in the character of Captain America. He doesn't have to worry about this for long, though, as he is thrown into the perfect situation to restore his confidence, fighting Loki's ridiculously-over-the-top fascism in Germany, complete with a deadly-earnest Captain America zinger. While his own conflict is resolved early, Rogers then becomes a foil for Tony Stark's, which parallels the main plot of the movie. 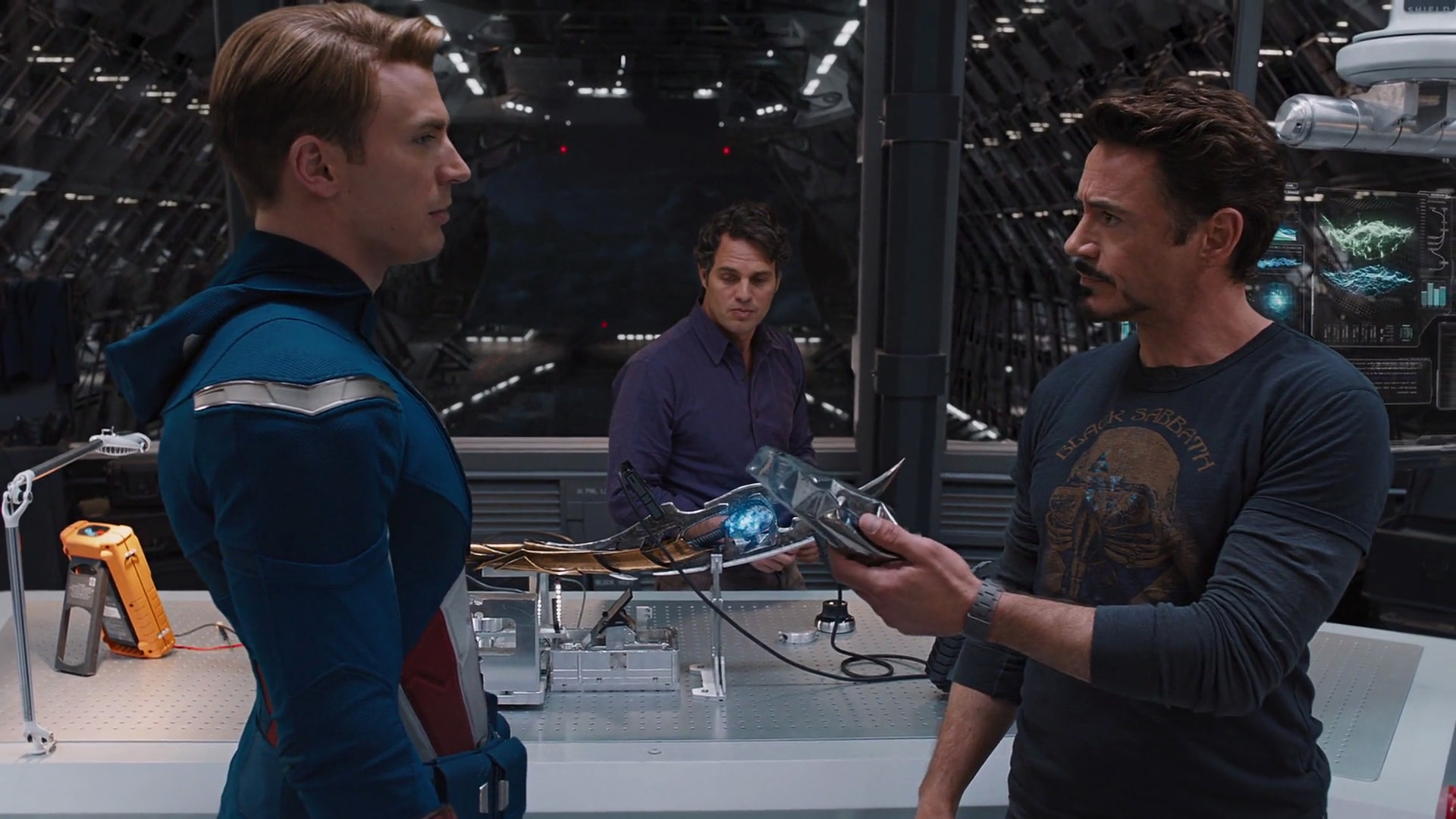 Steve is responsible both for Tony's first comeuppance and for his ultimate central conflict. Tony calls Steve useless in the lab, but later relies on Captain America to save his life while restarting the Helicarrier's broken rotor. This again supports's Steve learning that he's relevant after all even in the modern world, but it also leaves Tony being wrong, which of course Tony hates and refuses to face. Later Steve accuses Tony of being unwilling to "make the sacrifice play," to accept a no-win situation and put his goals ahead of himself. At the end of the movie Tony has to do just that. Would he have followed through on it, would he have even thought about it, without the concern that what Captain America thinks of him might just have been right? Tony Stark can deal with the image of being a selfish ass, but Iron Man has to be something more. Iron Man has to be a hero even when it might cost Tony his life. The fourth major member of the Avengers, Bruce Banner, remains the most fascinating to me, and his plot is the strongest in this movie. Banner avoids even saying the word 'Hulk,' preferring to refer to his alter ego as "the other guy." When Natasha arrives to recruit him for the project, he knows that she has prepared for a myth, not for a man. She wins him over by convincing him that they need the scientist at least as much as they need the Hulk. The myth of the Hulk suffuses the movie long before he appears. Everyone, including Banner, is concerned over the risks he presents, and Banner's sardonic reaction to them isn't comforting to anyone else. S.H.I.E.L.D. has built a very room-dominating cage aboard the Helicarrier in hopes of having some recourse against the Hulk, and it's constantly in everyone's mind because they're using it to imprison Loki. When he does eventually Hulk out for the first time, he's as destructive and uncontrollable as everyone had feared, and the only way to deal with him is to convince him to jump out of the carrier.

But when Banner awakes, his reaction isn't to run. He finds a motorcycle and makes his way to New York to fight the alien invasion with his teammates. Facing incredible odds, he recognizes the need for the Hulk to fight the invaders, and becomes The Other Guy intentionally. And this Hulk is more in control, more focused on who he wants to be fighting and who is his ally. (Although that doesn't keep him from punching Thor when it's convenient.) Although Bruce is the one character who would like to run away from his myth forever, he's also the one character willing to face it head-on, and he is rewarded for it. I find him the most admirable of the Avengers. 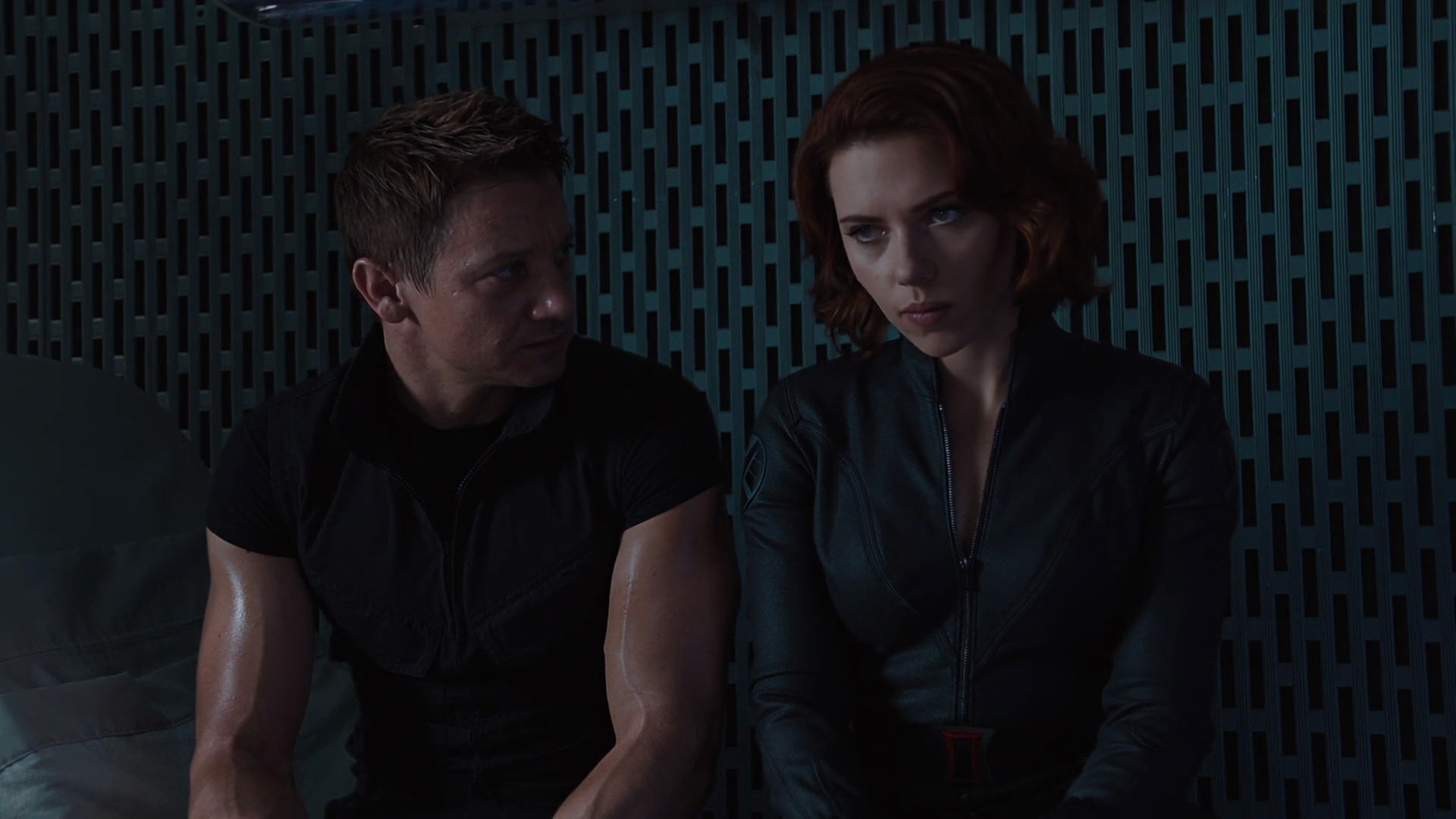 It's not just the main Avengers who face their mythology. Hawkeye and Black Widow share a plot which has them both questioning their self-conceptions of loyalty when Hawkeye is magically suborned by Loki and Natasha feels compelled to save him far beyond what she can explain of her own motivations. Her own need to be an emotionless intelligence machine is challenged by the deep loyalty she clearly feels for Clint, while his fierce loyalty to S.H.I.E.L.D. faces crisis after he recovers from Loki's control and has to face the way Loki used him to attack the Helicarrier and kill many agents. While these aren't external mythology, these core self-concepts are the myths they tell themselves. Loki, meanwhile, is drowning in his out-of-control mythologizing. His belief that he should have been king of Asgard, and that humans will be better off being ruled, leads him open to being completely taken advantage of by Thanos and the Chitauri. He has no practical route to his goals, no test for his theories. In a way he's the complete opposite of Banner, whose identity is driven by what has been forced upon him. Loki's identity flows entirely from what Loki wishes to be true. And it leaves him a pawn who believes himself a king. 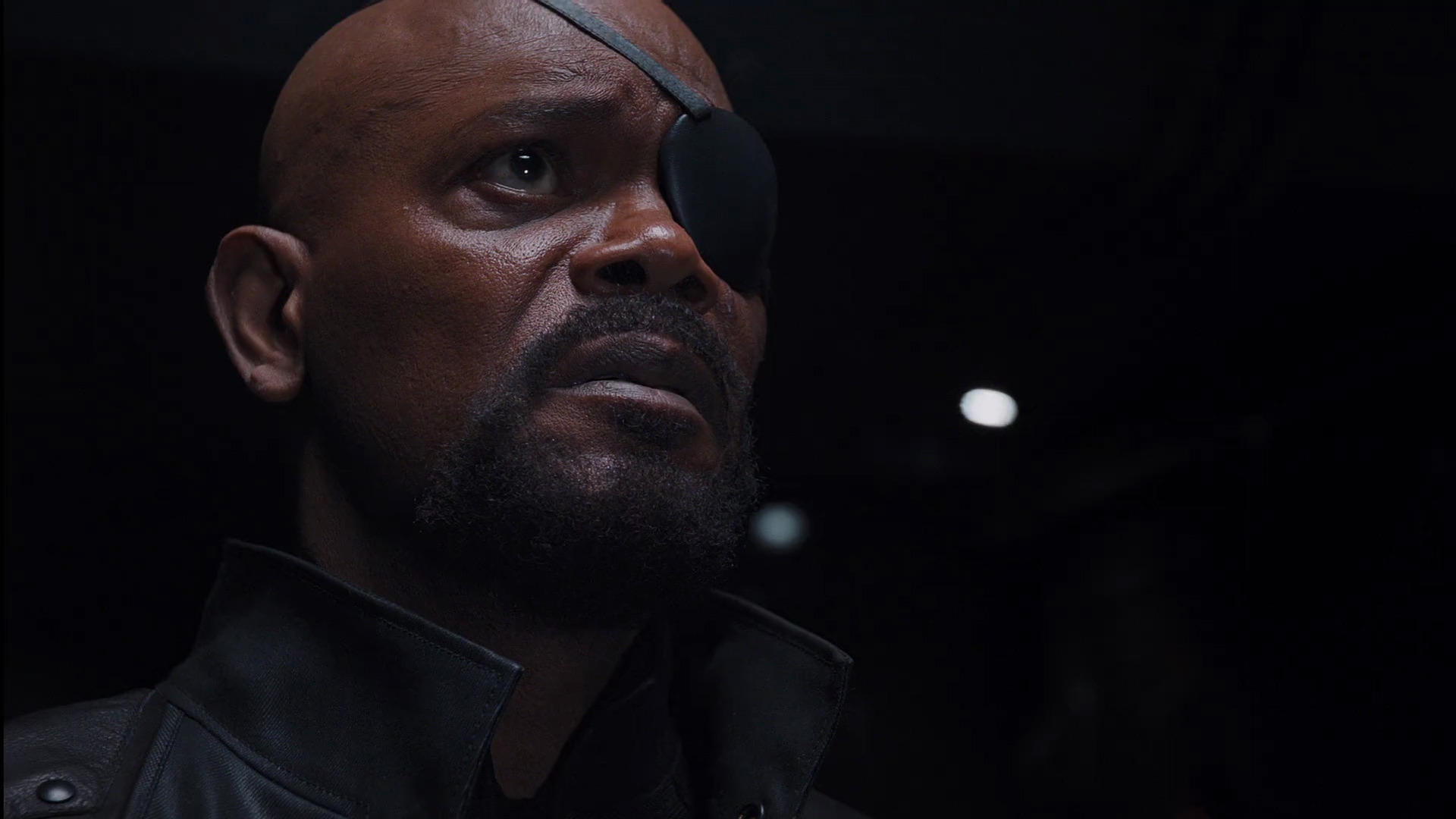 And what of S.H.I.E.L.D.'s chess master, Nick Fury? Fury begins the movie as a master administrator and strategist, choosing paths for his intelligence agency that anticipate as many possible outcomes as he's able. By the end, he's a visionary. The Tesseract was a mistake, Phase Two was a mistake, the Helicarrier is a wreck. All of his carefully-made plans have fallen apart. But the plan that wasn't a plan is the one that saved the day. The Avengers Initiative may have been the least-thought-out idea that Nick Fury ever came up with, and it's the one that paid off the largest, because the Avengers came together when they needed to. So now Fury has bought into that approach wholeheartedly. He believes the Avengers will return when they are needed because they are needed, not because of any plan.

In a way, he has become Loki's opposite number. He believes because he likes the world better when his belief is true.

All images in this post are from The Avengers, copyright 2012 Marvel and Subsidiaries, used in this post under Fair Use: Criticism. Provided courtesy of Movie-Screencaps.com.

movies superheroes mythology mcu avengers
3년 전 by tcpolymath68
$73.87
376 votes
댓글 남기기 1
Authors get paid when people like you upvote their post.If you enjoyed what you read here, create your account today and start earning FREE STEEM!
STEEMKR.COM IS SPONSORED BY

Good analysis,
You guys can watch all of the marvel cinematic universe(MCU) here: https://www.iwatchflix.xyz