Ghost: the best band a metal fan hasn't heard of

Well, I have been a metal fan for a long time and I had never heard of them. To be fair I live in South-East Asia and we don't exactly find out about metal acts until much later.... anyway..... 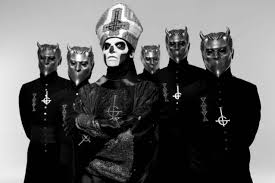 A friend of mine; nay, a great friend of mine, suggested I listen to Ghost about 2 years ago and I have to admit that I downloaded the album and didn't pay it much mind.

I skipped through the songs and barely listened to them before dismissing them. I kind of put it on the back-burner of my musical to-do list and would usually skip the songs when they came on. Then something magical happened.....

I was jogging outdoors and the skip button on my Bluetooth headphones stopped working and I wasn't going to stop running in order to sort it out because I live in Thailand and it is a million degrees pretty much all the time; pausing in your run in the end of your run.

The song it was stuck on was called “Square Hammer” and it is absolutely epic.

This one song encouraged me to look into ghost a bit more and if you end up feeling like this song is something you like I strongly encourage you to look next at “Cirice,” then “Rats,” (their newest song / video,) the perhaps to delve into the history of the band look at “Monstrance Clock.”

They are melodic metal, which appeals to me. I initially ignored them because I like my music a bit harder than they originally presented to me. However, not everything can be Dimmu Borgir (which is also amazing, if you think like I do.)

Their new album drops on June 1st and to be honest I haven't been so enthusiastic about a release date in as long as I can remember.

music metal life ghosts awesome
2년 전 by gooddream81
$212.38
39 votes
댓글 남기기 23
Authors get paid when people like you upvote their post.If you enjoyed what you read here, create your account today and start earning FREE STEEM!
STEEMKR.COM IS SPONSORED BY

I had never heard it, but now I can not stop hearing it, thanks for sharing it, we hope more post like this

I am a lover of the classic rock of the 90s, the first time I listen to this band, your video is something maquiabolic .. lol .. I am currently outdated of modern rock .. I am from the time of:

nothing wrong with those bands, but it might be time to update a bit... haha i like most of those bands too though :)

is that the 90 for me was the golden years of rock .. but if you're right I have to change my software and hard drive of my brain to be able to update my musical repertoire, apart from ghost, that another band recommends me to be from this Year to update my music system.

I was in high school and college in the 90's so yeah. I agree with you about that being the golden years. If you are talking about checking out Dimmu Borgir as well i must warn you. It is nothing like Ghost haha

DIMMU BORGIR is more Machiavellian than ghost hahaha, that's what I think. let me keep listening to this video.

yes. I love that new song. Their new album drops in a few days.

I'm not a huge fan of Ghost, but since I listened for first time to their first release "Opus Eponymous" I was so curious to go to one of their shows. They have come a couple of times to Barcelona but haven't had the chance to go to the concert. Friends of mine who have gone said that Papa Emeritus (swedish singer Tobias Forge) is a great frontman and the show they do is also great. Hope I can go next time, meanwhile watching their music videos is so fun.
Rock on!

i have to say i am very jealous that you got to see them live. I will likely never get that chance as the only shot we get at bands down here is Singapore and the market is too small to attract anyone but the biggest bands.

That sounds cool.... I'll take a look at them

Sure i do.... It's my first time listening to that kind of music; but i sure do love it

'Square Hammer' is catchy. I like the keyboard line in this one. For not being much into Metal..It's now in one of my playlists. You have officially created a MONSTER over here. Uggggg. Now I have to delete all my Yanni tracks (HAHAHA). I like 'Absolution' as well. I think I like the piano in the background. Thanks for sharing this band and making a believer out of me lol.

don't delete Yanni. That Greek god has made tons of great memories for me. I am thrilled you like them. CONVERTED!

Haha. Yes. I’m Slowly being lead to the other side. LOL. So far your recommendations have been pretty good I must say. No I won’t delete Yanni. That’s my bedtime playlist. I also play a lot when I’m painting. I also find pleasure in Cirque du Soleil soundtracks. My favorite is Alegria.

glad you like it. happy to help someone else find this band. They are really amazing.

Their sound, particularly in the chorus, reminds me of something. I can't quite put my finger on it but as best I can figure I think it calls up some Bad Religion.

I enjoyed the track. Checking out some of their others. Thanks.

Bad Religion is one of my favorites of all time. Seen em in concert twice. They are excellent live. cheers!

It's really beautiful song, I honestly did not listen to this kind of music so far, but it's ok, it's not just noise, it has a melodic voice line and lyrics. Thanks for sharing it with us, so we find out that good music can come from any kind of music.