We live in a world full of mysteries, so numerous we'll never figure it all out.

Personally, I love that.

There's a beautiful park near where I currently live, with acres and acres of trees and green space to wander and explore. Dotted throughout are wooden benches, each with a golden plaque containing the name and perhaps a bit of personal information or a message relating to the person it's in memoriam of. Most of the information is pretty mundane, name, birth/death dates, and occasionally a generic saying, but one bench stood out because it contained the lady's nickname, 'Davie', short for Davina, and the phrase
'Well, there we are aren't we…..' , presumably one of Davie's favorite sayings that her friends and family found endearing. Somehow it gave me the sense that I'd met Davie and got a glimpse into her personality.

The dates on the plaque indicate she would have been a young woman in her early 20's during the dark days of WWII, most likely living in the London area. That meant the terror of the Blitz, and the harsh realities of rationing of food and other goods, not to mention living with the looming threat of impending invasion by Nazi troops.

No one got through those times without at least some grit, resourcefulness, courage and community spirit---all that, and a good sense of humor would have been a big help too.

So I imagined Davina's catchphrase 'Well, there we aren't we…' being stated in a pleasant, good humored way that fully acknowledges the gravity of the situation, whatever it is, yet without any trace of self-pity or defeatism.

No, it is both understanding and sympathetic and a loving boot in the pants to propel you forward all at the same time! 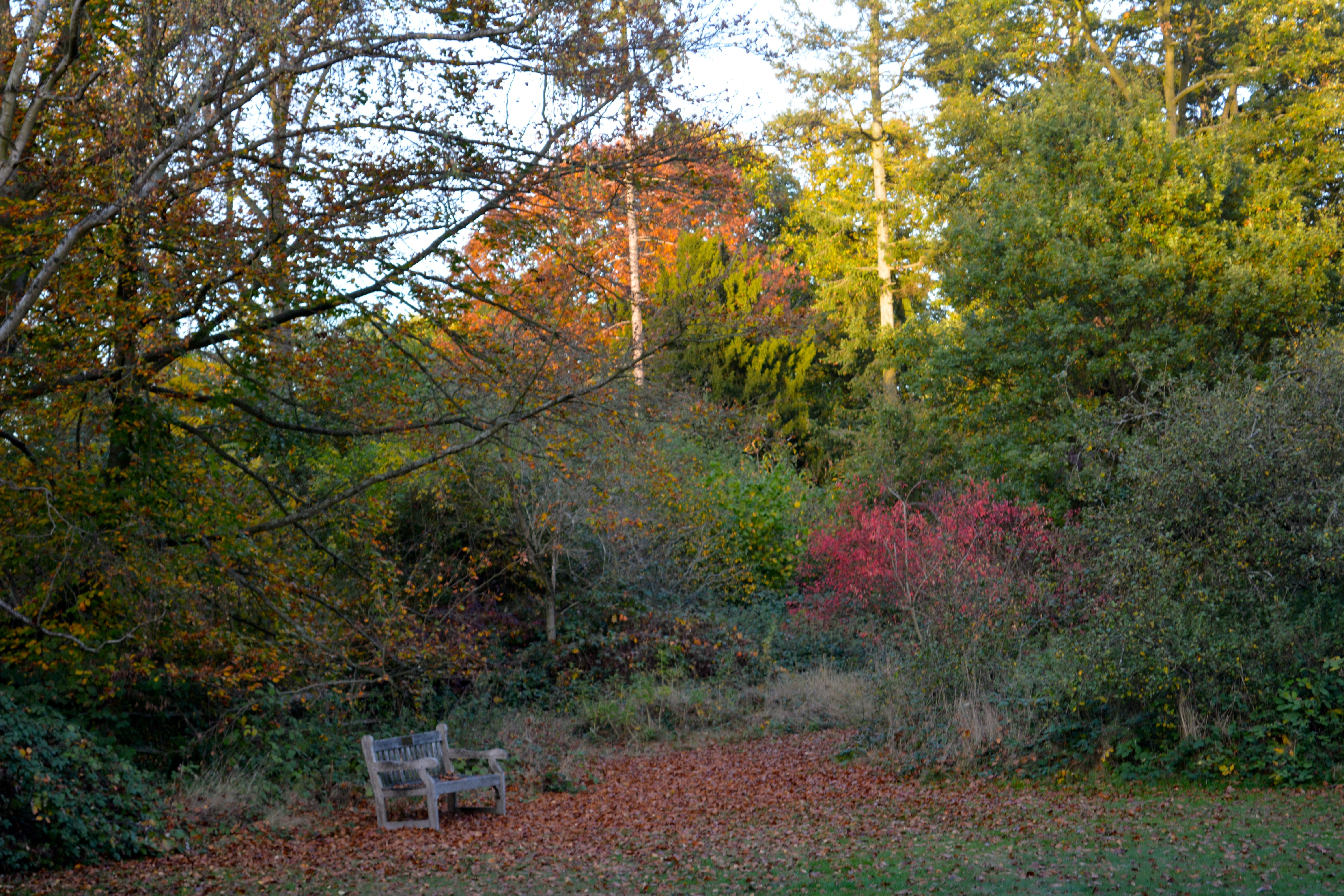 I would often pass by Davie's bench on my frequent walks and, feeling a certain kinship, would sometimes even say hello, silently, because, well, I'm not a complete nutter and there are other people around. Davie began to feel like an old friend, perhaps a grandmother or aunt who's a good listener and always knows how to put things in perspective. Someone you can have a good cry with and then a really good laugh with once you've gotten the tears out of your system.

As time went on, I'd even tell her a bit of the news and goings on in my life and imagine her saying ' well, there we are aren't we…..It always made me smile. It was comforting somehow.

One overcast, foggy day in late October I was ambling through the park with my husband. I'd 'introduced' him to Davina a while back, so he was in on the story. The crisp, woodsmoke scented air was even more pungent in the autumn mist. The fog and dampness of the day had apparently kept everyone else at home in front of the telly. We seemed to be the only people in the park.

Much to our surprise, just up ahead we saw a woman seated on Davie's bench. As we drew near we saw that she had chestnut brown, slightly wavy shoulder length hair. I couldn't determine her age. One moment she didn't look more than 25 and then next she could have been anywhere between 40 and 70. I can't explain it better than that. Ageless is the word. As we approached she smiled a very bright, friendly smile, the kind that you just can't help responding to.

We said hello and exchanged brief pleasantries, commenting about the weather, which is always a popular subject in England.

The next thing she said stunned us! With a good natured chuckle she said

Speechless, my husband and I gasped and stared at each other in amazement, our jaws just about reaching our chins. What a strange coincidence---or perhaps she'd read the plaque and liked the phrase. Yes, that must be it.

Regaining our composure, we turned back to say goodbye and wish her a pleasant afternoon. But she was gone. Like a puff of smoke!

We looked all around in every direction down the pathways but she was nowhere to be seen. We'd only looked away for a second or two. Surely no one can walk that fast!

We've been back to the park many times since that overcast October day but we've never seen the lady again.

I like to think that, perhaps we had a little visit from Davie. That it was her way of saying she's enjoyed 'meeting' us too.

So, did we see Davie? Was it just an odd coincidence? Is this true or is it fiction? All photographs are my own.

mystery supernatural ghoststory oldtimers halloween
4년 전 by eyeofthestorm52
$63.33
77 votes
댓글 남기기 11
Authors get paid when people like you upvote their post.If you enjoyed what you read here, create your account today and start earning FREE STEEM!
STEEMKR.COM IS SPONSORED BY

This is a wonderful story, I love it when fact and fiction blend, recollection and invention swirling together like oil and vinegar to create a wonderful dressing for the salad of my mind :):

I have a similar relationship with some neglected benches tucked away in corners of the extensive park system along the river next to my house. I often amuse myself by watching the shades of yesteryear going about their daily business in my modern day haunts. Sometimes I even see my own past shade, crossing an intersection without looking up to see me watching, a remembered moment in a long ago day, a momentary arc of electricity bridging the gap between myself and myself ;)

Thank you for such a beautiful and poetic comment. I've read it several times.

What a very touching and beautiful account of the special bench in a special place of peace and serenity and the beautiful woman who the bench was in honor of. I think Davina heard your wishes to meet her and I really think that the world has many miracles if you believe!

Davie is a symbol of hope, possibilities and love. You and your husband were very blessed with such an awesome encounter! Thank-you so much for sharing this beautiful story. I will resteem it because it can give others a moment of hope and wonder!

I appreciate the re-steem, cabbagepatch. I'm thankful to be able to share this story and hope it will be a blessing to all who read it. I'm so happy to know it touched your heart. :)

A lovely story and well written. I always wondered why people had benches really maybe you have just shown me the reason. Maybe she was thanking you for observing her (possibly) favourite spot and taking the time to remember her time there. A deep connection and you keeping her memory alive, beautiful and heart felt :)

Yes, I think it indeed may have been her favorite spot. Thank you for your lovely comment.:)

A wonderful story and great to hear of people not be frighten by such events and possibly helping a lost soul on it way, with a little recognition :)

I got goose bumps reading this. Rather it is true that is was Davie or not, I want it to be. <3

Thanks for stopping by debralee. I'm glad you felt moved by my post. I thought it best to let the reader decide on this one but I'll just say that it was a very unique and special experience.......