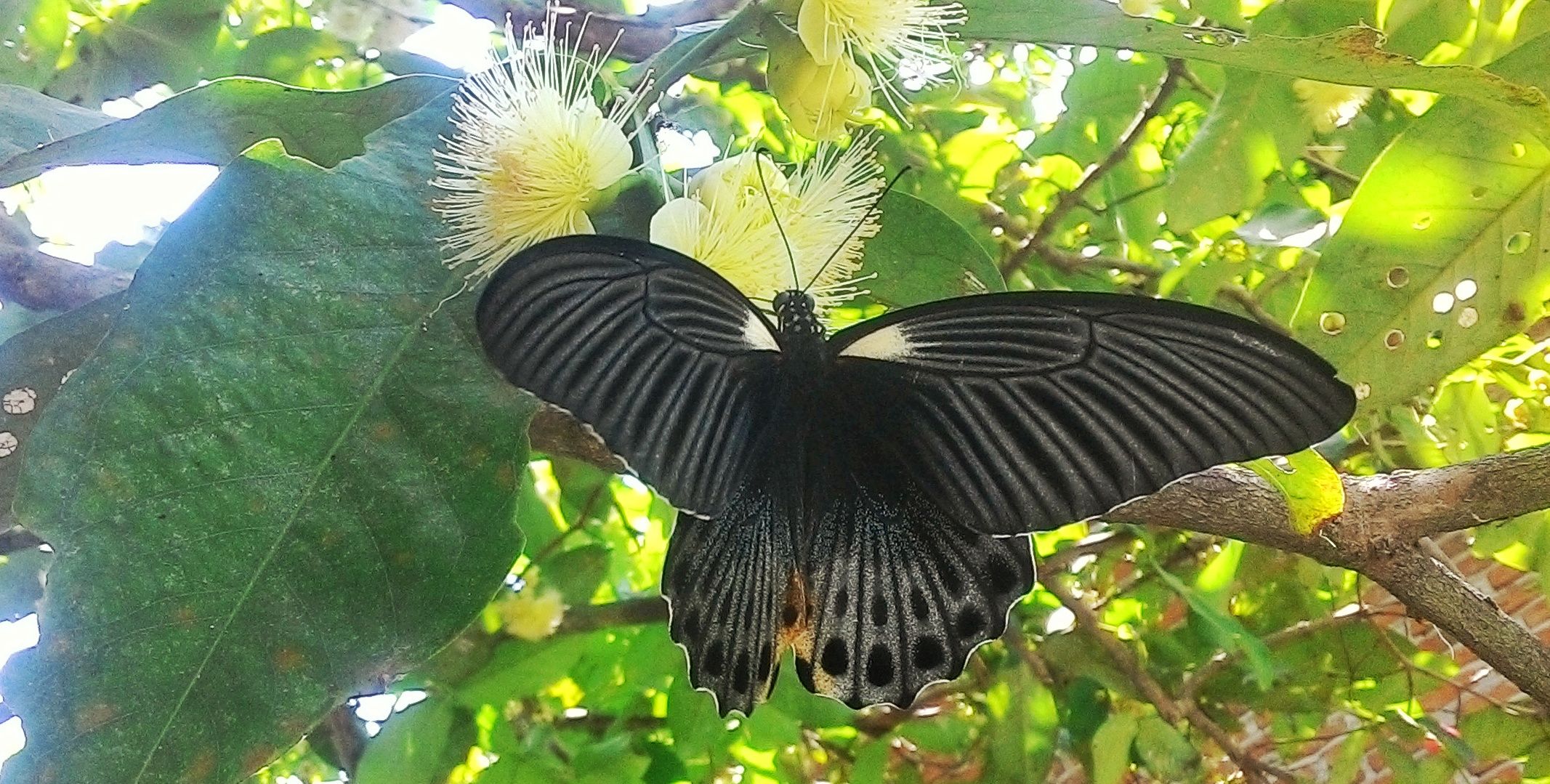 I found in cashew trees as she flew over pink blooms and ate pollen.

"Papilio memnon" is a kind of butterfly from the Papilionidae tribe. It is widespread in southern Asia, from the Indian subcontinent, Southeast Asia, to southern Japan. females have more color variations and forms of "polymorphism".

His name is obtained because the male butterfly wings are dominated by a blackish color, reminiscent of the priest's cloak. In England he is known as Great Mormon. Many of them are mimicry of an uncomfortable butterfly type. The diversity of these species is widely studied to understand the underlying genetic character.

Male butterfly wings are dark blue to black. Sometimes there is a red dot near the base of the front wing. The upper side of the female front wing is sepia colored, with a grayish white line and a red color near the base.

The upper side of the rear wing is black-blue, with 6-9 white patches.

Some other forms have a 'tail', an extension of the rear end of the rear wing, called the "swallow tail". 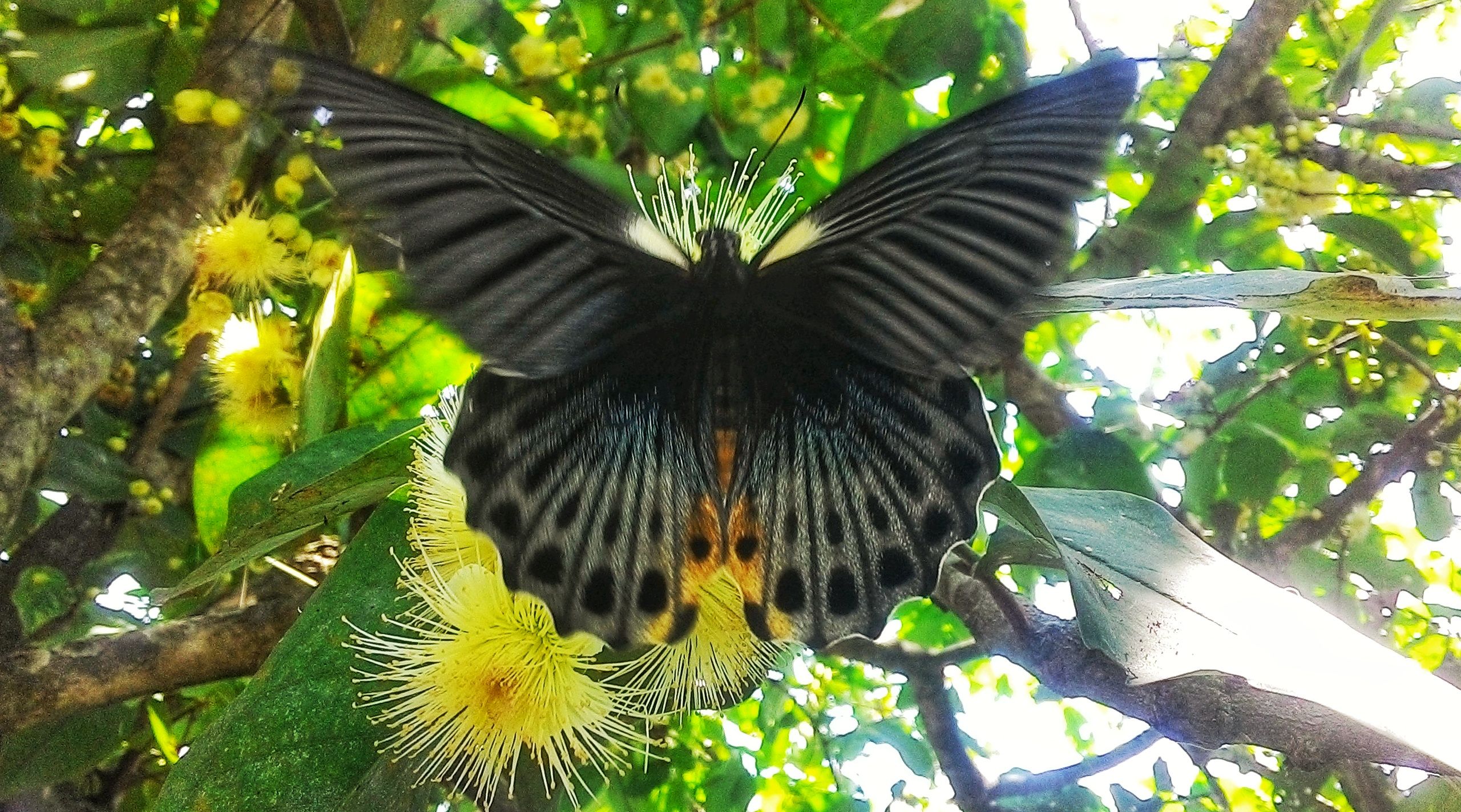 I found this butterfly in Aceh Besar, Aceh. Its location is in the village of "Angan" Darussalam, Aceh Besar district.

Have an awesome day!

nature life smartphonephotography photomatic busy
4년 전 by anwarabdullah60
$3.63
29 votes
댓글 남기기 11
Authors get paid when people like you upvote their post.If you enjoyed what you read here, create your account today and start earning FREE STEEM!
STEEMKR.COM IS SPONSORED BY

Hello anwarabdullah, I am a scheduling service for randowhale. Read more at my guide post.

Thank you for the information @whalecatcher

Friend that butterfly looks like a movie. Good thing you could capture it. regards @anwarabdullah

very beautiful and nice photography I really like to see it.

Thank you very much :) @cut-srimawarni Sneaky Ninja Attack! You have just been defended with a 2.04% upvote!
I was summoned by anwarabdullah. I have done their bidding and now I will vanish…
woosh

P.S. If you or anyone you know has been a victim of @grumpycat please know that he has been harming people throughout Sōsharumedia (ソーシャルメディア). Stealing the service that I (and other bots) have provided them and hiding behind a facade of stopping bid bot abuse which he clearly has no interest in.
Sneaky Ninja is a very responsible bot, working directly with steemcleaners, actively pursuing spam and abuse on our platform. If you would like to see what steps Sneaky Ninja has taken to fight bid bot abuse see this post and this post. Also know that I am working daily on other solutions.
If you would like to know my personal take on bid bot abuse and why I do not agree with the 3.5 day rule, see this post

Grumpycat is a villain that must be stopped to protect our freedoms here on steemit!

There is a resistance that has formed to counter his tyranny.

If you would like to take an active role in stopping this menace and helping other victims like yourself...
Learn More Here

I have also summoned my love, Kusari to offer some limited help to victims like you.
See Here