A few days ago, I wrote about camping for the first time last summer. My boyfriend and I hiked up Looking Glass Rock in Pisgah Forest, North Carolina, and I included plenty of photos from our trip, including the spectacular views. 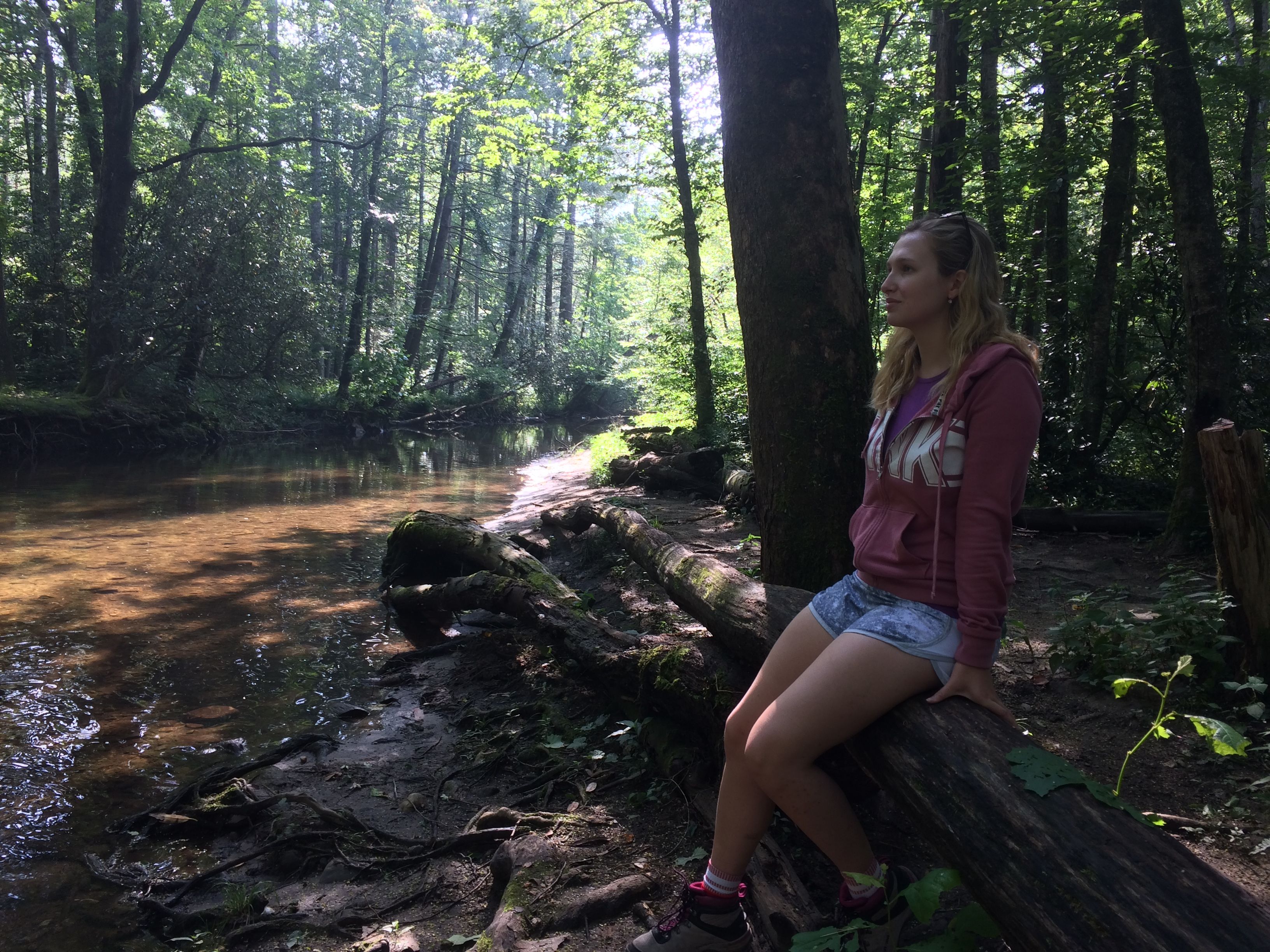 This summer, we wanted to go camping again, so we went back to the same forest, only about two hours away from home. Last year, a never-ending thunderstorm rolled in after dark and drenched us at the top of the mountain. This year, we decided on a day hike and camped closer to civilization so we could leave easily, just in case. Our camp, featuring hammocks, tarps, a fire pit, and Preston!

The trail we went on this year led to a mountain top called John Rock, then looped around to the other side of the parking lot. We made camp about five minutes, or maybe a quarter mile, up from the trailhead. Pro tip: go camping during the week, if possible. You’re more likely to find a campsite, and more likely to have privacy. 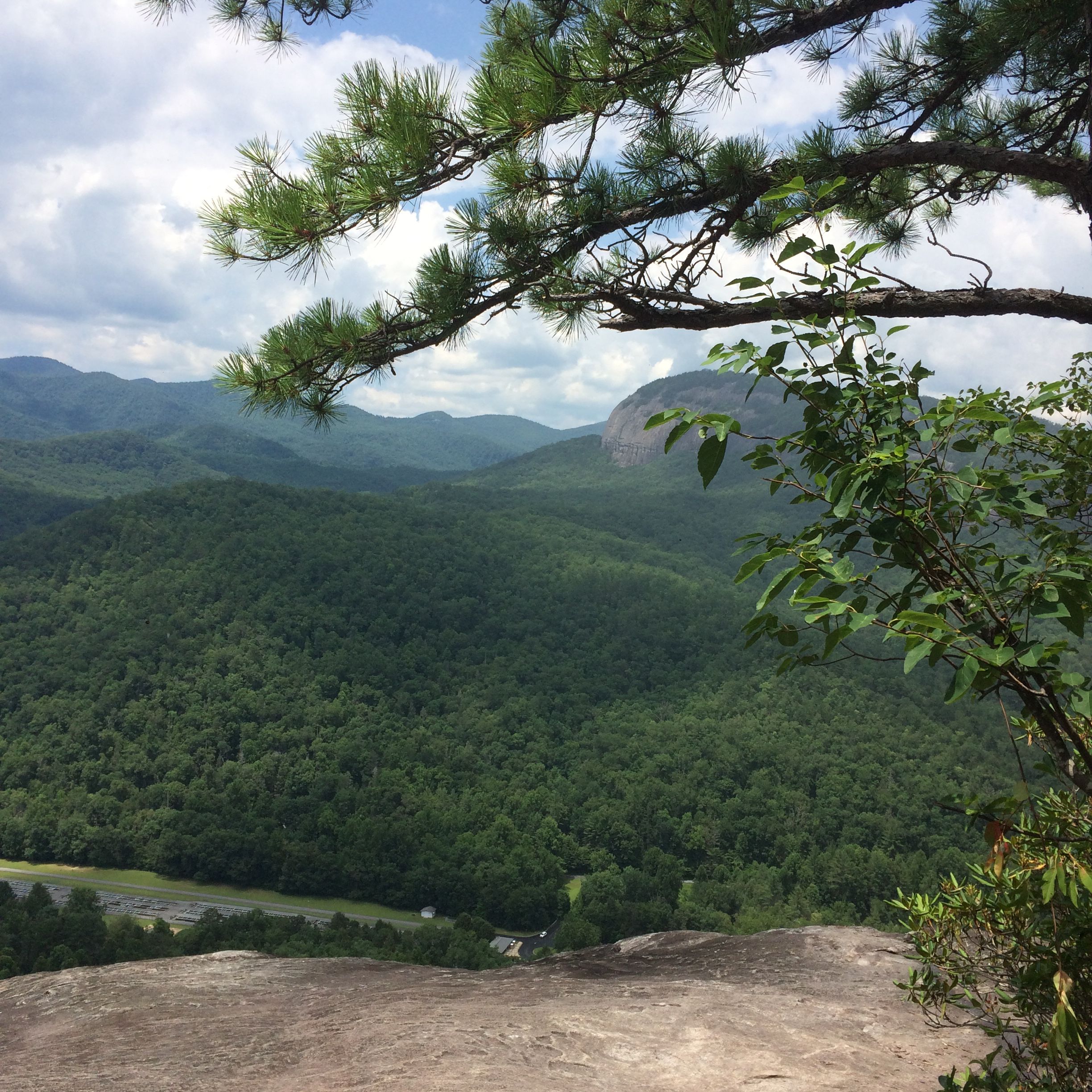 Check it out: at the bottom of the pic, you can see the fish hatchery and parking lot for the trailhead down below!

We made camp and headed up the trail to the rock face. It was a bit strenuous, but the views were amazing. You can even see Looking Glass, where we hiked last year, in the background!

There’s also the feeling of being at the top of a mountain that we always chase. It’s the same feeling you get when you ace that test, land that promotion, or conquer a new goal. You may be climbing a metaphorical mountain, but the view from the top will be amazing.

Heading down to complete the loop held new challenges because the terrain was more rugged. We crossed over some log bridges and kept our eyes out for a waterfall we knew was supposed to be on this trail. We found the place where the stream cascaded over some mountain boulders, so we stopped to enjoy the sight.

After a few minutes, we continued on, and eventually came across some other hikers coming out of the brush next to the trail. We realized there was a narrow, steep path leading down the mountain away from us. “What’s down there?” my boyfriend asked. One of the hikers said, “The waterfall! It’s worth it!” 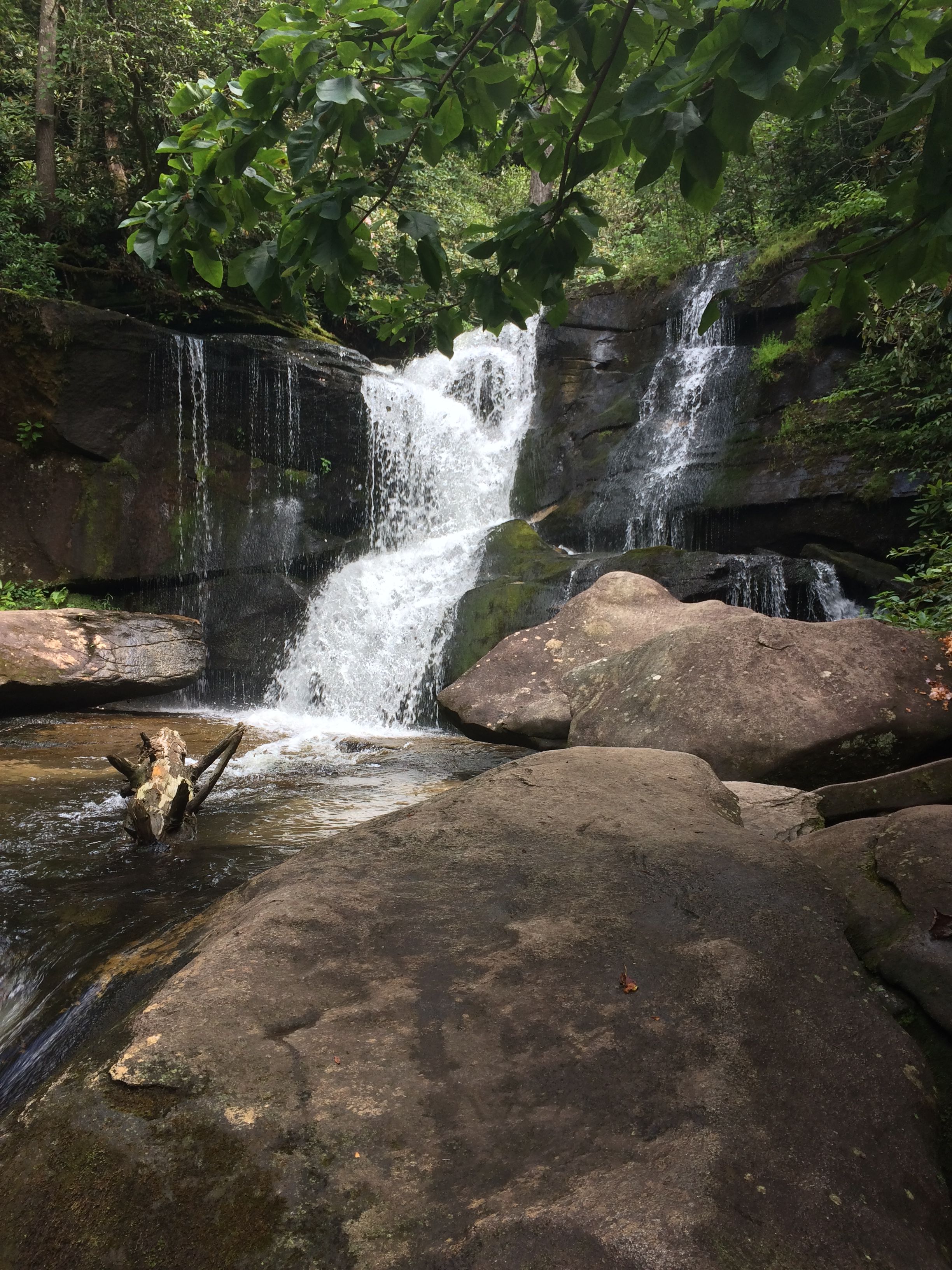 I was surprised, thinking we had already passed a small waterfall. We made our way down the slope, passed a cave, and came out at the real waterfall. Imagine if we had just passed it by!

I admit, if I had been alone, I would have been so focused on the trail ahead that I would have completely missed out. I had an acting teacher last year who always said, “Every moment is a moment.” I used to think, well duh, but now I’m realizing what she meant: you’ll miss out on some of life’s significance and beauty if you’re so focused on the next moment that you miss out on the present one. 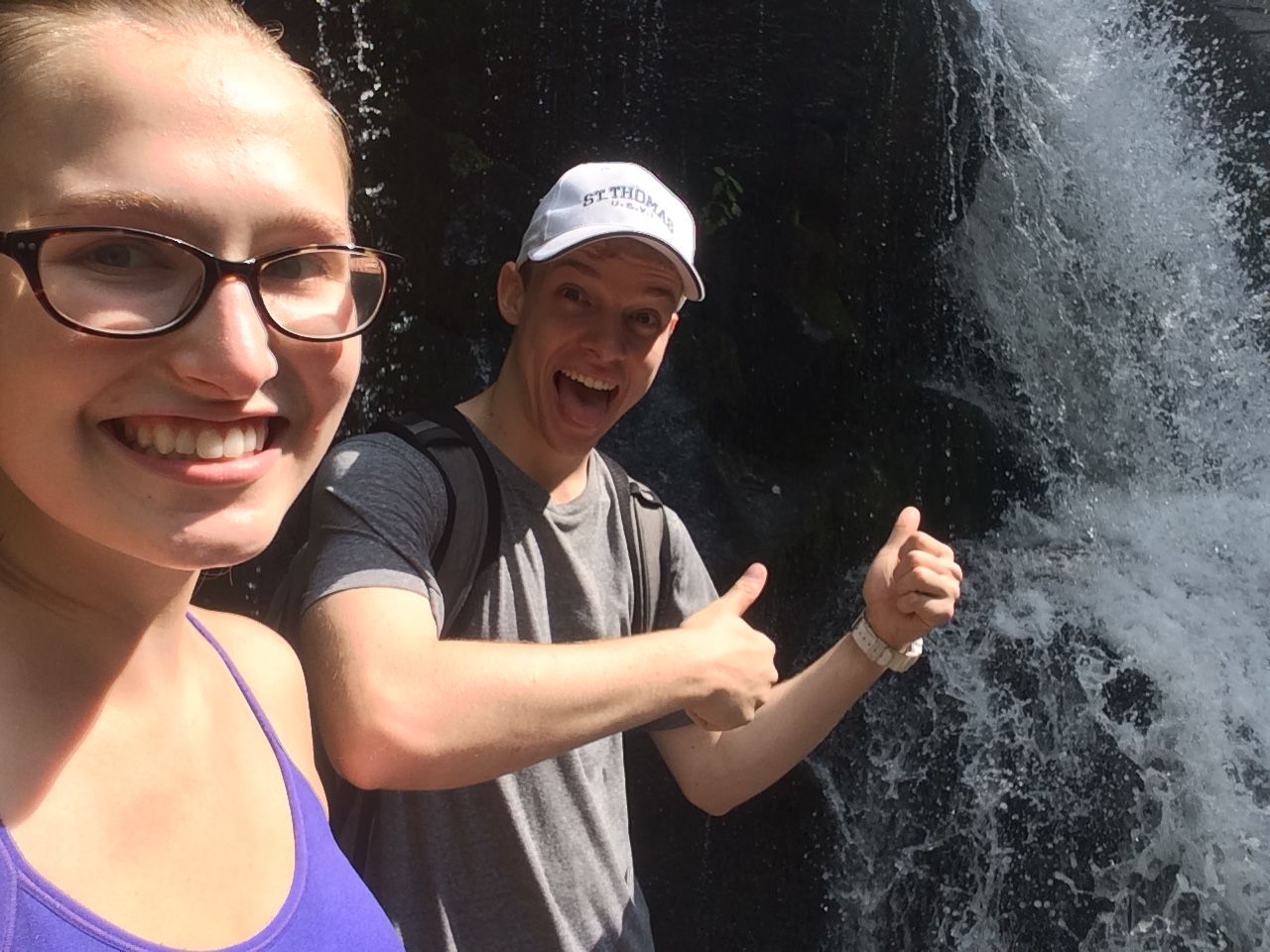 We left the waterfall filled with wonder, and followed the loop back around to our campsite. It was only a few yards away from the Davidson River, which was cool and refreshing to wade in after our sweaty hike. We got a fire going for a little while, cooked dinner, and toasted marshmallows in the twilight. It had rained the day before, so all of the firewood was damp. Our fire gave up on us.

All day, we had kept a close watch on the clouds because we were so wary of rain. By nightfall, the sky was still only partly cloudy, so we took the tarps off of our hammocks and slept under the stars.

I had trouble relaxing enough to really sleep, so I spent hours gazing up through the trees and listening to the sounds of nature around me. The river was babbling, the frogs were singing, and squirrels were shimmying through the brush. I was honored to spend the night in this idyllic scene. 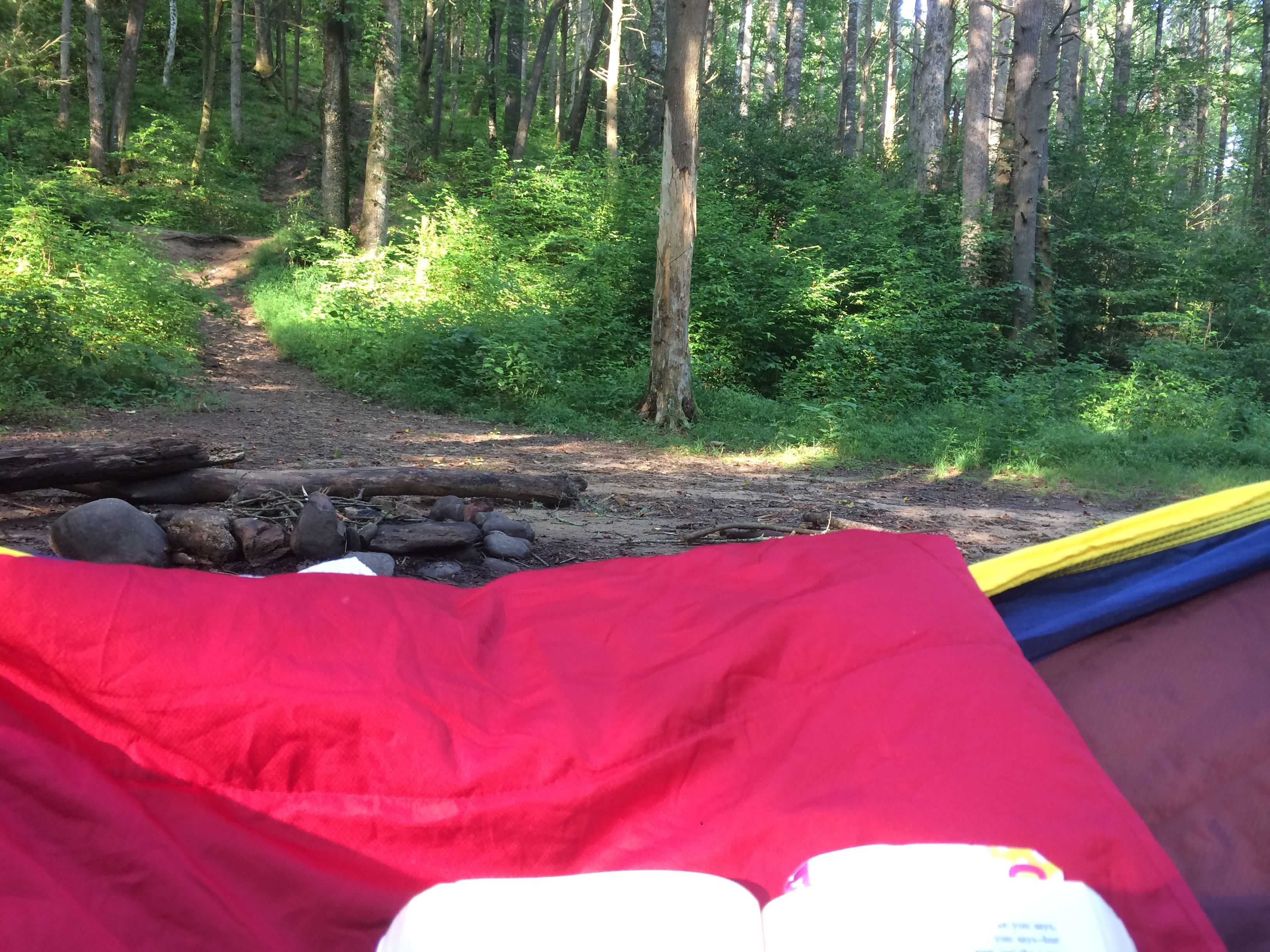 The next morning, the sun came up and I just relaxed, reading in my hammock.

All the way back home, my boyfriend and I kept saying to each other, “I’m really glad we took this trip.” Before long we’ll each be going back to school and to the stress and deadlines of everyday life. For now, it was nice to just spend time reflecting, living simply, and enjoying each other’s company. If you have any camping stories, go ahead and share them in the comments!

nature life camping photography teamcharlotte
3년 전 by ceciliakeirstead55
$20.84
24 votes
댓글 남기기 13
Authors get paid when people like you upvote their post.If you enjoyed what you read here, create your account today and start earning FREE STEEM!
STEEMKR.COM IS SPONSORED BY

I'm glad you guys had a nice camping trip!

It's good to get out and commune with nature. Something about the sights and sounds of water and creatures moving is good for the soul. Thanks for sharing your adventure in words and pics!

Beautiful. Time spent in nature and with nature is priceless. It connects us with ourselves and with the universe.

It really does. Also, I find that no matter how much we like the inventions and efficiencies of modern life, simplicity is really enjoyable, too.

I'm partial to Colorado's mountains but those are gorgeous too!

I would love to visit there someday! We're local to North Carolina, so these are much more reasonable for us (read: cheaper to travel to). I'll just keep Colorado on my bucket list of places to go eventually :)

Such a cute couple!

Thank you! We've been seeing each other since high school and keep finding adventures to go on together!

Now that is a fantastic camping spot! In September we'll be camping for a few days in Vermont and maybe I'll be able to equal some of these pictures with the mountains and the river there, the camping I've been doing recently is not quite as scenic, more woods and trails :)

Ooh, Vermont should be nice in September! The leaves should be changing and the colors will be beautiful! Definitely share those sights with us :) We'd love to see them after you do!

Such a pleasant hike, thanks for sharing this piece of life. Have a great day