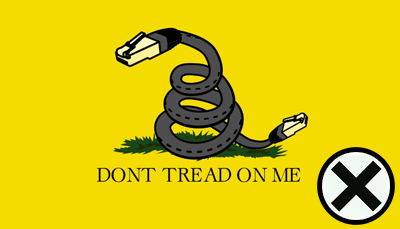 Net Neutrality has been in the news a lot recently, and how repealing it would potentially kill, or at least throttle, the internet. The majority of the conversations across the internet against the repeal have been about the speed with which people would be able to access the internet, and whether or not ISPs would have the ability to sensor certain websites if they choose.

Very little has actually been spoken about what happens to mine and your internet data though. Because ISPs are in a very privileged position within the internet ecosystem I think data privacy and security should be talked about more. As a letter from a privacy advocate group sent to Tom Wheeler, FCC Chairman, in January 2016 states "Their [ISPs] position as Internet gatekeepers gives them a comprehensive view of consumer behavior".

Internet Service Providers across America were unhappy with the changes made to the law so on 06/12/2015 United States Telecom Association, which included Verison, AT&T, and Comcast etc, filed a lawsuit against the FCC challenging the Net Neutrality rule arguing that "the FCC reclassifying broadband carriers as 'common carriers' is an overreach on the part of the FCC". Cable, telecom and wireless Internet providers began to sue in the hope of pushing back on regulations that they said went far beyond the FCC's authority and would have a negative impact on their businesses. In June of the following year US Court of Appeals for the D.C. Circuit upheld the FCC's net neutrality rules and maintained that broadband access is a public utility, rather than a luxury.


10 months after the FCC made the decision to change the status of ISPs on 10/26/2016 the FCC does the right thing and 'Adopts Privacy Rules To Give Broadband Consumers Increased Choice, Transparency And Security For Their Personal Data'

But in march of this year the US Senate voted to nullify the rule that protected citizens data.

Forget the NSA. The US Senate has just landed what is arguably the most serious body-blow to the privacy of ordinary American citizens in the history of the country. It has, in effect, just voted to allow Internet Service Providers (ISPs) to sell or share customers’ detailed web browsing histories and geolocation data with advertisers and partner companies.

The legal changes all stem from the FCC's decision in February 2015 to reclassify home and mobile ISPs as common carriers. The reclassification had numerous effects: it allowed the FCC to impose net neutrality rules, but it also stripped the Federal Trade Commission of its authority over ISPs because the FTC's charter from Congress prohibits the agency from regulating common carriers.

So to summarize, the repeal is to do with whether or not to reclassify ISP's as an information service as it was pre-February 2015, or to keep it as a telecommunications service. The Ars Technica article above goes on to mention that before the February 2015 reclassification of ISPs the FTC could have punished the ISP's for violating customers privacy. So it would appear repealing Net Neutrality rules would mean ISP's would be breaking the law if they were to share personal data with 3rd party companies.

I guess the big question is if the Senate do repeal, what will they be repealing back to? Who knows what to think, after all Soros funds the main pro-Net Neutrality group.

- If You Would Like To Help Me Make More Great Original Content Please Consider Upvoting and Re-Steeming -
netneutrality internet privacy security politics
2년 전 by fortified66
$48.07
68 votes
댓글 남기기 27
Authors get paid when people like you upvote their post.If you enjoyed what you read here, create your account today and start earning FREE STEEM!
STEEMKR.COM IS SPONSORED BY

Most of the data is junk. For example, when you browse steemit, they only see the site name and all else looks like junk. Cause the data is encrypted. They have no idea what you say or type in facebook google or steemit. All three of these are ssl encrypted sites.

I was watching the WAN show at Linus Tech Tips (YouTube/Twitch channel) and heard that an ISP in British Columbia, Canada, blocked all encrypted information a couple of years ago while net neutrality was repealed. It's not a good idea to give power back to ISPs because they want all of your information unencrypted. The ISP doesn't do that anymore, but it's still a possibility for the US.

If it came down to it and someone was throttling or charging more for something like Netflix or YouTube, then someone else would see this as a business opportunity.

Hence, why I pay less for my fiber connection than I was paying for my old Internet connection. Competition drove the price down.

Except the issue is the complete opposite. A start up would likely not have the money to pay the ISPs like Netflix and Google have.

The idea of this is that ISPs throttling the internet actually hurts competition and growing websites by putting them at a disadvantage to those that have the money.

Netflix paid for Comcast upgrade so that they would stop throttling their site.

Amazing what happens when there's a market demand and someone swoops into to fill it. It's almost like businesses seek to serve the interests of potential customers because it's profitable.

That fact that many areas of the USA ISPs have a legal monopoly on broadband service , makes your point totally irrelevant.

The regional monopolies are definitely a problem, but let's fix that problem instead of acting like the US gov will be our saviour, when in fact it only exasperates the problem by raising the barriers to entry on new ISPs.

Net neutrality was a way to spread socialism via the internet ;)

The Ars Technica article above goes on to mention that before the February 2015 reclassification of ISPs the FTC could have punished the ISP's for violating customers privacy. So it would appear repealing Net Neutrality rules would mean ISP's would be breaking the law if they were to share personal data with 3rd party companies.

This can't happen considering you stated our legislative branch voted to allow ISPs to sell our data. They wouldn't be breaching a law and the FCC could not punish them.

The FCC doesn't have the ability to repeal a law passed by the legislative branch.

So ISP's weren't selling customer data before net neutrality in 2015?

It's not that they weren't. It's that the FTC was able to prosecute them for doing so. Now that they're classified as common carriers, there is no such protection in this regard.

It would appear not.

Generally I'm usually in favour of deregulation, but in this case three or four large companies have such a huge monopoly over the industry that the repeal of Net Neutrality would hand them a blank cheque to do whatever they want.

If there was actual competition in the ISP marketplace then a company who is committed to neutrality would rise to the top if regulations were repealed, but sadly that is not the case.

First and foremost, not all data is created equal, and restricting them from offering premium broadband services will result in either throttling across the board or service loss. Secondly, creating a regulatory scheme that requires additional regulatory hurdles to starting an ISP does nothing to improve the situation. Treating internet access as a public utility forces new ISPs to file petitions of necessity to the FCC, which is-you guessed it-run by former telecom executives. Thirdly, it effectively subsidizes companies like Youtube and Netflix, as they're the ones that don't want to have to pay extra to ensure they're delivering their content on the highest speed connection possible. Either way, the cost is passed onto the consumer, either at the ISP end or the provider end.

This is just more bad piled on top of an already bad situation. The aim shouldn't be to exacerbate a problem.

my upvotes shit, but here's a resteem to 6800 people. Hope it helps.

Hey pal. All good my friend. You already do enough for the community. Hope you are well.
Thanks
@fortified

I see you run bots. That's why I assume you were blaming content creators for not using upvote bots to get to the trending page? Conflict of interest I assume. xD

My bots have 8k and 17k respectively. They are tiny. It's not much of a money making operation. HF19 allows these. So, as long as we are here we should use them wisely or the shitposters win.

Most people on the platform seem pretty good with my integrity levels. Thanks for raising this concern tho.

I was just about to publish the latest edition of "The #NewsTeem Digest" when I saw your post. @mooncryption wrote a post about net-neutrality and I was surprised to hear some people argue against it.. I couldn't find a good case against net neutrality on steemit, so I had to find an article from forbes to explain more... anyways, I included a link to your article in the digest because it's very educational, and I'm looking forward to coming back and reading a little more in depth, and offering some comment related to what you posted

Hey thanks for including me.

TBH Im not to sure what to think. I know it's more complicated than they are leading you to believe. Follow the money.

That's why these discussions are important!

After reading this and an article about the subject from LA Times I see that a major issue is going on and making the Internet Neutral seems each timer harder to defend when the persons ruling the FCC are not doing antything to uphold Net Neutrality and making it just another business.

My concerns are that if Net Neutrality gets lost in the United States of America, this will lead a Domino effect in most of the free world specially in third world countries such as mine, Colombia, where since 2011 there are government initiatives which are harmful for the internet consumption in order to follow the guidelines for the Free Trade Agreements in the subjects of Copyright (you can see a search under the Hashtag #LeyLleras but most content is in spanish); my worries about this are that, first we are under a Presidential Race and the person who wants to "Condemn" the internet use in the country is Running for President, if the initiatives are passed that will lead to a major blockade and Net Neutrality will be removed from the country making everything harder for everyone logged in the Net. To worsen things majority of people does not care of this kind of things because are "numb" on Soap Operas and Football.
@aldemarhern